The decision allowed Sydneysiders in the city’s east to spend lockdown lazing on the beach while the west was under near-martial law with a military-enforced curfew.

But Chief Health Officer Kerry Chant had warned the NSW government to apply the same Covid rules across the whole of Sydney, it has now been revealed.

In an email obtained by Daily Mail Australia, Dr Chant laid out her action plan to combat the surging number of Delta variant Covid cases sweeping through NSW.

The August 14 email sent to NSW health minister Brad Hazzard and health officials explicitly spells out that the same rules should be applied equally across Sydney. 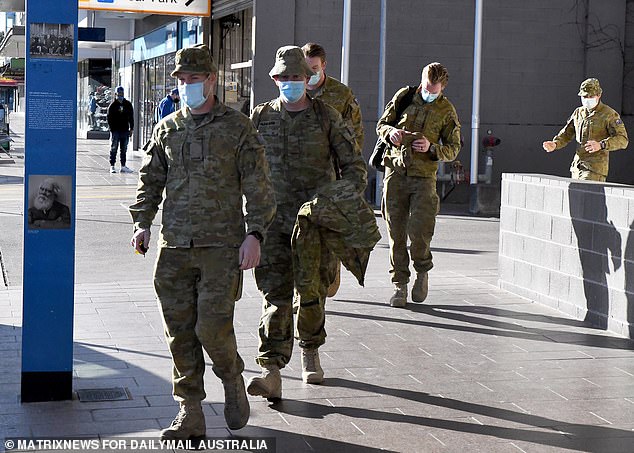 Instead, however, on August 23 the government brought in brutal restrictions for suburbs in the city’s west, while allowing the east to ease through lockdown.

Those in the west faced the sight of ADF personnel on their streets enforcing a draconian lockdown and a 9pm to 5am dystopian curfew, while police helicopters hovered overhead ordering people back into their homes.

But silvertails in Sydney’s east were regularly seen enjoying cocktails in the street and sunbaking on the beach. 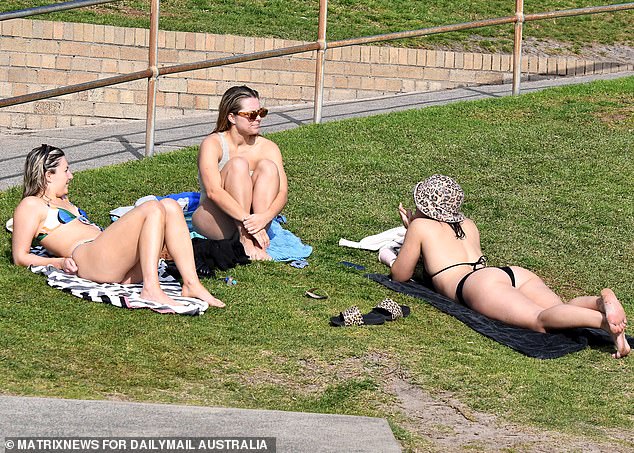 On August 23 the government brought in brutal restrictions for suburbs in the city’s west, while allowing the east to ease through lockdown (pictured, sunseekers enjoy a laidback lockdown in Bronte in Sydney’s eastern suburbs) 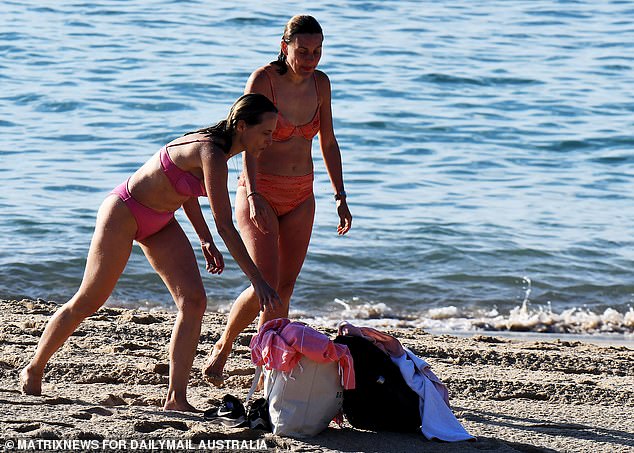 Silvertails in Sydney’s east were regularly seen enjoying cocktails in the street and sunbaking on the beach (pictured, beachgoers at Coogee in August)

In the west, locals were restricted to within 5km of their home while those in the east were only confined to staying within the borders of their LGA, or 5km from home if that was greater.

And for many in the east, that allowed them to travel up to 30km and enjoy the pick of Sydney’s best beaches between Manly and Palm Beach.

The state first went into lockdown on June 26, 10 days after an airport air crew driver became infected and started the outbreak before finally testing positive several days later on June 15.

Initial attempts to contain the disease proved ineffective and numbers continued to rise, prompting the need for tighter restrictions and Dr Chant’s review and recommendations. 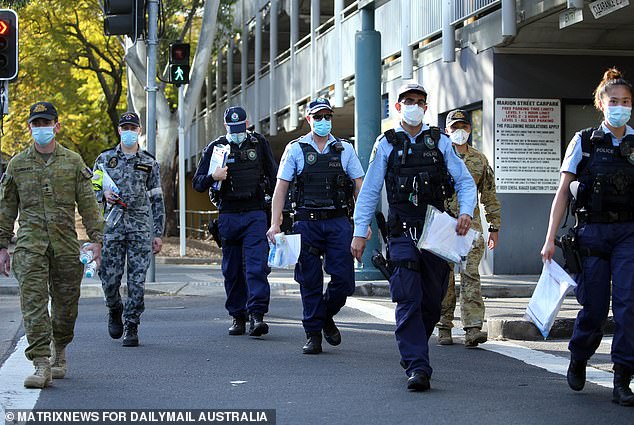 Sydneysiders in the city’s west faced the sight of ADF personnel on their streets enforcing a draconian lockdown and a 9pm to 5am dystopian curfew (pictured, police and military go out on patrol in Bankstown during the Covid curfew) 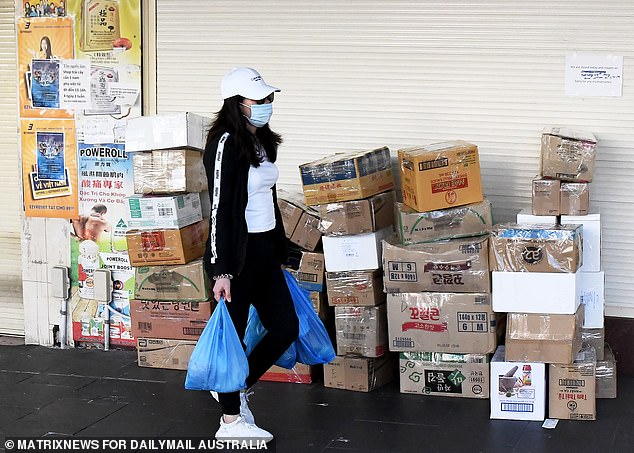 In the west, locals were restricted to within 5km of their home, mandatory masks outdoors and a 9pm to 5am curfew (pictured, a local makes a rare trip to the shops in Bankstown)

Other emails reveal Dr Chant had previously recommended stricter rules in July, including an 8pm curfew, masks indoors and out, closing retail and a 5km travel limit.

Dr Chant based those July 13 recommendations on Victoria’s 2020 lockdown, with a ban on almost everything except takeaway food outlets.

At the time of that email, there were just 99 new cases of Covid that day and the recommendations were not implemented.

Premier Berejiklian repeatedly insisted throughout lockdown that the government was acting on the health advice they had been given.

By the time of Dr Chant’s email on August 14 demanding action across the whole city, there were 469 new cases that day throughout the state.

Numbers continued to rise until the outbreak hit a peak in mid-September when numbers soared past 1600 and hospitals started to buckle under the caseload. 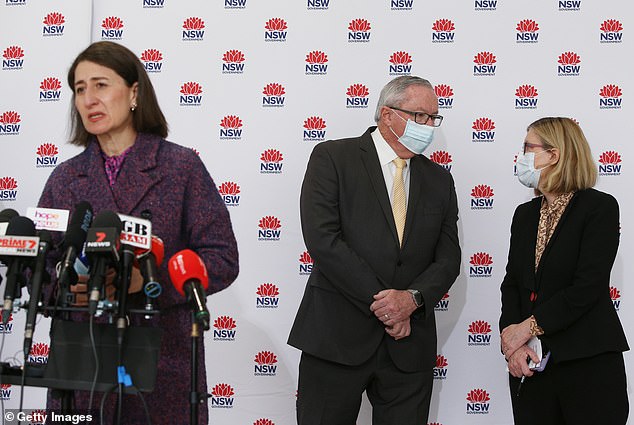 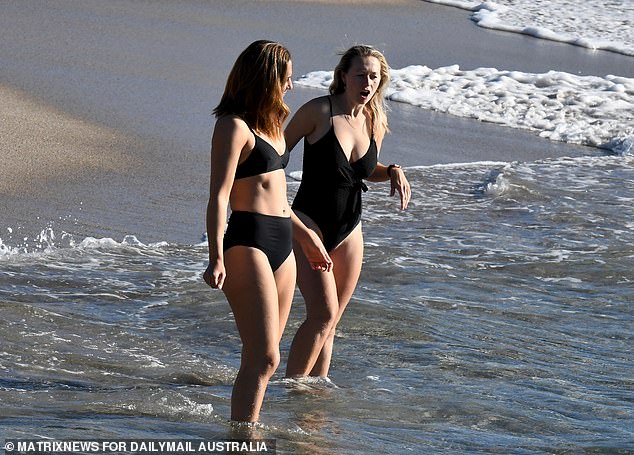 The Labor opposition in NSW has seized on the emails as evidence of the two tier lockdown (pictured, lockdown life in Bronte in August)

‘NSW residents put their trust in this Liberal-National Government to follow the health advice during a time of crisis,’ said NSW Labor leader Chris Minns.

‘These documents reveal the government was not following health advice when they needed it most.

‘These revelations show they left Sydney’s west and south west in tougher restrictions when it is clear consistency should have been applied across the whole of greater Sydney.’

He said the communities in the west had paid a heavy price for the two-tier approach. 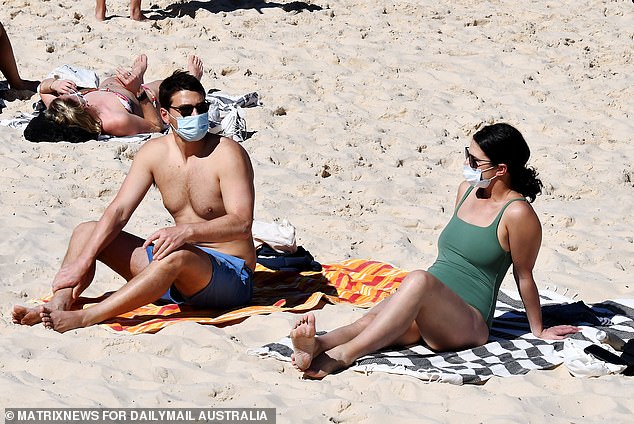 Silvertails in the Sydney’s east were regularly seen enjoying cocktails in the street and sunbaking on the beach (pictured, people relaxing at Sydney’s Bondi Beach) 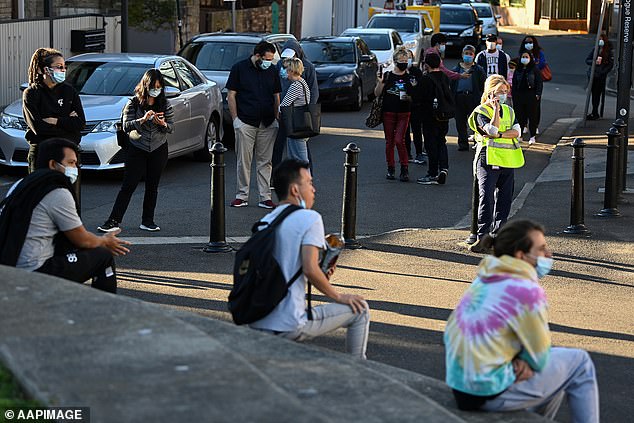 Locals in Sydney’s west faced some of the harshest lockdown conditions in the world (pictured, people queue outside a vaccination clinic in Glebe in August)

‘Businesses across South West and Western Sydney were forced to shut, and revenue decimated,’ he said.

‘Students missed face to face learning at the most critical of times.

‘Some of the harshest restrictions the country has seen were imposed on Western Sydney communities.

‘The Government with Dominic Perrottet front and centre split Sydney in two, when there should not have been a divide.’ 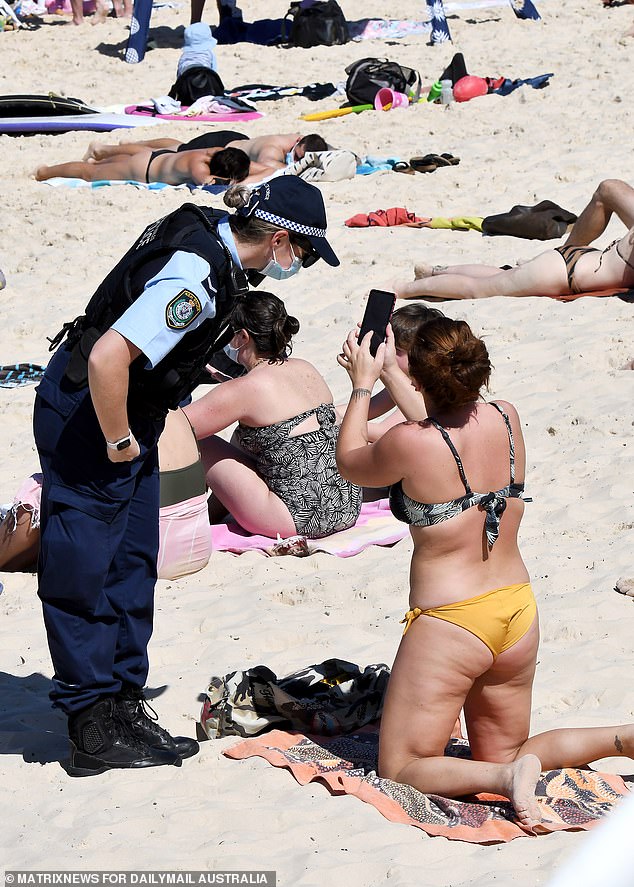 And for many in the east, that allowed them to travel up to 30km and enjoy the pick of Sydney’s best beaches between Manly and Palm Beach (pictured, police check on sunbakers at Bondi) 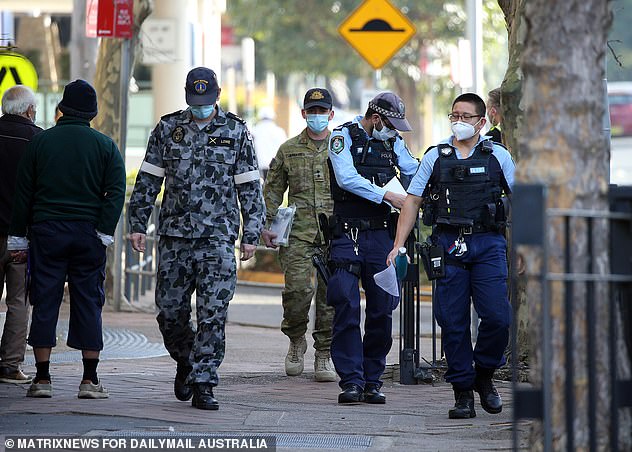 Residents in the west were restricted to within 5km of their home and only essential travel, with restrictions enforced by police and military (pictured)

Shadow health minister Ryan Park said the email had exposed the differing standards applied to Sydneysiders based on the postcodes of where they lived.

‘We were told we were all in this together, but for the Liberal government, that was never true,’ he said.

‘These revelations are damning, and Dominic Perrottet and the Liberal government owes west and south west Sydney an explanation and an apology.

‘Labor repeatedly called for the health advice to be released – the government refused. Now we can see why.’

From: Kerry Chant (Ministry of Health)

Case numbers are high and are escalating and likely to reach 1000 cases a day very quickly. At these case numbers the effectiveness of contact tracing declines rapidly.

This is the worst outbreak in Australia during the Pandemic.

Whilst Victoria had a peak of around 700 cases it then declined with the measures in place whilst we are seeing steadily escalating cases numbers despite current settings.

There is a particular concern about cases escalating in Western NSW and Far West and also Western Sydney and areas of Nepean Blue Mountains.

With the Delta variant, infection rates are higher especially and at time of detection the majority of household members are positive leading to further transmission.

People are sicker and more people are being admitted to ICU and hospital.

1. Intensify the action in Western Sydney and Nepean Blue Mountains where case numbers are escalating

2. Intensify the action in all rural and regional Aboriginal communities with a high proportion of Aboriginal people and prioritise vaccine rollout in these communities

CCC only authorised workers can use Child Care

All retail closed except for food and alcohol and other absolute essentials – click and collect for hardware and building supplies, landscaping materials, garden and plant centres, office supplies and pet supplies

Identify opportunities to reduce non-essential activity in manufacturing/construction. This would have the additional benefit of allowing workplace surveillance and immunisation controls to put in place and scaled.

1 hour of exercise per day

5. Assessment by police to identify any additional measures deem necessary to control movements and gatherings

8. Urgently extend the isolation payment to all LGAs of concern

1. Based on careful consideration of the risks and consequences a regional lockdown is recommended in line with the restrictions in Sydney in order to protect the regions from further seeding events and minimise spread from already impacted regional areas

3. Police advice on additional measures to stop movement of people from metropolitan areas is sought to create additional controls

I would also suggest an urgent pause of overseas arrivals to free up lab testing capacity and accommodation assets – both of these are currently at capacity.