Queensland new Covid cases drop by HALF to just 9,581 after the start of school was pushed back a fortnight – but here’s why the number of infections is actually MUCH higher

Queensland’s new Covid cases have plunged by half to 9581 – but are expected to surge after a software glitch saw the results from four pathology labs omitted from the daily figures.

There are now 419 people across the state in hospital, including 21 in ICU, with health experts predicting the numbers will rise in coming weeks.

The Queensland government said Monday’s case tally is yet to be finalised as the state’s health department awaits the results from several private pathology clinics.

The results were not available on Monday morning due to a technological failure, with authorities anticipating the number of infections within the community to be much higher.

It comes as Queensland’s delay of its school year could be extended as the Covid vaccine rollout begins for five to 11-year-olds with the state’s outbreak topping 80,500 cases.

Queensland has recorded 9581 new Covid cases – almost half of the 18,000 reported Sunday – as authorities brace for infection numbers to surge after a glitch saw results from four labs omitted from the daily figures

The state government announced on Sunday it would delay the January 24 return of classes for most students until February 7 after recording 18,000 new virus cases.

Year 11 and 12 students will start online learning on January 31 ahead of the expected return.

However, she has warned that the return could be impacted by tight vaccine supplies or high cases among school staff. 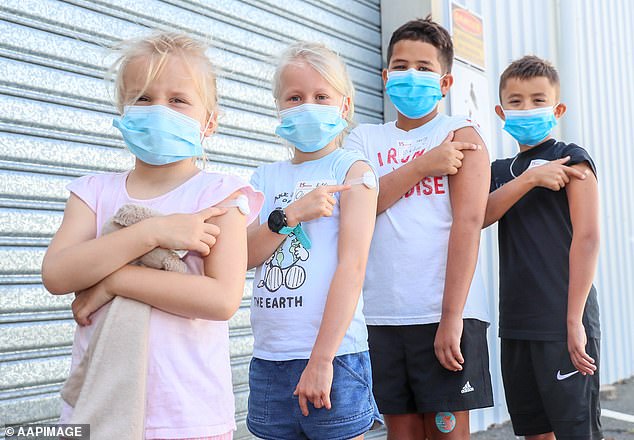 Ms Palaszczuk on Sunday confirmed the new school year would be pushed back two weeks to February 7 as concerns mount over sending children back to the classrooms. Pictured are children who received their first Covid jab at Brisbane’s Kippa Ring Communication Vaccination Clinic on Monday

‘But at this stage, we’re hoping that we’ll get over the peak of Queensland, that the two weeks will be sufficient and we’ll have face to face (learning) as soon as possible.’

Deputy Police Commissioner and vaccine coordinator Shane Delepy said the vaccine rollout for about 478,000 five to 11-year-olds was underway in the state.

He said it was a logistical challenge before younger children needed a smaller dose than adults and because there has already been supply issues.

‘The whole system is under pressure, and we’re seeing that outside of vaccines as well,’ Mr Chelepy said.

The deputy commissioner also said 12 to 15-year-olds were still behind the state average of 91.10 per cent of Queenslanders who’ve had one dose of a vaccine and 87.67 per cent fully vaccinated.

‘We’re still seeing daily more first doses from that cohort, and I think we just got to recognise that cohort started a bit later’, Mr Chelepy said.

Meanwhile, Ms Grace said the government had considered allowing all children above the age of 11 to return to online learning on January 24, like those in Year 11 and 12, but staff shortages made that too difficult. 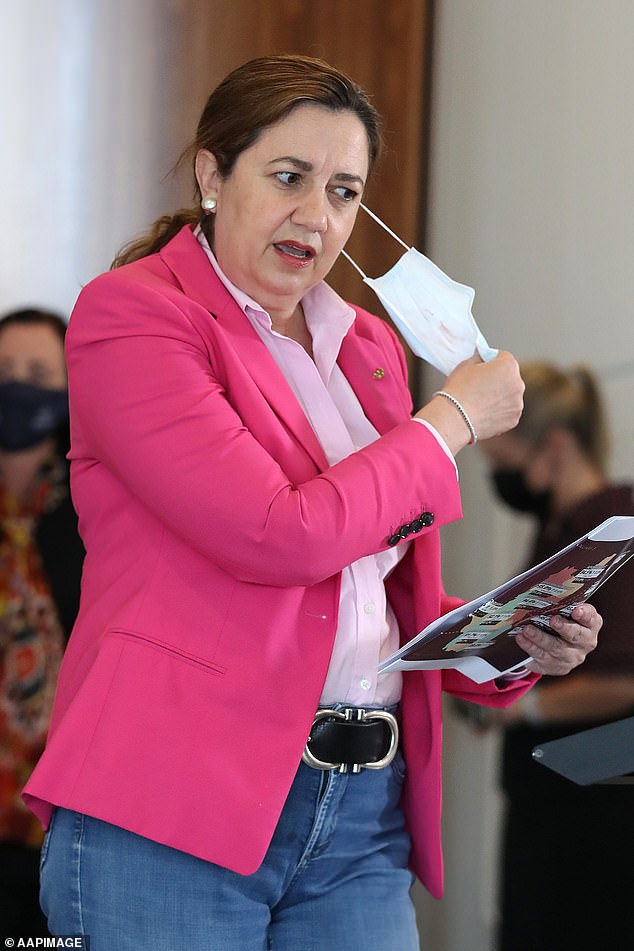 Industries were facing staff shortages nationwide, she said, with thousands of people in isolation with Covid-19 or quarantining as close contacts.

‘We really make want to make sure that we keep our schools as safe as possible, we make sure that we staff them to the level that we need to, so for example, if I’ve got one in four teachers off sick, it’s very hard to deliver education if that is the case,’ the minister said.

On Sunday, there were 422 people being treated for Covid in Queensland hospitals with 22 in ICU and five of those on ventilators.

Chief health officer John Gerrard said while those numbers were low, they would start to ‘escalate substantially’ in the next seven days.

‘So we’re talking in the thousands … and I’ve said that before,’ Dr Gerrard told reporters on Sunday.