Lockdown-weary Australians desperate for a break from housebound humdrum are snapping up every last summer holiday booking on the Great Barrier Reef.

Hamilton Island is almost completely booked out over December and January after the Queensland Government finally threw open its borders to travellers again.

The school holidays rush was prompted by the state announcing restrictions would relax entirely for fully vaccinated Christmas travellers.

From November 19, unless you are coming from a hotspot, vaccinated travellers will be able to enter Queensland without quarantining.

And from December 17, even those from hotspots will be able to enter the state so long as they are vaccinated and test negative in the 72 hours before arriving.

Now Australians across the country are booking their slice of summer paradise after almost two years of Covid hell.

And Sydneysiders with cabin fever are at the head of the queue for a tropical Christmas.

‘We had a surge of bookings from New South Wales after the announcement on Queensland’s border re-opening,’ Hamilton Island chief executive Glenn Bourke told the Courier-Mail.

‘With international tourism restricted, Australians have fallen back in love with our own backyard and there’s no backyard quite like Hamilton Island.’

Although Hamilton Island is all but booked out, the state still has other island escapes for sunseekers, including luxury five-star resort Hayman Island, pictured here

The plan to re-open Queensland is based on vaccination rates, with the first easing kicking in when the state is predicted to hit 70 per cent, and then eased further a month later once the state hits 80 per cent.

Queensland is lagging behind almost the every other state in Australia in its vaccine rollout, having only just broken the 60 per cent double-dose mark this weekend, and single doses still under 75 per cent.

Only Western Australia has a lower rate at 59.3 per cent, with the national figure now tracking at 73 per cent fully vaccinated and single doses almost 87 per cent.

Queensland managed to maintain a zero Covid case tally on Sunday despite the discovery of two car loads of travellers who had sneaked over the border. 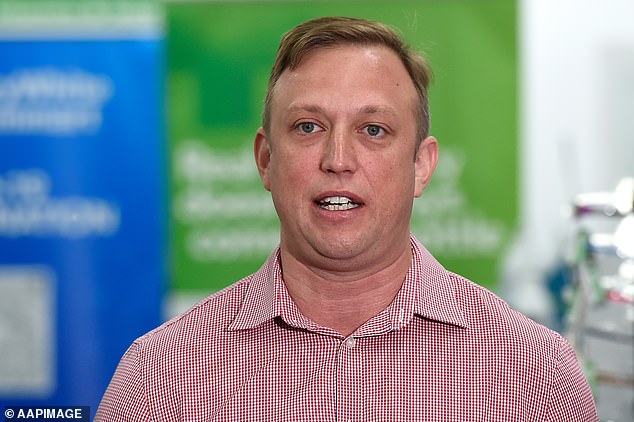 Queensland managed to maintain a zero Covid case tally on Sunday despite the discovery of two car loads of travellers who had sneaked over the border, revealed the state’s deputy premier Steven Miles, seen here

They had travelled around several outback Queensland communities before they were kicked out the state, and two of them later tested positive once back in NSW.

‘It really just underlines how close this virus is to our border,’ deputy Queensland premier Steven Miles said.

Holidaymakers were urged to book early if they want to have a spot in a tropical paradise for their holidays in 2022.

Although Hamilton Island is all but booked out, the state still has other island escapes for sunseekers including Daydream Island, Great Keppel Island and Magnetic Island.

But for those who have big budgets, Hayman and Bedarra Islands could be the ultimate destinations. 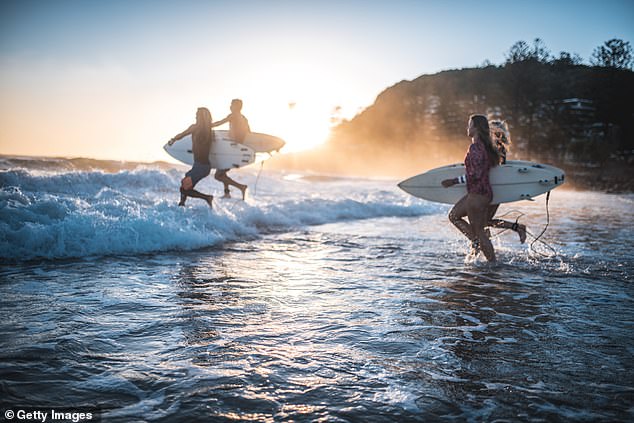 Holidaymakers across Australia are now being urged to book early if they want to have a spot in a tropical paradise for their holidays in 2022. (Pictured, surfers at dawn in Queensland)

Hayman is a one-resort island accessible only by helicopter, luxury yacht or seaplane and boasts five star luxury with a giant pool you can dive in direct from some rooms.

Lesser-known Bedarra – an all-inclusive resort with luxury rentals and a spectacular villa – is possibly the most elite hideaway.

‘When you simply do not wish to be found, when you need to escape and unwind, there is no better place to disappear than Bedarra,’ its website brags.

‘Bedarra is an all-inclusive, private, tropical haven – Australia’s most unique resort and the ultimate in barefoot luxury.’

Prices start at $1,390 a night and go up to $2,790 a night…and just transferring by helicopter from Cairns Airport to the resort will cost you an extra $2,500 each.

Even at those prices though, the earliest you can book a week at the priciest Point Villa on the island is January 2023.