New South Wales is set to begin a trial of a seven-day home quarantine for fully-vaccinated international returns as the state recorded 1,284 new cases of Covid-19 and 12 deaths on Friday.

It was announced 175 fully-vaccinated people will take part in the test of the new system which will slash the time required for returned travellers to isolate.

The four-week trial will begin at the end of September and will eventually replace the current requirement of two weeks in hotel quarantine.

New South Wales is set to begin a trial of a seven-day home quarantine for fully-vaccinated international returns as the state recorded 1,284 new cases of Covid-19 and 12 deaths (pictured, a resident in Sydney) 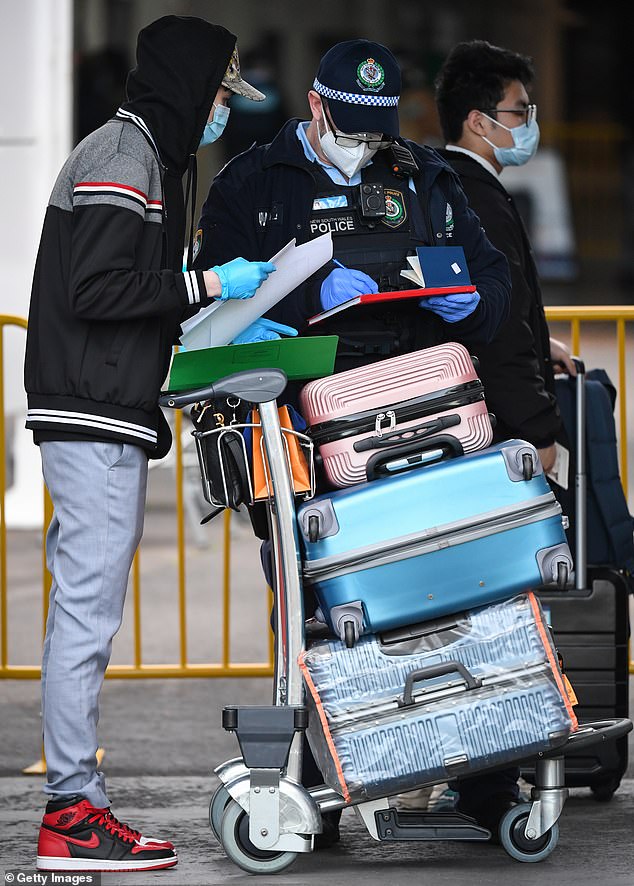 It was announced 175 fully-vaccinated people will take part in the test of the new system which will slash the time required for returned travellers to isolate (pictured, a passenger in Sydney)

NSW Tourism Minister Stuart Ayres said 30 people a week would take part in the trial with different types of accomodation, age groups and conditions to be tested.

Excluding Qantas crew members, 125 people will take part in the test and will be transported from the airport to their homes by health authorities.

He said police will be able to monitor people in home quarantine using technology like location-based smartphone settings and facial recognition.

‘We want to expand the amount of people who can come back to Sydney as quickly as possible. We want Australians is coming back through Sydney airport, we want international tourists coming through Sydney,’ he said.

Mr Ayres reiterated that the home quarantine trial would only be extended to fully-vaccinated people with TGA approved vaccines who lived in NSW.

Participants in the test will be selected before they arrive in Australia and will not be charged for the home quarantine.

The system will be available to the broader public once 80 per cent of the population have received two doses of a Covid-19 vaccine.

The benchmark of 50 per cent of eligible adults fully-jabbed was expected to be reached on Friday. As it stands, 49.6 per cent of people have received two jabs.

International travellers returning to Australia are currently required to quarantine for two weeks in a hotel. 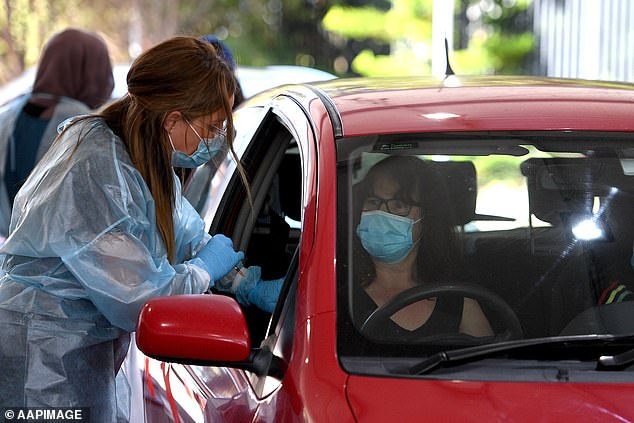 There are currently 1245 cases of Covid-19 in hospital, 228 people in intensive care, and 112 people requiring ventilation (pictured, people receiving a vaccine at a pop-up drive in Sydney on Friday) 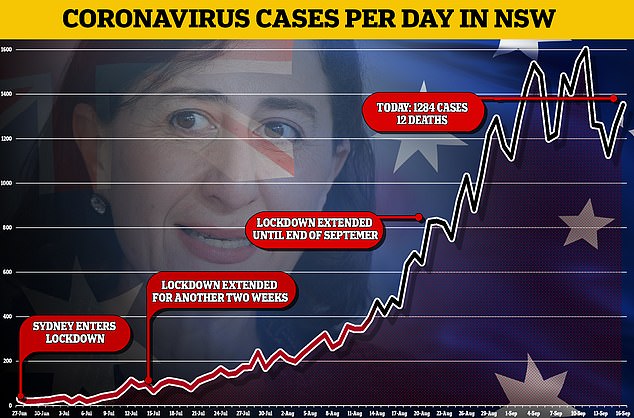 ‘One of the things that we obviously expect to occur at 80 per cent double dose is to consider our international borders,’ Ms Berejiklian said.

‘That is Aussies coming back home through Sydney Airport, but also our citizens having the opportunity to go overseas where previously they weren’t able to.’

Of the twelve new deaths recorded on Friday, six were men and six were women, two of whom were aged in their 20s.

One of the women aged in her 20s was from western Sydney and died at Nepean Hospital. She had received one dose of a Covid-19 vaccine and had underlying health conditions.

The other woman aged in her 20s died at Gosford Hospital and was not vaccinated.  She was a resident of the Life Without Barriers group home in Wyong, where she acquired her infection.

There are currently 1245 cases of Covid-19 in hospital, 228 people in intensive care, and 112 people requiring ventilation.

Across NSW, 80.7 per cent of the over-16 population has received a first dose COVID-19 vaccine, and 49.6 per cent are fully vaccinated.

It comes as twelve country towns were released from lockdown at 1pm on Thursday but residents were urged to remain vigilant while enjoying their new-found freedom.

However, Lismore and Albury were plunged back into a seven-day lockdown from 6pm on Thursday after too many new cases emerged.

Albury, on the Victorian-NSW border, recorded two mystery cases with ‘possible links to Sydney’ but believed to be unrelated to each other.

One case of coronavirus was detected in Lismore in the state’s north, again with possible links to Sydney, with health officials concerned about exposure in the area.

The country towns coming out of lockdown were deemed low-risk by health officials and have not recorded any cases of the virus for the past two weeks.

Two regional NSW local government areas have been forced back into COVID-19 lockdown as the Labor opposition demands more requests more freedoms for those in virus-hit western Sydney.

Lismore and Albury have re-entered lockdown for at least the next seven days after three cases were detected across the two areas.

The sources of the infections in both regions are unknown but NSW Deputy Chief Health Officer Marianne Gale suspects they are linked to Sydney.

The Lismore case has prompted a shift in the ‘border bubble’ arrangement negotiated days ago by Queensland and NSW, while the effect of Albury’s lockdown on Wodonga is not yet clear.

Wodonga is in Victoria, on the south side of the Murray River.

Just hours before Lismore and Albury were plunged back into lockdown, stay-at-home orders were repealed across 12 other regions.

‘The chief health officer has repeatedly informed the community that the transmission of the Delta variant is far more prevalent in indoor settings so it makes sense for the government to take a look at this,’ opposition health spokesman Ryan Park said on Friday.

‘It still could remain restricted to double vaccinated households but surely spending a few hours outdoors at this very good time is a small way that families can try and get some enjoyment back.’

Deputy Premier John Barilaro on Friday said his government would stick to its ‘measured approach’ for reopening after lockdown.

Meanwhile, a NSW parliamentary inquiry into the state’s outbreak will resume on Friday, focusing on issues in western Sydney.

It comes as NSW reported 1351 new locally acquired cases of Covid-19 and 12 deaths in the 24 hours to 8pm on Wednesday, taking the toll for the three-month virus outbreak past 200.

Twelve people have been diagnosed with Covid-19 across three social housing buildings in inner Sydney’s Redfern. A mobile vaccination team is visiting each tower building to provide vaccinations.

Elsewhere, a man has been charged with the serious assault of another man at a drive-through Covid-19 testing clinic in Auburn.

The 18-year-old man allegedly pulled the 55-year-old male victim from his car and punched and kneed him before driving away.

He will appear at Burwood Local Court later on Friday.