Australia has been branded a ‘fascist state’ on US TV after footage aired on Fox News of the brutal arrest of a Melbourne man for smoking a cigarette.

Show host Lisa Kennedy, 49, mercilessly mocked the nation with a fake Aussie accent as she railed against lockdowns and border closures in pursuit of Covid zero.

And co-host Steve Hilton, 52, labelled Australia ‘insane’, ‘authoritorian’ and ‘draconian’ for its response to the Covid pandemic.

The outrage was sparked after Kennedy played video of police in Melbourne throwing a man to the ground and handcuffing him for smoking without a mask.

The clip, apparently shot in St Kilda on Saturday, shows at least six police swooping on the man as a woman tries to defend him.

‘He has a mask in his pocket, he was just smoking a cigarette, he just came to have lunch with me,’ she says, showing her kebab to the camera. ‘He lives a block away.’

The man adds: ‘I has having a cigarette. I’ve got two masks in my pocket. What else do you want me to do?’

Police insist: ‘He has no valid reason to be here. We told him to move on and he’s not wearing a mask.’

The video incensed Fox News libertarian Kennedy – who is known just by her surname – and sparked a furious on-air rant in her fake Australian drawl.

‘Much of Australia is on month three of another crushing lockdown with citizens getting thrown to the ground for a simple smoke break,’ she raged.

‘The state attacking its own citizens for the crime of…being outside – where Covid doesn’t spread. We’re seeing old ladies get pepper sprayed in Australia

‘And to take one step further, one top official also had a warning for those who refuse the jab, saying life for the unvaccinated is going to be very difficult indefinitely.’

‘The really shocking thing about all this is that most people seem to be okay with this,’ he said.

‘They’ve got this insane conviction that they can now have this kind of zero COVID because they’re an island and they kept it out.

‘They had these incredibly draconian measures in place right at the beginning. And they think they did a good job with that. They think they can keep it up forever.

‘It’s now kind of a self-fulfilling prophecy. They feel they have to keep going with it, even though it’s impossible.’ 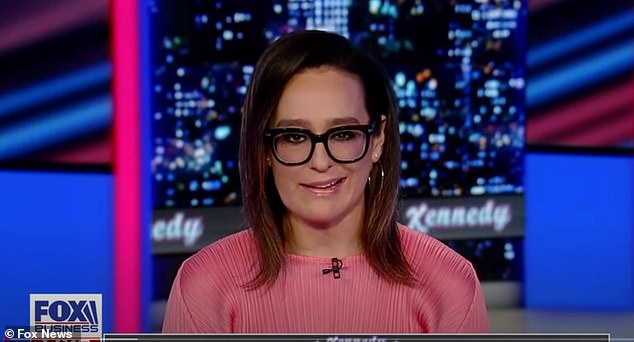 Show host Lisa Kennedy, 49, (pictured) mercilessly mocked the nation with a fake Aussie accent as she railed against lockdowns and border closures in pursuit of Covid zero

He added: ‘That’s why you’ve got these leaders of the different parts of the country imposing these these unbelievable authoritarian tactics.

‘It’s really sad, because we think that it’s actually a fascist state now. It really is. It’s really, really frightening.’

Mr Hilton says that Australia’s reaction to the pandemic could inspire similar crackdowns by other governments around the world.

He added: ‘If there’s not a massive uprising about this, it does give other governments around the world the idea that, you know what, we can get away with this stuff too.’

He insisted the lockdowns in Australia were not working.

Despite the current NSW and Victoria outbreaks, Australia has had just 103,000 Covid cases and less than 1300 deaths. 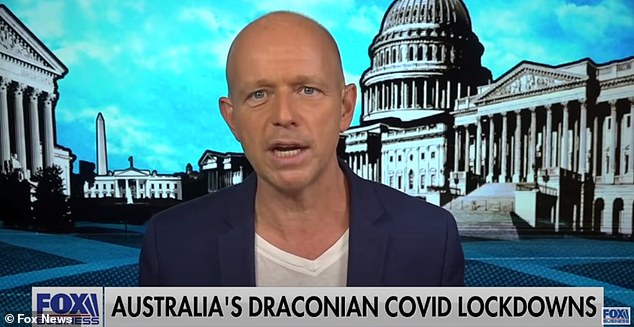 Hilton insisted all restrictions must end and the country opened up. He compared Australia to Florida, which is currently in the midst of a crippling Covid crisis.

‘Either you get there, for example, as Florida did with minimal restrictions, less destruction to people’s lives, to children’s lives, to small businesses and so on,’ he said.

‘Or you get there through these draconian rules.’

Florida, which has a similar population to Australia with 21.48million, has had 3.56million Covid cases and 54,067 deaths.

‘Western Australia, where the city of Perth is, they have no cases they’re free,’ he added. ‘They don’t have the lockdowns, but they’re totally sealed off.

‘You can’t even travel there from the rest of Australia. How long do they think they can keep that going?’

Kennedy added: ‘You can’t do it indefinitely, because they’re going to have another protracted recession. And they can’t afford that.’ 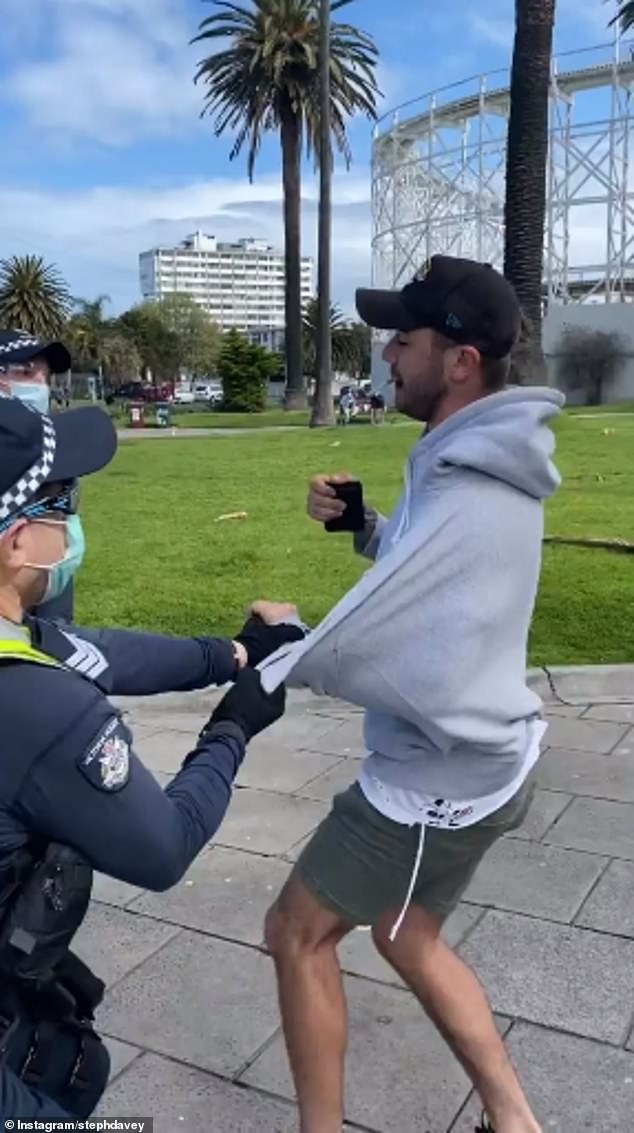 Australia briefly went into a technical recession at the start of the pandemic last year – the first since 1991 – but immediately bounced back with record growth and a booming economy.

‘They did try to hermetically seal the continents,’ said Kennedy. ‘But all it takes is one case of COVID and the the place catches fire.

‘And living with it means no lock downs, because lock downs effectively, they’re not working.’

Victoria Police told Daily Mail Australia a 27 year old man was arrested for not supplying his name and address ‘during protests at a park in St Kilda’.

‘Officers initially spoke to the man and directed he move on from the area about 1.15pm,’ said a spokesman.

‘Shortly after, police observed the man return to the park and approached him to confirm his identity.

‘The man pushed an officer and attempted to run away so police arrested him to confirm his name and address.

‘The man was subsequently issued with a $1,817 infringement notice for failing to comply with the Chief Health Officer directions.

‘Anyone who is not satisfied with the infringement notice they have received can appeal the matter.’