The number of vaccines being delivered could hit more than half a million a day next week as Boris Johnson fulfils his pledge to ramp up delivery.

A document published by the Scottish government – but then removed – suggests as many as 3.8million people could be vaccinated next week in the UK.

This would indicate a doubling of the current vaccination rate and comes as Health Secretary Matt Hancock announced Britain had passed the 3million mark in total.

Yesterday the Mail revealed the UK has a stockpile of about 21million jabs to give out – easily enough to meet the Government’s pledge to vaccinate older and clinically vulnerable people by the spring.

A document published by the Scottish government – but then removed – suggests as many as 3.8million people could be vaccinated next week in the UK. Pictured: A member of the medical team administers a Covid-19 vaccine injection at the NHS vaccination centre in Robertson House, in Stevenage 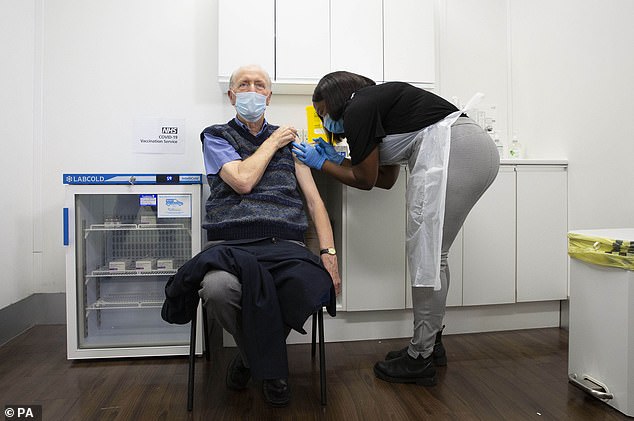 Derek Mersh, 82, from from Bramley, is one of the first people to receive the AstraZeneca/Oxford Covid-19 vaccine at Superdrug, at the high street store in Guildford today

But the document suggests this will be dramatically exceeded next week, when Scotland is due to receive 309,382 doses. If deliveries are evenly spread across the country, this would equate to 3.8million – more than 500,000 per day.

By the end of February, production will have ramped up further with Scotland receiving 443,531 doses a week, suggesting 5.4million will be delivered to the UK.

But the document shows that in some weeks, the supply of vaccines will drastically fall – slowing down the roll-out of the vaccine.

A Government source told the Times the figures in the document are a ‘reasonable best-case scenario’.

‘[They] suggest that we are easily going to meet our target, but there isn’t a lot of headroom there,’ they said. ‘It’s a competitive market and things can go wrong in the production process.’ 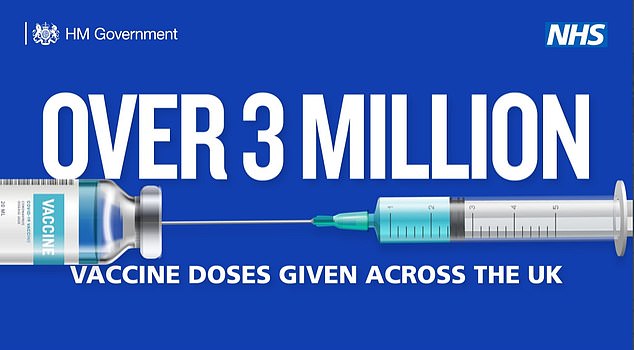 By the end of February, production will have ramped up further with Scotland 443,531 doses a week, suggesting 5.4million will be delivered to the UK

But the UK Government has repeatedly refused to publish the figures amid concerns other nations will ‘gazump’ the UK and put pressure on vaccine manufacturers if they know how much is being deployed on a weekly basis.

‘It’s insane,’ a Government source said. ‘The figures were given to the Scottish government in strictest confidence. It could undermine the entire programme.’

The data suggests there are two weeks when there is no Oxford-AstraZeneca vaccine available, which a source said is due to supply issues.

Under phase one of the vaccination programme, all over-50s and people with serious health conditions will receive the jab.

Ministers have promised that by the middle of February, the top four of the nine groups in phase one will have been vaccinated. 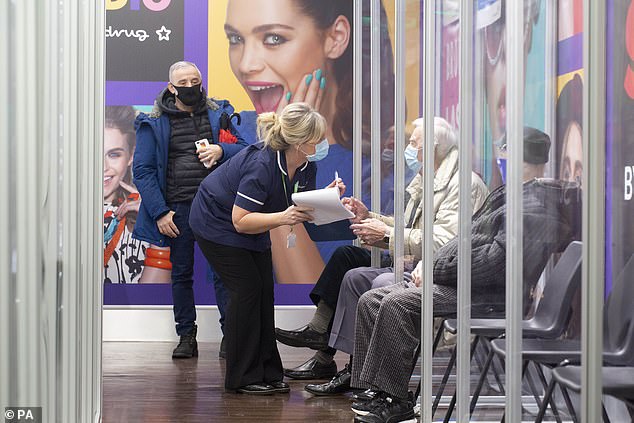 The data suggests there are two weeks when there is no Oxford-AstraZeneca vaccine available, which a source said is due to supply issues. Pictured: Louise Gordon, National Nurse Manager, speaks to patients waiting to receive the AstraZeneca/Oxford Covid-19 vaccine at Superdrug in Guildford

It is hoped everyone in phase one will have received the jab by the spring.

Mr Johnson tweeted: ‘Superb news that we’ve administered over 3million vaccine doses across the UK. Thank you to all who have responded to the call and to the NHS, Armed Forces and volunteers who make it happen. It brings real hope, but it’s critical that for now we #StayHomeSaveLives.’

The Government last night said up to 2,000 people working in crucial roles in the Covid-19 vaccine supply chain will be offered jabs.

The move is designed to help ensure that there is an uninterrupted flow of doses.

AstraZeneca workers will receive the vaccine imminently following a last-minute change of heart by the Department of Health.

Covid outbreaks in care homes are rising amid fears that GPs are reluctant to vaccinate residents in settings with positive cases.

There were 977 suspected outbreaks in care homes reported in the seven days to January 10 – up from 749 the week before, Public Health England data shows.

The surging cases show officials are in a race to vaccinate the most vulnerable or risk a repeat of the thousands of deaths in the first wave. NHS England has urged GPs to administer jabs to care home residents by the end of next week ‘at the latest’.

Payments have been upped to £30 for vaccines delivered in care homes by the end of this week, and £20 for each jab next week. But relatives of some residents have complained that GPs are avoiding care homes with cases.

Joanna Henwood, from Maidenhead, Berkshire, said her 96-year-old father is still waiting to receive the jab in his Devon care home following an outbreak on January 4.

She said staff told her that GPs would administer jabs only once the outbreak had cleared.

NHS guidelines state that GPs are still expected to visit homes where there are cases.