EXPRESS INFORMER > News & Politics > Covid-19 vaccine. A sane man in the White House. Now, if we can just get Brexit over the line

Eureka! Deliverance at last! A vaccine that reportedly can prevent more than 90 per cent of people from getting Covid-19 has been developed by the pharmaceutical giant Pfizer and its German partner BioNTech, and should be available within weeks.

When I read of Pfizer’s chief executive Albert Bourla saying that yesterday was ‘a great day for science and humanity’, I confess that my eyes pricked with tears.

It was a magnificent day for civilisation after what has been the gloomiest and most depressing year for humanity for many decades — almost certainly since the end of World War II.

Lots of people had correctly said that we hadn’t produced a vaccine against the common cold or HIV or malaria despite much effort.

Deliverance at last! A vaccine that reportedly can prevent more than 90 per cent of people from getting Covid-19 has been developed by the pharmaceutical giant Pfizer and its German partner BioNTech, and should be available within weeks

So there was absolutely no reason to be certain that scientists would find a way of driving back Covid-19 into the bat-infested hole that it came from.

The fact that they seem triumphantly to have done so implies — as Sir John Bell, Regius Professor of Medicine at Oxford University, pointed out yesterday — that other vaccines now in development will also be effective. They could provide even greater protection.

God knows, there has been reason enough over recent months to grumble about some of the scientific advice flowing out of Government HQ.

But hurrah for the brilliance and ingenuity of the scientists and companies working around the clock and around the world to defeat the virus!

I don’t say we are out of the woods yet. Of course we’re not. Perhaps the Pfizer vaccine will turn out to be less successful than it is being cracked up to be by those who have a vested interest in extolling its virtues.

Moreover, I expect that when it does become available there will be bottlenecks and queues and consequent complaints as the dear old NHS struggles in its inimitably disordered way to organise tens of millions of jabs.

Nevertheless, this appears to be a breakthrough which history will note, and most of us will remember as long as we live.

Boris Johnson was too downbeat and uncharacteristically Eeyore-ish in his press conference yesterday afternoon, when he stressed that these are ‘very, very early days’.

Yes, they are, but after dark times there is at last cause for optimism. Our spirits, more important even than the stock market, have been sent soaring.

The disease that has laid waste to businesses, destroyed millions of jobs, increased hardship, closed churches, mosques, synagogues, theatres, art galleries and gyms — this terrible pandemic has seemingly been thwarted before it destroys all that we hold dear. 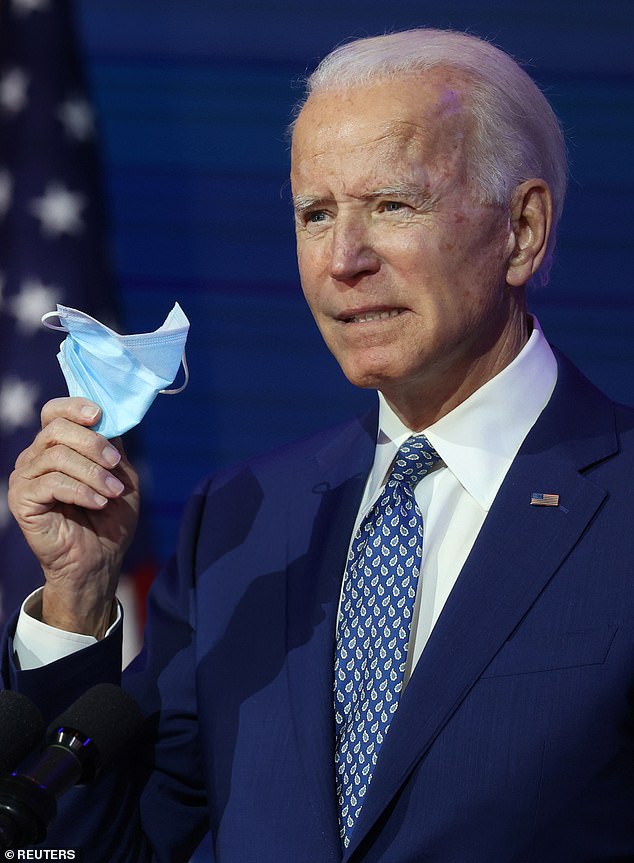 Biden may be sleepy, and not as sharp as he once was, but he is also solid and dependable. Restful, one might almost say. America will take a lead again in those international organisations which Trump either shunned or abandoned. Some of the old stability will be restored

I also suggest — if I may take up the baton from my colleague Alex Brummer, who waxed lyrical in yesterday’s Mail about this country’s sunny medium-term economic prospects — that there are other reasons for peeking hopefully out of the bunker of doom in which our nation has lately gathered.

Needless to say, nothing can match the exhilarating news of the vaccine. But the election of Joe Biden, and the apparent progress, albeit glacial, towards a deal with the EU over Brexit, supply additional reasons for good cheer.

To address Biden first. Doesn’t his impending occupancy of the White House fill you with a sense of calm? Here is a sane, measured and apparently reasonable man after that exhausting and unpredictable showman, Donald Trump.

Admittedly Trump (whose legal manoeuvres are surely bound to fail) is a colourful and mesmerising character. But watching him hasn’t been unlike following the shaky movements of a less than fully competent performer on the high-wire. Constantly nerve-racking.

Biden may be sleepy, and not as sharp as he once was, but he is also solid and dependable. Restful, one might almost say. America will take a lead again in those international organisations which Trump either shunned or abandoned. Some of the old stability will be restored.

I realise, of course, that it is an article of faith in fashionable circles that the anti-Brexit Biden will pick up the phone first to chat to Angela Merkel and Emmanuel Macron, while keeping Boris Johnson hanging on the line.

Maybe he will. But the factors that have served to make Britain and America uniquely close over the past seven decades will almost certainly sooner or later kick in.

After the United States — a long way behind, of course — the United Kingdom makes the second biggest military contribution to Nato. Ties of history, language and culture will inevitably re-assert themselves. Biden will want, and need, to talk to the incumbent in No 10, whoever he may be.

If you don’t believe me, listen to Chris Coons, a close ally of Mr Biden who is tipped for the top job of Secretary of State. On Sunday, Senator Coons said the president-elect did not regard Mr Johnson as a British Trump. He added he had met Mr Johnson and found him ‘more agile, engaging, educated and forward-looking than perhaps the caricature of him in the American press would have suggested’.

Whatever happens, Joe Biden is going to be a soothing presence who will help rebuild the Western alliance. My bet is that he will retain bonds with Britain which will be at least as friendly as those entertained by the maverick Donald Trump.

And what of Brexit? Could talks with the EU’s Michel Barnier, which restarted in London yesterday, lead to a third reason for celebration, and enable the nation to enjoy a happy Christmas?

Reading the runes of these negotiations has been tricky. Neither side wishes to appear too optimistic for fear of giving the impression it is so desperate to reach an agreement that it will give ground. 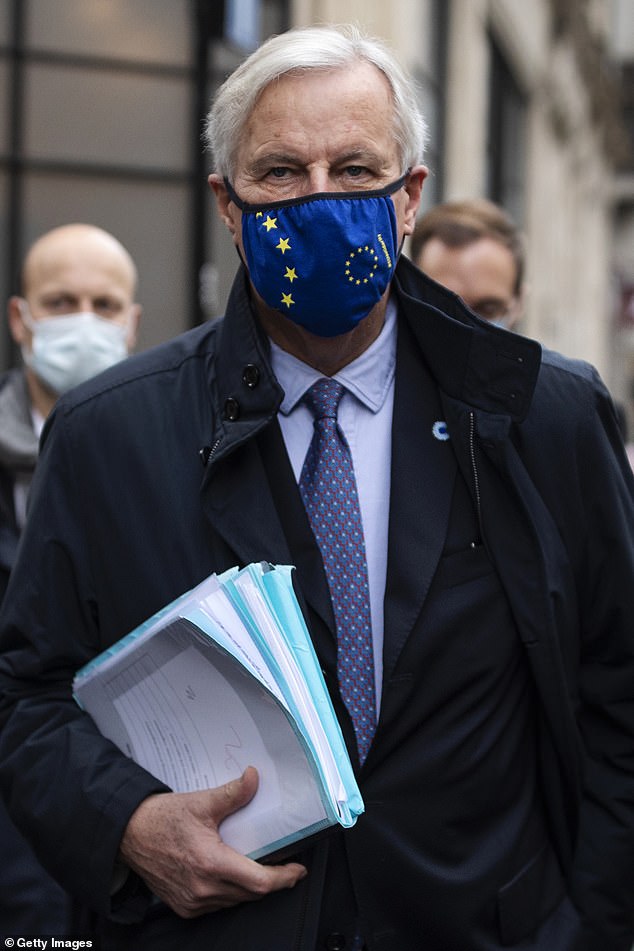 And what of Brexit? Could talks with the EU’s Michel Barnier, which restarted in London yesterday, lead to a third reason for celebration, and enable the nation to enjoy a happy Christmas?

All the same, the Prime Minister permitted himself the observation on Sunday that a trade deal with the EU is ‘there to be done [and] the broad outlines are pretty clear’.

Time is running out, and a deal has to be struck in the next week or so if we are to cut adrift from the EU by the end of the year, as we must do. The chances are that an agreement will be reached.

The Government may have talked tough over recent months, but Mr Johnson knows that a chaotic No Deal would damage many businesses when the British economy is already on the ropes. There will be compromises, and a few of them will make hard-line Brexiteers squeal with rage.

So maybe we will enter 2021 with Covid-19 on the retreat — and with mass testing, now being tried out in Liverpool, successfully deployed. Perhaps, with the removal of Trump, greater international stability will beckon. And possibly the long saga of Brexit will have finally drawn to a satisfactory conclusion.

I don’t doubt daunting problems will remain. It could take years to revive the economy. The pandemic has served to tear the Union further apart, and given Nicola Sturgeon an unfettered trial run as Prime Minister of an independent Scotland.

Nor, to be frank, am I brimming with confidence that our indecisive, blundering, U-turning Government will suddenly see the error of its ways and start to demonstrate competence and good sense.

There will be difficulties, certainly. That’s life. But after this most dreadful of years, I am beginning to think that our national fortunes are changing, and much happier times lie ahead.