When a blanket ban on care home visits was imposed in March as the coronavirus pandemic took hold of the country, elderly residents were dealt the shock of loved-ones suddenly vanishing from their lives.

Eight months on, they are still forbidden from holding hands with their husbands and wives or hugging their sons and daughters.

The most they can hope for is the chance to wave at family through a window or prison-style screen. Some families are still being denied any visits at all.

Residents suffered cruelly in the spring when infectious hospital patients were discharged into the system, allowing the virus to tear through homes – and costing thousands of lives. But since the first wave subsided, a second deadly tragedy has been slowly unfolding.

While the rest of us regained some normality – dining out at restaurants, reuniting with friends, going on holiday – elderly residents remained cut off from the outside world.

They say they feel incarcerated, like zoo animals who can only be stared at through a protective barrier.

Pictured: Care home resident Dave Stallard being visited by his wife Irene – who used to visit his twice a day indoors but now has to see him from the side of the road

Many have simply given up on life, with non-Covid deaths soaring in care homes, where more than 410,000 people live. Thousands are feared to have died from conditions other than Covid-19, brought on by inadequate medical care and a lack of social contact.

Isolation is known to speed up the progression of dementia, leading to an extra 5,000 deaths during lockdown.

Separate research shows that many of those living in care homes stopped eating or drinking at some point since the pandemic began, and care home managers have reported watching residents growing increasingly distressed.

While the crisis has been deepening, tens of thousands of families have started calling for relatives of care home residents to be granted key worker status, allowing them regular priority testing that would make in-person visits safe.

The situation is heartbreaking for family members, who worry that they will never see their mothers and fathers alive again, their final months spent in aching loneliness rather than surrounded by love.

Husbands and wives of people with dementia worry that when they are finally reunited, their partner will no longer recognise them — their lifelong memories extinguished by the months spent apart. On these pages we share some of their stories. 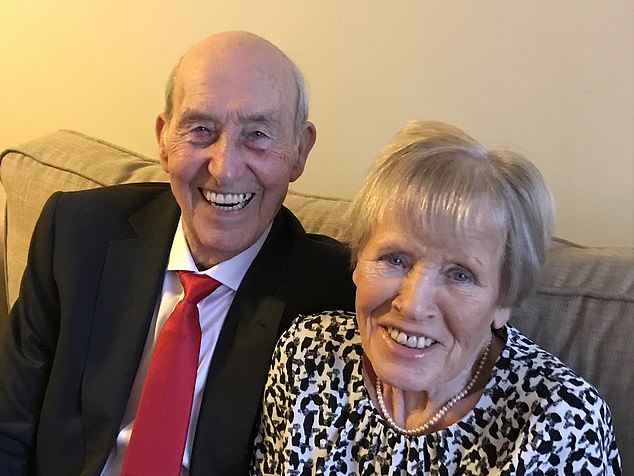 Eddie McEwan (pictured with his wife, Rose), 85, served Britain all his working life, spending 22 years in the Royal Air Force and another decade in the fire service

Eddie McEwan served Britain all his working life, spending 22 years in the Royal Air Force and another decade in the fire service.

But now the 85-year-old, who struggles to speak or communicate following a stroke, has been made to feel like a prisoner.

His daughter Mhairi lives just five minutes away from his care home in south-west London, but was unable to see him for months.

She said: ‘I went from seeing him every week and taking him for lunch and walks, to not being able to communicate at all.

‘We couldn’t do Zoom calls because he can’t speak or talk on the phone. He has been so isolated, and it means his condition has deteriorated. My dad is an incredibly strong, brave and determined gentleman. But he is not allowed fresh air, he is not allowed to have a life.

‘It is absolutely heartbreaking. People with dementia or other disabilities need to see and touch their family to feel loved. That is being denied to them. The visiting rules are utterly cruel and disproportionate.

Miss McEwan, 59, wasn’t allowed to see her father at all until July, when socially distant outdoor meetings were allowed. Since London was placed under Tier 2 restrictions from October, only window visits have been permitted.

She said: ‘I dream of being able to take him out for a walk in the park in his wheelchair, or take him to the pub for a pint when they open again. The chance to have Christmas dinner with him would be so special. He just needs a cuddle for Christmas.

‘Care homes are not supposed to be an asylum or a prison. This generation that is being betrayed at the end of their lives. Most of them do not have much time left, and are being robbed of time to spend with their families.

‘The costs of tests for family members would be a drop in the ocean. The Government cannot afford to wait any longer.’ 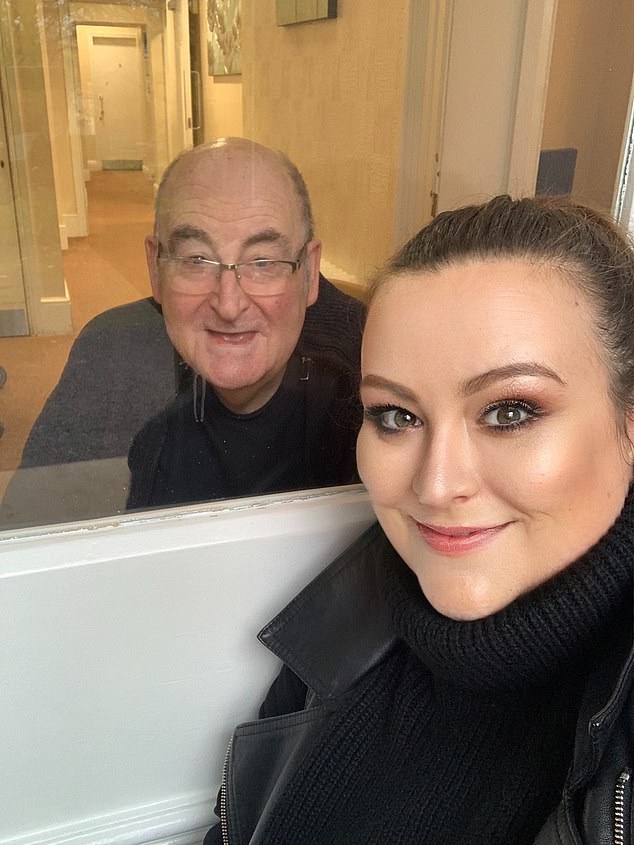 Les Collinson (pictured with his daughter Angela), 74, battles vascular dementia and the cruel ban on visitors means there is no one there to support him

During his long career as a vicar, Les Collinson supported many families through hard times.

Now as the 74-year-old battles vascular dementia, the cruel ban on visitors means there is no one there to support him.

His daughter Angela said: ‘Ever since March, all I have been able to do is wave at my dad through a window. The window was high up so you couldn’t even see him properly, and I’d leave in tears.

‘Once he put his hand out of the window to hold my hand but I had to explain that I’m not allowed to touch him. Prisoners have got more rights at the moment.’

Mr Collinson, from Darwen, Lancashire, has been in a care home since April last year when he suffered a stroke and developed vascular dementia.

Miss Collinson, 38, said: ‘People with dementia need that interaction with their loved-ones. I don’t understand why over summer I’ve been allowed to go on holiday and go out to pubs and restaurants, but I wasn’t allowed to hug my dad.

‘Testing seems like a simple solution to this, I would pay to get tested myself if it meant I could give him a hug. Even if I could just go inside and sit by his side for five minutes it would mean the world to me.’

Dave Stallard struggles to understand why his family don’t visit him every day like they used to.

The 79-year-old has severe dementia, and his wife Irene used to sit with him twice a day, regularly taking him on trips into the West Sussex countryside where they live.

But from March to July the couple, who have been married for more than 50 years, could not see each other at all. Now they are allowed only one half-hour visit every fortnight, sat two metres apart in a gazebo outside at his care home.

When Mrs Stallard wants to see her husband’s face at other times, she goes to his care home, peers over the railings and tells him she loves him.

Their daughter Miranda Gore-Brown, who used to visit her father in the care home at least twice a week, said the ‘inhumane’ situation cannot be allowed to continue.

Mrs Gore-Browne, a finalist on the first series of The Great British Bake off, said: ‘Every day that goes by without testing is a wasted day when people could be together. The lack of human contact is so cruel.

‘My mum should be given the same priority as a key worker and given routine testing so she can visit him. Rapid testing could transform the situation.

‘It is heartbreaking for my mum and has been so incredibly hard for her, thinking of all those hours where she would be able to sit chatting to him and holding his hand.

‘I’m really conscious that his time is running out. We have been lucky as he still knows who we are and his face lights up when we visit. Dad is really missing us and feels a sadness. He asks if we can visit more, and we have told him we want to be we can’t.’

Mrs Gore-Browne added: ‘The care home have been fantastic, they’ve done everything they can to help us visit and let us come and speak to them over the wall. But if we hadn’t been able to do that and look over the railings we wouldn’t have been able to see him for five months.’ 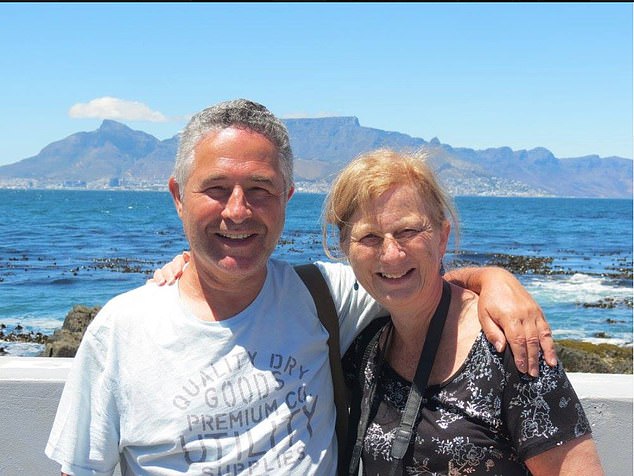 Trevor Salomon (pictured with his wife Yvonne), 68, is unable to see his wife in person

Trevor Salomon usually cherishes spending Christmas day cooking up a turkey feast with his wife by his side as sous chef.

But this year, he faces the prospect of not being able to see her at all.

His wife Yvonne, 64, moved into a care home last year after developing dementia. Since lockdown was imposed, they have only been able to wave at each other through a window.

Mr Salomon, 68, said: ‘I haven’t been able to touch or hold my wife since the first week of March.

‘As difficult as that is, I take comfort in the fact that the care home staff are doing an amazing job looking after all the residents.

‘Window visits and video calls will get us through the next couple of weeks, but they’re no substitute for a Christmas hug with Yvonne.’

He added that he fears that unless he is allowed to see her in person soon, his wife of more than three decades will no longer be able to recognise him.

Mr Salomon said: ‘Coronavirus and lockdown changed Yvonne’s care home overnight. The familiar faces of family and friends are gone, and carers are behind masks and can’t touch or comfort the residents.

‘Yvonne has lost her sparkle, she’s in a world she doesn’t understand.

‘We’ve only got video calls to keep in touch, and Yvonne doesn’t always understand them. If lockdown continues, I’m really fearful my wife won’t be able to recognise me at the end of all this.’ 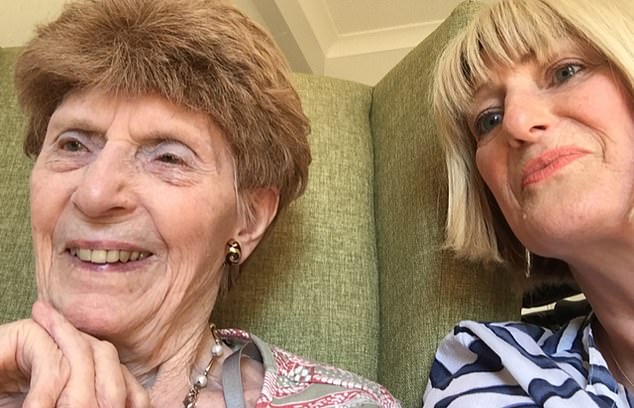 Caroline Raven has been trapped in a ‘never-ending nightmare’ since lockdown made it impossible to visit her 91-year-old mother Margaret.

‘She is always telling me she wants to die now,’ Mrs Raven said. ‘For a daughter to hear her mother say that is horrific. I’m powerless.’

Margaret has dementia and has been living at a care home in Bristol for nearly five years. Visits were banned completely in March but a few weeks later, family members were allowed to wave at residents through a window. Now they can see each other indoors but only through screens.

Mrs Raven, 59, said: ‘The care home have done everything possible but Perspex screens are not a substitute for seeing someone in person. Mum finds the visits very distressing, she doesn’t understand why she can only see me through a screen and often just dissolves into tears.

‘She says that unless she can hug me or kiss me, she just wants to go back to her room and lie in bed, hoping her time comes. She says she has had enough. It is no life for anyone. It is barbaric.

‘Mum doesn’t understand why things are closed or that there’s a virus. She just thinks I’ve stopped going to see her.

‘She has always been fun-loving, feisty and independent, but now she is lost and defeated.’

Mrs Raven added: ‘Being able to sit with mum indoors would mean everything to me. I would love to spend Christmas Day with her, take her some presents and have a sherry. If the Government gave us the ability to properly visit our family, it would be the best Christmas present ever.’