Anti-lockdown protests have erupted across Australia with demonstrators shutting down streets in Melbourne, protestors using an app to navigate around police roadblocks in Sydney and crowds gathering in Brisbane.

Hundreds turned out in full-force to protest against the stay-at-home orders as they swarmed in front of traffic in Richmond, Melbourne’s inner suburbs, on Saturday.

‘Free our children,’ the demonstrators chanted.

One protestor was filmed carrying a placard that read: ‘This is not about a virus. It’s about government total control of the people’.

Sydney protestors have been using live traffic app ‘Waze’ to navigate around roadblocks that were set up by police hours earlier as they prepared for the planned anti-lockdown rallies. 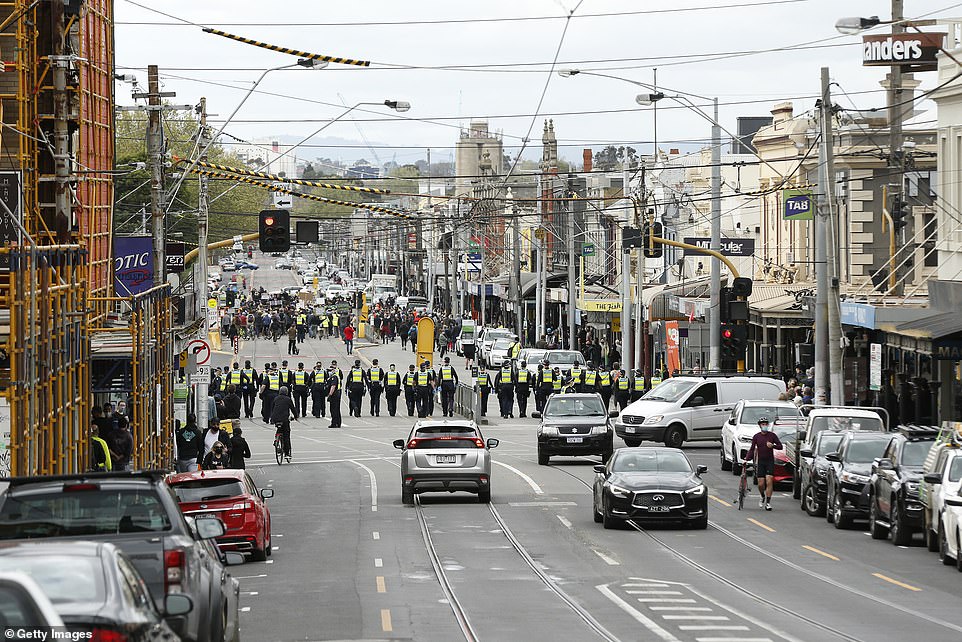 Crowds turned out in full-force to protest against the stay-at-home orders as they swarmed in front of traffic in Richmond, Melbourne’s inner suburbs, on Saturday 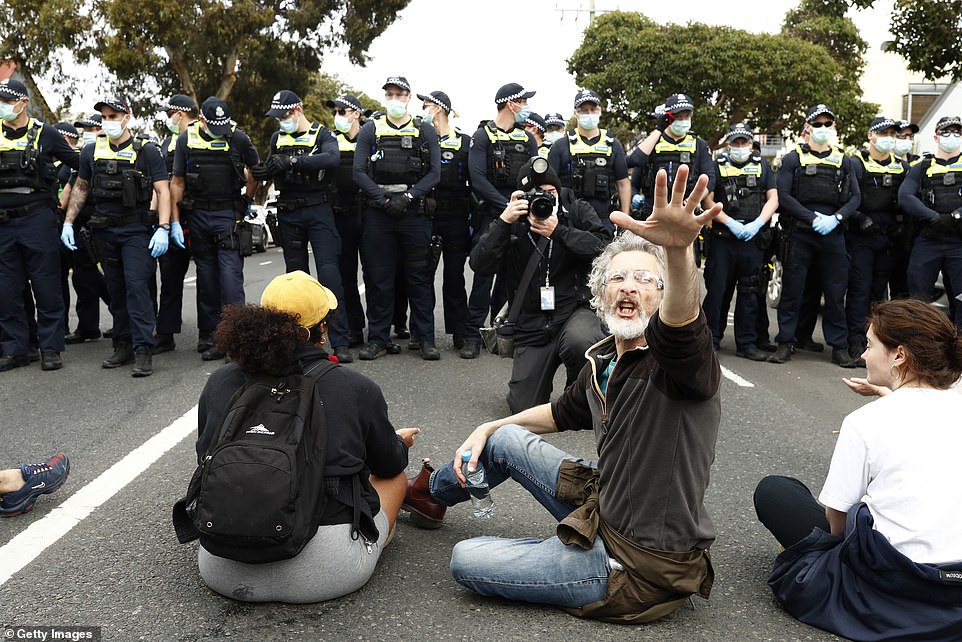 Anti-lockdown protestors sit on Bumley Street in Richmond, Melbourne, in front of a police blockade 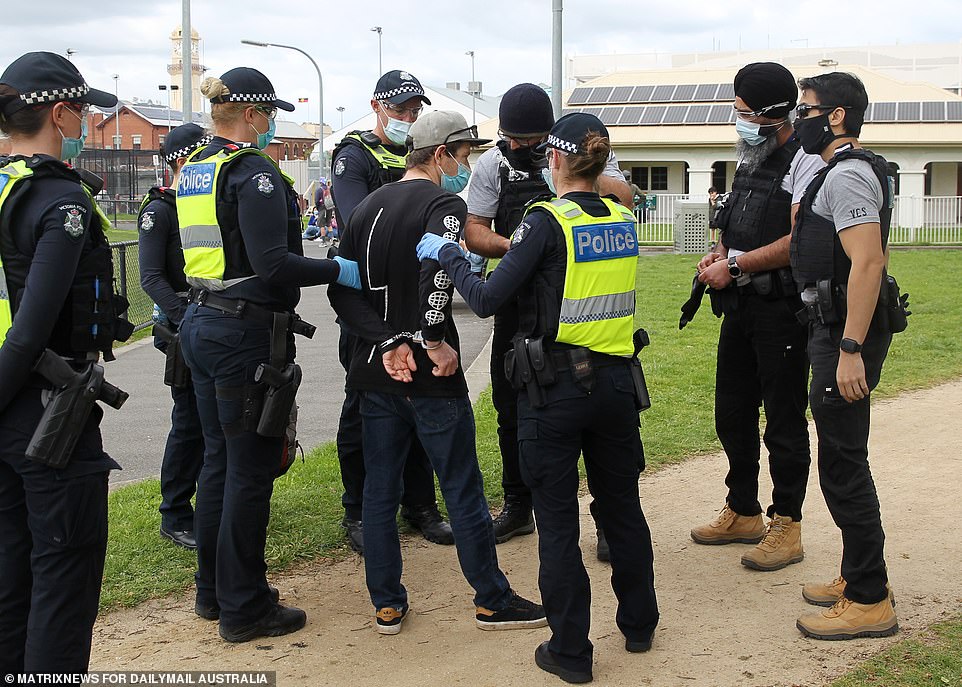 The anti-lockdown rallies were also picked up in Brisbane with residents gathering at the Botanic Gardens.

Footage showed several protest-goers not wearing face masks, sitting together in close proximity and picnicking on the grass.

Victoria,  NSW and QLD Police had been anticipating large turnouts and taken precautionary measures ahead of the planned rallies.

Roadblocks were set up and police presence was increased across Melbourne, Sydney and Brisbane.

Despite the closure of Victoria’s public transport network from 8am-2pm – as well as the threat of $5,500 fines for unlawful entry into the CBD – protest organisers confirmed the march would go ahead on Saturday morning.

‘With all Victorians best interests in mind we will be announcing a new location from 12pm,’ a protesters’ message read on social media early this morning.

‘The new location will be announced via our website and Telegram channel so stay tuned and look out for updates.’

‘Victoria Police have all contingencies at hand and I’m confident the plans they have are well at hand to handle these illegal and unhelpful gatherings’ he said.

The Melbourne Freedom group have since stated the location of the protest from 12pm will be at the corner of Bridge Rd and Swan St in Richmond – although this could be a deliberate ploy to confuse police.

The development comes as Ballarat re-entered another lockdown after a surge of cases in regional Victoria, with fears a large number of people gathering could worsen the state’s outbreak. 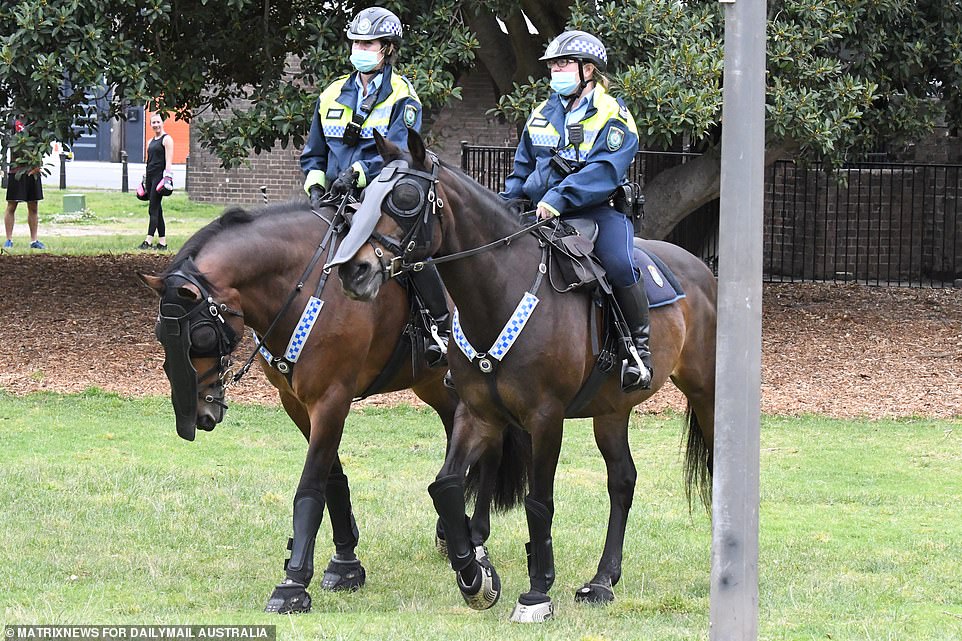 Sydney protestors have been using live traffic app ‘Waze’ to navigate around roadblocks that were set up by police hours earlier as they prepared for the planned anti-lockdown rallies (pictured, police patrol Sydney Park at St Peters) 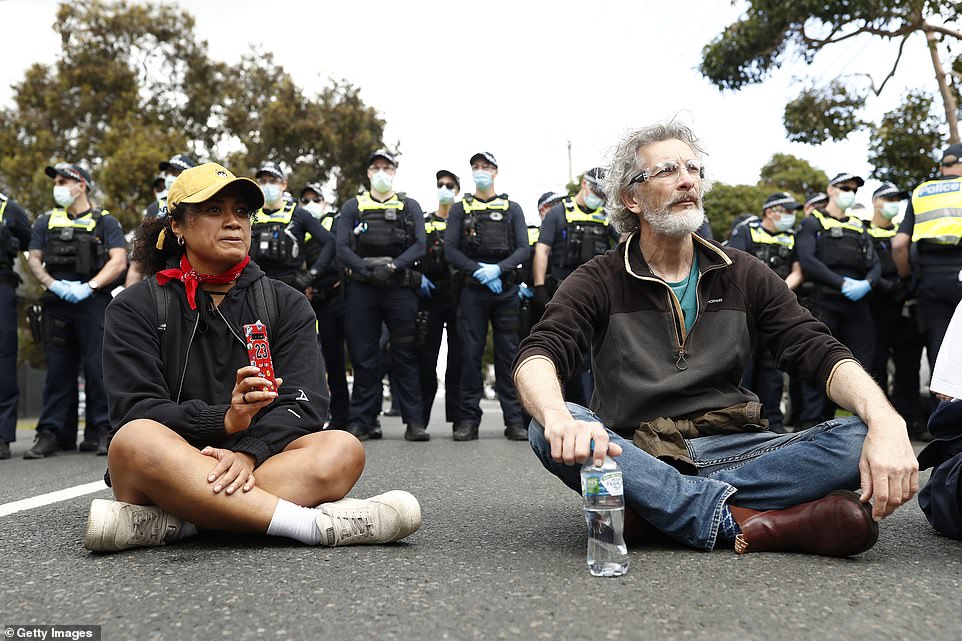 Anti-lockdown protestors sit on Bumley Street in Richmond despite warnings from police that demonstrators face fines of more than $5,000 if they attend the demonstrations 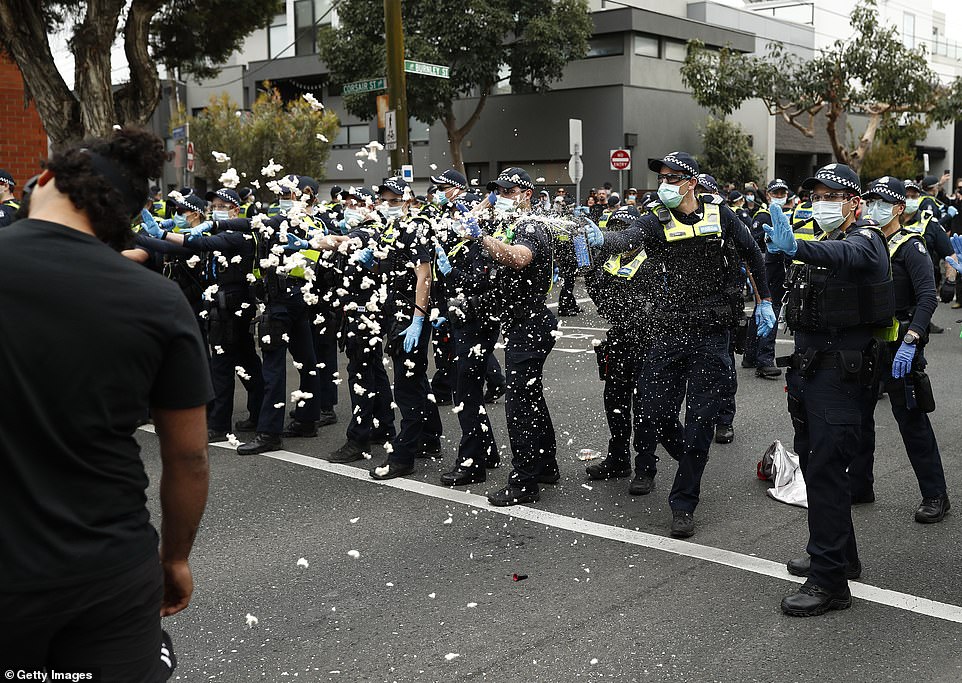 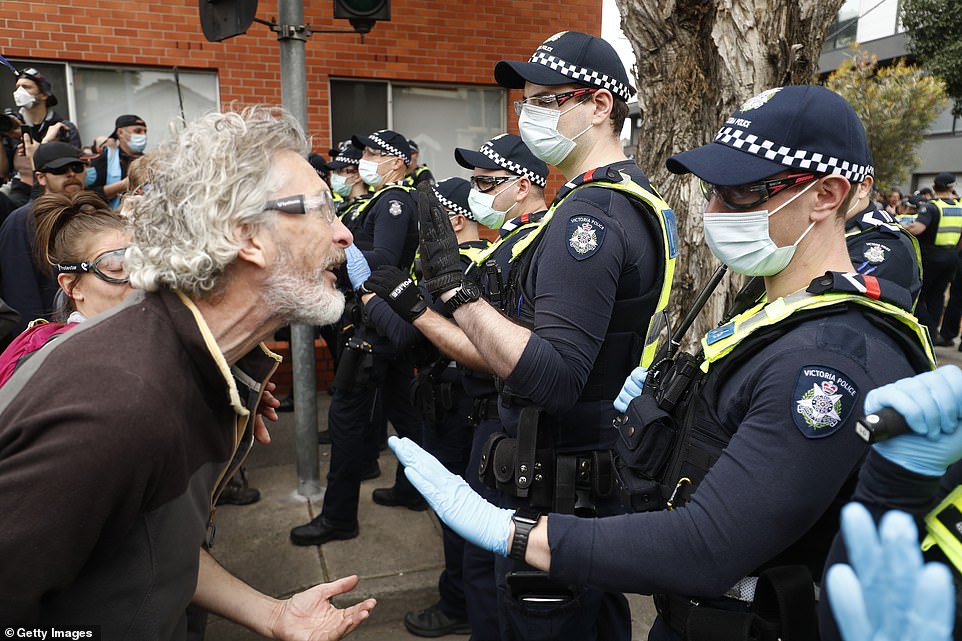 A protestor not wearing a face mask confronts a police officer on Brumley Street, in Richmond, Melbourne, on Saturday 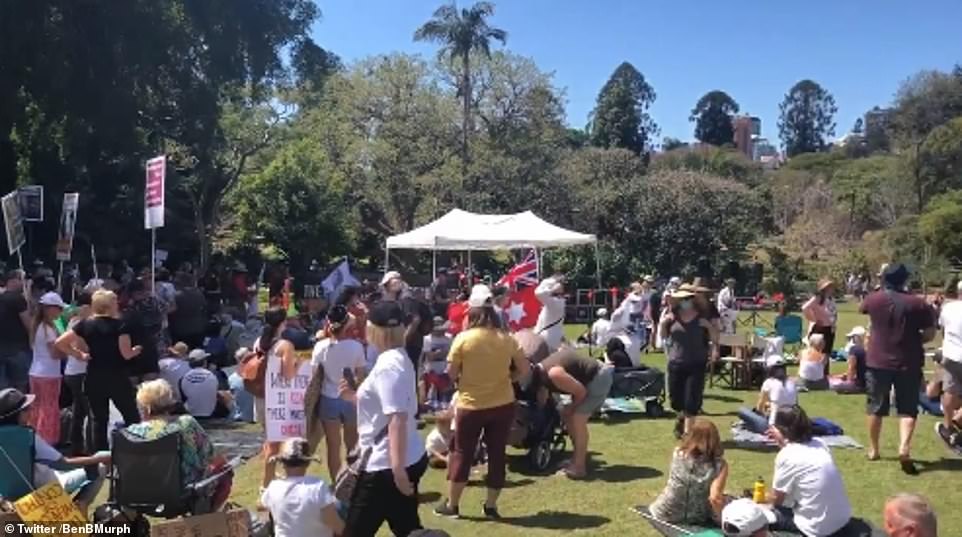 ‘The risk is so great from a convergence of thousands of people, as we saw recently,’ Mr Patton told the Herald Sun.

With more than 2,000 officers on hand in the CBD, 20 police stations will be closed to the public as law enforcement are pulled away from their daily duties to assist in the major operation.

‘We realise people are fatigued and this is a significant step for us. We didn’t take this lightly but given the circumstances and where we are with Covid, we cannot afford to allow transmission to occur,’ Patton said.

Trams have ceased operating entirely, while buses will bypass the city and trains will be barred completely from entering the CBD until 2pm.

A hard border surrounding the CBD has been established with barricades, traffic blocks and an increased police presence to block protesters from unlawfully gathering.

Essential workers who are required to travel will still be able to enter the city but need to carry their workers permit to gain access. 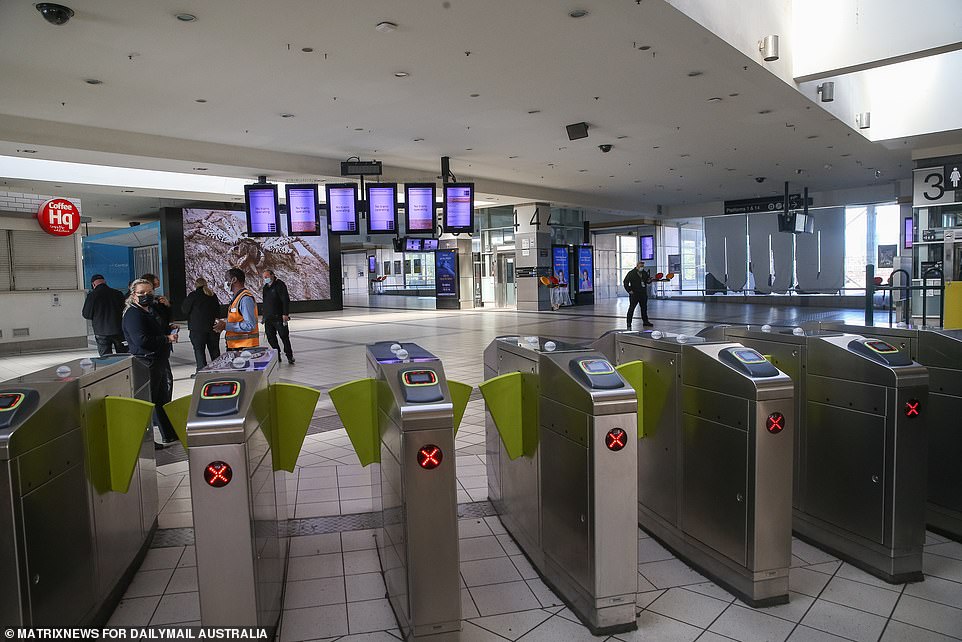 Trains have been stopped in Melbourne in a bid to halt numbers from the planned protest (pictured, a deserted Flinders St Station) 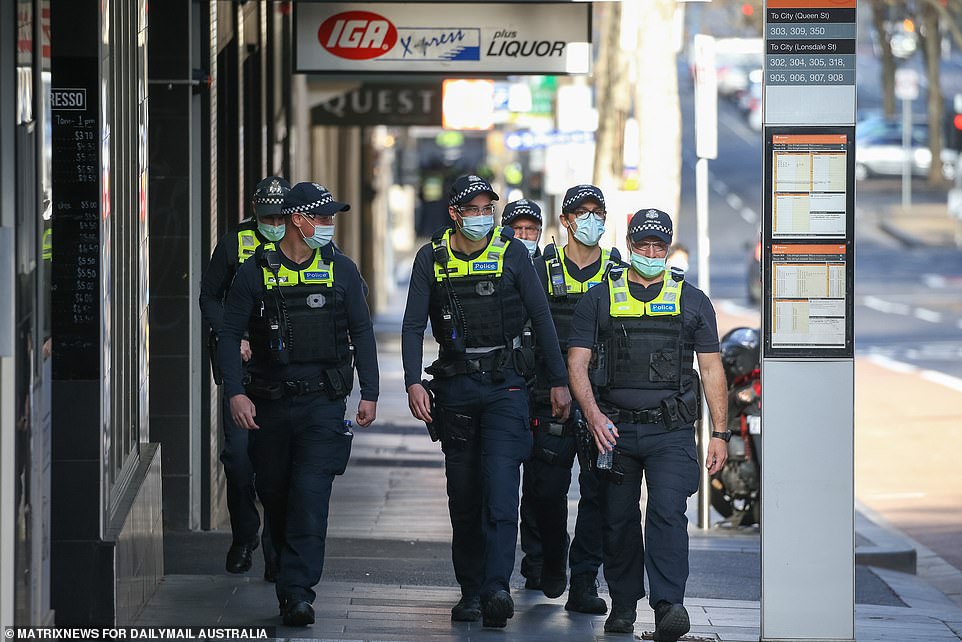 Protestors will be fined $5500 by police if they enter Melbourne’s CBD unlawfully (pictured, police ahead of the planned march) 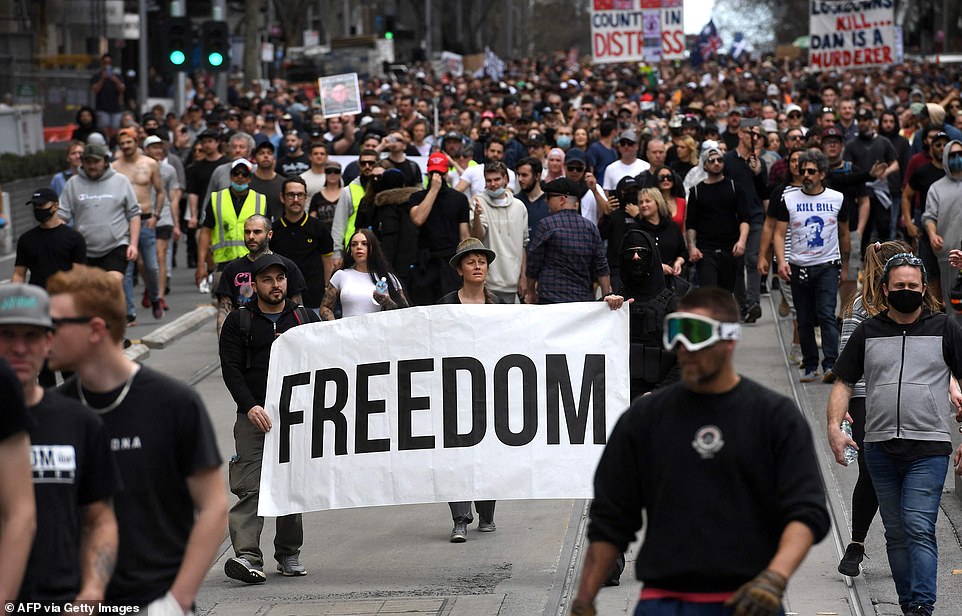 In Sydney, NSW police have promised an equally ‘highly visible’ operation to prevent protesters from gathering in large numbers for another march.

Victoria Chief Commissioner Patton warned there would be a heavy police presence and urged people not to bother turning up in a bid to stop protesters and avoid ‘any confrontation at all’.

The heavy-handed measures come just weeks after Patton labelled the August 21 protests as ‘one of the most violent the city has seen in 20 years’.

Officers had no choice but to use non-lethal weapons to defend themselves from an angry mob that came armed and appeared intent on attacking them. 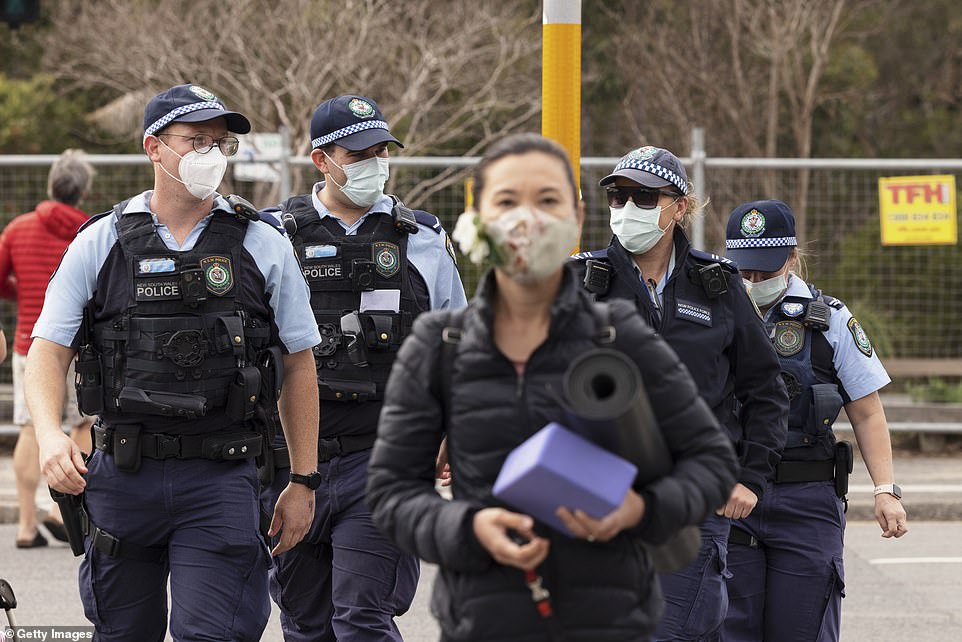 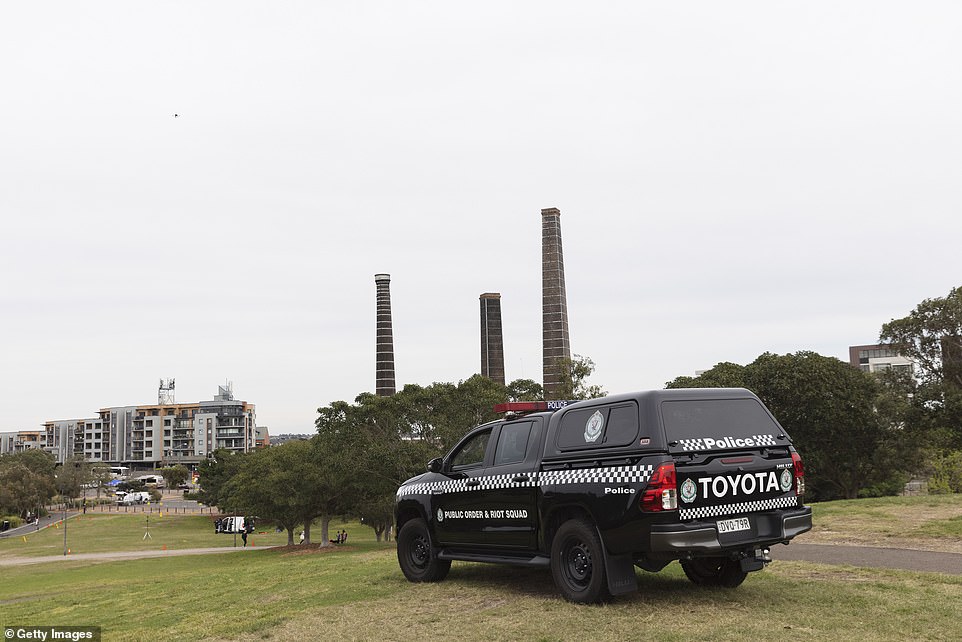 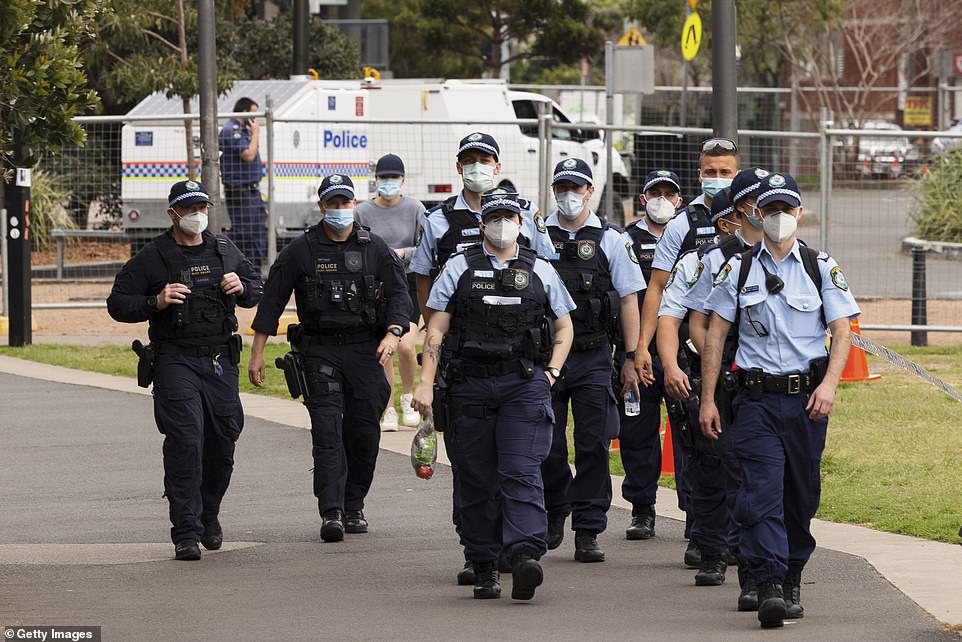 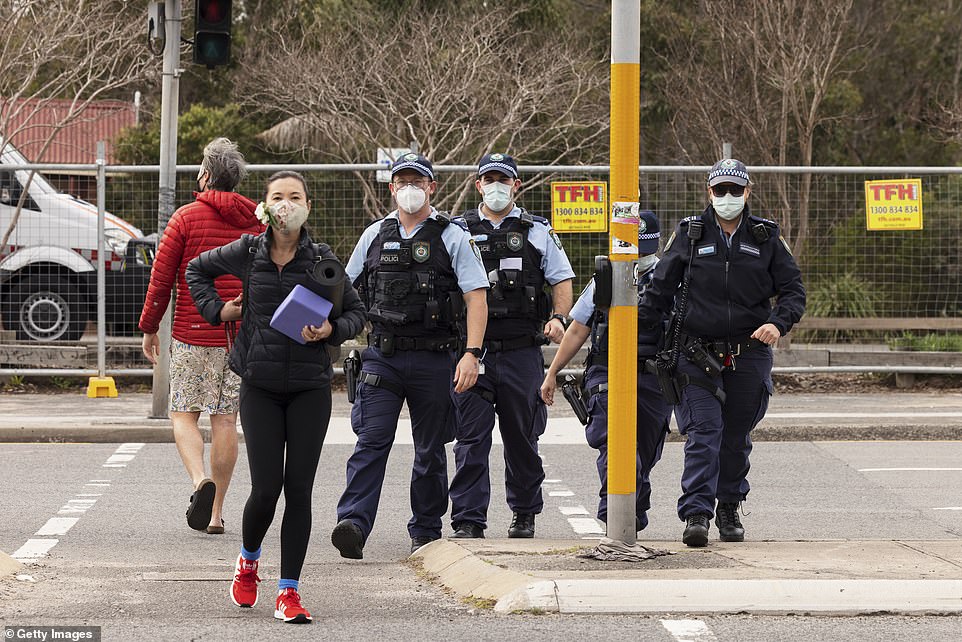 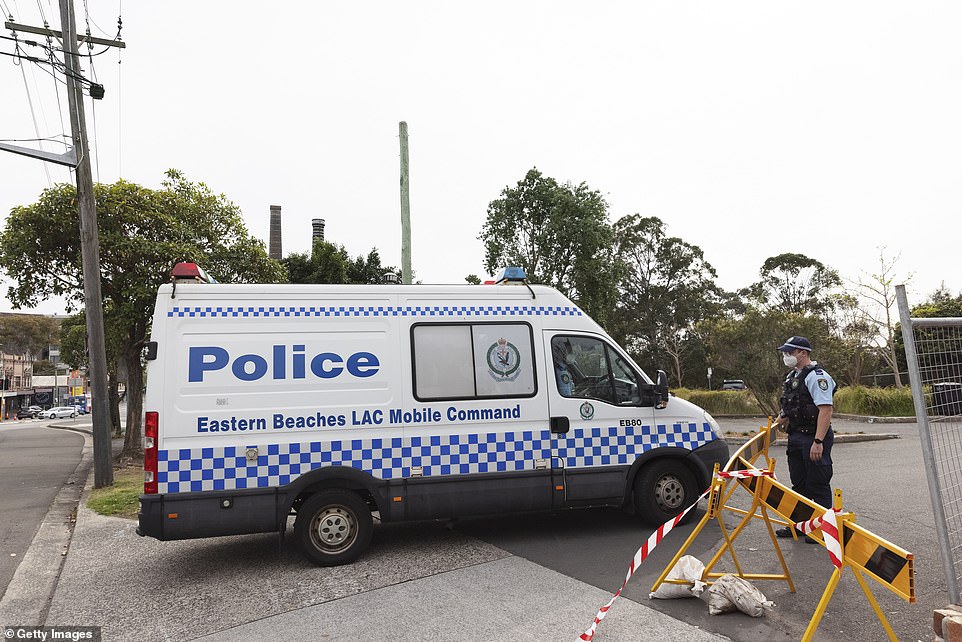 Tear gas, pepper spray and rubber bullets were used on demonstrators in Melbourne and more than 200 people were arrested after the anti-lockdown rally descended into a riot.

More than 4,000 people turned up to the ‘freedom rally’ despite Premier Dan Andrews warning the state was on the verge of a Covid catastrophe.

The protests resulted in six officers being hospitalised – including two with suspected broken noses, one with a broken thumb and the others with concussions. 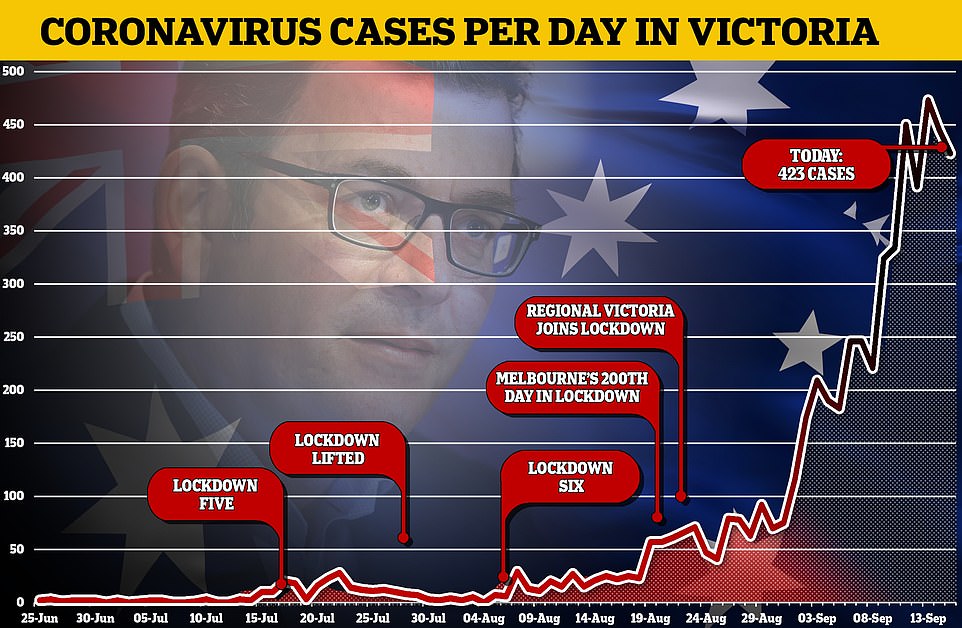 Victoria recorded 423 new coronavirus cases on Wednesday, bringing the total number of active cases in the state to 4,038

Mr Patton said he hoped officers would not have to use crowd control equipment such as capsicum spray and rubber bullets this Saturday but assured all police had nonlethal options on hand to prevent any violence.

Victorians have already spent an agonising 226 days in lockdown since the pandemic began with fears it could continue well into Christmas.

Residents have lived through the toughest lockdown measures in Australia, with other states choosing not to close local playgrounds and skate parks or impose curfews.

Other draconian rules such as only one parent accompanying children to playgrounds and eating being prohibited at the community venues have only been implemented in Victoria.