Coventry Building Society has left more than 2million customers in limbo following an IT crash, which began on Monday morning.

Britain’s third biggest mutual is blaming the fault on an internal update gone wrong, according to reports on Twitter, with suggestions that the problem may have started as early as 6am yesterday.

It posted at 9.13am yesterday: ‘Online Services are unavailable at the moment. Our Call Centre and branches are also affected with restricted access to systems.

‘We’re really sorry for the inconvenience and are doing all we can to restore normal service.’

The situation appears to still not have been resolved and has left customers unable to make payments or access funds, whilst regular payments, standing orders and direct debits failing to show up on time.

Swathes of angry customers have taken to twitter to vent their frustration while there are photographs circulating of long queues at branches.

One person said that the two day systems failure had prevented them from exchanging contracts on their new home.

Another questioned how such a major organisation could still be down after more than 24 hours.

It is clear from the Twitter backlash that people have been left furious with online payments stopping and unable to withdraw cash from ATMs.

One post read: ‘Awaiting my child maintenance from Ex, it’s not come thru from his CBS account so I’m now overdrawn with no money to get the weekly food for the kids. Bit of a joke that it’s taken this long!! Where do I send by bank charges to to get reimbursed??’ 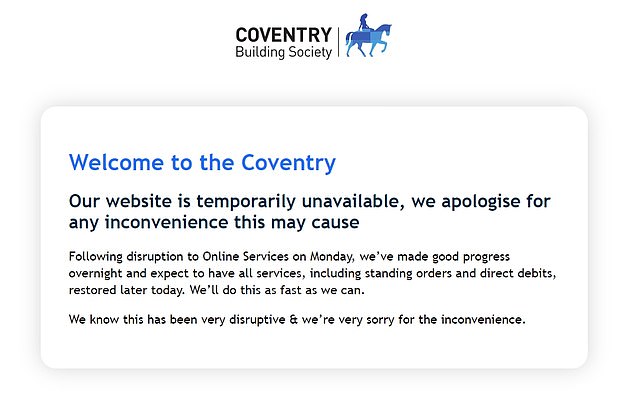 Coventry Building Society customers are currently being blocked from signing into their account.

Another post added: ‘This really is a dreadful situation. People need access to their savings/offset accounts to ensure that they can cover outgoing bills.

‘I am looking to withdraw money into my current account to cover direct debits. Not good at all. Going into a branch is not possible in Edinburgh!’

Our buyers are waiting on a mortgage approval and this means the property we are trying to buy could fall through. Appalling service for a firm that has obviously not invested in its systems at expense of ‘record profits’

paltry £100 withdrawals from branch ! how many branches do you have outside Warwickshire! there are people stranded all round the country with no atm facilities and it’s your fault , I hope you are going to compensate every single customer , Draconian services

To be honest you as a company have left thousands of people without access to their money who in this hard time needs it for shopping, bills, gas and electricity and school uniforms for their child/children. It simply isn’t good enough. People are struggling

Earlier today, the mutual released a further statement to This is Money claiming it is on track to restore online banking by this evening.

It said: ‘Unfortunately, we’ve had an internal technical issue that caused disruption to some of our systems yesterday. We are extremely sorry for the inconvenience and stress that this has caused and are committed to putting this right for our members.

‘We’ve been working to restore services as quickly as possible and we expect that they will be back to normal overnight, with all regular payments, standing orders and direct debits, that were scheduled to take place yesterday and today, starting to go through.

‘Members can still withdraw and deposit cash at branches, and the teams in our call centre are continuing to take calls and support members. We’ve been able to complete all house moves as planned.

‘It’s been a difficult couple of days and we’re really sorry for the time it’s taking to restore our services, but it is very important to do this in a controlled way.

‘We’d like to thank our members for being patient as we restore services. We will keep our website and social media updated with progress.’

Some customers have suggested that a hack may be behind the systems failure but Coventry have been quick to assure people this isn’t the case.

‘I can confirm that we have not been hacked and that everyone’s accounts are safe, read its post on Twitter.

If you have been hit by this in a serious way, please contact us: editor@thisismoney.co.uk.

For the last decade, I have had two current accounts. One is my main account where my salary is paid, major bills are set up for via direct debit and where I do most of my day-to-date spending.

However, I have a second current account with some cash in. On the whole, I use this secondary account for overseas spending. I have an account which offers fee free spending abroad and I like to build up a pot of spending cash before I go away, segregated from my main account.

But the main reason I have it is to dodge IT meltdowns. They happen from time-to-time, and at a variety of banks and building societies.

At the very least, having this secondary account means having access to cash and being able to make purchases at shops, or for vital items.

And, the beauty is you can switch this secondary account – if you want – to take advantage of the array of switching cash bribes on offer from banks, including a top £160 from Santander.

If you want some inspiration, read our best bank accounts for interest, perks and cashback guide.