Sean Couturier scored in regulation and provided the only goal in a shootout as the Philadelphia Flyers beat the Toronto Maple Leafs 5-4 Wednesday night.

After the first four Flyers missed in the shootout, Couturier deked to his forehand and beat Frederik Andersen. Carter Hart secured Philadelphia’s third win the last eight games when he stopped Nylander’s attempt.

It looked as if the Flyers had the game won in overtime when Travis Sanheim poked the puck over the goal line 2:34 into the extra period. But the officials disallowed the goal because they said the whistle had blown to stop play, even though Andersen never appeared to have control.

Nylander evened it at 4 with 8:27 left in the third when his turnaround shot from the slot, following a turnover by Shayne Gostisbehere, went high over Hart. 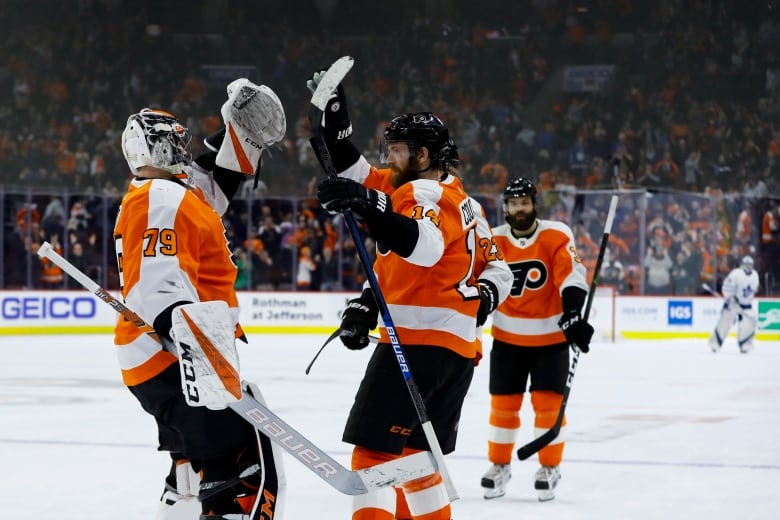 Hartman had put Philadelphia ahead 4-3 with 11 minutes left in regulation. He took a pass from Scott Laughton from behind the net and scored with a shot between Andersen’s legs from close range.

Matthews tied it at 3 by following his own miss and converting from a sharp angle 1:43 into the third.

The Flyers took a 3-2 lead with second-period goals from Konecny, Gudas and Couturier.

Konecny’s wrist shot on the break whizzed over Andersen’s left shoulder 3:39 into the period, pulling Philadelphia within 2-1.

Gudas evened the score 3:36 later when his long wrist shot got past a screened Andersen. Couturier netted his 32nd of the season on a deflection of a shot by Sanheim with 4:14 left in the period to give Philadelphia a one-goal lead heading into the third.

Goals by Brown and Kadri gave Toronto a 2-0 lead after the first period.