The widow of a Court of Appeal judge who is accused of historic sex offences against a boy would have hidden her abusive behaviour from her friends, a court heard today.

Jurors were told Lady Lavinia Nourse, 77, hid ‘dark secrets’ about her life while she and her husband wined and dined high profile friends including Lord Archer and Sir Malcom Rifkind.

Dame Mary Archer appeared as a character witness at her trial last week, describing Lady Lavinia as ‘kind hearted’ and ‘generous’, a keen flower arranger and hostess who doted on her grandchildren.

Lady Archer explained how she and her husband got to know the Nourses when they were all living in Grantchester, near Cambridge, and had gone on two ‘wonderful’ yachting trips together.

Lady Lavinia, from Newmarket, Suffolk, is on trial at Peterborough’s Nightingale court accused of repeatedly sexually abusing a boy in the 1980s.

Lady Lavinia (pictured outside court today), is on trial at Peterborough’s Nightingale court accused of repeatedly sexually abusing a boy in the 1980s 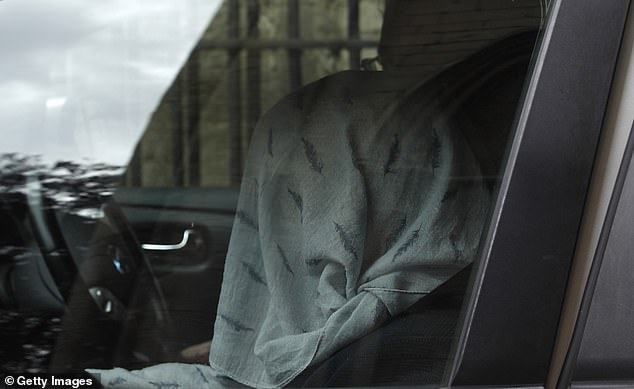 Jurors were told Lady Lavinia Nourse (seen outside court today), 77, hid ‘dark secrets’ about her life while she and her husband wined and dined high profile friends including Lord Archer and Sir Malcom Rifkind

A court had earlier heard how her husband Sir Martin Nourse, who died in 2017, ‘may have known’ his wife was sexually abusing a young boy, but ‘looked the other way’.

Summing up the case today, prosecutor Jennifer Knight QC said: ‘You have heard evidence from a number of Lady Nourse’s friends who have come to court to share their experience of her character.

‘They say she is a generous, kind friend, an intelligent, talented, highly sociable lady who is great fun to be with and loyal to the people she likes.

‘No doubt she is all of those things – to be the life and soul of the party when entertaining, to be good company, and nice and kind to adult friends. These are all traits from a particular side of one’s character.

‘We all have a best part of ourselves. But we all to a greater or lesser extent have a public and a private face.’ 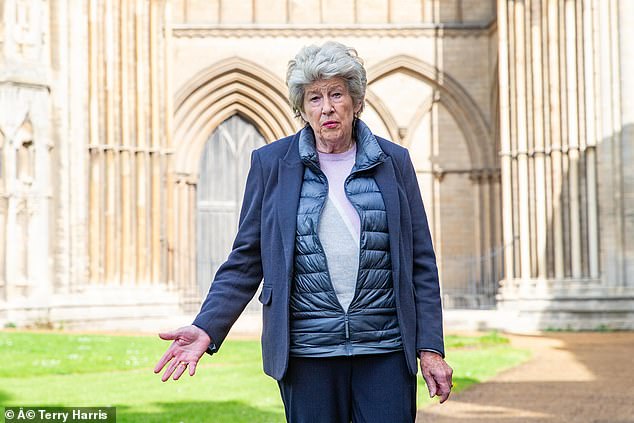 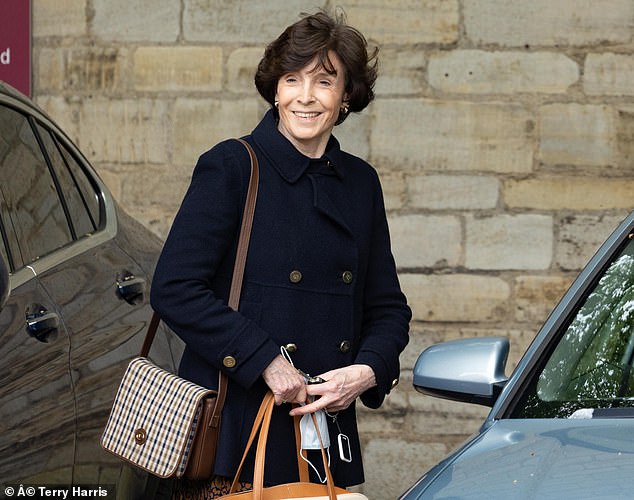 Dame Mary Archer appeared as a character witness last week, describing Lady Lavinia as ‘kind hearted’ and ‘generous’, a keen flower arranger and hostess who doted on her grandchildren 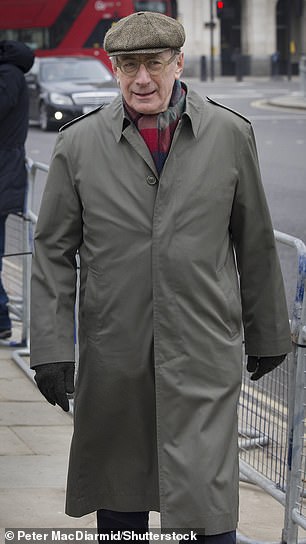 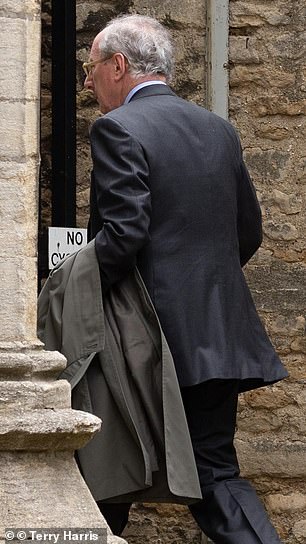 Ms Knight said she was sure that Lady Lavinia and her husband Sir Martin were ‘wonderful people to go on holiday with.’

But she described another side to her character, alleging she was prone to ‘terrifying rages’.

She said: ‘I am sure she was a generous host, but none of these witnesses can say anything about how she behaved behind closed doors.

‘Their evidence gave a glimpse into the social world that the Nourses moved in. Sometimes friends and acquaintances have dark secrets. The examples are legion.’

The trial previously heard evidence from a woman who claimed she twice saw Lady Lavinia abusing the complainant, and had told Sir Martin what she had seen.

She alleged that he told her on each occasion that he would ‘deal with it’.

Ms Knight said Sir Martin, who died aged 85 in November 2017, may have thought the abuse had only happened twice and ‘had no idea what the full scale of it was over the years’. 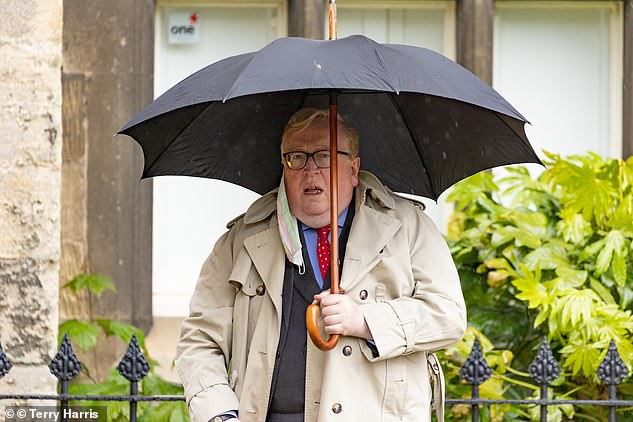 Journalist and historian Simon Heffer also appeared as a character witness, saying he had known Lady Lavinia and her husband for 25 years

She said: ‘The witnesses spoke of him having the highest standards of personal integrity with a cast iron belief in right and justice, a great judge and a fine man, and no doubt he was all of these things.

‘So the defence may say, how can it possibly be that this man – a High Court judge, a vice president of the Court of Appeal – can possibly allow this to happen?

‘He no doubt loved her (his wife). She could be a star, intelligent and amusing, but he would have seen her rages.

‘Had he known the full extent of what was going on, he could have been driven to do more, but keeping the peace with his vivacious, but difficult wife was all important.’

The court heard that Sir Malcolm, 74, and his late wife had gotten to know the Nourses some time between 1997 and 1999.

The friendship was struck after Sir Malcolm served as a Cabinet minister under Margaret Thatcher and John Major, before going on to serve as defence secretary from 1992 to 1995, and foreign secretary between 1995 and 1997.

‘We met them socially and we enjoyed each other’s company,’ he told the court. 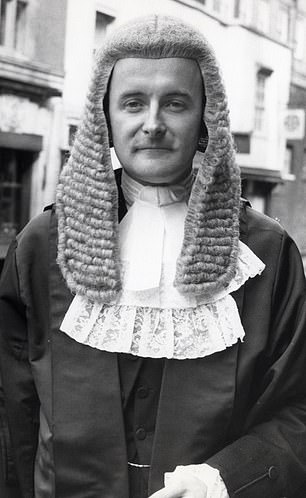 Lady Lavinia, from Newmarket, Suffolk, was married to Sir Martin Nourse (pictured), who died in 2017 aged 85

‘When my late wife and I were driving to Scotland or on the way back we would quite often stay with them. Our home was outside Edinburgh and they would often stop over on their way back from holidays in Scotland.

‘We saw them three or four times a year. It varied from year to year and according to other factors.’

Sir Malcom, a barrister at the Scottish bar, said he spoke more with Sir Martin, a former Lord Justice of Appeal, when staying with the couple, but said that he found Lady Nourse to be ‘very sociable’ and ‘very gregarious’.

Journalist and historian Simon Heffer, a former deputy editor of the Spectator and Daily Telegraph, also appeared as a character witness, saying he had known Lady Lavinia and her husband for 25 years.

He said he would meet up with the couple ‘at least half a dozen times a year’ which included shooting days with Sir Martin.

‘I remember at his funeral she was not far off prostrate with grief. She was in a hell of a state after being widowed after a long and happy marriage.’

He added: ‘She is a person I regard of being of complete integrity and probity who is very loyal to her friends. That is why I wanted to come here today.

‘Sir Martin was one of the most upright people I have met in my life. He took his responsibilities as a very senior judge very seriously. He had a cast iron belief in justice. He absolutely believed in the rule of law and in doing things properly.’

Lady Lavinia has denied abusing the boy or being attracted to children, describing the claims as ‘completely repulsive’.

She alleged the evidence of a female witnesses who claimed she saw the abuse happen twice as ‘an impossible scenario’ and ‘just not true.’

Speaking of her accuser while being cross-examined, she said: ‘He is most definitely lying’.