A couple who were so desperate to finally wed after the pandemic wrecked their wedding plans twice have shared how they organised their big day in less than 24 hours – and used artificial flowers for the bouquet and a homemade cake.

Mark and Kimmi Fiander, from Heacham, Norfolk, had dreamed of tying the knot in New York in September but found their plans scuppered by soaring rates of Covid both here and across the pond.

Resigning themselves to a New Year’s Eve wedding in their local church instead, the pair were determined to ‘end a terrible year on a high’.

Third time lucky! Mark and Kimmi Fiander, from Heacham, Norfolk, had planned to wed in New York but re-arranged their nuptials for New Year’s Eve when the pandemic struck – only for a tier change on Boxing Day to see them forced to hastily re-organise again 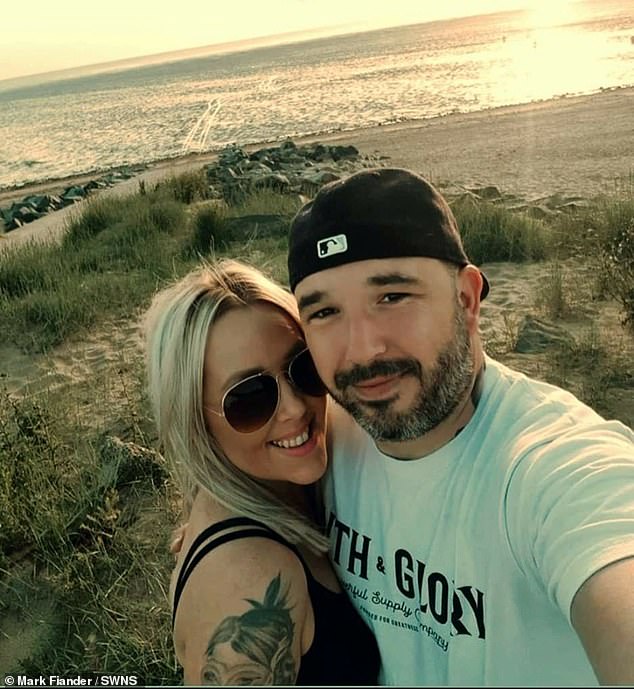 The couple, who had been dating for eight years after meeting at Howdens, where they both work, managed to secure the room they’d booked for their wedding breakfast at a local pub and persuaded their wedding photographer to cancel his Christmas Eve plans

However, Covid had other plans and the couple found their second big day ruined when Boris Johnson announced on December 23rd that their part of the country would be going straight into tier 4 on Boxing Day, leaving them with just Christmas Eve to wed before the latest round of restrictions kicked in.

Their vicar, Veronica Wilson, came to their rescue by suggesting that they could wed on December 24th to ensure friends and family could still attend.

The determined vicar even gained special permission from the Bishop of Norwich to get a wedding licence at such short notice.

Mark, 40, and Kimmi, 38, set about making plans, buying up artificial flowers in the nearby city of King’s Lynn for a friend to make up a bouquet and asking Kimmi’s sister to quickly bake them a wedding cake. 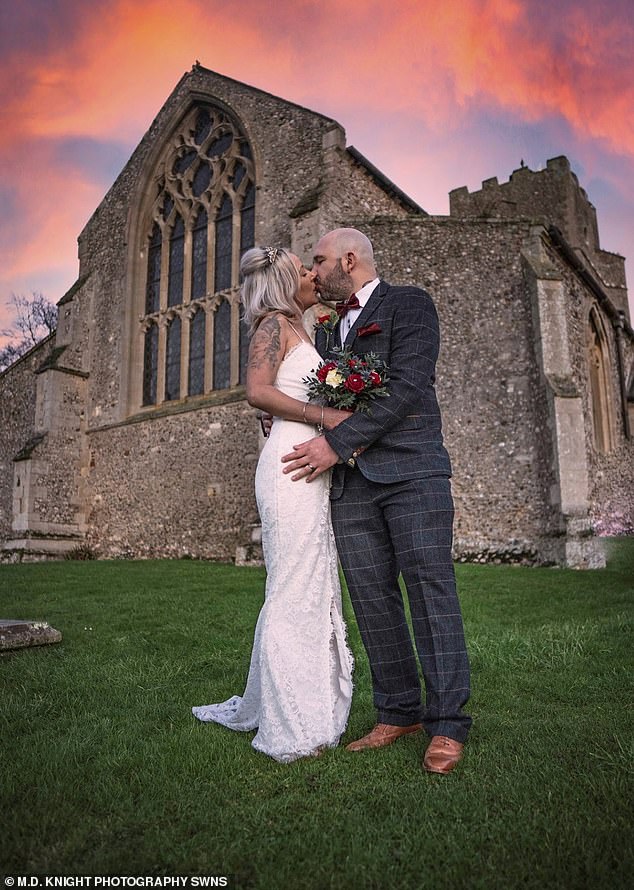 Finally! The couple used artificial flowers for the bouquet and a homemade cake made by Kimmi’s sister to celebrate their big day 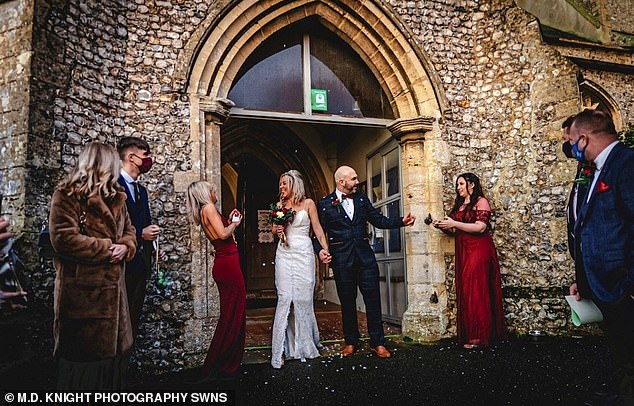 Their vicar, Veronica Wilson, was the real heroine of the day, the couple say, after she sought out a special license that would allow them to marry within 24 hours

They managed to secure the same room in the pub they’d chosen for their wedding breakfast, the Rose and Crown at Snettisham, and their wedding photographer, Mark Knight, agreed to shoot their big day despite it being so close to Christmas.

The loved-up couple, who met eight years ago at Howden’s Joinery, where they both work, said their were left devastated when they heard the news that their second attempt to get spliced was in jeopardy while in the vets with their four-month-old French bulldog Kenny.

The couple say they were convinced that the change would be from 2 to 3 and were staggered by the leap into tier 4.

Mark told the Eastern Daily Press: ‘We heard the announcement at 4pm, she was in tears.

‘We only live around the corner from the vets, so when we got home Kimmi said she’d ring Veronica to see if there was anything she could do. 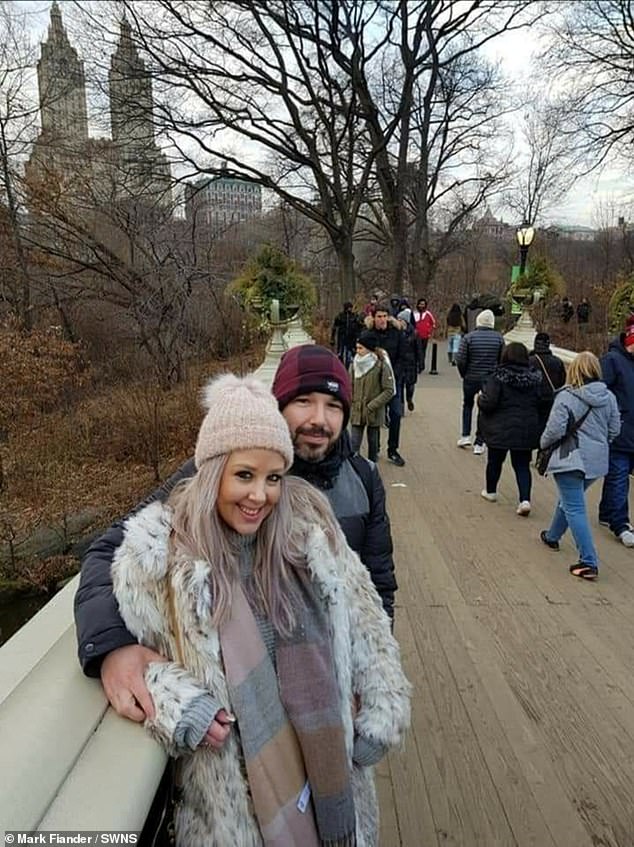 The Big Apple can wait: the couple, who had planned to get spliced in New York originally, said they were left in tears when their tier change announcement was made on December 23rd 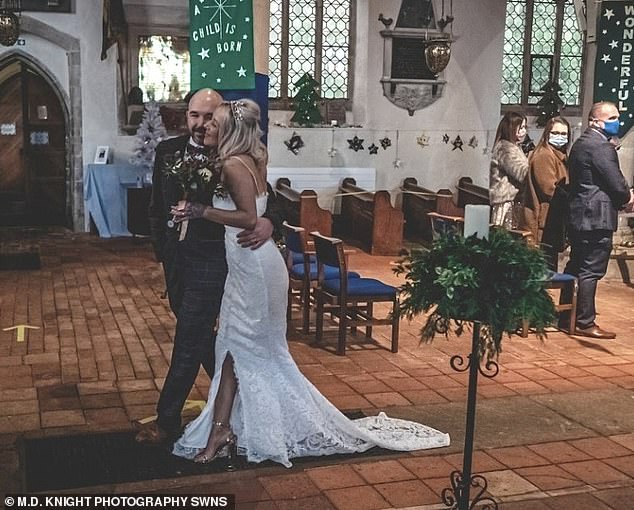 ‘She rang her and she was already on it and about to ring us and say: “Can you do tomorrow?”‘

Despite the breakneck speed of their wedding planning, the couple managed to pull off their preparation and walk down the aisle less than 24 hours after hearing the region would be plunged into tier 4, saying their vicar proved the heroine of the hour by making everything happen.

Rev Wilson said she was delighted to be able to help the couple ‘after such a tough year’ and said getting the paperwork sorted was the trickiest part.

‘The complexity was the legal bit. It was just brilliant the diocesan registrar, Stuart Jones, the Rt Rev Graham Usher, Bishop of Norwich and I were able to get the licence ready. We had it all done in an hour and a half.’