A couple organised their wedding just in two hours to make sure they were able to get married before London was plunged into tier four at midnight last night.

Chloe Collins, 31, and Jamie, 29, from Watford, had arranged to get married on September 6 but were forced to change the date three times as different restrictions were implemented across the country.

Disappointed by Prime Minister Boris Johnson’s announcement yesterday, the couple decided they wanted to finally tie the knot before it was too late – beating the restriction changes by two hours.

They walked down the aisle at Edgware United Synagogue at 10pm last night surrounded by their allotted 15 guests, BBC reports.

Chloe Collins, 31, and Jamie, 29, from Watford, arranged their wedding in just two hours to ensure they could tie the knot before the tier four restrictions were imposed

More than 100 people watched on Zoom as the happy couple got married.

Lettings negotiator Mrs Collins, who described feeling ‘physically sick’ at the new restrictions, said:  ‘I’ve never in my life felt so much love and felt so grateful.

‘We felt the love, and it felt like they were there.’

Their original wedding was meant to be hosted at a country estate hotel in Watford, with 130 guests.

But, as tough restrictions remained in place when their wedding date loomed, they rearranged to have a small ceremony of 15 guests on November 22.

After this they changed the date again, this time moving it to the December 20, after the second lockdown was introduced. 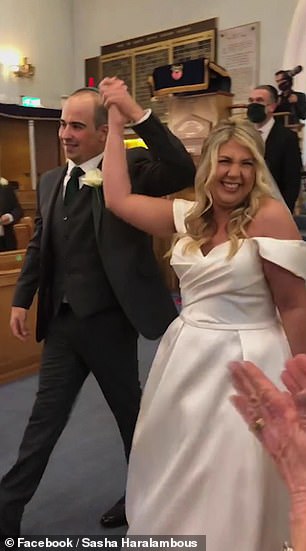 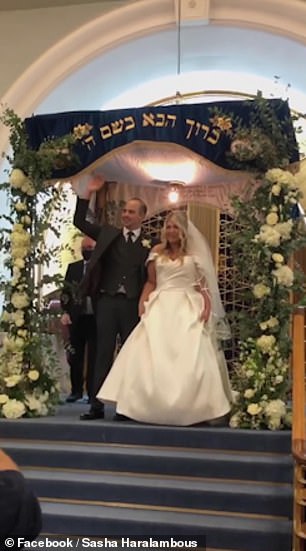 They walked down the aisle with just two hours to spare before London was plunged into tier four, after their rabbi suggested they change their wedding date

Within two hours they were able to sort out the arrangements and get married before the restrictions prevented them from doing so.

To make it to the wedding, Mr Collins’s best man drove for two hours and got straight back in his car and went home after the service.

The latest restrictions would have prevented the couple from getting married as planned, as ceremonies are only allowed to go ahead in ‘exceptional circumstances’.

One such circumstance is for death-bed marriages, in which one partner is unlikely to recover.

Since their wedding they have received hundreds of messages from people marvelling at their impressive ability to arrange the wedding at such short notice.

Wedding restrictions: What is the difference between tier three and tier four?

For people living in tier 3 areas with weddings planner, they are still able to get married but receptions after the ceremony have been banned.

Weddings are permitted in all tiers, except tier 4, but are restricted to 15 people – including the couple.

Those in tier 4 who were planning to get married will now have to rearrange following the announcement yesterday.

Weddings and civil partnership ceremonies must not take place.

There are some exceptional circumstances however.

If one of the people getting married is seriously ill and not expected to recover – also known as a deathbed wedding’ – they they can have a wedding limited to six people.

The same applied to those about to undergo debilitating treatment or life-changing surgery.

People who are travelling into a tier 4 area for a wedding are expected to adhere to tier 4 restrictions.