A couple have been ordered to leave their home after more than 10 feet of land fell into the sea last week, leaving the property precariously close to a cliff edge.

It comes just weeks after shocking new data revealed coastal erosion could claim 7,000 homes by the end of the century, including in the south of England where the coast is being actively eroded threatening areas including Norfolk, Suffolk and Sussex.

After a 11-foot section fell away overnight in a ‘cataclysmic event’ last week, engineers concluded a row of three cottages in Easton Bavents in East Suffolk was now just over 30 feet from the cliff, and unsafe.

Juliet Blaxland, 55, and her husband Giles Stibbe, 60, will now move home next week despite saying as recently as September that they thought her home, one the furthest east in the UK, would be safe for at least five years.

But violent autumn storms, alongside big tides, triggered a dramatic increase in erosion, with nine metres of land lost in the past four months. 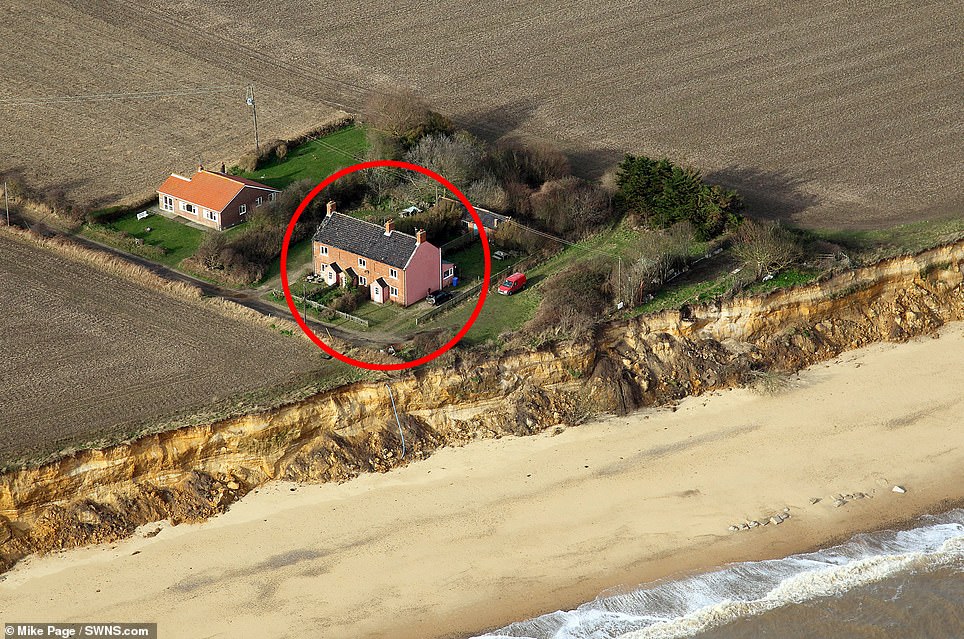 Juliet told the Mirror: ‘We knew all along it would eventually be demolished but it has caught us by surprise, as we could have reasonably expected another year here.

‘But ever since we moved in we were always aware of how little time we had left.

‘Demolition is incredibly sad. It’s the end of an era.’ 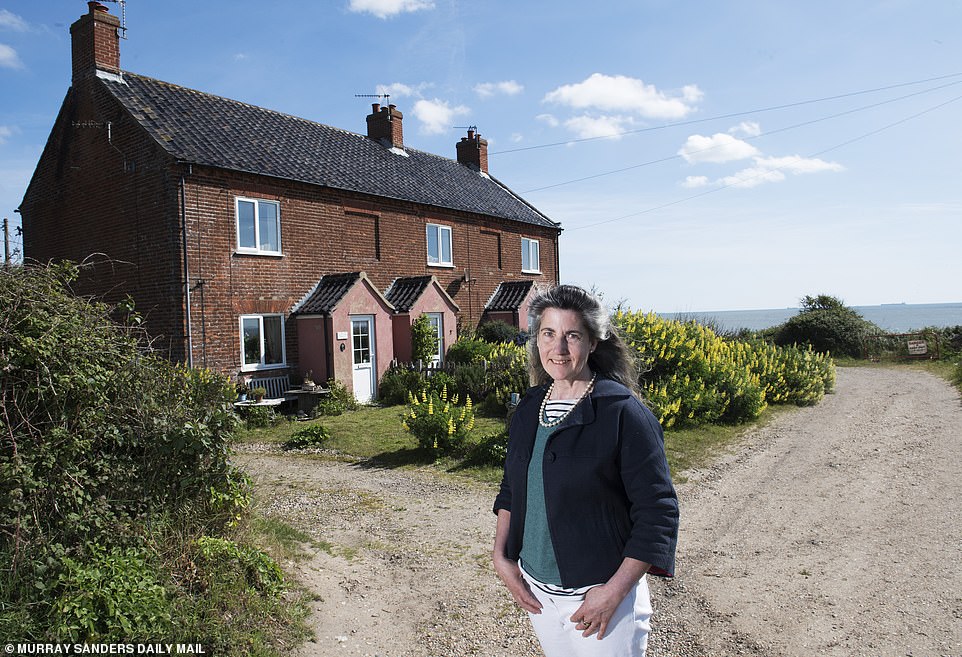 Juliet wrote a book, The Easternmost House, about life at the edge of East Anglia in a home will now be razed to the ground

She said that the house is a ‘landmark’ in Easton Bavents, East Suffolk.

The community, which lies just north of Southwold has been decimated by the incoming tide, with erosion undermining the hamlet which used to have a church, a thriving market and many houses.

Juliet and Army veteran Giles moved in 12 years ago, renting from the local farmer.

Since then the land separating them and the sea has disappeared, with the loss of several houses which have been safely demolished. 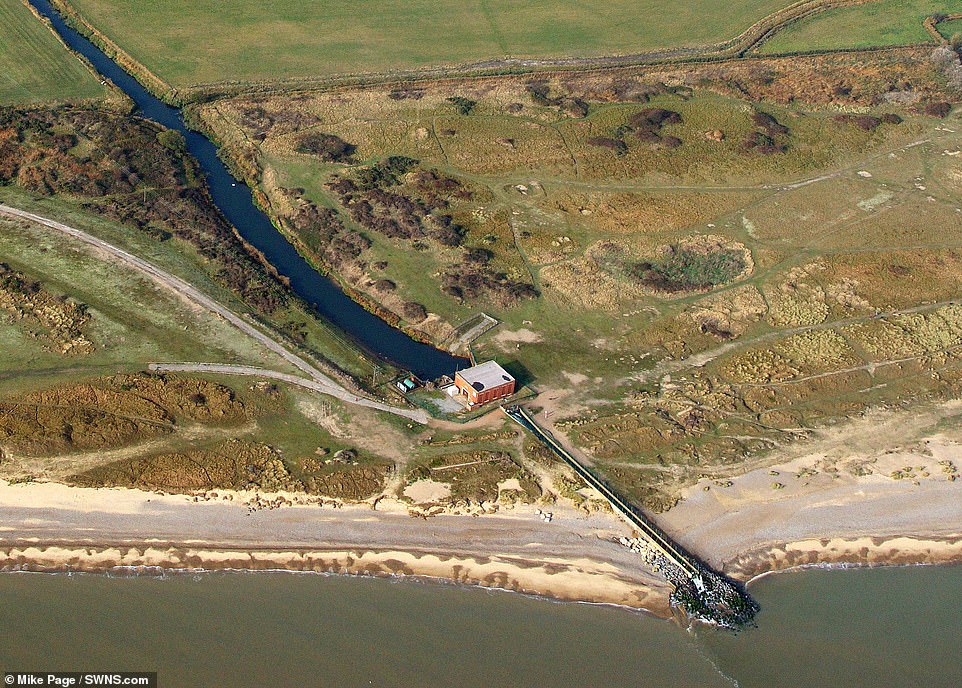 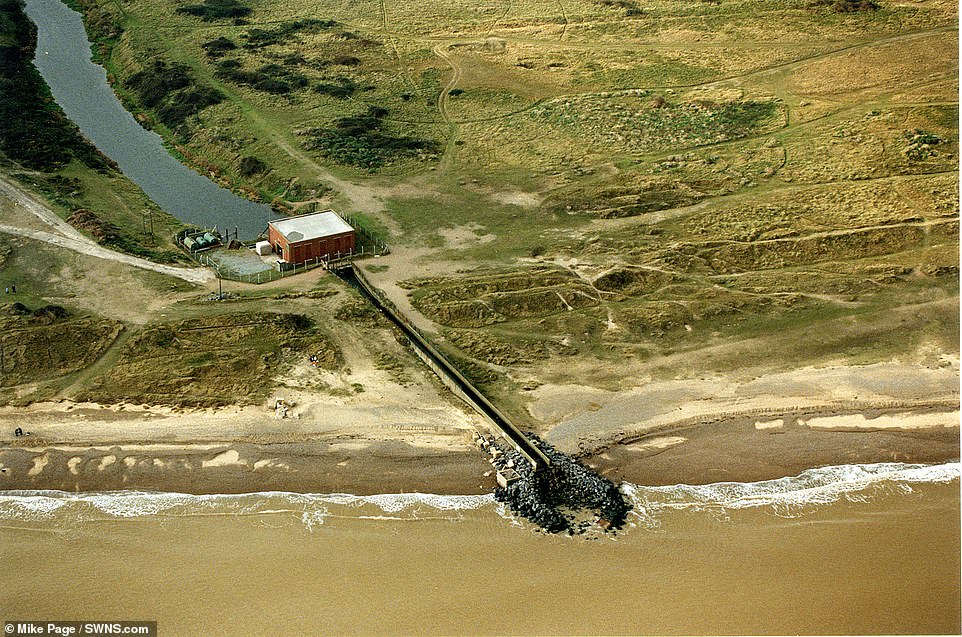 Mike Page, 79, has created a unique aerial archive showing the alarming erosion of land along the coast of East Anglia 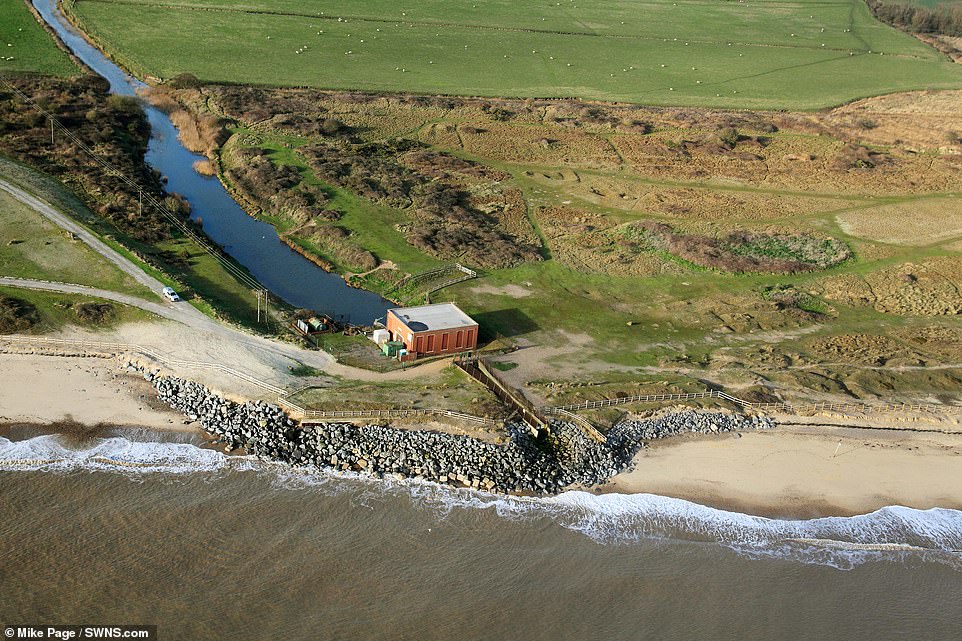 This photo set, of Benacre Pumping Station just five miles north of East Bavants, shows how the sea has encroached closer and closer to the facility over the course of the last few years

Engineers have now told the farm owner that all cottage tenants should leave – with demolition crews expected to raze the homes over Christmas.

The couple are moving to the coastal village of Benacre, which also suffers from erosion, but they believe their new home is safe from the sea for now.

Coastal Partnership East, a group formed by several local councils, has been monitoring the situation.

A spokesman said: ‘Since the 2018 Beast from the East storms we have seen significant lowering of beaches along the Norfolk and Suffolk coasts.

The couple’s ruined Christmas  comes after a map revealed the English coastal towns most likely to collapse into the sea over the next 20 years as shores continue to erode. 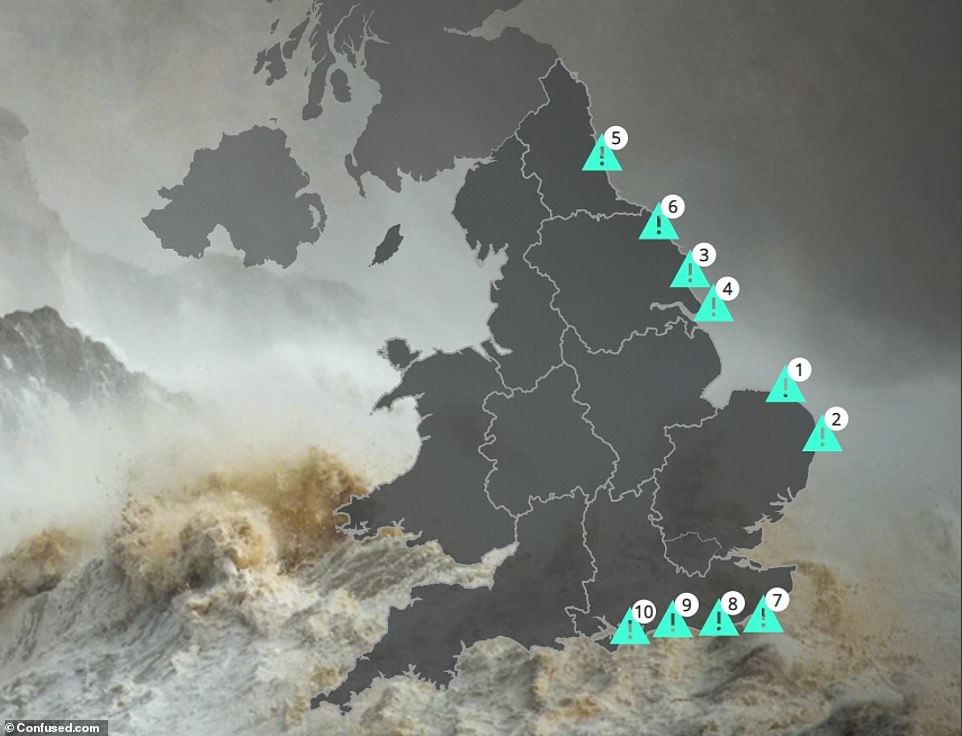 Experts said the east coast is being hardest hit, with the erosion rate the fastest in Yorkshire and the Humber, where 56 per cent of the coastline is at risk.

Alongside this, around a third of the coast in the south of England is being actively eroded — threatening such areas as Norfolk, Suffolk and East/West Sussex.

The ongoing retreat of the shoreline will cause around 7,000 homes to disappear into the sea by the end of century, experts warned — unless more action is taken.

Protection is particularly needed in the counties of Norfolk, Tyne and Wear, Suffolk and Yorkshire over the next two decades. 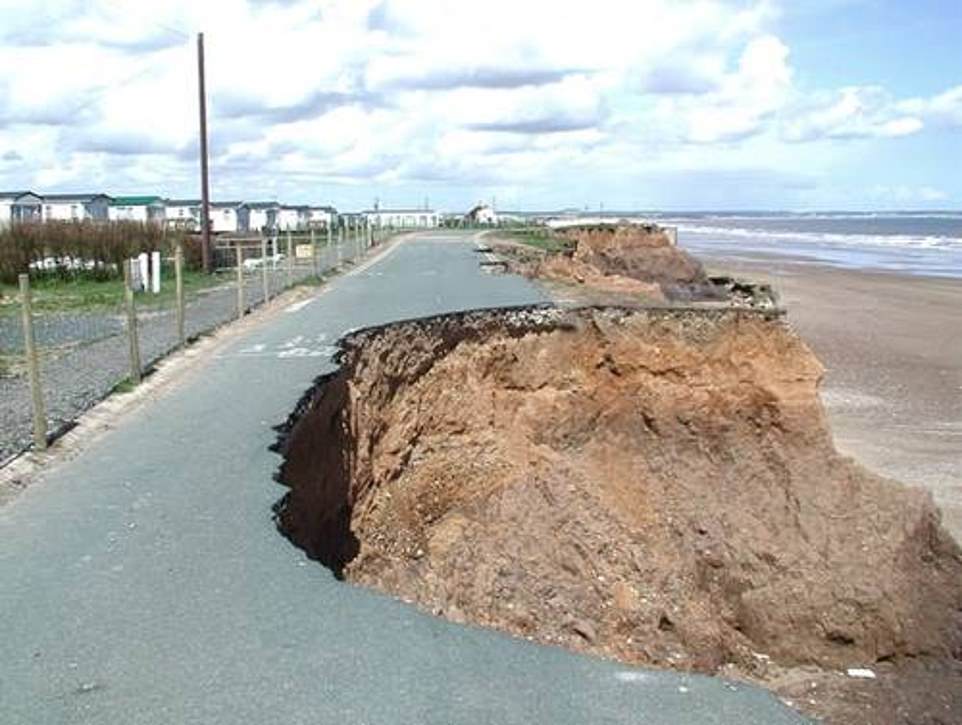 Experts found that the east coast is being hardest hit, with the erosion rate the fastest in Yorkshire and the Humber, where 56 per cent of the coastline is at risk. Pictured, a road collapsing into the sea at Skipsea Cliff, near Hornsea in Yorkshire

WHICH PARTS OF THE ENGLISH COASTLINE WILL BE THE WORST HIT BY EROSION?

The following areas of England’s coastline will be the worst hit by erosion:

This is joined by statistics from the Marine Climate Change Impacts Partnership.

The erosion figures are based on a scenario in which no active interventions are made to help halt the coastline’s retreat — and predicts the state of the UK’s vulnerable coastal areas over the next 20, 50 and 100 years.

Alongside the projected loss of thousands of homes, agency data also suggests that around 520,000 properties are presently in areas that are at risk of coastal flooding.

If no action is taken, experts warn, this figure could be trebled to around 1.5 million homes by the 2080s.

According to UK environment minister Thérèse Coffey, ‘one in six people in England are already living in properties at risk of flooding.’

This hazard is exacerbated by coastal erosion, rising sea levels and climate change.

‘Coastal erosion has become one of the most worrying issues for UK homeowners in seaside towns,’ said Confused.com head of home Tom Vaughan.

‘Our research highlights the increasing risk that many coastal residents are facing, to the point where some are ultimately looking at losing their homes over the next 20 years.’

‘As land erodes, we could be seeing more expensive insurance premiums, as the danger of damage from climate change is higher than living inland.’ 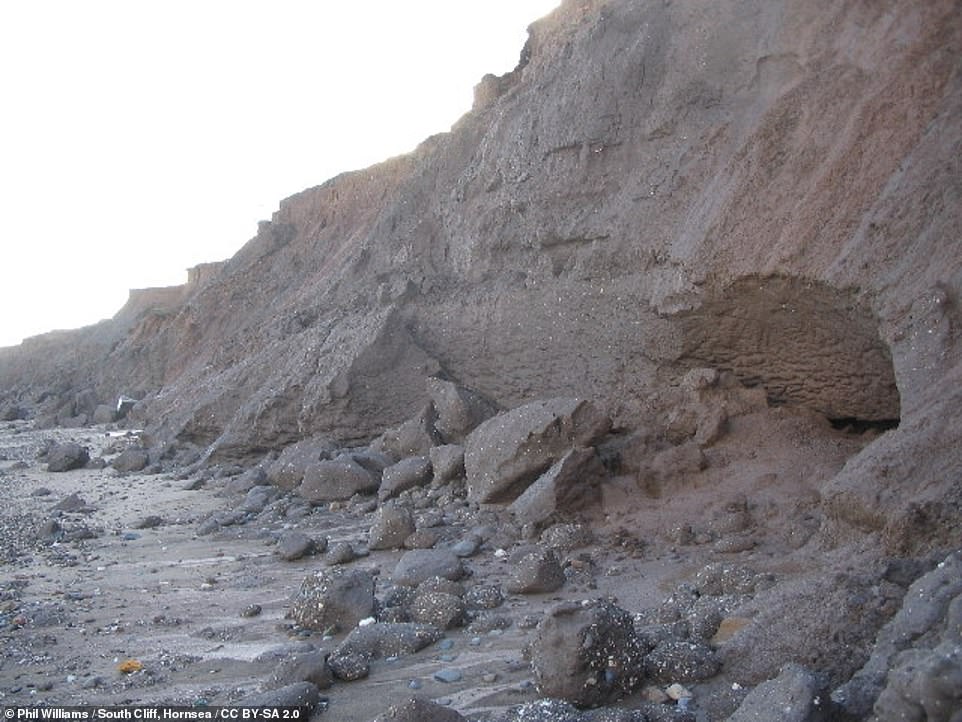 The ongoing retreat of the shoreline will cause around 7,000 homes to disappear into the sea by the end of century, experts warn — unless more action is taken. Pictured, a collapsed section of shoreline at South Cliff, Hornsea, in the East Riding of Yorkshire 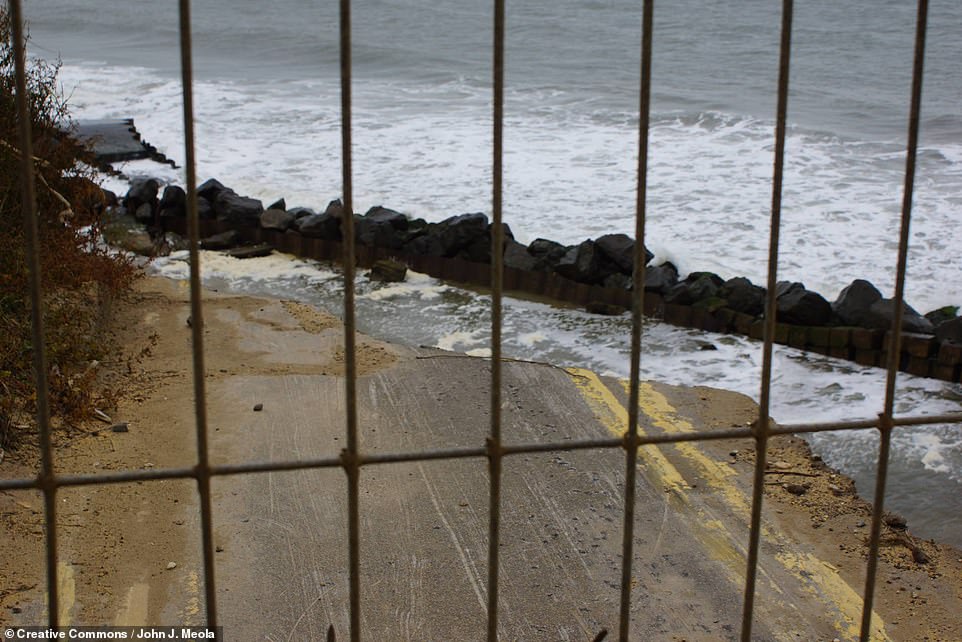 Alongside the projected loss of thousands of homes, data also suggests that around 520,000 properties are presently in areas that are at risk of coastal flooding. Pictured, the end of the road in Happisburgh, Norfolk, where washouts swept away a coastal street

The map, he added, has been designed to help people living in areas with a high risk of erosion understand what this means for them.

To this end, the map also reveals the average cost of rebuilding a home in each area to replace those lost to the sea.

According to the researchers, the worst hit town in the UK is likely to by Happisburg, in Norfolk.

The town is predicted to lose around 318 feet (97m) of coastal land in the next two decades — the equivalent length to two football pitches.

10,377 houses presently stand in the local NR12 postcode — and 35 homes have already been lost due to cliff collapse.

What is coastal erosion? How tides and geology mean some areas are far more at risk of being washed away

The occurrence of coastal erosion is dependent upon the balance between the resistance, or erodibility, of the coastline and the strength, or erosivity, of the waves and tides affecting the area.

These conditions are, in turn, reliant upon a number of factors, including topography, the composition and structure of the geological formations exposed at the coast, the state of man-made coastal defences, local currents and tidal range, wave climate (as characterised by wave height, period, direction and fetch), groundwater, sediment supply, and relative sea level.

Consequently, rates of coastal erosion and accretion are very variable at regional, national and international scales.

Coastal erosion typically results in a landward retreat of the coastline. This can increase the risk of coastal flooding and result in loss of land and damage to buildings, infrastructure and agricultural land.

Sudden coastal erosion events, particularly those in the vicinity of coastal cliffs, may directly endanger the lives of people. The movement of salt-water into freshwater areas (saline intrusion) can occur during coastal flooding and can impact upon the biodiversity of previously freshwater or terrestrial ecosystems.

Dozens of caravans worth up to £100,000 on the brink of falling into the sea… while the clock ticks after fresh 160ft crack rips open cliff

Earlier this year devastated caravan owners were warned they must move their £100,000 seaside holiday homes after a 160ft crack opened on the cliff where they are parked.

A drone captured extraordinary footage of holiday homes perching perilously on the edge of the cliff face along the Hornsea coast in east Yorkshire.

Now dozens of the properties at Longbeach Leisure Park will have to be moved because they are at risk of plunging onto the beach below, officials have warned. 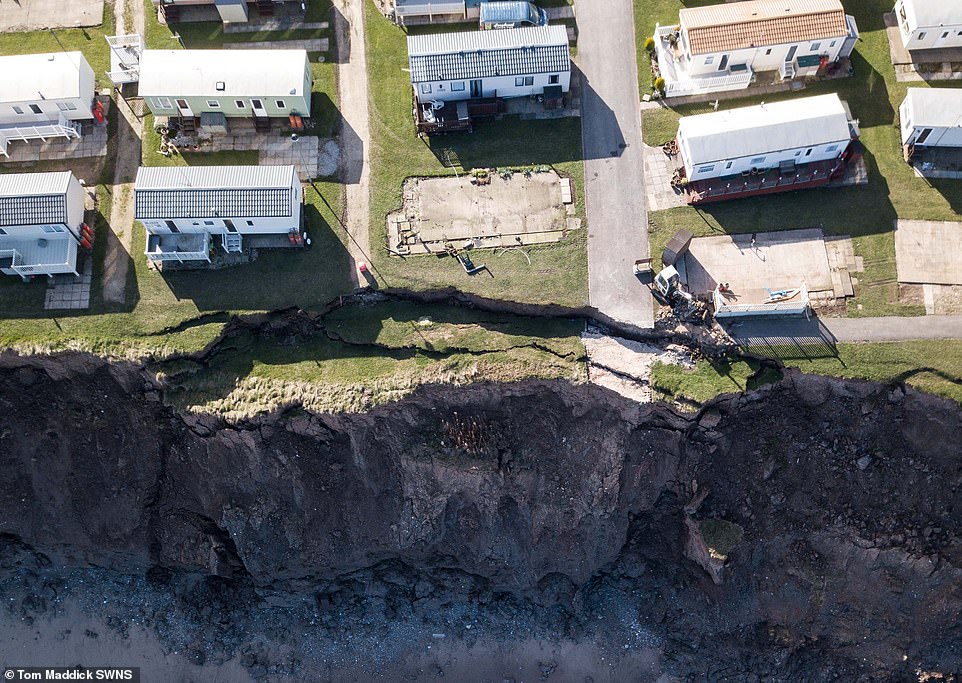 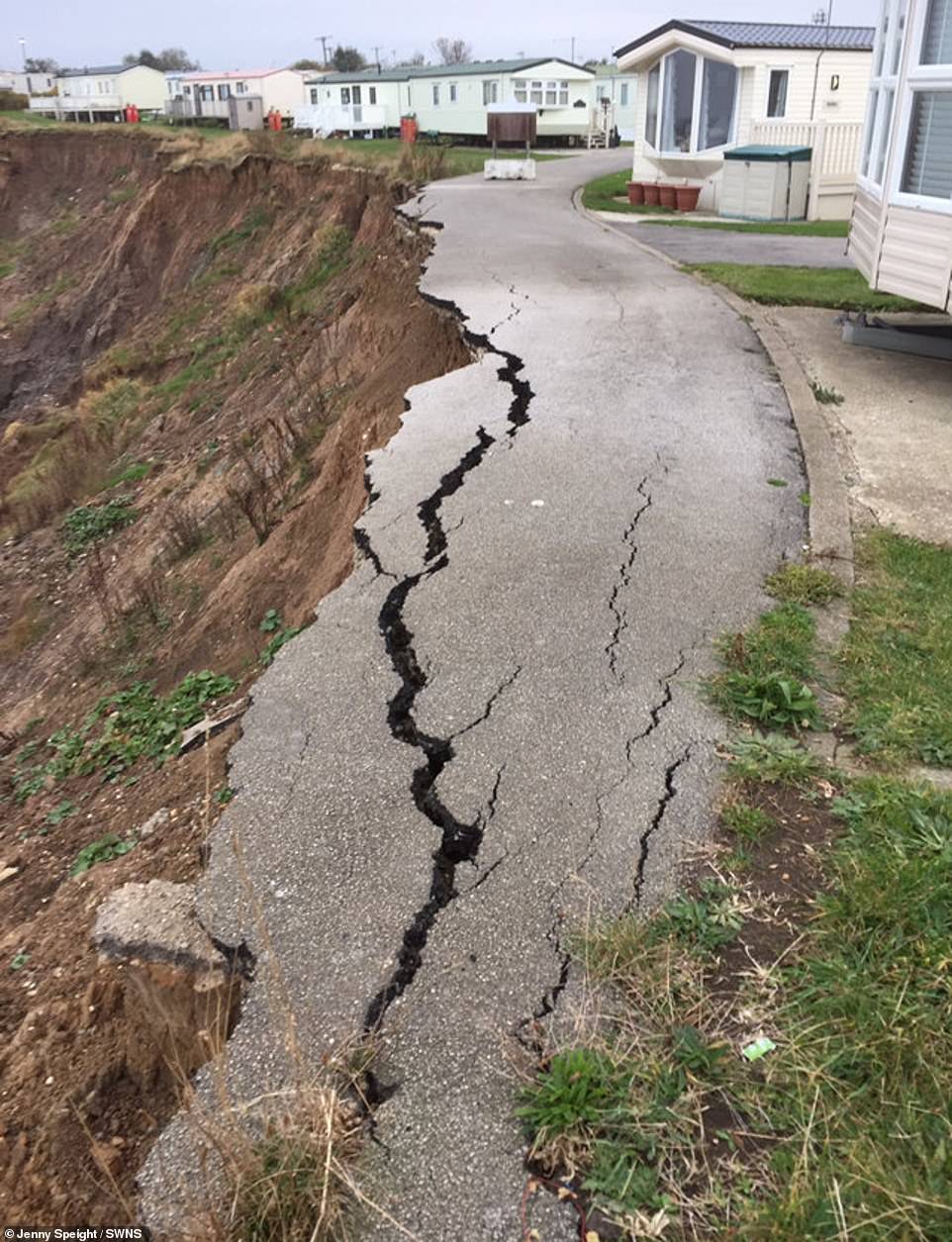 The coast is eroding at a rate of 7.5ft per year according to the local council, which says there is a ‘need to relocate or remove caravan pitches from the site’ 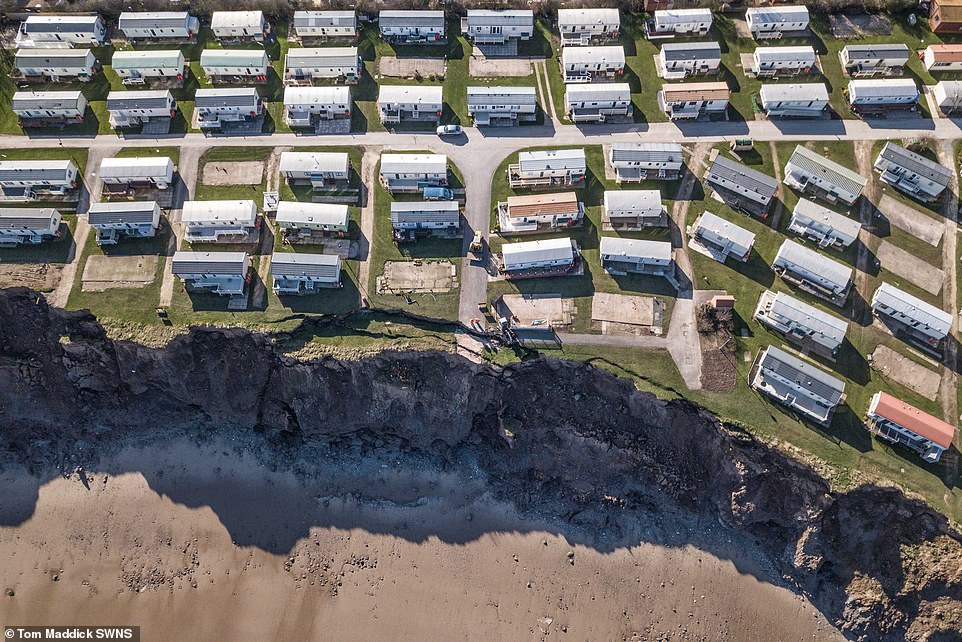 The coast is eroding at a rate of 7.5ft per year according to the local council, which says there is a ‘need to relocate or remove caravan pitches from the site’.

Twelve of the homes were relocated early this year.

Caravan owner Jenny Speight, 71, has owned four different properties on the site in the last 33 years.

Just five years after purchasing the home which offers sweeping views over the beach, Mrs Speight was told she would have to relocate in January.

Mrs Speight, who visits the £45,000 property most weekends with husband Brian Speight, 76, from their home in Bradford, West Yorkshire, were offered a plot further away from the cliff edge.

Their caravan, which is on wheels, was maneuvered between other caravans and towed to an empty plot one row back from its previous position. The couple retain a sea view in their new plot, and because the council have ordered for the caravan to be moved for safety reasons, the cost of the operation was borne by the site itself. 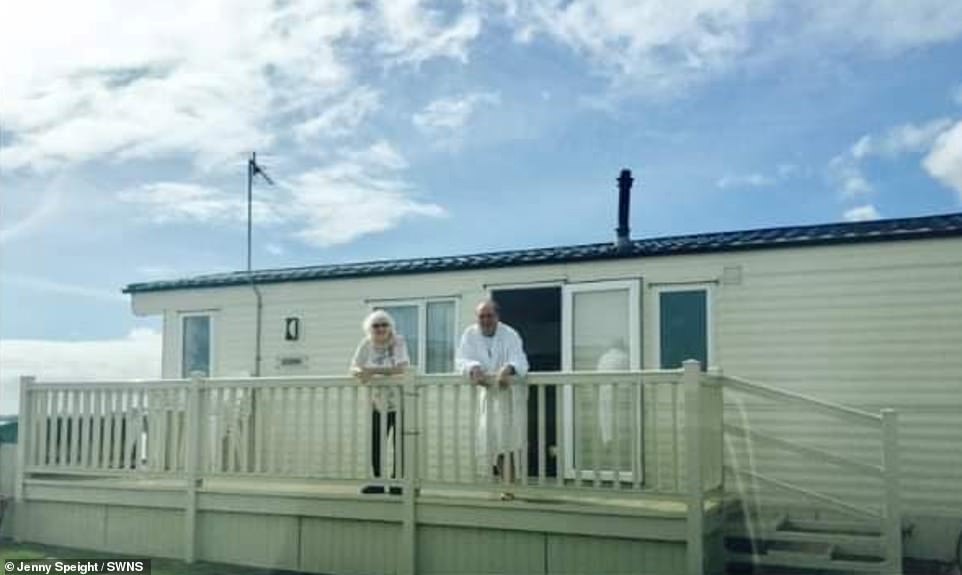 Caravan owner Jenny Speight, 71, (pictured with her husband) has owned four different properties on the site in the last 33 years, but has now been told she must move 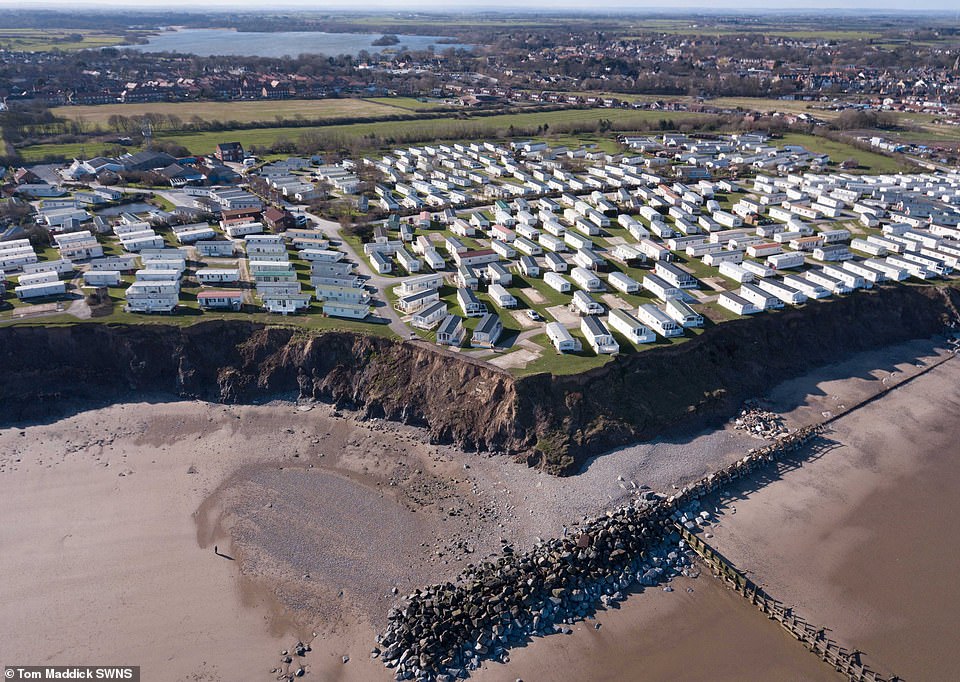 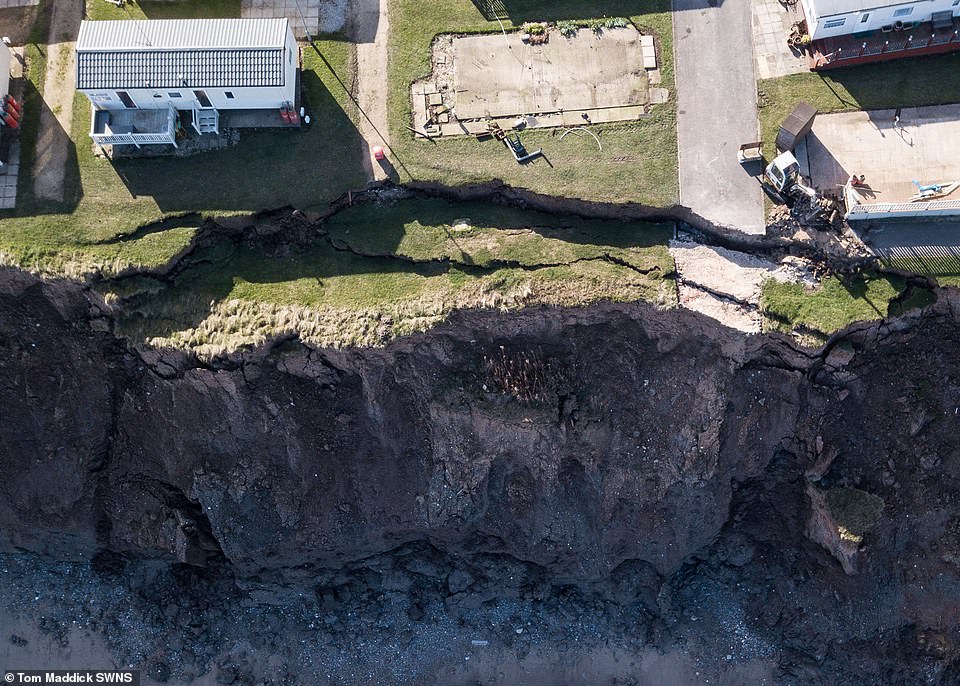 She said in March: ‘I thought we would at least see the year out here but with the weather and how quickly the cliff is eroding, we have been told we need to get out as soon as possible.

‘Our home is directly on the cliff front so we have the best views possible, the views are incredible.

‘It is such a shame. We knew when we bought the home this day would come but we didn’t think it would be so soon.

‘We have been on the site for 33 years and seen many changes but this is the worst the erosion has ever been.’

Mrs Speight added: ‘It is very annoying as we are going to lose the direct sea view. It could be as soon as this weekend when the work begins, we are thinking of going to help get everything together.

‘Thankfully the new plot has become available which is not very far away but we will have to walk to get the same view now which is disappointing.

‘At least the homes can be transported, if they were made of bricks and mortar it would be much more difficult.’ 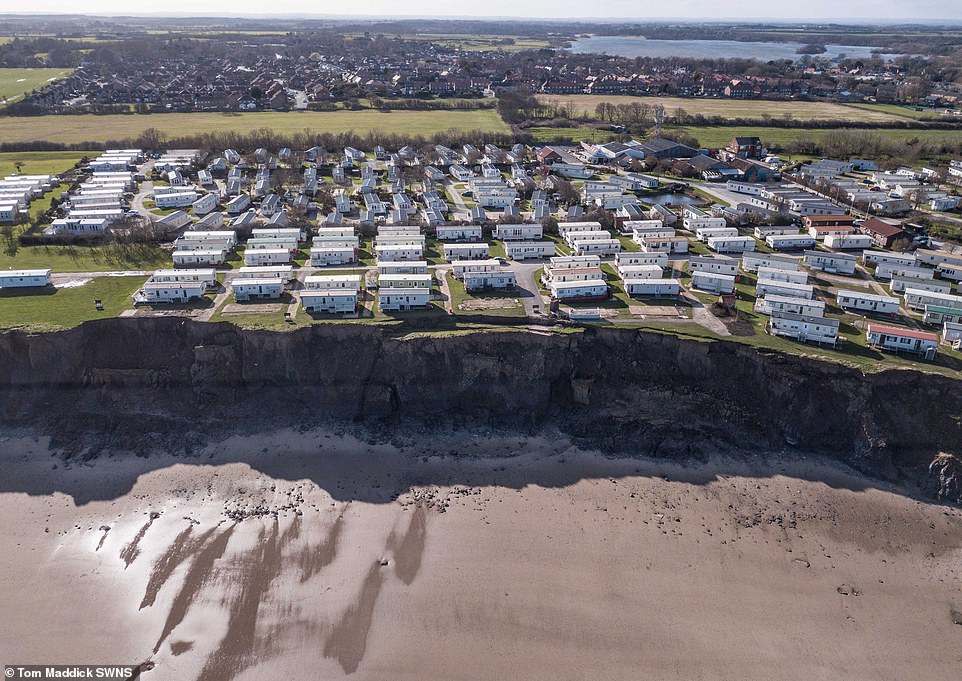