War of the hoses: Retired quantity surveyor and his wife, both 73, are hauled into court after threatening to spray their MBE-winning neighbour with garden pipe again

A retired quantity surveyor and his wife involved in the ‘war of the hoses’ with their neighbour were back in court today – for ignoring a restraining order.

Magistrates at Llandudno, North Wales, heard Barry Lee and Hellynne Lee, both 73, had shouted ‘we will get her on the way back’ as an ex-ambulance chief, aged 71, walked past their home in July.

Prosecutor Nicola Williams said it was a ‘deliberate’ breach  of the restraining order imposed on the Lees at the time which banned communication with neighbours Harold and Jean Burrows.

The breach followed a common assault case in November 2019 after the Lees soaked Mr Burrows, a former regional staff officer for the ambulance service, with a hosepipe.

The drenching was captured on a GoPro video camera worn by Mr Burrows, a search team volunteer awarded an MBE. 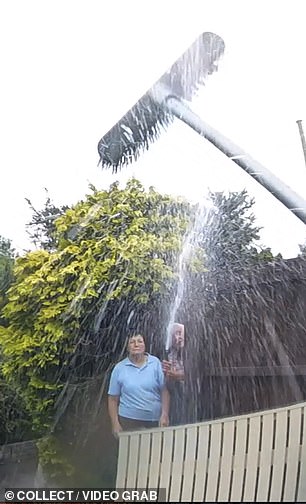 Barry and Hellynne Lee (left) assaulting their neighbour Harold Burrow with water from the hosepipe in November 2019 (right). The couple were handed a restraining order which was extended after they threatened to do the same again – a ‘deliberate’ breach of the court order

For nearly 20 years the Burrows’ had lived at Cae Fron, Denbigh, a neat private estate, but they had a number of difficulties with the Lees.

‘We really don’t want to see anybody in this court again for something like this,’ magistrate Robert Bradley had told the Lees last year.

But now the couple have come back before the same court chairman who extended the restraining order by twelve months until November 2022.

The magistrates also banned the Lees from Cae Fron after hearing they had moved to St James Drive, Prestatyn.

The pensioners were fined £200 each and ordered to pay £119 costs after they admitted the breach.

Mr Bradley said he had told them the court didn’t expect any more of their ‘silly’ behaviour.

He warned the Lees: ‘Make no mistake – should you breach this order again it will be more severe next time.’ 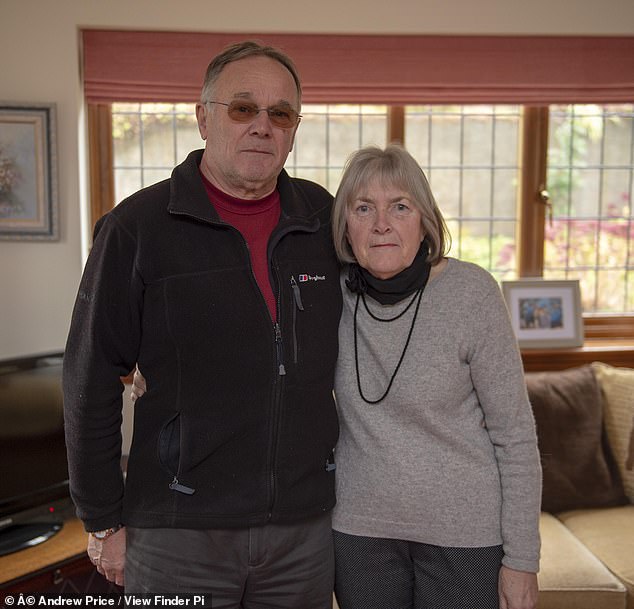 Harold Burrows, pictured with wife Jean, says he is looking forward to peace after neighbours, who drenched him with hosepipe, were made subject of restraining order and moved away

Defence solicitor Andrew Hutchinson said the likelihood of further contact was ‘zero’. Mr Lee claimed he lost his temper after an ‘element of provocation’.

The Lees’ weren’t in the best of health, the lawyer added. Their home was sold, subject to contract.

At the original case the couple’s solicitor had said there was a boundary dispute because when the estate was built the developers hadn’t followed the plans.

After today’s case Mr Burrows, who alleged other incidents, said: ‘It’s very much the end of a nightmare. I’m just pleased it’s all over and they have moved.

‘I’m looking forward to having new neighbours and living in peace and quiet where my wife can walk to do her shopping without fear of them coming out and abusing her.

‘When we first heard they were moving we were over the moon, then Covid hit.’