A couple who attacked their 17-year-old son after he went to see his girlfriend when he was grounded have been spared jail after she became pregnant with his child.

Craig Carroll, 41, and his wife Denise, 39, had a violent showdown with their son Joshua after realising he had ignored them and gone to see Tania Finn.

They stormed round to her home in Middleton, Greater Manchester, and demanded Joshua leave.

When he refused Mrs Carroll pushed her son before her husband threw punches at him, causing the youngster to momentarily lose consciousness.

Craig Carroll, 41, and his wife Denise, 39, had a violent showdown with their son Joshua after realising he had ignored them and gone to see Tania Finn

The attack happened while the couple’s teenage daughter and children from Tania’s family looked on.

Joshua, now 18, initially gave a statement to police about the attack but later retracted it and is now living back home with his parents.

The Carrolls believed Joshua was being ‘manipulated’ by his girlfriend and subjected her family to a campaign of intimidation to try and get them to break up.

Tania, who lives with her mother, Donna, moved away from the area because of the intimidation she suffered.

She later broke up with Joshua but has since announced she is expecting his baby. It is not known when the child was conceived.

At Minshull Street Crown Court, Manchester the Carrolls, from Heywood, near Rochdale faced jail over the attack on April 15 last year but were freed after Joshua issued a plea not to have his ‘family ripped apart.’

Prosecutor Hayley Bennett said: ‘Joshua had been grounded and was not supposed to be out of the house but he went round to see his girlfriend.

‘Joshua said in his original interview he lost consciousness briefly for two minutes but was very very brief. He was punched several times to the face.

‘However he now talks about how since this incident he has come to reconcile with his family and after some time living with his grandmother he now lives back together with his parents.’ 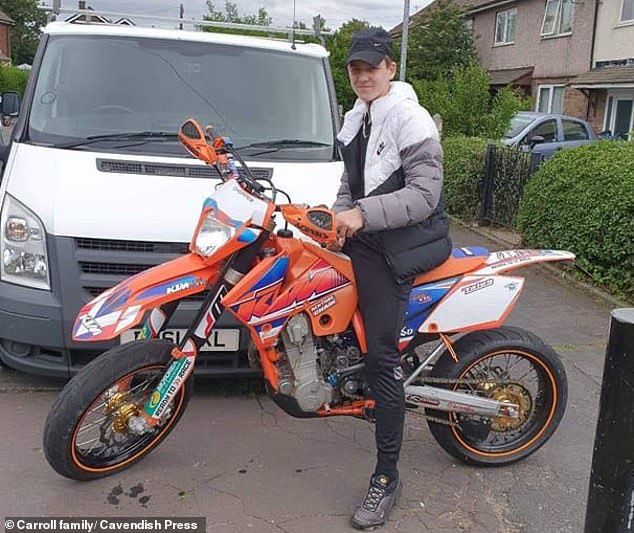 They stormed round to her home in Middleton, Greater Manchester, and demanded Joshua (pictured) leave

The prosecutor explained how Tania and her mother were forced to move home due to threats from the Carroll family, who also pelted their house with planks of wood.

Initial charges against the couple of attempted burglary with intent to inflict grievous bodily harm were dropped at an earlier hearing.

In mitigation for Mrs Carroll, defence lawyer Huw Edwards said: ‘Matters have been resolved between her and Joshua and he is actually here today in support of them and sits at the back of court. As of May Joshua has been living back at the family home.

‘Matters have been resolved between the parties and there are no longer issues between the family and any members.

‘Tania is due to have a child today or very soon. It’s a very difficult situation. Joshua is not living with her anymore and is living back with his parents but between them at least matters have been resolved.’

Judge Angela Nield said: ‘What does concern me is that Tania is expecting a baby. It’s better if both families can speak to each other because of the imminent arrival of a baby.’

Her husband pleaded guilty to affray and assault occasioning actual bodily harm and was sentenced to six months jail suspended for 18 months.

He was also ordered to complete 150 hours unpaid work and 30 rehabilitation requirement day. 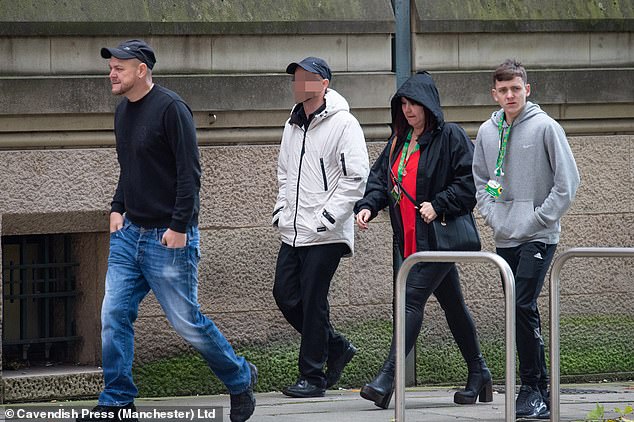 Joshua (far right) later withdrew his police statement and is now living back with his parents. Craig is seen on the left and Denise on the right next to Joshua, outside Manchester Crown Court

Sentencing, Judge Nield said: ‘Your son had a measure of vulnerability and you both believed he was being exploited.

‘Rightly or wrongly that belief appears to have been strongly felt and to a measure confirmed through Joshua and his more recently expressed views.

‘However, understandable might have been the background to what happened, it was wholly unacceptable behaviour and certainly from your point of view Mr Carroll it’s set against a background of boiling frustration which led to the behaviour in a manner that has brought you both before these courts.

‘It is ironic that your anger Mr Carroll was directed towards the very individual you sought to protect.’