Don’t look down! Workman dangles 150ft up as council sends ABSEILING team to remove windowsill plant pots – all in the name of health and safety

By Nick Fagge For Mail Online

A workman dangles 150ft feet in the air after a council sent in its ‘abseiling team’  to remove ‘dangerous’ window boxes from a block of flats – all in the name of health and safety.

Tenants at the central London block were met with the nerve-jangling sight of the workman wearing a harness and hi-vis jacket six floors up on Friday morning.

Camden Council sent residents of Gordon Mansions a letter giving them eight days to remove their plant pots – or the ‘rope access team’ would take them.

In the sternly-worded warning to residents calling the pots ‘dangerous’, housing officer Abdulrahman Gesod warned they had until November 27 to remove them.

‘The Council’s Health and Safety department has assessed plant pots on window sills and balcony ledges and it was determined there is a demonstrable risk to pedestrians when pots are placed on such areas higher than the ground,’ he wrote.

A workman in hard hat, hi-vis jacket and harness abseils down Gordon Mansions, central London on Friday morning – after Camden Council threatened to use its ‘rope access team’ to clear window boxes in the name of health and safety

So when the workman appeared above their flats last week and started removing some plant pots from the roof, residents assumed the council was carrying out its threat.

Speaking to MailOnline, one tenant said: ‘I couldn’t believe what I was seeing. I looked out of my window and I saw a bunch of roofers abseiling down the building.

‘It’s a massive over-reaction at a time when surely the council has bigger things to worry about – like the Covid-19 pandemic. 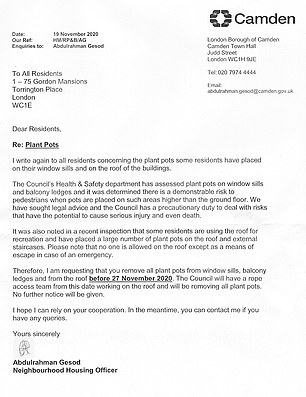 However, it has now emerged that the team were only carrying out urgent repairs to the roof and had a last-minute change of heart about clearing the window boxes following the intervention by a local councillor.

‘Their timing and lack of communication at a time of such heightened anxiety is totally rubbish. Everybody is freaked out by coronavirus already.

‘So to have men landing on your balcony from a rope is dangerous and frightening,’ added the resident.

Retired architect Simon Condor explained: ‘The council wanted to employ some roofers who were going to drop six storeys and remove a large number of flower pots. It has created a fantastic fuss.’

Another, unhappy with the council’s approach, said: ‘I’ve lived here for 12 years and there have always been window boxes. People grow flowers and herbs and small shrubs.

‘For some residents who have been isolating or are shielding this is the only greenery they have seen for months.

‘No who lives here has a garden. This is the only way we can grow plants.’ 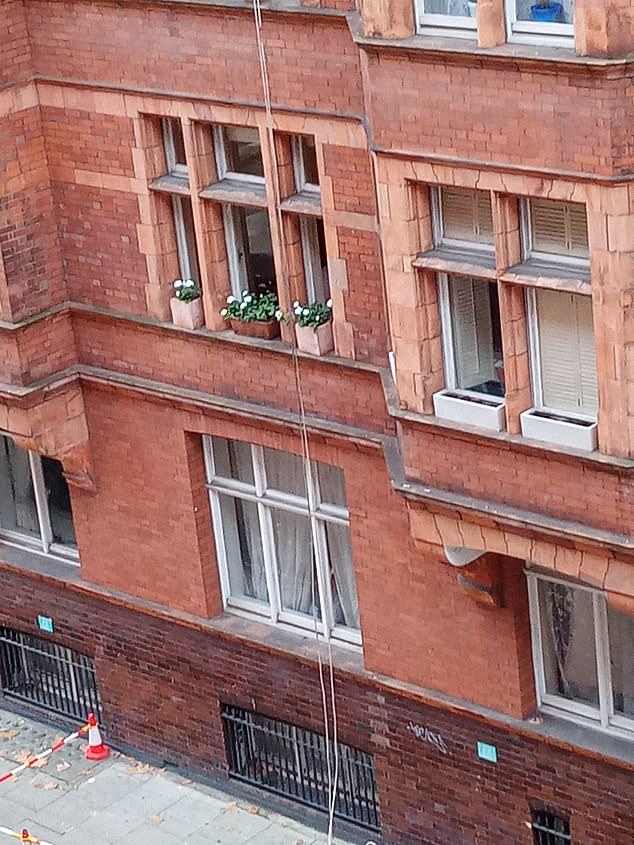 The decision was reversed following intervention on behalf of the angry residents by ward councillor Adam Harrison, who the tenants called ‘a hero’.

A spokesman for Camden Council confirmed the bizarre U-turn – and confirmed that the pots would be staying.

They told MailOnline: ‘Abseilers were required to safely inspect a roof leak that is difficult to access.

‘While they were accessing the roof some flower pots may have been temporarily moved and stored to ensure the safety of those using the road below.

‘These works have now been completed and any flower pots that were moved have been returned.’