EXPRESS INFORMER > News & Politics > Could your home’s energy efficiency rating stop you getting a future mortgage?

Those living in energy inefficient homes could soon find it harder to get a mortgage, after a Government report called on lenders to help improve energy performance.

Mortgage lenders may soon be required to track and annually disclose the average Energy Performance Certificate rating of the properties they lend against.

The Government could then use this information to publish ‘lender league tables’ based on the average EPC ratings within their portfolios.

Internal wall insulation is a cost-effective way of improving your EPC rating. However, it compromises your internal floor space, which may be a concern for those in smaller homes

Lenders could also be set ambitious targets relating to energy performance and be required to factor these into their lending decisions.

The move is intended to send a clear signal to borrowers about the importance of their homes’ energy performance.

The report was published by the Department for Business, Energy and Industrial Strategy, and the Government is planning to publish its response later this year.

‘They are uniquely placed to influence mortgagors at critical trigger points, such as home purchase, renovation or re-mortgage,’ the report stated.

It also proposed that lenders be encouraged to offer additional borrowing to existing customers to improve the energy performance of their homes.

What is an EPC rating?

EPC is a rating scheme which puts properties in bands from A to G, with an A rating being the most efficient and G the least.

EPCs have been required for all properties sold since August 2007, and for all rented properties since October 2008.

At present the Government aims to upgrade as many homes as possible to an EPC rating of C by 2035.

The Climate Change Committee has, however, recommended that this deadline should be brought forward to as early as 2028. 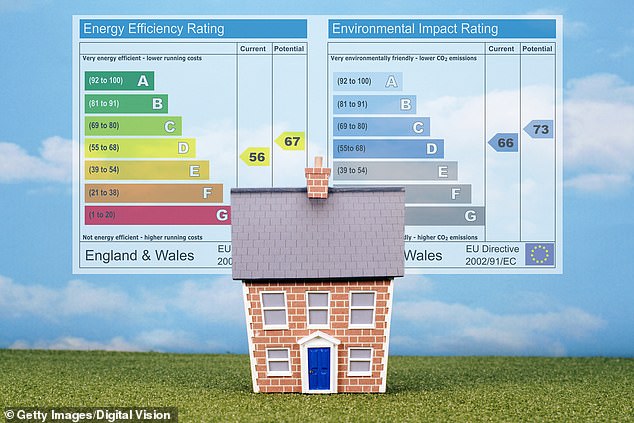 The CCC is proposing all UK homes reach an EPC of band C by 2028 in order to help the Government meet its net zero carbon target by 2050.

There are currently about 29 million homes in the UK, of which 19 million have an EPC lower than C, according to the CCC.

In order to improve a property’s EPC rating, an owner will need to make improvements to make it more energy efficient.

Fitting loft, under floor or cavity wall insulation; upgrading to double or triple glazed windows; draught proofing and hot water tank insulation are just some examples of improvements that can boost an EPC rating.

According to BEIS, the average energy running costs for a home with an EPC rating of C in England are around £300 cheaper than for a band D home, and £740 less than for a band E home.

What does this mean for mortgage holders?

Around seven million homes in the UK are owned with a mortgage, and many of these borrowers – particularly those in older properties – are at risk of being impacted if the Government acts on these recommendations.

There is a danger that mortgage lending decisions might soon be dependent on a property’s EPC, as well as the borrower’s suitability.

‘If lenders feel obliged to decline loan applications in order to improve their average EPC ratings, borrowers living in poorly-rated properties may find it harder to sell their property or even remortgage in the future,’ says Kate Davies, executive director of the Intermediary Mortgage Lenders Association.

‘It risks creating a new cohort of mortgage prisoners trapped in energy-inefficient homes and paying their lender’s higher standard variable rate because they are not able to remortgage.’

The creation of EPC league tables, targets and potential penalties for lenders will not help matters, according to the IMLA.

‘The introduction of targets – whether voluntary or mandatory – and penalties for failing to meet those targets will only make it more likely that lenders would seek to avoid low-EPC properties,’ says Davies.

Get a green homes grant

In August 2020, the Government unveiled a green homes grant which is available to those making energy efficient improvements to their homes.

Homeowners and landlords in England can apply for a voucher towards the cost of installing energy efficient and low-carbon heating improvements to homes. Making these changes could help save up to £600 a year on energy bills.

The Government will provide a voucher that covers up to two thirds of the cost of qualifying improvements to your home.

The maximum value of the voucher for most households is £5,000.

You may be able to receive a higher level of subsidy if you are a homeowner and either you or a member of your household receives one of the qualifying means-tested benefits, covering 100 per cent of the cost of the improvements.

The maximum value of these vouchers is £10,000. Landlords cannot apply for the low-income part of the scheme.

‘The targets themselves will not improve individual properties – they will only reflect the fact that the lender has a higher number of better-rated properties in its portfolio.

‘Penalties for failing to meet arbitrary targets are a complete distraction from what should be the main focus – finding ways of helping homeowners make their properties more energy-efficient.’

There are also concerns over the costs involved, and the support that will be in place to help homeowners improve their properties.

BEIS says that the average cost per household to achieve an EPC rating of C is around £4,000. Last year, the Government launched its green homes grant scheme to help with the costs of making a home more energy efficient.

‘If lenders are at all disincentivised from lending on low-EPC properties, the consequences have to be managed extremely carefully and there needs to be adequate resources in place for those unable to improve their homes to new lending standards,’ says Chris Sykes, mortgage consultant at Private Finance.

‘It is going to be the most vulnerable who could suffer most, who perhaps are struggling with their mortgage already, since they will either have to pay more for their mortgage due to their EPC rating or be unable to switch lenders at all because of it.

‘It could create a crisis if not managed properly.’

There are also concerns about the implications this might have for the property market as a whole.

‘It could devalue properties, potentially creating negative equity for some of the high loan-to-value, first-time buyer borrowers the Government has spent years incentivising to get on the property ladder,’ says Sykes.

‘Many first-time buyers opt for older properties, as they are all they can afford and some of these will come with lower EPC ratings.’

But it could affect people at the other end of the property ladder, too.

‘It could even create problems for older borrowers who want to move in later life, but who do not have the income in retirement for a large financial outlay in order to improve the efficiency standards of their property,’ adds Davies.

Some lenders are now offering green mortgages which provide a lower rate for customers in energy-efficient homes – often those rated C and above.

One in five lenders now has a product of this type in their range, according to the IMLA, while a further 21 per cent offer mortgages with a financial incentives that encourage borrowers to improve their homes energy efficiency.

‘Natwest give a slightly lower interest rate – usually no more than a 0.05 per cent discount, on a relatively new product for properties purchased with very high EPCs,’ says Sykes.

‘I also know Barclays have a green mortgage offering, whilst Kensington reward those who increase the EPC rating of a property after purchase, if on a specific loan package.’