Investors are always encouraged to think long term. The message usually goes as follows: ‘Don’t invest unless you are prepared to take at least a five-year view – preferably ten years – and invest through a fund that has a diversified portfolio of stocks.’

It’s a sensible investment mantra which we in Wealth – and the experts we speak to – preach all the time.

But what about those bold investors who are happy to look even further into the future and take a calculated risk on investing in themes and companies which are expected to dominate the way our world looks in 20 years’ time?

Next big thing: Will the flying taxi take off – or fade away like the tape player?

For example, investors putting money aside on behalf of a child inside a tax-friendly Junior Individual Savings Account – and are happy to speculate in order to accumulate?

Of course, identifying emerging trends that might come good in the long term is extremely hard work. As Dan Lane, senior analyst at investment platform Freetrade, says: ‘We don’t know the future and even if we happen upon an idea that seems a good one, there’s no telling how long it will last.’

From personal experience, Lane recalls the hours he spent as a teenager in the 1990s recording albums on to MiniDisc.

When launched by Sony, it was viewed as the successor to the CD and cassette tapes because of its crystal clear sound quality. Yet despite Sony throwing big money at the storage system – including a major relaunch in 1998 – it failed. Digital music and the rise of MP3 killed it off.

Yet, for investors prepared to speculate on behalf of a child – or apportion a slice of their investment portfolio (fun money) to racy opportunities – there are themes and companies which could (I stress the word ‘could’) come good between now and 2042. They include everything from self-driving cars and flying taxis, cutting-edge healthcare technology, through to space tourism and solutions to decarbon the globe.

The shift to electric vehicles is ramping up with a ban on new petrol and diesel-fuelled cars due to come into force in 2030.

Last month, a record number of electric vehicles (more than 39,000) were registered in the UK – a figure higher than for all electric car sales in 2019.

Make no mistake, the new automobile revolution is taking shape. Toyota and Ford, and technology giants Apple and Alphabet, are spending megabucks on ensuring they are frontrunners in the development of self-driving cars. ‘The benefit of self-driving vehicles is clear,’ says Laith Khalaf, head of investment analysis at investment platform AJ Bell.

‘But they aren’t going to be let loose on the road until they are proven to be safe. Even assuming that happens, there are still questions around who will be responsible for the inevitable accidents that occur – and how that will play out in the car insurance market.’

An investment in the shares of Apple, Alphabet, Ford and Toyota is an obvious way into this investment theme. An alternative is to buy shares in a company such as Nvidia (US listed) which provides the microchips (brains) that enable the vehicles to self-drive.

A more diversified approach would be to buy shares in a fund such as iShares Electric Vehicles and Driving Technology. Among its top 10 holdings are Ford, Nvidia and Toyota – as well as electric car manufacturer Tesla and US-based Eaton which has developed an autonomous driving system for commercial vehicles.

Khalaf is also excited by the development of flying air taxis by German company Lilium – something he finds ‘astonishing and ambitious’. The latest accounts for investment trust Scottish Mortgage show that the £13.8billion fund has a tiny stake in the unlisted company, equivalent to 0.3 per cent of assets.

Its hope is that like many of its stakes in private companies, the business will seek a stock market listing at some stage, making big profits for the fund.

Commercial space travel is seen as an exciting industry of the future – and a long-term investment opportunity. It has attracted some of the globe’s most successful businessmen such as Sir Richard Branson, Elon Musk (of Tesla fame and who last week made an audacious bid to buy social media company Twitter) and Amazon founder Jeff Bezos.

Although Virgin Galactic, Branson’s space tourism company, has had teething issues, it could start commercial flights later this year.

This is dependent upon whether safety issues detected in Branson’s eye-catching journey to the edge of space last year aboard Virgin Galactic are addressed to the satisfaction of US aviation regulators.

Blue Origin, a rival space travel company owned by Bezos, plans to build a commercial space station that will include a hotel. Meanwhile, Musk’s SpaceX company has been launching its Falcon 9 rockets into space weekly since the start of the year.

Scottish Mortgage has just over 1 per cent of its assets in unlisted SpaceX. It also has a tiny holding in rocket manufacturer Relativity, also unlisted.

The excitement over the commercialisation of space prompted the launch last year of investment trust Seraphim Space.

The £250million fund has 23 investments including relatively new positions in unlisted satellite removal company Astroscale, headquartered in Tokyo, and satellite specialist Hawkeye 360, based in the United States.

It adds: ‘Given Seraphim’s focus, it should appeal to growth-orientated investors with long-term investment horizons and a suitable attitude to risk.’

The risks, it adds, include potential failure of the technology that some of its holdings are involved in – and the illiquidity of its unlisted investments. The trust’s share price is around £1.07, compared to £1 at launch last July.

A more measured investment approach is to invest in a fund such as Montanaro Global Innovation. Its biggest holding is a 3.8 per cent stake in SiTime, listed on the US Nasdaq stock market.

The company sells its cutting-edge silicon-based timing chips to SpaceX, which values their resilience in extreme environments. The fund, launched last June, has seen its share price fall by nearly 15 per cent.

MEDICAL ADVANCES AND THE ENVIRONMENT

The use of technology in healthcare is seen by some fund managers as an investment theme that will sustain itself long into the future.

Ken Wooton is manager of investment trust Strategic Equity Capital, a £200million fund that invests in small listed UK companies. He believes the use of artificial intelligence software in healthcare to help improve the quality of medical diagnoses will expand greatly over the next 20 years.

Wooton, who works for Gresham House Asset Management, has more than 10 per cent of the trust’s assets in UK tech company Medica. It provides software that assists healthcare specialists process radiology results. 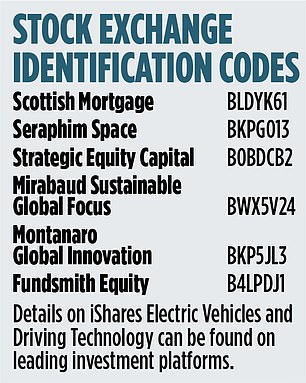 ‘Technology is becoming increasingly important in areas such as brain scans where imaging and diagnoses are complex,’ he says.

Wooton believes the company has the potential to ‘accelerate its earnings growth in the long term’. Over the past year, Medica’s share price is up 3 per cent.

Among his favourite stock picks are robotics surgery specialist Intuitive Surgical and Thermo Fischer Scientific, both US listed.

Smith is a fan of companies that address basic needs such as food, healthcare, sport and technology. ‘They offer sustainable, long-term organic business growth,’ he says. Companies fitting this bill include Alphabet, Amazon, Nestle, PepsiCo Nike and Microsoft.

Finally, Anu Narula, a fund manager at wealth manager Mirabaud, says decarbonisation will be a key investment theme in the next 20 years.

It will lead to a massive increase in solar energy, growing by more than 8 per cent a year through to 2050 to ‘meet global energy demand and contain global warming’, he adds. Narula says Enphase Energy, a US residential solar technology business, should benefit from this long-term trend.

‘It produces microinverters that help improve the performance and lifespan of solar panels,’ he says. It is a holding in the fund he runs, Mirabaud Sustainable Global Focus.

Not everyone believes investors need to jump on new exciting investment themes to build wealth over the next 20 years.

Investment expert Terry Smith sits in this camp. He has delivered average annual returns of 17 per cent for investors in his £26.8billion Fundsmith Equity Fund since it launched in late November 2010.

Smith’s approach to investing is meticulous. He will only invest in companies after he has conducted a forensic financial audit. 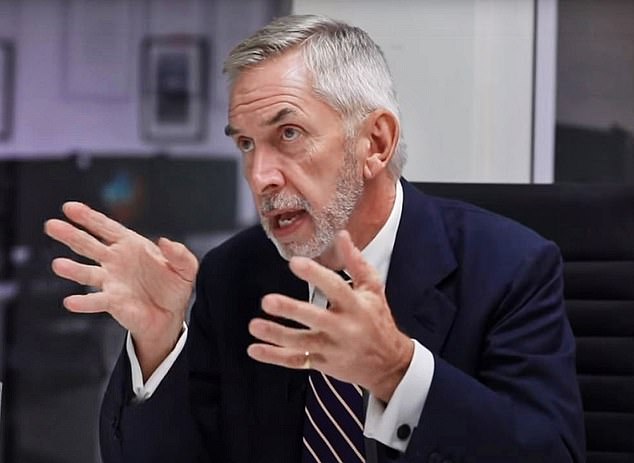 But once he has identified a good investment opportunity – typically a high quality business with a good brand name and strong growth potential – he tends to stick with it. This is why a number of the current 29 holdings have been in the fund for more than ten years – the likes of Diageo, Microsoft, PepsiCo, healthcare company Stryker and lift manufacturer Kone, based in Finland.

Last week, I asked Fundsmith’s public relations adviser whether the companies in Fundsmith Equity could be held for the next 20 years.

The response was swift: ‘The Fundsmith strategy is to invest in good companies and ideally hold them forever.’

It’s a sentiment shared by Freetrade’s Dan Lane. He says: ‘If your main aim is putting money aside to come back to in 20 years, you either spread it thinly over firms that might make it big in the hope that one does and makes up for the failures, or you focus on firms which have shown they already have.’

He adds: ‘Brown-Forman is a classic example. The Jack Daniel’s maker withstood two world wars, the Great Depression, prohibition (during which its product was illegal) and numerous recessions.

‘It might just make it through whatever comes next. That’s the type of character you want from an investment.’