EXPRESS INFORMER > News & Politics > Could skin cancer be treated with the common cold?

Could skin cancer be treated with the common cold? Patients’ tumours shrunk and some even disappeared after being injected with modified virus, research finds

Australian researchers have treated a form of skin cancer with a modified version of the common cold virus.

Australian dermatologist Greg Siller claims he has discovered a way to help patients with basal cell carcinoma (BCC) – the most common form of skin cancer – by using the common cold virus, also known as adenovirus.

The doctor, an adjunct associate professor at the University of Queensland’s Faculty of Medicine, said he achieved an 84 per cent ‘complete cure rate’ of basal cell carcinoma following a recent trial where adenovirus was injected into tumours.

Those with a common cold could be cured of skin cancer, according to an Australian doctor (stock image)

The researchers used an ‘infertile’ version of the virus that was modified to remove some genes so it can’t multiply.

Within weeks of the injections, most patients’ tumours shrunk and some disappeared entirely, Dr Siller said.

The treatment can make patients feel like they have a cold for ‘less than a day’ after being injected, but that the symptoms pass and they are not actually infected, the lead researcher claimed.

‘We are basically giving the cancer a big dose of the common cold,’ Dr Siller, an associate professor of the University of Queensland, told 7NEWS.

‘We are using adenovirus because it is extremely effective in infecting cells. We can deliver it directly into the cancer and it will replicate just once.

‘In that process, it delivers a human gene that codes for the protein that our immune system uses to destroy cancer cells. 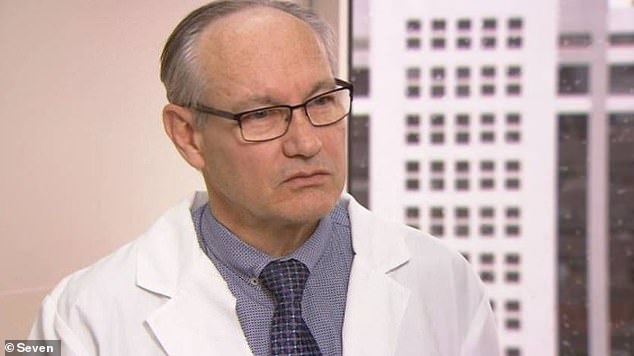 Dr Siller is confident his revolutionary method could spark a significant change in the treatment of all forms of cancer.

‘It appears we have stimulated the patients’ immune system to deal with some of these other BCCs, leading to reduction in size — and some were even cured,’ he told the ABC.

He was quick to point out a complete roll-out of the treatment is ‘at least’ four years away.

BCC makes up 70 per cent of non-melanoma skin cancers in Australia.

it is usually caused by sufferers being exposed to UV rays from the sun.

WHAT IS BASAL CELL CARCINOMA?

Non-melanoma means it does not involve skin pigment cells.

BCC makes up more than 80 per cent of all forms of skin cancer in the UK, with over 100,000 new cases being diagnosed every year.

It is mainly caused by overexposure to UV light from the sun or tanning beds.

BCC can occur anywhere on the body but is most common on areas exposed to the sun, such as the face, neck and ears.

The following people are most at risk:

BCC is usually painless. Early symptoms often only include a scab that bleeds occasionally and does not heal.

Some appear as flat, red, scaly marks or have a pearl-like rim. The latter can then erode into a ulcer.

Others are lumpy with shiny nodules crossed by blood vessels.

Most BCCs can be cured, however, treatment is complex if they are left for a long time.

Treatment usually involves removing the cancerous tumour and some of the surrounding skin.