EXPRESS INFORMER > Health & Medicine > Could nicotine gum boost my brain power? (…or am I better off with a strong cuppa?)

Smoking is terrible for us. We know this to be unequivocally true. And vaping —while touted as a ‘safer’ alternative — poses serious health risks of its own.

But users find both habits hard to quit because of nicotine, the highly addictive chemical they deliver. And yet nicotine is growing in popularity as a ‘nootropic’ — a substance that improves cognitive function supposedly without harmful effects.

On his popular podcast, The Huberman Lab, Andrew Huberman, a prominent neuroscientist and an associate professor in the department of neurobiology at Stanford University, in California, discusses ‘science-based tools for everyday life’.

He recently spoke about his own occasional use of small amounts of nicotine for its cognitive benefits.

When it enters the body, nicotine can cause a temporary feeling of wellbeing through a surge of endorphins. It may also improve concentration and memory.

And, once you look into it, you discover that surprising numbers of people — from medical students to CEOs — are tactically altering their brain chemistry with nicotine by taking small doses in lozenge, gum, spray or patch form (the kind of products commonly used to quit smoking), to improve their cognitive performance.

Smoking is terrible for us. We know this to be unequivocally true. And vaping —while touted as a ‘safer’ alternative — poses serious health risks of its own. But users find both habits hard to quit because of nicotine, the highly addictive chemical they deliver

These advocates know how dangerous smoking can be, but they want to harness the effects of nicotine, a potent drug, widely available from supermarkets and High Street chemists.

Smoking is harmful to us because of the toxins it produces such as carbon monoxide and tar. In contrast, nicotine is not as overtly harmful in small amounts — the most significant risk it poses is making smoking so addictive in the first place.

Nonetheless, nicotine does carry risks: raising blood pressure and heart rate, narrowing arteries and hardening their walls, potentially increasing the likelihood of a heart attack or stroke with regular use.

Yet Dr James Gill, a GP and a lecturer at Warwick Medical School, who has seen an increase in awareness of nootropics among students, says, ‘people are increasingly finding ways of hacking their bodies with nootropics, an example being the widely available and legal nicotine’.

He says: ‘We have nicotinic receptors throughout our brains and bodies. Ingesting nicotine stimulates these receptors to produce acetylcholine, one of the most important chemical messengers in our nervous system, as well as dopamine, another chemical messenger, and the hormone adrenaline — with wide-ranging effects that may improve mood, motivation and focus.’

The nicotine starts having an effect after two to 15 minutes and lasts for around 45 minutes. The drug has a half-life (meaning the time it takes for the active substance to reduce in your body by half) of about two hours.

Dr Gill adds: ‘Nicotine also appears to activate receptors in the hippocampus, the region in the brain that converts our short-term thoughts into long-term memories. So when we take nicotine, it may also help memory stimulation.’

The truth is that humans have been using nicotine for thousands of years. The drug occurs naturally in several plant varieties — including nightshades such as tomatoes, peppers, aubergines and potatoes. 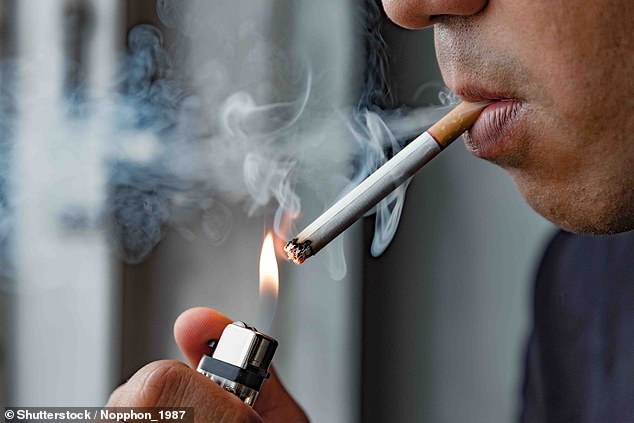 Smoking is harmful to us because of the toxins it produces such as carbon monoxide and tar. In contrast, nicotine is not as overtly harmful in small amounts — the most significant risk it poses is making smoking so addictive in the first place

But it’s found at its highest levels in the tobacco plant (named after Nicotiana tabacum, a plant in turn named after Jean Nicot, a French ambassador who sent tobacco from Brazil to Paris in 1560, promoting its medicinal use for health problems including headaches). Andrew Huberman devoted a recent episode of his podcast to nicotine, talking about an unidentified Nobel prize winner he met who regularly chewed nicotine gum because of growing research suggesting nicotine might prevent age-related cognitive impairment.

When it comes to its putative benefits for focus, Dr Rachel Taylor, a neuropsychologist at Manchester University, says: ‘Neurotransmitters are vital for our focus and state of mind. It is interesting to note that people with schizophrenia, adult ADHD and severe depression often smoke more heavily than the population without these disorders.

‘All these conditions involve an inability to focus on certain stimuli while avoiding others, and it may be that they are effectively self-medicating with nicotine.’

She adds: ‘It also aids bowel movement. However, it is toxic in high doses and can be lethal.’ Taken to excess, nicotine can be poisonous. While extreme toxicity has been relatively rare, it’s become more prevalent in recent years thanks to the slew of new nicotine products such as e-cigarettes and liquid nicotine. Symptoms of nicotine poisoning include nausea, dizziness, abnormal heart rate and increased blood pressure.

And, as Dr Gill explains, even a little too much might undermine any cognitive benefits. ‘Nicotine shows an “inverted J-dose response”, meaning that while a low dose and brief exposure might give a benefit, higher, longer doses might actually impair cognitive function,’ he says.

Then, of course, there’s the unavoidable issue of how highly addictive nicotine is. Dr Gill says: ‘It’s addictive because it boosts dopamine, which feels good — and particularly if you use a delivery method such as cigarettes which hit the brain with the drug almost immediately.’

Secrets of an A-List body: How to get the enviable physiques of the stars 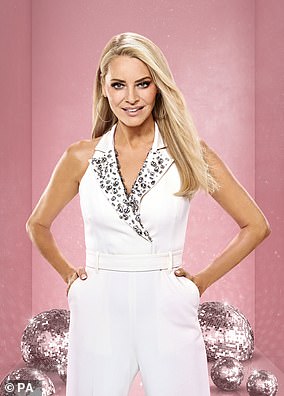 The 53-year-old mother keeps fit with swimming, trampolining and yoga — ‘I don’t like sweating much’ — and often starts her day with five minutes of skipping.

What to try: This walk-out tones the core, strengthens the shoulders and stretches the legs and lower back.

Start standing with your feet slightly apart, reach down into a forward fold and plant your hands in front of your feet. Shift your weight into your hands and walk them out in front until your back, buttocks and heels are in line in a plank, with your palms and toes supporting you.

Take a few breaths, then walk your hands back to the starting position.

That brain boost reduces with regular use, he says. ‘Your body has a thermostat for everything. If you get a lot of exposure to a substance, the benefits get decreased, as your brain learns to compensate, and you want and need more to achieve the same effect.’

As a lifelong non-smoker, who relies on nothing stronger than regular mugs of PG Tips to power days of writing at my kitchen table, I have to confess to some curiosity about the touted nootropic benefits of nicotine. I decide to do my own cautious investigation and consult David Tomen, a self-styled ‘nootropics expert’ and author of Secrets of the Optimised Brain, about how to proceed.

He warns me that the key is to keep the dose low. ‘And only use it occasionally. Too much nicotine desensitises the receptors, so tolerance is an issue. But your receptors recover fairly quickly if you give them a break for a day.’

I decide to experiment with low doses, spaced apart, to see if nicotine does anything for my productivity.

Chewing gum: I start by trying a piece of Nicorette gum, which contains 2mg nicotine (a smoker typically gets between 1 mg and 2 mg of nicotine from each cigarette). I chew enthusiastically before sitting down to work and am surprised to find myself, just ten minutes later, nauseous and trembling. It’s deeply unpleasant and not conducive to concentrating. I end up gagging over the sink.

When I ask Dr Gill where I went wrong, he says: ‘You got the jitters, just like you would if you never drank any caffeine and decided to have a double espresso. Even a 2mg dose is enough to make you feel like this if you aren’t used to it.’ This reaction is called being ‘nic sick’. It makes me shudder to think of the increasing numbers of children vaping and exposing themselves to large doses of nicotine.

Lozenges: A few days later, I slowly suck a 1mg nicotine lozenge — David Tomen says these are ‘safest effective delivery for using nicotine as a nootropic’, with ‘far fewer toxic ingredients than other delivery methods’. This time, there’s no shakiness or nausea, instead I experience a noticeable lift, as if I’ve been on a run or drunk a strong coffee: I can feel the adrenaline. This alarms me. I can see how addictive it might be.

Spray: Nicotine spray is quicker and more pleasant to use than gum or lozenges and provides the same noticeable lift as the lozenge. I also find I’m less hungry at lunchtime — reduced appetite is another nicotine side-effect. When I ask about the risk of addiction, Dr Gill says ‘daily use might well form a dependency — and probably in weeks rather than months’.

Patches: I conclude my foray into nicotine with Nicorette patches. Here the release of nicotine into the bloodstream is slower. The lowest dose is a 7mg patch, which is the amount it is supposed to release over 24 hours. I don’t experience any jitters, however, and I possibly feel more focused and productive. But as Dr Gill says: ‘If you think something will help you focus better, it probably will.’

After all this, there is no doubt nicotine does deliver a cognitive boost if you get past a novice’s side-effects, and I can see how tempting this might be for students or academics. But I’m scared of developing any form of reliance — and sceptical of the burgeoning nootropics industry that suggests we look beyond healthy behaviours, such as exercise and good nutrition, to ‘optimise’ our existence.