EXPRESS INFORMER > Business & Finances > Could care app Birdie be the solution to our social care crisis?

It may not have been discussed much during the Conservative leadership election so far, but there is a crisis raging through the NHS when it comes to social care.

The care system was already at a critical point but the pandemic has brought it to its knees.

The announcement of a Health and Social Care levy earlier this year shows the Government is starting to take it seriously but there is still a major mountain to climb.

Max Parmentier thinks he has the answer with his app Birdie.

Launched in 2017, the company – which recently gained B Corp certification – looks to bridge the gap between care providers and patients.

We speak to him about the issues with the social care system and how Birdie could be an integral part of fixing it.

‘There is a looming crisis’

A recent report by the British Medical Association found Britain faces a ‘ticking time bomb’ in social care as a result of chronic underfunding, severe staffing shortages and an aging population.

The issues long pre-date the pandemic and even the 2017 election when the then Prime Minister Theresa May received backlash for the so-called dementia tax.

Parmentier says: ‘The vast majority of healthcare costs are spent on the elderly and we have a growing cohort of dependents of frail, elderly people dying later…

‘We basically have this looming crisis of healthcare costs, which will soar because we have more and more people in need.’

Globally, the population aged 65 and over is growing faster than all other age groups, according to the United Nations.

In the UK, there are almost 11million people aged 65 and over, equivalent to 19 per cent of the total population.

We basically have this looming crisis of healthcare costs, which will soar because we have more and more people in need.

The problem is that our creaking healthcare systems are ill-equipped to deal with the problems that come with an aging population.

‘Our healthcare system has been built based on the premise of you and I being sick and going to the doctor to the hospital because we had a one off disease. This is what we call episodic care. The doctor gives you medication and you’re cured after two weeks…

‘That’s how we basically shaped our healthcare system. You’re sick, you go to the doctor, you’re given medication, you’re better.

‘But today, all these older adults that die because of chronic diseases and long-term conditions and so on… these are things that you cannot cure, but you can live better with.

‘So waiting too late to be rushed to hospital and then being prescribed 10 medications or sent to a care home in the hope that you’re going to get better… is basically the wrong approach.’

The main issue is that social care is funded in a completely different way to the NHS, with spending set by each local authority.

It has inevitably led to a lack of funding which in turn has led to staffing shortages and a recruitment crisis. 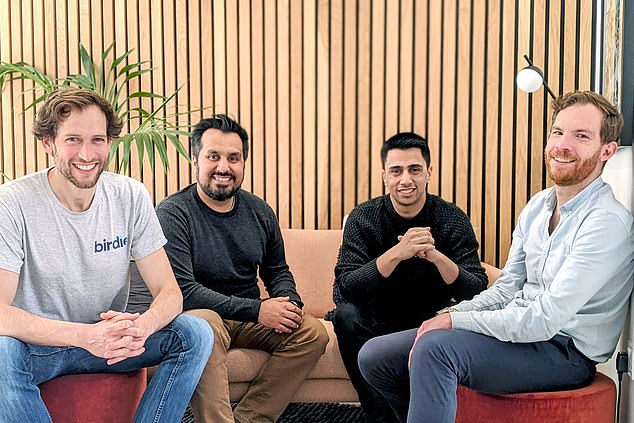 It took a personal experience for Max to focus his attention on just how bad the situation had become.

‘My grandfather had Parkinsons, my grandmother passed away suddenly, we didn’t see it coming at all and so he was alone and we were very… I’d say really confused and a bit disarmed to actually see what the options were for him.

‘After a lot of conversations, we decided that actually a care home would be the best place for him to actually be because he needed care… that was the wrong decision.

‘He was unhappy there and felt completely destabilised… he declined and deteriorated quickly and passed away six months later, I think that was the trigger for me to really question the way we look after our elders.’

It is a familiar scenario in which family members are pushed into putting relatives into care homes.

For Parmentier, who spent three years at consultancy McKinsey before working in health, he took matters into his own hands by launching Birdie.

Unlike other start-ups in the care sector, Birdie isn’t a care provider itself.

Instead it looks to help care providers with a suite of tools which it hopes will reduce time and money on administrative tasks and more time on providing care.

Birdie was founded in 2017 and helps care workers plan visits, monitor and store key information for those receiving care at home.

At the heart of Birdie’s offering is its care management tools which include help for managing a care team and medication information as well as HR capabilities including finance and auditing.

‘Instead of doing it all ourselves, we looked at the home healthcare market – its basically thousands of small home care agencies delivering care in the homes of older adults.

‘These guys are extraordinarily committed but they sometimes don’t work in the most efficient way.

‘They’re using pen and paper, they’re not coordinating and there’s a lot of commute time and a lot of information gets lost.

‘That’s where we said well Birdie can be an extraordinary tool to empower these guys to do a much better job. So we have designed the software that really empowers these care businesses to be able to deliver care in a much more personalised way.’

The central thesis is joining up care with the end goal of providing more of a preventative rather than reactive system.

Birdie claims that 73 per cent of its partners save between seven and 15 hours a week on day-to-day operations.

‘It really frees up their time to really care and just do admin. Focusing on efficiency and more facetime with clients. But also using a lot of the data to really build this much more personalised experience and ensure they are cared for better.’

The sector was clearly crying out for this type of innovation as Birdie now works with 700 care agencies every month with 30,000 patients supported everyday.

But adoption of these kind of tools and a more holistic approach hasn’t come without its challenges.

Parmentier said it took time to convince agencies of the benefits of embracing technology, onboarding care workers on the app and reporting there instead of with pen and paper.

‘Now, we’ve passed that and we really see that adoption is growing much faster. But the first two years was a bit of a barrier. I think the barriers we’re still facing today is the lack of integration between health care and social care.

‘The issue we’re facing is that in the end, it should be a single experience. It doesn’t matter if it’s a care worker or GP. In the end, the patient deserves the best care at the right time at the right place.

Investors haven’t tended to flock to elderly care start-ups but the tide seems to be changing.

Certainly more attention is being paid to the healthcare sector following the pandemic but an aging population and the glaring problems within health systems globally has focused minds.

The chronic staff shortages in the UK system in particular will undoubtedly be driving investor interest in platforms like Birdie’s which promises to drive efficiencies for patients.

Telemedicine and hardware like panic buttons have tended to be the most which Birdie has already started to incorporate.

Birdie has already integrated a range of sensors from different providers to its platform. It can then be installed with the data flowing directly into the platform and care providers can take action if necessary.

‘We’re not a hardware manufacturer at all, but we just want to make sure that we are this platform where other services can come in, and that they’re properly integrated and coordinated and that the data is properly serviced. So that really best case delivered by the best person at the best time.’

‘We’re not limiting ourselves only to care workers. We take much more of a patient’s perspective saying “What does the patient need to have the best care experience?”‘