EXPRESS INFORMER > News & Politics > Could Boris Johnson shift the coronavirus curfew to 11pm? PM comes under pressure to revisit it

Could Boris Johnson shift the coronavirus curfew to 11pm? Prime Minister comes under pressure to water down restriction on pubs and restaurants as Labour MPs prepare to side with Tory rebels who oppose it

By Daniel Martin And Claire Duffin For The Daily Mail

Ministers are under intense pressure to water down the 10pm curfew on pubs and restaurants after Sir Keir Starmer hinted Labour could side with Tory rebels who oppose it.

The Labour leader confronted Boris Johnson over the issue in Prime Minister’s Questions yesterday, demanding that the Government publish the evidence behind its controversial measure.

Amid a growing Tory backbench revolt – and talk of an 11pm compromise – Sir Keir indicated Labour might vote against the plans in the Commons on Wednesday.

Many Conservative MPs believe the curfew will be to the final nail in the coffin of the struggling hospitality industry.

Pressure is being mounted on ministers to do a u-turn on the 10pm curfew on pubs and restaurants after Sir Keir Starmer hinted Labour could side with Tory rebels who oppose it.

Some scientists have also criticised the 10pm policy because it has led to drinkers all leaving the pub at the same time and crowding on to public transport – increasing the risk of spreading Covid-19.

Pictures from Nottingham on Tuesday appeared to bear this out, with students spilling on to the streets as pubs closed, hugging and posing for selfies.

Last night, reports suggested that ministers were considering shifting the curfew to 11pm in bid to appease the rebels.

That was denied by Downing Street but No 10 admitted it could not put forward a scientific case justifying the 10pm cut-off.

Rebels still hope ministers will agree a compromise to avoid the threat of a damaging defeat.

Chancellor Rishi Sunak admitted this week he is ‘frustrated’ by the curfew at a time when he wants to get the economy moving again.

Yesterday at PMQs, Mr Johnson was pressed by Sir Keir over the curfew on pubs, bars and restaurants.

‘The Prime Minister knows that there are deeply held views across the country in different ways on this,’ he said.

‘One question is now screaming out: is there a scientific basis for the 10pm rule?’ 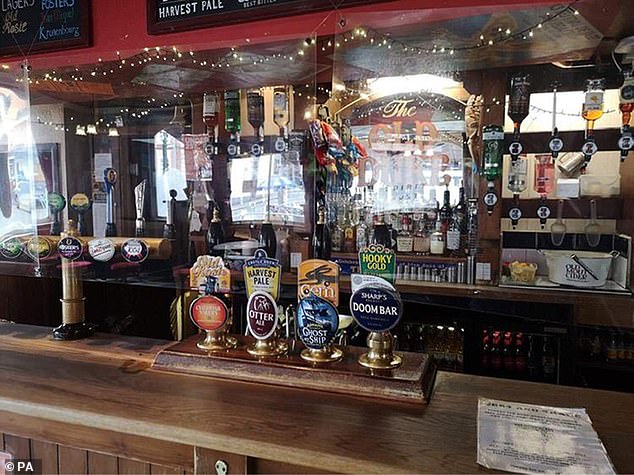 Sir Keir later declined to say whether Labour would vote with or against the Government on the 10pm curfew.

‘The challenge I’ve put down to the Prime Minister is to publish the scientific advice, if he’s got it then the Government should do itself a favour and publish it, if he hasn’t he should review the position,’ he said.

The Prime Minister’s official spokesman said: ‘The curfew was brought forward as part of a package of measures – which should be viewed as just that.’

Greene King is shutting 79 pubs with the loss of 800 jobs after being hit by tighter restrictions because of the pandemic.

The brewer, which has 3,100 pubs, restaurants and hotels across the UK, said around a third of these closures expected to be permanent.