For all the talk of a second wave of Covid-19, it was not the risk of killer germs which had infuriated the locals hereabouts yesterday. It was all the rubbish.

As yesterday’s Mail revealed in graphic detail, Bournemouth beach had resembled a human ant heap this week on the hottest afternoon of the year when half a million people ignored the health risks and descended on this stretch of Dorset coach.

However, it was what they left behind which has really riled the residents.

‘I couldn’t believe that people could be so selfish. Bottles, barbecues, rubbish everywhere – and people felt entitled just to get up and walk away from it,’ said Bournemouth care worker, Paul, 38, venturing nervously back down to the water’s edge with his nine-year-old twins.

Come yesterday morning, things were pretty much back to normal here on the Costa Corona. Walking along the sands which had vanished from view on Thursday, I found plenty of open space with groups scattered six yards apart (as opposed to six inches).

I met the Gurung family, from Farnborough, all enjoying a game of bingo and all mightily relieved that their long-planned trip to the seaside had been earmarked for yesterday and not the day before.

Though the temperature had dropped somewhat, this was still a nice day to be at the beach by English summer standards. And after the insanity of Thursday, people seemed to have heeded the message.

But how did things get so out of control on Thursday? Several seaside resorts around the country reported incidents but Bournemouth was way out in front with three stabbings, numerous fights, umpteen complaints of human waste and such a breakdown in public order that the local council declared a ‘major incident’ (the sort of panic measure usually reserved for a plane crash or terror attack).

Council cleaners had managed to gather up 50 tons of filth off the beach by first light yesterday but I met a team of volunteer litter-pickers who were still busy all through the morning and into the afternoon.

‘I can’t believe how much broken glass we’re finding,’ said Holly, 21, a Bournemouth University student. The most popular items, she added, were little canisters of nitrous oxide otherwise known as laughing gas. She’d found 50 in under an hour. 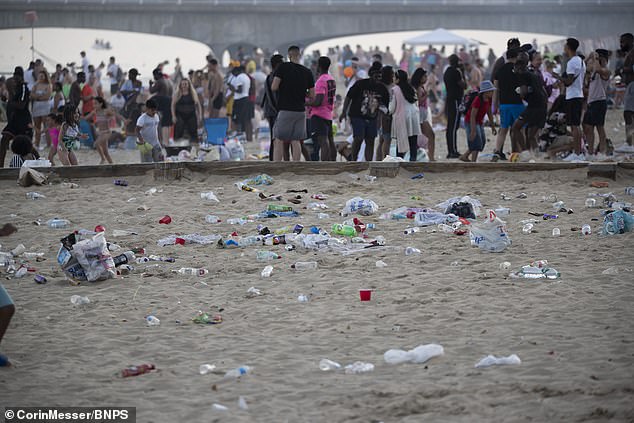 This certainly reinforced an observation made by many people to whom I spoke yesterday. Thursday’s invasion was not primarily caused by family groups with buckets and spades (though there were, of course, plenty of those).

The majority were large gangs of young people – teenagers and twenty-somethings. Thursday’s scenes were not just illustrative of a growing nonchalance towards the risk of infection.

They will be seized on by many as proof, if it were needed, that it is high time all schools are reopened and that most workers are unfurloughed.

Most of those cramming the beach on Thursday, we are told, were not locals. All three stab victims, for example, were from London.

Were it not for the coronavirus, many of these people would doubtless have been on their way to the Glastonbury Festival, 60 miles to the west (but for Covid, it would now be in full swing with Sir Paul McCartney top of tonight’s bill).

So they had decided to party on the beach instead.

Down at the seafront, I bumped into the local Tory MP, Tobias Ellwood, on his bike. How had things become quite so lawless in genteel Bournemouth?

There behind us stood Bournemouth International Centre where Margaret Thatcher delivered her last Tory party conference speech. It’s not exactly the Bronx.

‘It was the perfect storm in a way. You had great weather, people heading for the coast in vast numbers from all over the country and nothing opening up until July 4 so they had nowhere to go except the beach,’ said the ex-minister who now chairs the Defence Select Committee.

He was ready to question the wisdom of some of his ex-colleagues in Government. 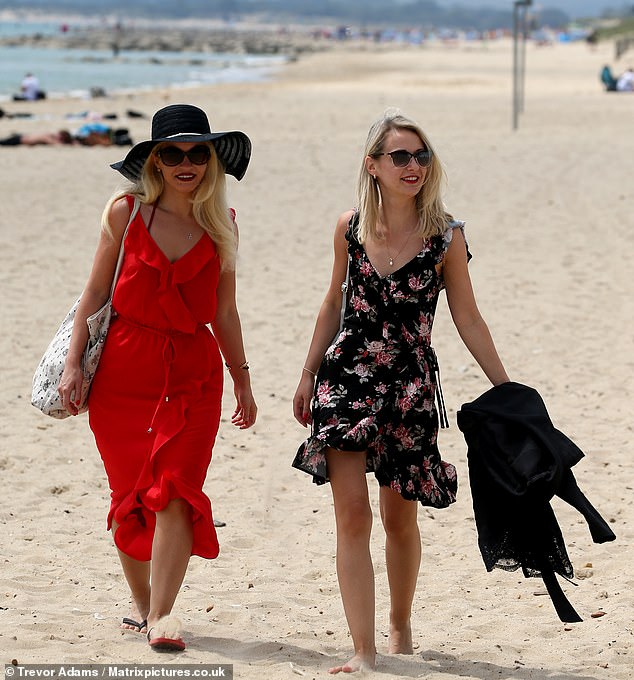 ‘Here in Dorset we have a tiny constabulary. Half a million day trippers was too much. I’m saddened that the Government have stopped the daily coronavirus press briefings. Communication is so crucial in an emergency and we have to get the messaging clearer.’

He was keen to stress that Dorset will be more than happy to accept all comers from July 4, when the Government reopens the pubs and hotels in England.

One set of businesses which have already reopened are the beachfront gift shops and cafés. Shop manager Paula Bese expressed her surprise at the numbers pouring through her shop on a midweek day outside the regular holiday season.

‘I was amazed so many people could get the day off,’ she laughed. It was view shared by local resident Rich Holdsworth, 43.

‘We’ve got to get everyone back to work but, right now, I think too many people are thinking: “I am still being paid and I am loving this”,’ said the video games producer who is himself being furloughed.

‘I bike along this bit of coast every day for exercise but what we saw this week was extraordinary. You might get a day like that ten times in a normal summer season but not midweek in June.

‘And there were so many people with no regard for anyone or anything – whether it was the rules on parking or dogs or barbecues or litter or toilets.’

Still, the residents of Bournemouth can enjoy some small solace. In the midst of Thursday’s mayhem, local traffic wardens had a field day – 998 parking tickets on one stretch of seafront alone.