It Came Upon a Midnight Tier! Outdoor carol singing and nativity plays CAN go ahead in time for Christmas after lockdown ends, CofE confirms

Outdoor carol singing and nativity plays can go ahead in time for Christmas after lockdown ends, the Church of England has confirmed.

Conservative MP Andrew Selous, who speaks on behalf of the church in the House of Commons, claimed the green light has been given to carol singers as long as social distancing is maintained and concerts are held outside.

Speaking during church commissioners’ questions, Mr Selous told the Commons places of worship could open from December 2. It means, he said, ‘churches and cathedrals can now approach Advent and Christmas with certainty’.

‘Clergy have already demonstrated that they’ve made their buildings Covid-secure and many cathedrals and churches are planning to have multiple services to accommodate more people as less are allowed in each service,’ he added.

Conservative MP Andrew Selous, who speaks on behalf of the church in the House of Commons, claimed the green light has been given to carol singers as long as social distancing is maintained and concerts are held outside. Pictured, children perform a nativity today 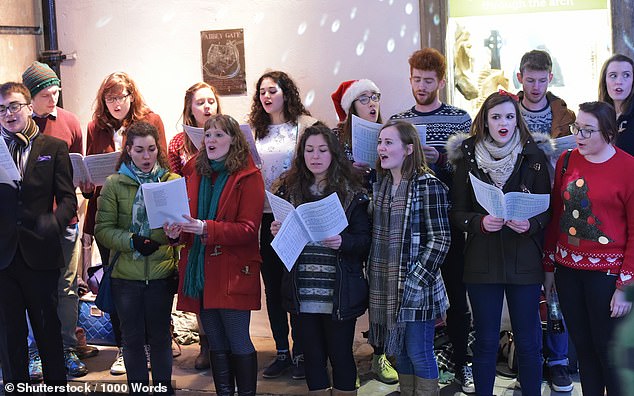 Choir sings carols at the Christmas Market in the streets by Bath Abbey on Dec 9, 2015

And in greater news everyone will be allowed to take part in ‘outdoor and door-to-door singing’.

He said: ‘The further good news is that while indoor singing is limited to performers only, we can all take part in outdoor and door-to-door singing, staying two metres apart or away from the threshold, and nativity plays for under-18s are permitted in accordance with the performing arts guidance.’

It comes as Number 10 today published a breakdown of England’s lockdown tiers in a desperate attempt to justify the brutal curbs to the public as Boris Johnson announced all but three places of the country will be plunged into the toughest brackets. 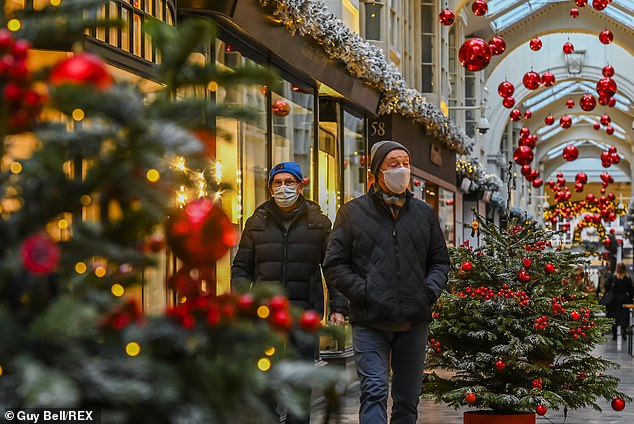 What are the UK-wide rules for Christmas?

But officials insisted it was ’not possible to set rigid thresholds’ for the five indicators used to judge which areas need tougher measures, meaning local officials will be left in the dark about how to escape the curbs unless they are told exactly what is needed in behind-closed-doors meetings.

Oxford University’s Carl Heneghan, a professor in evidence-based medicine and epidemiologist, told MailOnline without ‘clear, objective criteria’, people are often left confused about why they are being punished and what behaviour they need to adjust to move out of the tougher lockdown brackets.

Only Cornwall, Scilly and the Isle of Wight have been put into the loosest Tier 1, which allows socialising inside homes and pubs subject to the Rule of Six.

As a result most of England — around 55million residents — will be banned from mixing indoors with other households, apart from five days over Christmas. Pubs in Tier 2 will only be able to serve alcohol with ‘substantial’ meals

It was previously revealed three households will be allowed to form ‘Christmas bubbles’ over the festive period after politicians across the UK agreed to ease draconian curbs and give hard-pressed families respite from coronavirus rules.

A four-nation meeting of the Cobra emergency committee agreed plans to allow extended families and friends to meet without social distancing within exclusive groups.

The relaxed measures will be in place from Wednesday December 23 to Sunday December 27, paving the way for families in England, Wales, Scotland and Northern Ireland to meet up.

In England, those already in ‘support bubbles’ with vulnerable or lonely relatives living elsewhere will count as one household under the new rules – extending the size of potential gatherings.

Travel across tiers in England will also be allowed, as will journeys between England, Scotland, Wales and Northern Ireland.

But in a blow for the hospitality industry, the Christmas bubbles will only be allowed to meet up in private homes, places of worship and in outdoor public spaces. 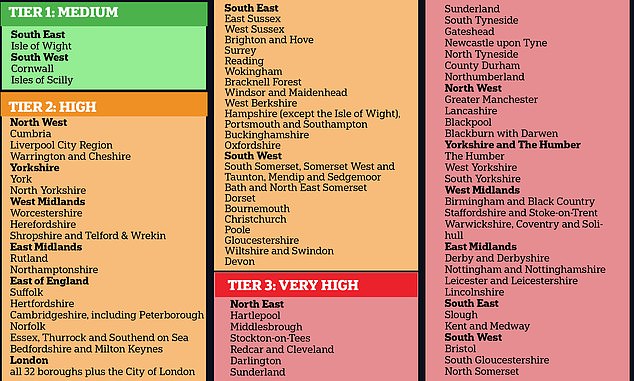