EXPRESS INFORMER > News & Politics > Coronavirus: What’s happening in Canada and around the world on Jan. 11

British Prime Minister Boris Johnson said Monday Britain was in “a race against time” to roll out COVID-19 vaccines as deaths hit record highs and hospitals run out of oxygen. His top medical adviser said the pandemic’s worst weeks were imminent.

Seven large-scale vaccination centres were opening in England on Monday, joining about 1,000 other sites across the country, including hospitals, doctors’ clinics and some drugstores.

The centres include the Excel Centre in London, Ashton Gate in Bristol, the Epsom racecourse in Surrey and the Etihad Tennis Club in Manchester.

The openings come as a new, more transmissible variant of the disease surges through the population — with one in 20 people in parts of London now infected — threatening to overwhelm the health service with hospitals overloaded with patients.

The death toll in the United Kingdom has been soaring and now stands in excess of 81,000 — the world’s fifth-highest toll — while more than three million people have tested positive.

In a bid to get on top of the pandemic and to try to restore some degree of normality by spring, Britain is rushing out its largest ever vaccination program, with shots to be offered to about 15 million people by the middle of next month.

“It’s a race against time, because we can all see the threat that our NHS (National Health Service) faces, the pressure it’s under, the demand in intensive care units, the pressure on ventilated beds, even the shortage of oxygen in some places,” Johnson said on a visit to a vaccination centre in Bristol, in southwest England.

“This is a very perilous moment. The worst thing now for us is to allow success in rolling out a vaccine program to breed any kind of complacency about the state of the pandemic.”

The government’s chief medical adviser Chris Whitty said there are now 30,000 people in hospital, compared to about 18,000 during the peak of the first outbreak in April.

Johnson’s government is pinning its hopes on a mass vaccination program after Britain became the first country to approve vaccines developed by Oxford-AstraZeneca and by Pfizer-BioNTech, and approved Moderna’s shot on Friday.

Its plan, announced Monday, envisages two million shots being delivered at some 2,700 centres a week in England by the end of January, with the aim of immunizing tens of millions of people by spring and offering all adults a vaccine by autumn.

Johnson said two million people had already been given the vaccine — more than any other European country — but admitted that inoculating 15 million people in the four highest risk levels, including those over 70 and frontline health workers, by a Feb. 15 target was “a huge ask.”

“We believe it’s achievable, we’re going throw absolutely everything at it, to get it done,” he said.

The federal government is introducing legislation to close a loophole that allows Canadians who travelled abroad to claim up to $1,000 in sick pay while quarantining back home.

The Canada recovery sickness benefit has been available to those who are unable to work for at least half of their scheduled work week because they tested positive for COVID-19 or are isolating due to the virus.

But critics have warned it could be going to Canadians completing their mandatory 14-day quarantine after returning from personal vacations abroad. 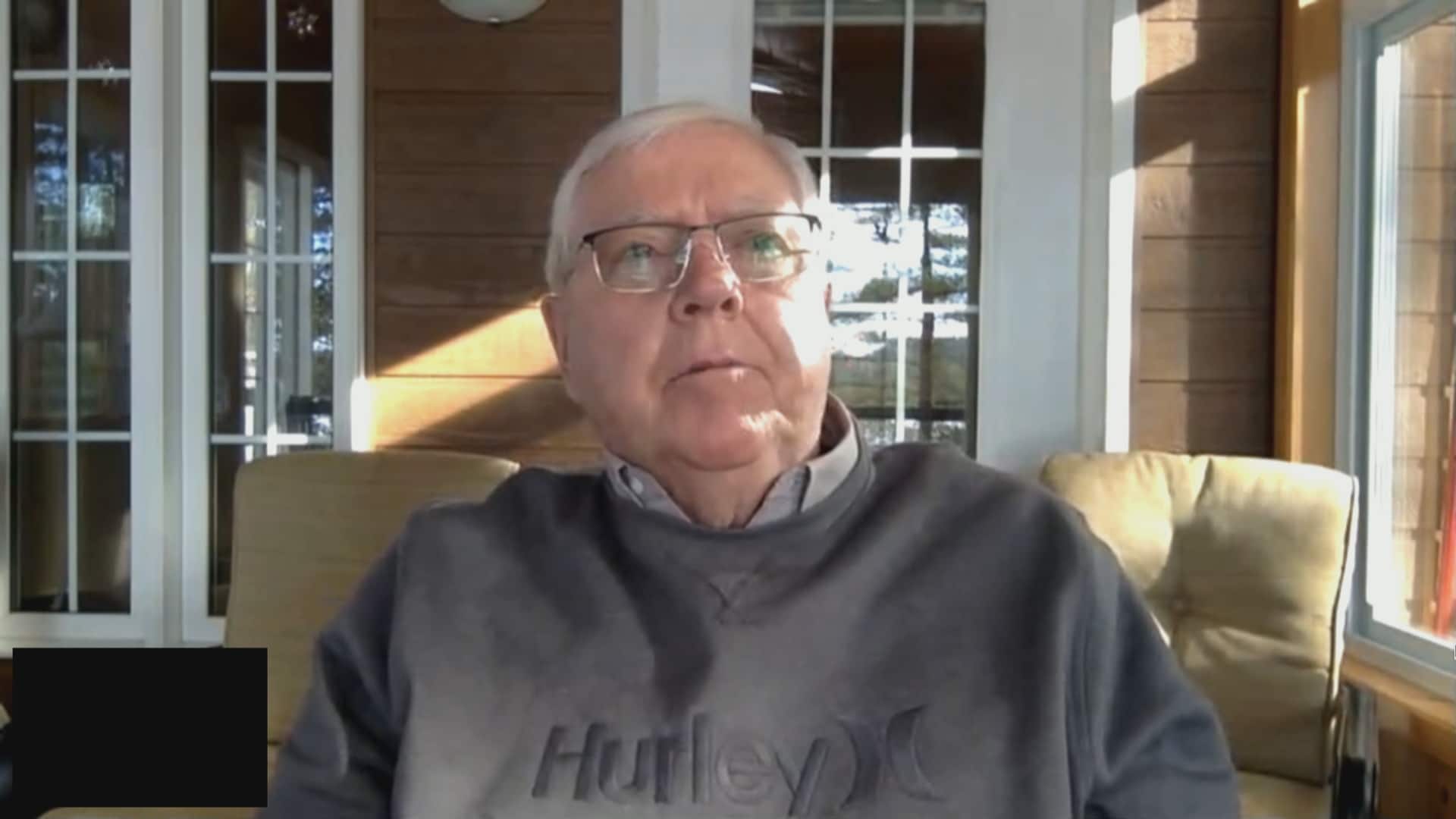 Bob Slack and his wife Lois are living in their winterized cottage near Brockville, Ont., enjoying watching nature out their windows and going for walks. 1:17

In Atlantic Canada, Newfoundland and Labrador reported no new cases on Monday. On Sunday it reported its first new case in five days, which the Department of Health said was related to international travel.

Nova Scotia announced five new COVID-19 cases on Monday, including one at Acadia University in Wolfville and another at Dalhousie University in Halifax.

Thousands of elementary school students headed back to in-person classes in the province on Monday, amid debate over how to best reduce COVID-19 transmission in schools and whether classrooms should even be reopening at all. 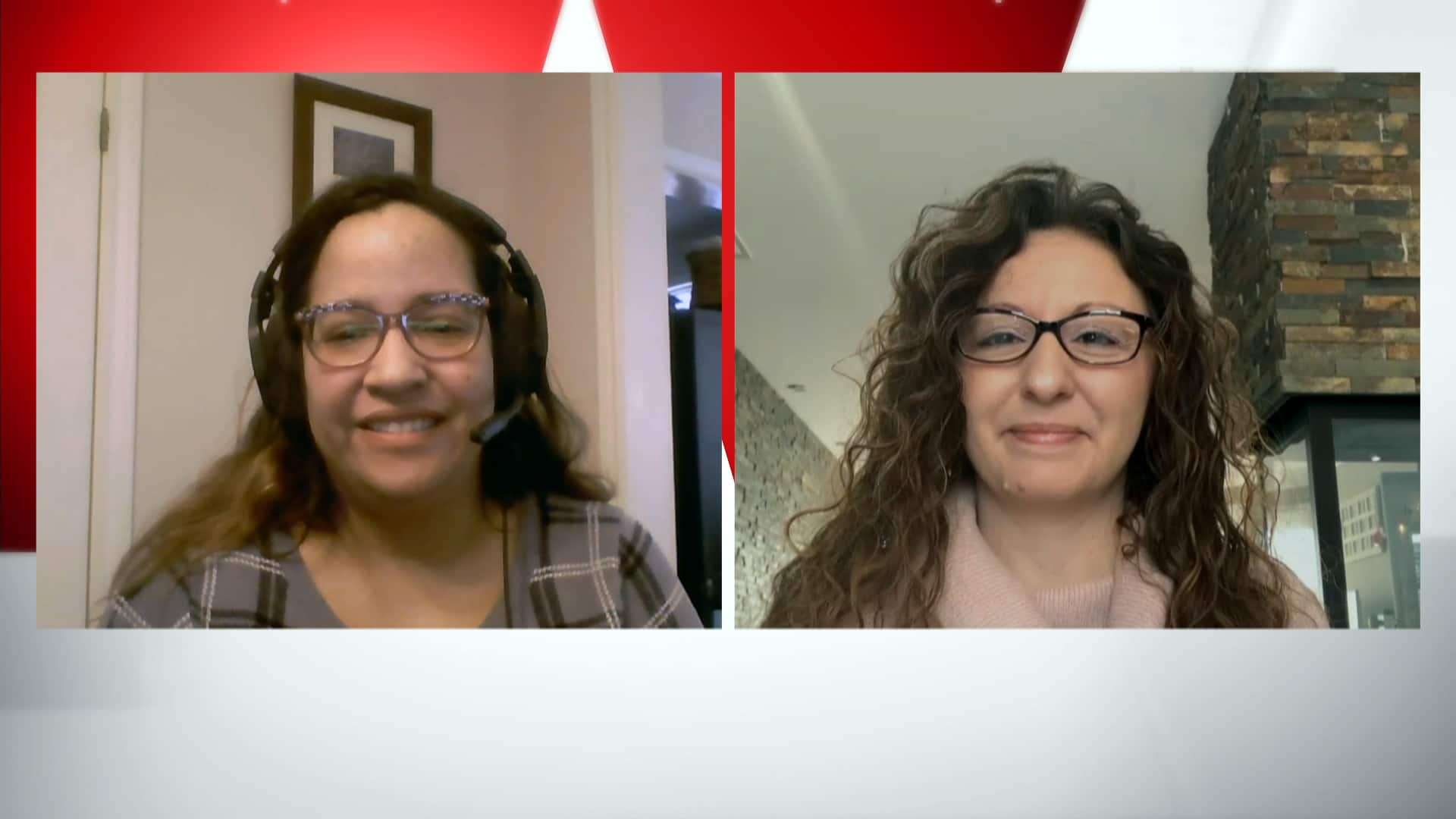 CBC News speaks with parents about their concerns as kids return to school amid alarmingly high COVID-19 numbers. 7:53

The number of patients with COVID-19 in hospitals climbed to 1,563, with 387 of those being treated in intensive care.

HINDSIGHT IS 20/20, BUT 2020 SUCKED <br><br>Let’s discuss…in 11 tweets<br> <br>First &amp; foremost: COVID levels in Ottawa are trending at the highest we’ve seen since this all started. We’re now deeply in the Red level. We are once again in a crisis, &amp; we don’t use that word lightly. (1/11)

Ontario’s cabinet is being urged to declare another state of emergency as it seeks to address surging numbers of COVID-19 cases in the province, sources said. Lockdowns alone won’t be effective enough at curbing the coronavirus unless the government takes steps to address a key driver of infections – workplaces – by helping to make them safer, says Dr. Isaac Bogoch, a member of Ontario’s COVID-19 task force. 6:55

Meanwhile, the CEO of the London Health Sciences Centre has been fired after it was revealed that he had travelled five times during the pandemic to the United States.

Saskatchewan announced 412 new cases and eight more deaths on Monday. Hospitalizations due to COVID-19 are at an all-time high. According to the province, 197 people are in hospital right now, with 31 in intensive care; the previous hospitalization record was 182.

Alberta reported 639 new cases on Monday, along with 23 more deaths. Premier Jason Kenney said the province will immediately expand its COVID-19 vaccination program to include all paramedics and emergency medical responders.

But Kenney said Alberta is running out of COVID-19 vaccinations and could exhaust its supply as early as next week. He said the province needs “a huge surprise shipment.”

By next week, the province is projecting to be short at least 20,000 doses, he said, and that number could be significantly higher based on the pace of inoculations.

In British Columbia, health officials announced 1,475 new cases of COVID-19 in the province over the last three days, along with 22 deaths, which pushed B.C.’s death toll over 1,000.

Earlier, the Vancouver Canucks resumed training camp Monday after a COVID-19 test for a player came back with a “false positive” on Sunday, leading the team to cancel training camp for the day.

The team said in a release Sunday it cancelled practice “out of an abundance of caution due to potential exposure to COVID-19.” A subsequent second test on the player — who has not been identified — came back negative, coach Travis Green said.

After two weeks with no new cases of COVID-19, Nunavut said it will lift lockdowns in the last two communities that were still facing strict public health measures.

But Dr. Michael Patterson, the territory’s chief public health officer, said it will take until the end of January to officially declare over outbreaks in Arviat and Whale Cove.

Public vaccination clinics that received the Moderna vaccine are being held in Igloolik, Gjoa Haven, Arviat and Cambridge Bay this week. The territory started vaccinating its elders last week.

As of Monday afternoon, more than 90.4 million cases of COVID-19 had been reported worldwide, with more than 50.1 million of those considered recovered or resolved, according to Johns Hopkins University’s COVID-19 case tracking tool. The global death toll stood at more than 1.9 million. 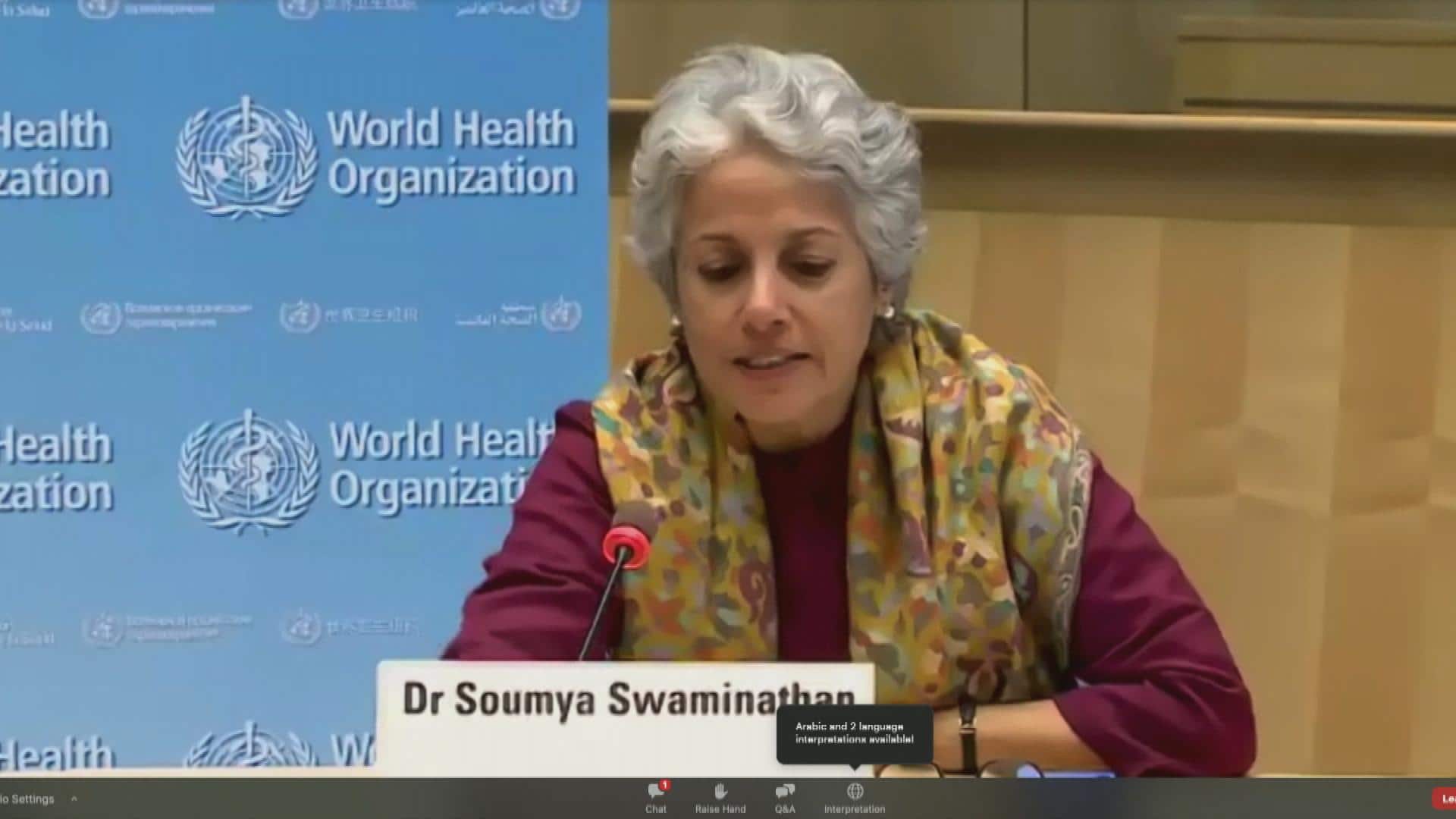 Despite incredible progress on COVID-19 vaccines over the past year, no significant level of herd immunity will be reached in 2021, according to the World Health Organization’s chief scientist, Dr. Soumya Swaminathan. 1:31

In the Americas, U.S. president-elect Joe Biden received his second dose of the coronavirus vaccine, three weeks after getting his first one with television cameras rolling, in an attempt to reassure people in the U.S. that the inoculations are safe.

Biden got his first shot on Dec. 21. The virus has now killed nearly 375,000 people in the United States — about 60,000 more than when the president-elect got his first round of vaccination.

In brief comments to reporters after his shot, Biden said he has confidence in his COVID-19 combating team to hit ambitious vaccination-rate targets after he takes office on Jan. 20. He also called the current rate of thousands of people dying daily “beyond the pale.”

Elsewhere in the U.S., two gorillas at the San Diego Zoo have tested positive for COVID-19 after exhibiting symptoms of the disease, California’s governor said on Monday, in what is believed to be the first known transmission of the virus to apes.

Gov. Gavin Newsom, in his latest coronavirus update for the state, said the source of the gorillas’ infection was still under investigation to determine whether the virus was transmitted between animals or from humans to the apes.

A statement posted on the San Diego Zoo Safari Park website said the gorillas were suspected of having contracted infection “from an asymptomatic staff member,” despite employees following all COVID-19 safety precautions recommended by the U.S. Centers for Disease Control and Prevention.

The virus has also been found in a number of other wild-animal species in captivity, including several lions and tigers at the Bronx Zoo in New York and four lions at the Barcelona Zoo in Spain.

But the gorillas in San Diego are believed to mark the first known case of infections confirmed in apes. The virus also has shown up in a number of household dogs and cats.

Last month, the USDA said it had confirmed the first known case of the coronavirus in an animal in the wild, a mink, following an outbreak among farmed minks that killed 15,000 of the animals.

The spokesperson for Mexican President Andres Manuel Lopez Obrador said Sunday he has tested positive for coronavirus, but there was no word on whether the president had been tested.

In Africa, South Africa is struggling to cope with a spike in COVID-19 cases that has already overwhelmed some hospitals, as people returning from widespread holiday travel along the coast spread the country’s more infectious coronavirus variant.

Of particular concern is Gauteng province, the country’s most populous, which includes the cities of Johannesburg and Pretoria. Authorities say it is already seeing a spike in new infections after people travelled to coastal areas, where the variant is dominant.

In Europe, authorities in northern France launched a week-long mass testing program on Monday to assess the rate of coronavirus infections and the spread of a more contagious variant that first appeared in southern England in November.

France has been criticized for its slow vaccination program, with only 80,000 French citizens having been vaccinated against the coronavirus as of Friday. Neighbouring Germany has conducted hundreds of thousands of inoculations.

But a lack of data and varying efficacy rates reported for the vaccine from different countries could undermine public trust in the rollout, according to public health experts. Interim data from a late-stage human test of CoronaVac showed it is 65.3 per cent effective, Indonesia’s food and drugs authority BPOM said — lower than figures in Brazil and Turkey, which have yet to launch mass vaccinations.

The outbreak focused on the Hebei cities of Shijiazhuang and Xingtai is one of China’s most serious in recent months and comes amid measures to curb the further spread during next month’s Lunar New Year holiday. Authorities have called on citizens not to travel, ordered schools closed a week early and conducted testing on a massive scale.

Schools have reopened partially in Sri Lanka after being closed for nearly three months. The government decided not to reopen schools in the capital Colombo and its suburbs as the majority of recent COVID-19 cases are reported from those areas.