EXPRESS INFORMER > News & Politics > Coronavirus: What’s happening in Canada and around the world on Dec. 1

A medical director for the Edmonton area has already warned that Alberta’s hospital system is under “significant strain” and is adding intensive care beds as it faces an increase in COVID-19 cases.

“We have seen holiday gatherings leading to outbreaks,” she said at her daily briefing Tuesday, suggesting that people plan to get together remotely, or in small, well-distanced groups outdoors.

The Current13:17Justin Trudeau on the cost of fighting the pandemic

After yesterday’s fiscal update, Prime Minister Justin Trudeau joins Matt Galloway to discuss the cost of fighting COVID-19, and how his government plans to roll out the vaccines that could finally subdue the pandemic. 13:17

Ontario reported 1,707 new cases of COVID-19 on Tuesday and seven new deaths due to the virus.

Health Minister Christine Elliott said 727 new cases are in Toronto, 373 in Peel Region, and 168 cases in York Region. The province said it has conducted 34,640 tests since the last daily report.

As of Tuesday, the province was reporting 645 COVID-19 hospitalizations, with 185 in intensive care. (For more detail about the latest numbers around COVID-19 in Ontario, click here.)

Hospitalizations for COVID-19 increased to 719, with 98 in intensive care, according to a provincial dashboard.

Quebec Premier François Legault said his government will decide in 10 days whether the province’s COVID-19 situation will allow for multi-household gatherings at Christmas.

In British Columbia, the province on Tuesday announced 656 new cases and 16 more deaths.

A group of B.C. parents pulled their kids out of school for the day to protest the province’s back-to-school plan, despite the provincial health officer pointing to low rates of COVID-19 transmission in schools.

“We’ve had many exposure events, but they have very rarely resulted in transmission, particularly from children to anyone,” Dr. Bonnie Henry said in advance of the protest Monday.

Saskatchewan Premier Scott Moe said Tuesday there is a chance larger gatherings will be allowed during the holidays.

Until Dec. 17, the number of people allowed in a household is limited to five. But Moe said if those restrictions start to bring down the number of COVID-19 cases in the province, they might be loosened over the holidays.

In Manitoba, health officials reported a record-breaking 16 new deaths Tuesday, as it added 283 new cases to the province’s total. Half of the deaths are related outbreaks, including three from Holy Family personal care home in Winnipeg — two men in their 80s and 90s and a woman over the age of 100.

Manitoba premier Brian Pallister spoke today about how the vaccine would be distributed to Indigenous communities. He said it would help if Ottawa takes care of the who, what and when of vaccinations, while Manitoba could deal with the where and how. 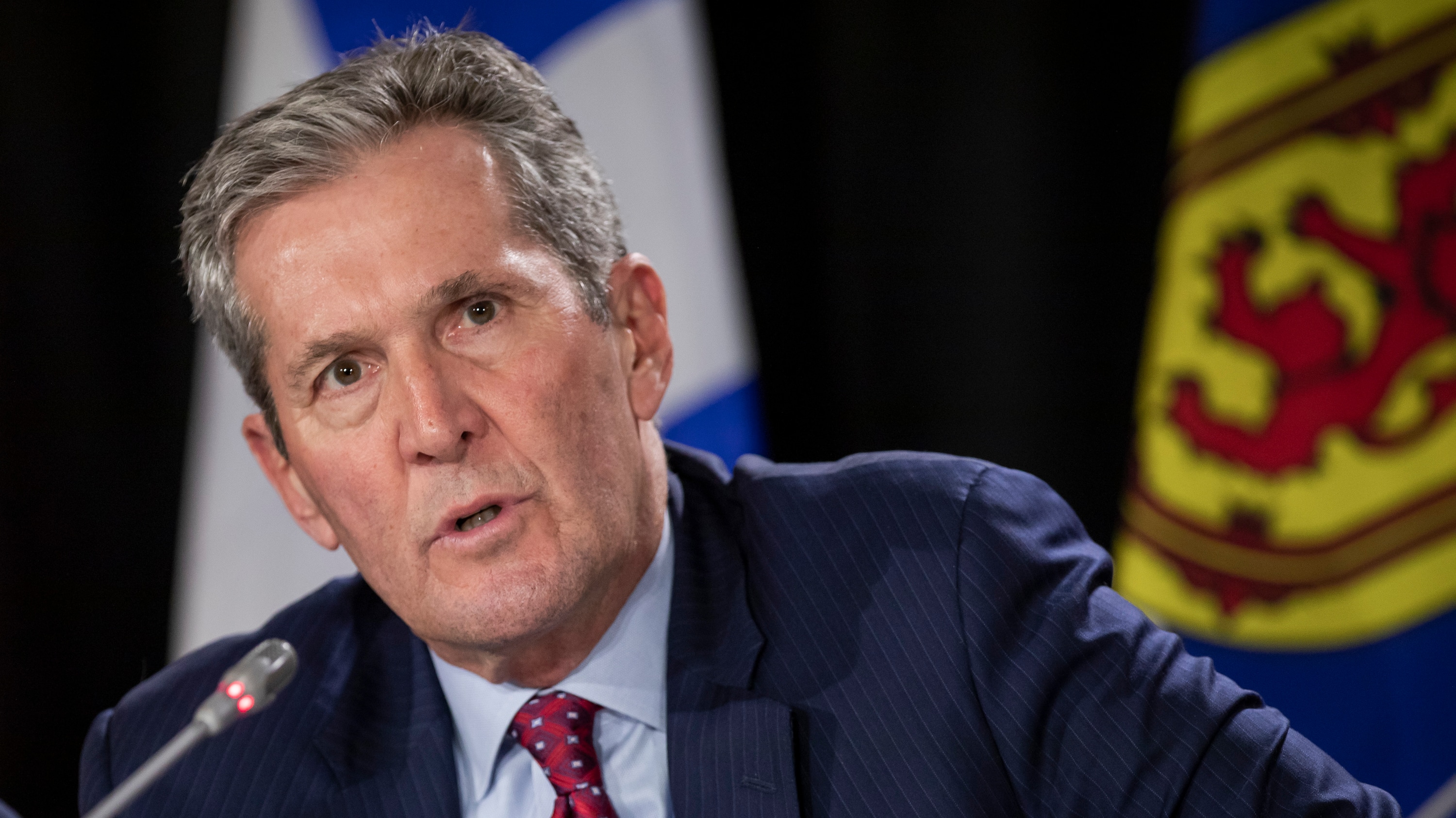 Manitoba Premier Brian Pallister says Ottawa needs to clarify who will administer a COVID-19 vaccine to the province’s Indigenous residents, who live both on and off reserves.   1:27

In Atlantic Canada, Newfoundland and Labrador reported one new case of COVID-19 on Tuesday, while there were no new cases reported in Prince Edward Island.

Across the North, only one new case was reported, in Nunavut. A mask mandate for indoor public spaces went into effect in Yukon on Tuesday.

From The Associated Press and Reuters, last updated at 4:45 p.m. ET

As of Tuesday evening, more than 63.7 million cases of COVID-19 had been reported worldwide, with more than 40.7 million of those cases listed as recovered or resolved in a tracking tool maintained by Johns Hopkins University. The global death toll stood at more than 1.4 million.

In the Americas, the United States entered the final month of the year hoping that promising vaccine candidates will soon be approved to halt the rapidly spreading novel coronavirus after 4.2 million new cases were reported in November.

The new COVID-19 cases were more than double the previous monthly record set in October, as large numbers of Americans still refuse to wear masks and continue to gather in holiday crowds, against the recommendation of experts.

With outgoing President Donald Trump’s coronavirus strategy relying heavily on a vaccine, a Food and Drug Administration (FDA) panel of outside advisers will meet on Dec. 10 to discuss whether to recommend the FDA authorize emergency use of a vaccine developed by Pfizer Inc.

A second candidate from Moderna Inc. could follow a week later, officials have said, raising hopes that Americans could start receiving inoculations before the end of the year, although widespread vaccinations could take months.

On Tuesday, the head of the FDA said after a meeting at the White House that federal officials would take the time needed to “get this right,” despite increasing pressure and growing frustration from Trump that vaccine approval is taking too long.

“No one at FDA is sitting on his or her hands. Everyone is working really hard to look at these applications and get this done,” Stephen Hahn, the head of the Food and Drug Administration, told ABC in an interview on Instagram live. “But we absolutely have to do this the right way.”

Trump has been livid with the FDA for not moving faster, blaming the fact that a vaccine was not developed ahead of the Nov. 3 election in part for his loss.

Meantime, Florida joined Texas and California in surpassing one million confirmed COVID-19 cases Tuesday. Gov. Ron DeSantis has vowed not to adopt any further restrictions or impose closures like those enacted in Florida in the spring and summer.

In Rhode Island, where case numbers have been on the rise, officials have opened two field hospitals with a combined 900 beds to deal with an expected increase of COVID-19 patients.

A health official says Alabama hospitals treating a record number of COVID-19 patients are bracing for a “tidal wave” of additional cases linked to holiday gatherings.

Dr. Jeanne Marrazzo of the University of Alabama at Birmingham says health care systems could be overwhelmed within two or three weeks. The Alabama Hospital Association says only 11 per cent of the state’s intensive care beds were available Monday.

Brazil reported 50,909 additional confirmed cases of the novel coronavirus in the past 24 hours — the highest daily case number since early September — and 697 new deaths from COVID-19, the Health Ministry said on Tuesday.

The Southeast Asian nation is back on high alert after confirming on Monday the country’s first community infection in 89 days, prompting the closure of several places in the densely populated southern city.

The latest cases have been traced back to a flight attendant, who had been kept inside a quarantine facility for five days before being released to self-isolate at home.

“The flight attendant contracted the virus inside the quarantine area then spread it to others during his home-quarantine time,” Health Minister Nguyen Thanh Long said in a government statement.

“It’s the first ever time such a thing happened. The flight attendant seriously violated quarantine regulations.”

With its usually strict quarantine and tracking measures, Vietnam has managed to quickly contain its coronavirus outbreaks, allowing it to resume its economic activities earlier than much of Asia.

Vietnam crushed its first wave of coronavirus infections in April and went nearly 100 days without local transmission until the virus re-emerged in the central tourist city of Danang in July and spread widely before being contained in a few weeks.

Late on Tuesday, Vietnamese Prime Minister Nguyen Xuan Phuc said Vietnam would suspend all inbound commercial flights following the new outbreak. Flights for some foreign experts who do business in Vietnam had been operating throughout the pandemic.

In Europe, nonessential shops in Belgium were reopening Tuesday in the wake of encouraging figures about declining daily coronavirus infection rates and hospital admissions.

The government is fearful, however, that the change might lead to massive gatherings in the nation’s most popular shopping centres and streets. Over the weekend, pre-Christmas light festivals already led to crowded scenes in several cities, prompting warnings from virologists about the dangers of reopening too soon.

Belgium, host to the headquarters of the 27-nation European Union, has been one of the hardest-hit countries in Europe during the pandemic. Belgium has reported more than 16,500 deaths linked to the virus during two surges in the spring and the fall.

Under the new rules, shopping has to be done alone or with a minor or a dependent person. Time in a shop is limited to half an hour. Restaurants and bars remain closed.

In the Middle East, Lebanon’s economy faces an “arduous and prolonged depression,” with real GDP projected to plunge by nearly 20 per cent because its politicians refuse to implement reforms that would speed up the country’s recovery, the World Bank said Tuesday.

It said Lebanon should quickly form a reform-minded government to urgently carry out changes. The crash of the local currency has already led to triple-digit inflation. The dire projections by the World Bank, including a 19.2 per cent drop in gross domestic product this year alone, come as Lebanon suffers its worst economic and financial crisis in its modern history, posing a threat to the country’s stability.

The crisis began a year ago and worsened with the spread of coronavirus and the massive blast at Beirut’s port, which destroyed the facility, killed more than 200 people and caused widespread destruction.

Iran remained the hardest hit country in the region, with more than 975,000 recorded cases of COVID-19 and more than 48,600 deaths.

In Africa, deaths from malaria due to disruptions during the pandemic to services designed to tackle the mosquito-borne disease will far exceed those from COVID-19 in sub-Saharan Africa, the World Health Organization warned. South Africa remained the hardest-hit country in Africa, with more than 790,000 recorded cases of COVID-19 and more than 21,500 deaths.