Coronavirus hospitalizations and infections have hit single-day highs across the United States – but nationwide deaths are still about half of what they at the initial peak in April.

There were 61,964 people being treated for COVID-19 in hospitals nationwide on Tuesday, according to COVID Tracking Project data. That toll surpassed the previous single-day high of 59,780 hospitalizations recorded back in April at the peak of the first coronavirus wave and the peak 59,718 hospitalizations in July.

Infections across the country hit a record high of 136,325 cases on Tuesday. Cases have been surging since early October with the seven-day rolling average for cases now at more than 118,000.

Despite the huge surge in cases and hospitalizations, the number of Americans dying from COVID-19 is not rising at the same rate.

The seven-day rolling average for deaths is currently just under 1,000 per day and is at its highest point since August. Daily deaths on Tuesday were at 1,420.

Yet deaths, which are a lagging indicator and can potentially rise weeks after infections, are still down from the peak 2,000 fatalities recorded per day back in April.

Infections across the country hit a record high of 136,325 cases on Tuesday. Cases have been surging since early October with the seven-day rolling average for cases now at more than 118,000 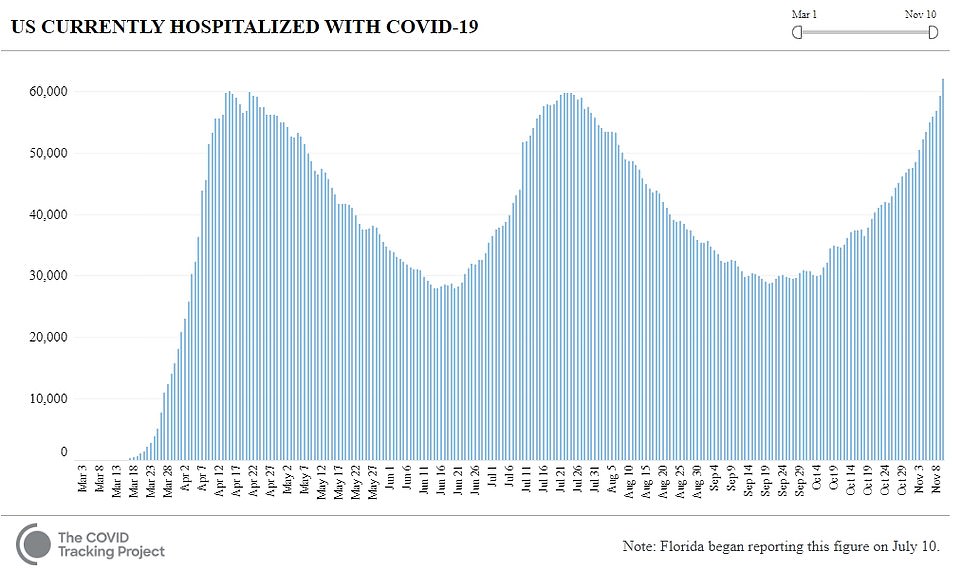 There were 61,964 people being treated for COVID-19 in hospitals nationwide on Tuesday, according to COVID Tracking Project data. That toll surpassed the previous single-day high of 59,780 hospitalizations recorded back in April at the peak of the first coronavirus wave and the peak 59,718 hospitalizations in July

This new wave appears bigger and more widespread than the surges that happened in the spring and summer – and threatens to be worse.

The spike in cases can, at least in part, be attributed to an increase in testing. Hospitalizations are a key metric of the pandemic because, unlike case counts, they do not rise and fall with the number of tests performed.

Health officials have warned that patients could start dying if hospitals become overwhelmed. A forecast from the University of Washington’s Institute for Health Metrics estimates that the death toll could reach nearly 400 million by February. Researchers forecast that 63 million lives could be saved if the majority of Americans wear masks and social distance.

Health Secretary Alex Azar has said that temporary hospitals will be set up to treat people where health systems are close to being overwhelmed, including in the Midwest and California.

Several states posted record numbers of cases on Tuesday, including over 12,600 new cases in Illinois, 10,800 in Texas and 7,000 in Wisconsin. Texas has now become the first state with more than 1 million confirmed COVID-19 cases.

California and several states across the Midwest have now started tightening restrictions on residents. 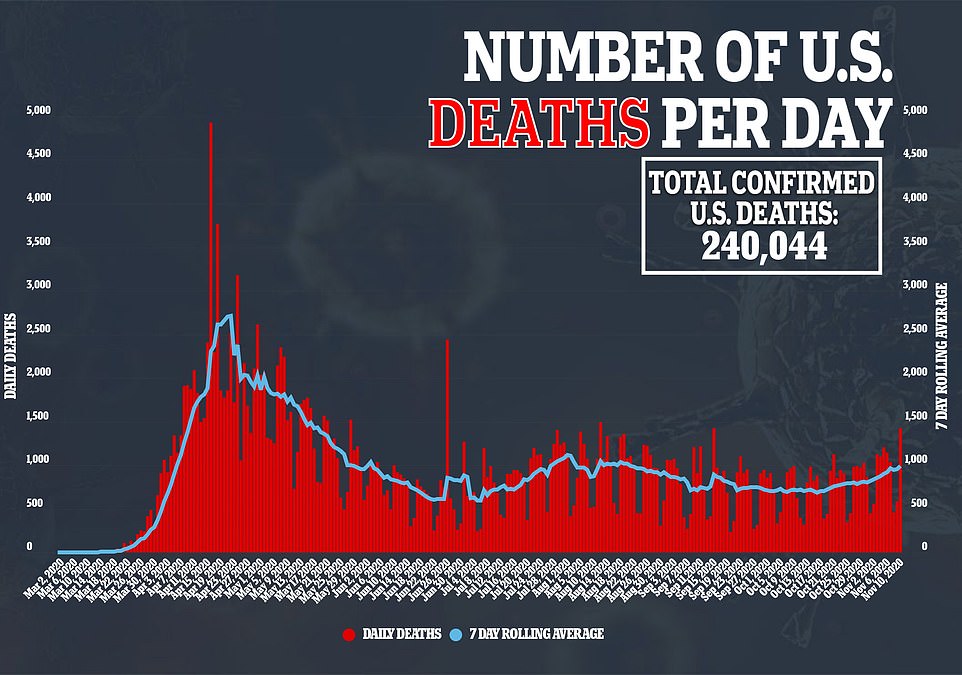 The seven-day rolling average for deaths is currently just under 1,000 per day and is at its highest point since August. Yet deaths, which are a lagging indicator and can potentially rise weeks after infections, are still down from the peak 2,000 fatalities recorded per day back in April 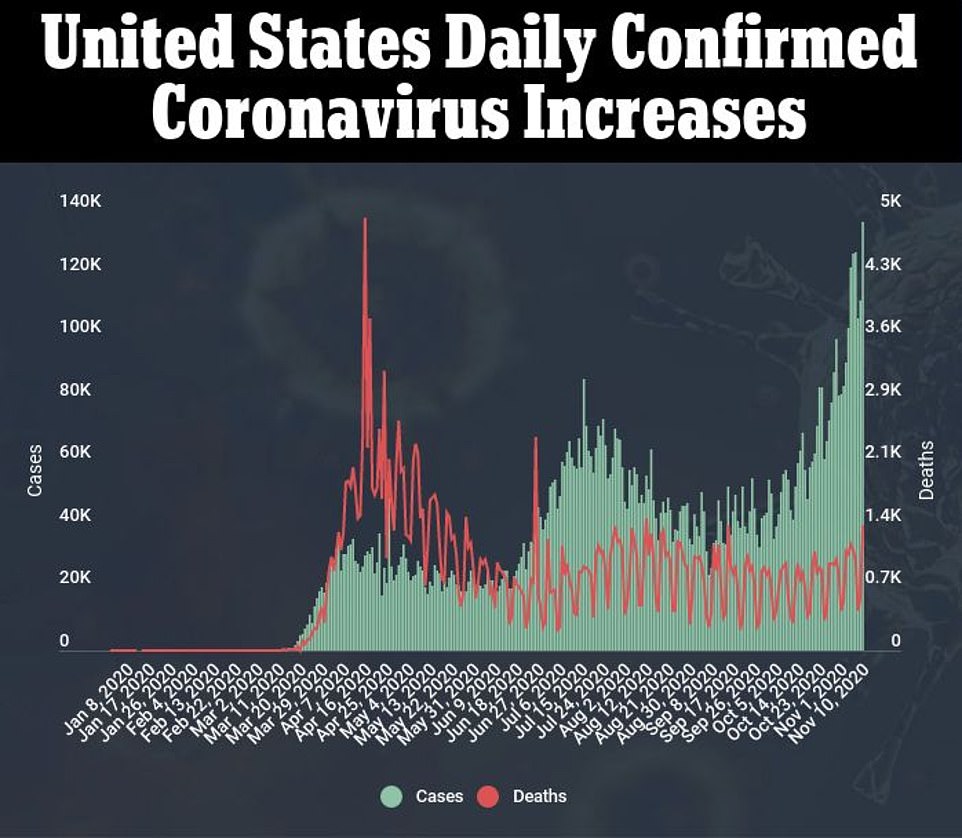 Texas has become the first U.S. state with more than 1 million confirmed COVID-19 cases as the nation continues to face a surge of infections.

The nation’s second-most populous state has recorded 1,010,364 coronavirus cases with 19,337 deaths since the pandemic began in early March.

Texas had recently surpassed California, the most populous state, in recording the highest number of positive coronavirus tests.

There were 94 new deaths Tuesday, according to the Texas Department of State Health Services.

On Tuesday, Dr Mark Ghaly – California’s health and human services secretary – warned that the number of people in hospital with COVID-19 had soared 32 percent in the last two weeks, while ICU admissions rose 30 percent.

As a result, he ordered three counties – San Diego, Sacramento and Stanislaus, home to more than 5.5million people – to shut indoor restaurants, close gyms, and ban indoor religious ceremonies to combat the surge.

‘We anticipate if things stay they way they are… over half of California counties will have moved into a more restrictive tier’ by next week, Ghaly said.

In Minnesota, Governor Tim Walz announced new restrictions as the Midwestern state reported a fresh record high in daily COVID-19 hospitalizations, and medical systems in Minnesota expressed concerns about their ability to cope with the surge.

Beginning Friday, restaurants and bars in Minnesota must close dine-in services between 10 p.m. and 4 a.m., and keep the number of patrons below 50% of capacity.

The governor’s order also includes private social gatherings, which must be limited to 10 people from three households or less.

‘We’ve turned our dials, we’re going to have to turn them back a little bit today,’ Walz told a briefing. 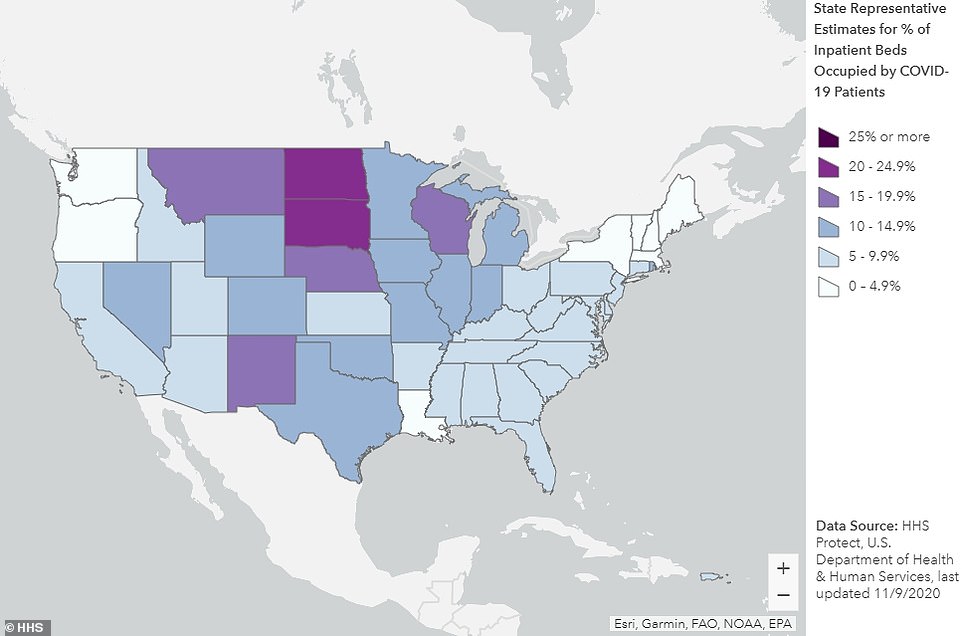 Coronavirus patients occupy the greatest percentage of hospital beds of any states in North and South Dakota, HHS data shows, though it tends to lag and North Dakota now says its hospitals are at 100% capacity 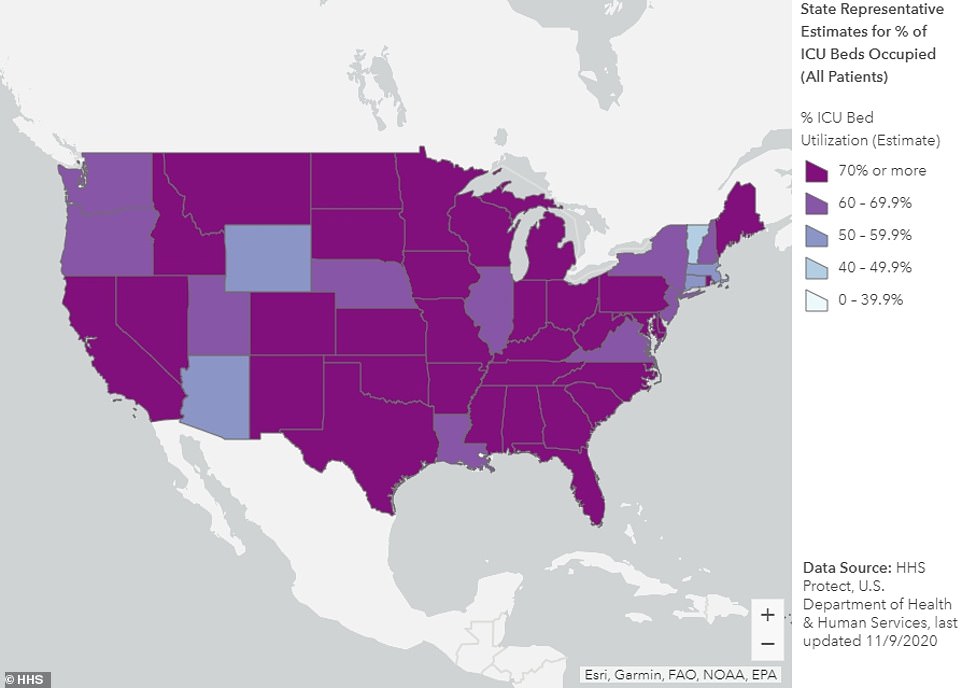 North Dakota is currently testing more than most across in the US and is seeing the steepest daily rises in coronavirus cases.

In a desperate attempt to keep facilities staffed, he revised a mandate to allow health care workers who have COVID-19 but are asymptomatic to continue to work.

Another 894 people in North Dakota were diagnosed with COVID-19 yesterday, suggesting more hospitalizations may be to come. The state reported another 29 deaths, setting its record for single-day fatalities.

Yesterday, the state saw more than 1,000 new cases and three new deaths as hospitalizations rose to 566. The state has begun doing surge testing in 10 areas where the virus is spreading rampantly.

It comes as infectious disease expert Dr Anthony Fauci called on Americans to remain vigilant until a vaccine can be approved and distributed. 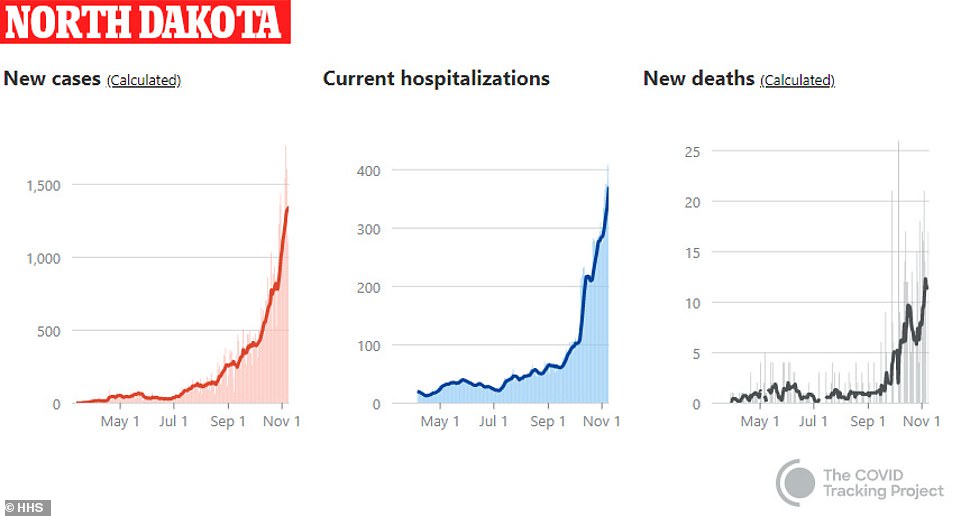 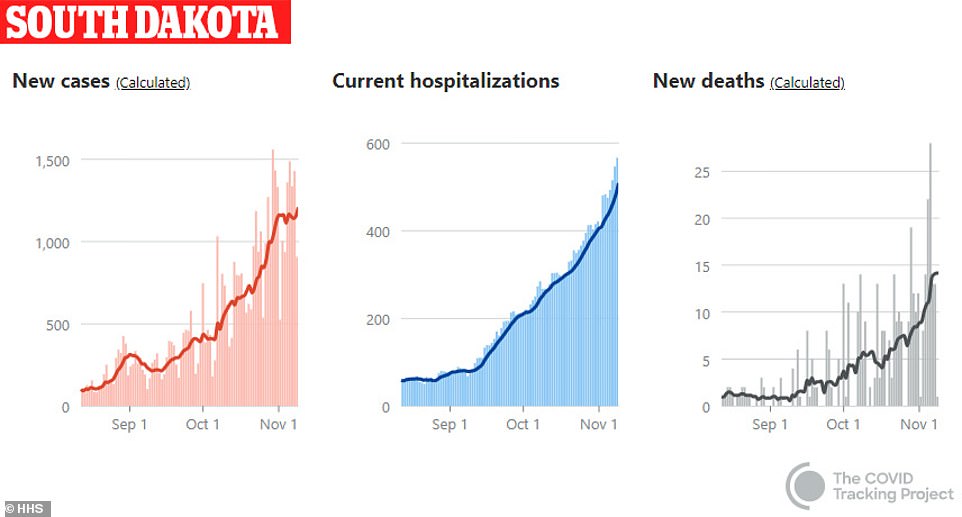 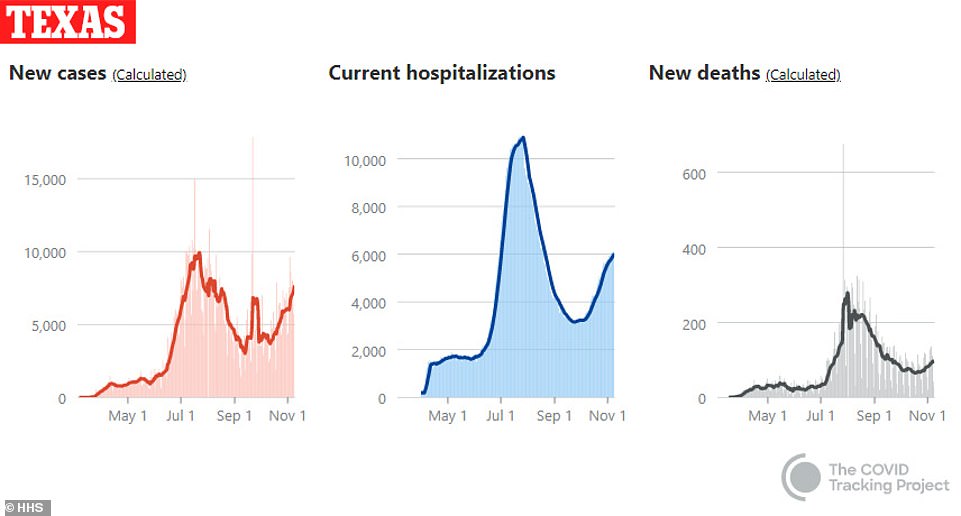 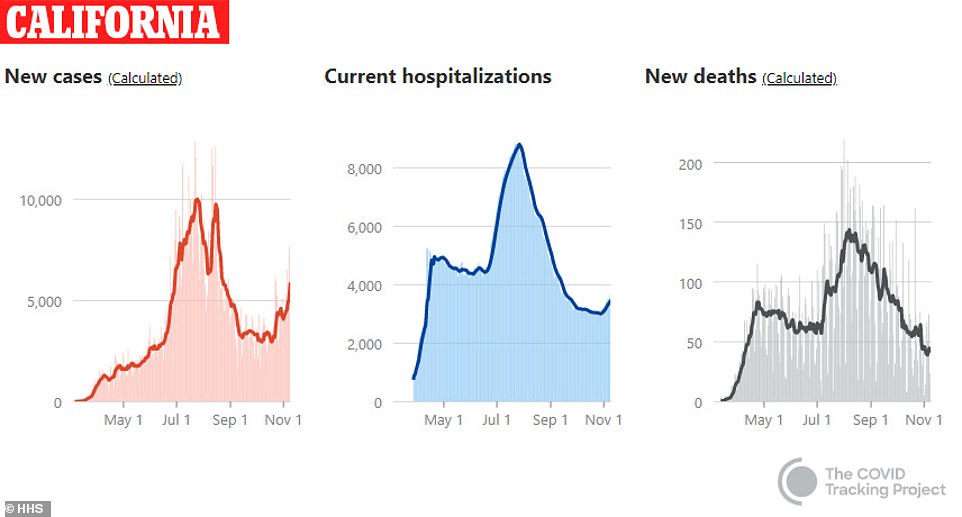 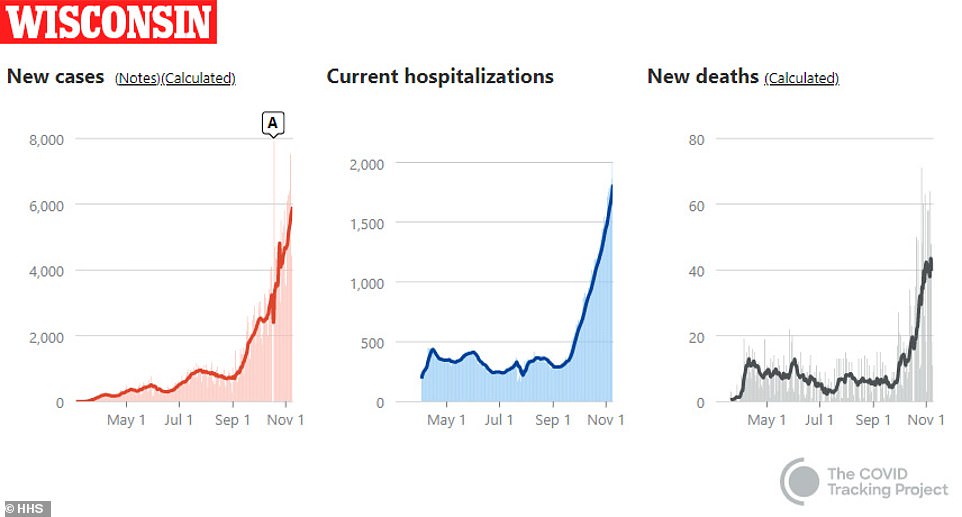 He said health officials were reporting more infections from small gatherings, an indication the virus is being spread by asymptomatic people.

‘There are people out there, innocently and unwittingly, who are infected, don’t have any symptoms, who are infecting others,’ he told MSNBC on Tuesday.

‘So, much more widespread testing of asymptomatic individuals is going to be very important as we enter, and go into, these months of indoor-type gathering.’

President-elect Joe Biden on Monday convened a 13-member task force to devise a blueprint for combating the pandemic, which has claimed more than 238,000 lives in the United States alone.

A task force member, Dr Michael Osterholm, said on Tuesday that the country would see ‘the darkest days of this pandemic between now and next spring when a vaccine becomes available.’

‘I think it is no question that our hospitals are about to be overrun,’ he added in an interview with ‘CBS This Morning. ‘ 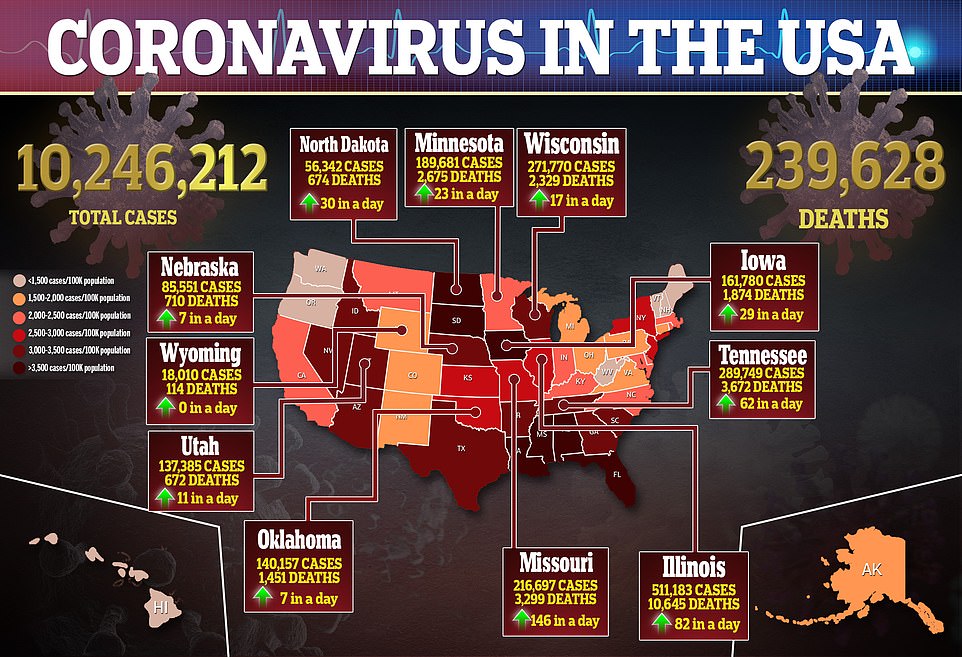