National Grid may have to issue emergency orders to switch off power plants and wind farms this summer as the coronavirus pandemic hits demand and threatens to leave Britain’s networks overwhelmed by too much electricity.

With factories, shops, schools and offices shut down across Britain, demand for electricity has dropped by 20 per cent.

Today, wind farms are supplying around 32 per cent of Britain’s electricity demand, producing more than 7,000 megawatts of power, however, the National Grid has noticed an oversupply of electricity during the lockdown.

Homeowners are using more power domestically, but that is significantly less than the amount which would ordinarily be used by industry.

National Grid has now warned that, on some days this summer, electricity demand may fall below the ‘baseload’ output from inflexible power plants, such as nuclear power reactors, which can take hours to shut down safely.

This means that the power plants would have to be switched off to avoid overloading the grid – which could lead to local blackouts.

The lockdown has already had an impact on electricity demand, after it fell to record lows of 15.2GW over the Easter weekend, sharply below forecast lows of 17.6GW for this summer due to the mild, sunny weather. 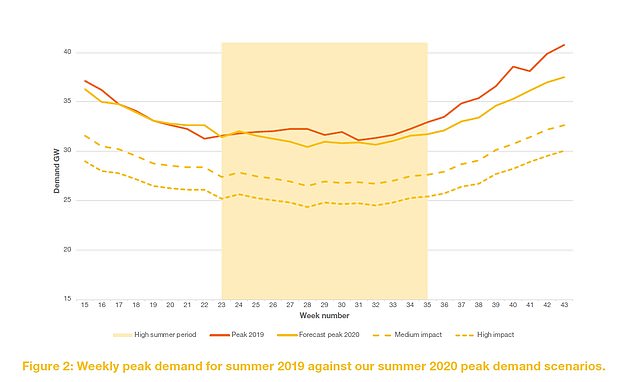 The National Grid released its 2020 Summer Outlook Report earlier this week which outlines the measures it is taking to deal with the Covid-19 shutdown.

The Outlook Report estimates the demands on the nation’s electricity network in order to plan ahead.

According to the report, experts claim demand could fall by between 4 per cent and 20 per cent over the summer.

The National Grid is confident they will be able to provide a good electricity service over the summer.

However, experts have warned that the combination of high levels of power generation and low demand can raise the risk of overloading local energy grids.

It can also reduce the resilience of energy systems to sudden changes in frequency – which could lead to temporary blackouts.

Now, the National Grid control room expects to pay flexible windfarms that are able to power down quickly to switch off at short notice. 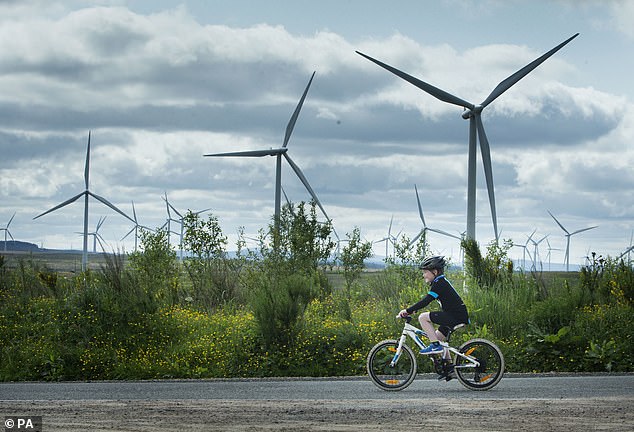 Experts have warned that the combination of high levels of power generation and low demand because of coronavirus can raise the risk of overloading local energy grids – meaning power plants and wind farms may have to be shut down this summer. Pictured is Whitelee Windfarm in East Renfrewshire, the UK’s largest onshore wind farm

It will also cut imports through subsea cables from Europe to avoid overwhelming the electricity grid.

It is also planning to pay hydro power projects to act as giant ‘virtual batteries’ by using the extra electricity to pump water up into lakes before releasing it again later if power supplies threaten to eclipse the country’s demand.

Roisin Quinn, who is head of the national control room said: ‘We’re constantly analysing the impacts of coronavirus on electricity in Great Britain, including in this year’s Summer Outlook report.

‘As system operator we know that millions of people rely on us every day to keep the lights on and we want to reassure everyone that we do not expect the operation of the electricity system to be adversely affected.’

Ms Quinn said the ongoing lockdown and social distancing measures are likely to lead to lower demand for electricity.

She said: ‘For many the assumption will be that lower demand makes it easier for us to do our job, with less power needed overall and therefore less stress on the system. In fact, as system operator, it’s just as important for us to manage lower demand for electricity as it is to manage the peaks – it’s a different set of challenges that we plan for and are used to dealing with, and we will draw on this experience in the months ahead.’

National Grid’s director, Fintan Slye, said that although the situation was ‘very fluid’, the company was taking several steps to ensure British consumers will still be able to receive secure and reliable electricity.

Paying wind farms to switch off isn’t a new phenomenon, particularly in networks in the north of Scotland, where demand for electricity is low while wind power out is high.

However, the curtailing of wind farms is likely to be unprecedented this summer.