The strawberry blossom has just started to appear on Christine Snell’s farm, turning her corner of Herefordshire into a riot of colour and heralding the arrival of spring.

In exactly six weeks, the endless sea of yellow and white flowers will have been replaced by hundreds of thousands of berries, each turning slowly red in the sunshine.

Over a normal season, more than 2,000 tons of fruit will be picked from the 500 acres of rolling countryside Christine and her husband Anthony farm, before being sorted and packed on site and shipped to the nation’s supermarkets.

Pictured: Members of the Women’s Land Army walk with pitchforks over their shoulders during the Second World War in 1943

But this is no longer a normal season.

Instead, thanks to coronavirus, Christine has a mountain to climb. For like almost every British farmer whose crops must be picked by hand — and that covers a vast range from berries and asparagus to salads, apples, pears and hops — she faces an unprecedented struggle to get her produce from field to fork.

The Snells, like almost every other producer in our horticultural sector, employ several hundred seasonal labourers to harvest their crops each summer.

Around 98 per cent come from Eastern Europe — but now, with much of Europe in lockdown, they cannot get here.

So she will need to recruit replacements in the UK — the Government has designated pickers critical workers because they are in food production — in incredibly short order. If that fails, the Snells’ crops will be left to rot.

‘In peak season, we need between 250 and 300 people to keep up. We currently have just 50 on site,’ she says. ‘If you don’t pick fruit at the moment it ripens, it will very quickly go mouldy, and all the new fruit that appears will also be affected.’ 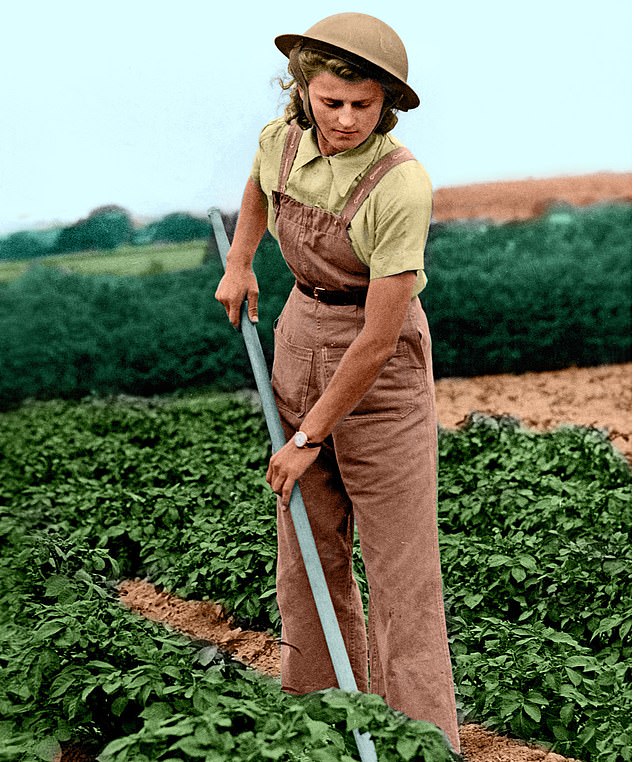 The UK is self-sufficient in most summer fruits for roughly six months of the year. Pictured: A Land Girl works on a farm

For Christine and Anthony, who have spent 30 years building their operation, the implications of that would be simply devastating. And if crops go unharvested, across the country, then every single one of us will be affected.

The UK is self-sufficient in most summer fruits for roughly six months of the year.

If strawberries — we eat 74,000 tons annually — and other produce disappear from the food chain, then the UK will either have to import extra supplies (no easy feat during a global pandemic) or simply go hungry.

‘From a financial point of view, not being able to find pickers would be a disaster for us. We have already put almost £1 million into this year’s harvest,’ Christine says. ‘But if it affects us, it will affect farmers everywhere and that’s a disaster for Britain because food will just disappear from the shelves.’

Food security is a serious matter that coronavirus has forced into national consciousness. Forget disappearing loo rolls and pasta, what will happen if all fresh fruit, veg and salad produced in the UK vanished from the supply chain?

All of which is behind the launch of a campaign called Feed The Nation, which aims to find Britons to fill some of the 90,000 seasonal agricultural jobs traditionally taken by overseas workers.

And it could prove every bit as important in helping our nation survive over the coming months, as the campaign to recruit tens of thousands of volunteers to assist the NHS.

‘Without wishing to alarm people, this is a genuine national emergency,’ says Stephanie Maurel, the chief executive of Concordia, a recruiter supplying around 8,000 seasonal workers. 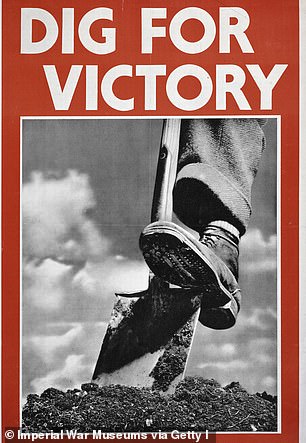 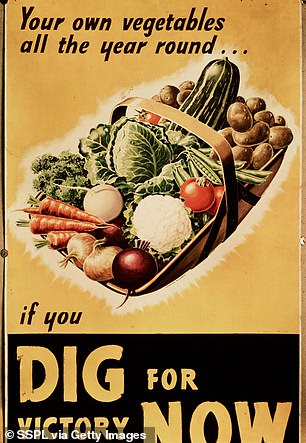 ‘Food is growing. It can’t be stopped. And if it doesn’t start to get picked very soon, then fruit crops will rot, lettuce will get attacked by birds.

‘It will create a massive hole in our ability to prevent the population from going hungry.’

Maurel’s non-profit, ethical organisation was founded in World War II to help mobilise German prisoners of war and exiled French troops to harvest crops as part of the national effort to Dig for Victory along with the Land Girls.

She believes that this moment of national crisis, already likened to a war by Downing Street, merits a similarly Churchillian response.

‘We are looking for anyone: workers who have recently lost their job, particularly in the hospitality sector, students who have been sent home, anyone. Please, please come forward. You will be offering a crucial public service, and earning good money in the process.’

Since the campaign was launched last week, around 8,000 people have signed up. Maurel hopes that a ‘good portion’ will be assigned to local farms in the coming weeks. But the stark truth is that we need tens of thousands more.

Of course, it won’t be easy: farm work is notoriously tough but it’s also well paid and rewarding, and relatively easy to do while maintaining all-important ‘social distancing’ protocols.

‘I’ve done it. It’s no picnic. But you roll up your sleeves, strip off your nail varnish — and work hard,’ says Maurel. ‘Your back will ache for the first two weeks but after that it’s generally OK.

‘On a nice day, when the sun is on your back, it’s a lovely job, but when the rain’s coming down and there’s mud up to your knees, well. . .’

On the Monmouthshire, Herefordshire and Worcestershire borders, where I live, volunteers are needed particularly urgently.

Known as the ‘asparagus triangle’, this area produces roughly a quarter of the country’s asparagus. In many locations, harvest is due to start as soon as next week.

‘Asparagus needs a lot of management because it grows in fits and starts, and if it isn’t cut constantly then it will go to seed and that’s the entire season gone,’ one local producer told me this week. ‘We are days away from needing to start that process, and I am at least 200 workers short.’

Another farmer, who supplies almost every major retailer, told me just 80 of the nearly 1,000 workers they need to have on site eventually are currently in the UK. ‘Some are getting here but it’s really just dribs and drabs,’ he says.

‘Asparagus can grow four inches a day. You can almost see it growing, and it needs cutting fast.

It must be said that this farmer (who asked to remain anonymous) is, like many of his peers — and based on their previous experience — somewhat pessimistic about a flood of British workers responding to the call. But for now, he’s crossing his fingers.

‘Maybe this year will be different,’ he adds. ‘I can only pray that it is. The consequences are otherwise too dreadful for me to contemplate.’

In Lincolnshire, where a huge proportion of the UK’s domestic salad crop is produced, farmers are also hoping Feed The Nation will keep them in business.

Stuart Piccaver, whose 1,200-acre family operation Jepco produces up to 500 tons of leaf salad, spring onions, lettuce and spinach every single week, says he needs to recruit roughly 150 workers by the end of April.

‘In normal years, guys from Eastern Europe book a placement with us. We haven’t completely given up on them getting here this year.

‘We could even charter flights, if necessary, because they’re designated critical workers. But it’s going to be tricky — and we’ll need a massive drive to replace them if not.’

Stuart is urging students whose courses have been cancelled to pull together groups of friends to take to the fields.

They would not only be performing a public service but helping to pay off their student loans. It is, he says, a ‘no-brainer’.

‘People who sign up need to know what they are coming to. It is hard. But once you become fit and get used to it, you’ll find it very rewarding,’ he says.

Typically, farm work pays the minimum wage (which will increase to £8.72 per hour from next month), plus a bonus depending on how quickly you can work.

Most competent pickers clear £10 per hour, and experienced workers take home around £100 a day, working six days per week.

Almost every producer will house workers on site, in subsidised accommodation which costs around £50 per week.

Sarah Boparan, chief executive of HOPS, a major recruiter owned by the National Federation of Young Farmers, which is supporting Feed The Nation, says workers must be able to cope with early starts (around 5am is typical in the summer) and occasionally long hours.

‘You are working in all weather conditions, it’s repetitive and farmers need to be able to count on you coming in every single day,’ she says. Some days, you will start very early, as early as 3am or 4am because strawberries go squishy if they get the sun on them. If we don’t rise to this challenge, the consequences will be devastating.’

Will today’s young Britons, increasingly dismissed as snowflakes or couch potatoes, respond to this call? In Kent, the Garden of England, they certainly hope so.

Marion Regan, whose 120-year-old family business Hugh Lowe Farms supplies berries to every supermarket, has roughly 175 workers on site at present but needs 700 to bring the crops in. She is now receiving a ‘steady trickle’ of interest after posting an urgent plea on her website.

She says: ‘Some are people who have lost jobs and don’t know where the next pay cheque is coming from. Some are students who planned to work at summer events or go travelling.

‘And we are also seeing local, public-spirited people who want to help bring in the harvest. If there’s a bright spot in this maybe it will reinvigorate that old Kentish tradition of people working in the fields each summer.

‘But this is a genuine emergency and anyone who does decide to help out on a farm will be playing a crucial role in the battle against this disease.’