Thousands of ventilators bought to treat Covid-19 patients are sitting in warehouses due to a lack of demand, the spending watchdog has revealed.

Ministers prioritised ‘speed over cost’, meaning they paid 50 per cent over the odds for foreign-supplied machines, the National Audit Office (NAO) found.

In one case, 750 ventilators purchased at a cost of £2.2million had to be withdrawn on the advice of clinicians.

The Government also spent tens of millions of pounds on British designs which were ultimately not needed.

The NAO found that the overall cost of programmes to acquire ventilators has been higher than would be expected ‘in normal times’, but that efforts had been made to control costs.

Thousands of ventilators bought to treat Covid-19 patients are sitting in warehouses due to a lack of demand, the spending watchdog has revealed

It found that overall the Government spent £569 million on ventilators through programmes set up by the Department of Health and Social Care and the Cabinet Office.

At the start of the pandemic, modelling from China suggested that up to 30,000 ventilators would be needed to treat patients with coronavirus in the UK.

By early August, the British Government had acquired more than 30,000 ventilators, including around 9,100 already available to the NHS, 2,600 units purchased by the Department of Health and 12,300 built through the Cabinet Office’s ventilator challenge programme, the NAO found.

In addition, by July 9, the NHS had 27,700 non-invasive ventilators and ‘continuous positive airway pressure’ machines, which act as an interim treatment for people struggling to breathe.

This included up to 17,800 purchased by the Department of Health since March.

The NAO study said that most of these new ventilators are ‘being held in reserve’, adding: ‘As at September 16 only around 2,150 mechanical ventilator units acquired through the programmes had been dispatched to the NHS. 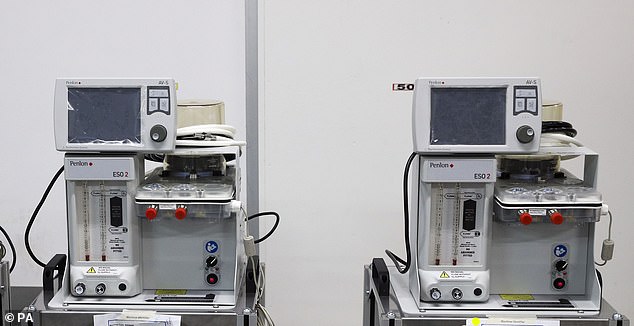 The NAO found that the overall cost of programmes to acquire ventilators has been higher than would be expected ‘in normal times’, but that efforts had been made to control costs

‘This is because the anticipated demand did not materialise. The remaining units, which were largely purchased in case of increased demand in future waves of Covid-19, are stored in warehouses, including the Ministry of Defence’s facility at Donnington, as a central reserve.’

The NAO said the Department of Health and NHS England and Improvement had said some of these devices are now being distributed to NHS trusts to prepare for potential future waves of Covid-19.

The study found that in the rush to buy ventilators, the government had to pay more than normal rates. Ventilators which came from established NHS suppliers cost an average of £20,000 each – but those from new suppliers on world markets cost £30,100.

And it said ministers spent £113million on design costs, components and factory capacty for ventilators they did not buy because they were unviable or were not needed.

The NAO study also found that the Department of Health has spent around £292million excluding VAT on its ventilation programme.

Meanwhile, the Cabinet Office has spent around £277million excluding VAT on the ventilator challenge.

The NAO said the Government had prioritised speed over cost, but added: ‘Inevitably, given the approach the departments took, the overall costs of both programmes are higher than we, or the departments, would expect to see in normal times.

‘However, both departments maintained sufficient record of their programmes’ rationale, the key spending decisions they took and the information they had to base those on.

‘They also put in place effective programme management, controlled costs where they could and recovered some of their committed spending once it became apparent that fewer ventilators were needed than they had originally believed.’

Gareth Davies, the head of the NAO, said: ‘The Government acted quickly to secure the thousands of ventilators it thought it may need to safeguard public health.

‘In the event far fewer ventilators were required than was anticipated during the first phase of the pandemic, resulting in a stockpile that may be needed for future peaks in clinical need.

‘As with all aspects of its pandemic response, the Government should ensure that the learning from this experience is used to enhance its contingency planning for future public health emergencies.’