Criminals locked up in prison should among the first groups of people to get a coronavirus vaccine when one is available, experts have today urged.

Oxford scientists looked at the risk coronavirus poses to prisoners and found the close proximity to other people, reluctance to disclose symptoms and high prevalence of comorbidities makes society’s incarcerated a ‘high-risk’ group.

Professor Seena Fazel led a review of 28 studies looking at prison outbreaks, including of TB, flu and Covid-19.

He believes there needs to be discussion among politicians and experts about how to protect this ‘vulnerable’ group of people and to determine where they will fit in the Government roll-out of a vaccine.

Plans previously released by the Joint Committee on Vaccination and Immunisation (JVCI) do not specify where prisoners are on the priority list.

Currently, care home residents and staff will be the first to get a Covid-19 vaccine when one is approved. Everyone over the age of 80 and NHS staff will be second.

Professor Fazel told MailOnline prison workers should fall into this group because of the risk of them transmitting the virus from the community into the prison, and vice versa.

The jabs will then be prioritised according to age and general health, with healthy under-50s last in line.

However, Professor Fazel’s proposal would see prisoners skip the queue and be ahead of over 60s, but behind over-65s.

‘My view would be around the category of “high risk adults under 65”,’ Dr Fazel told MailOnline.

‘There is also the issue of prison officer and other prison staff – not sure where they should go. Possibly with other health and social staff.’ 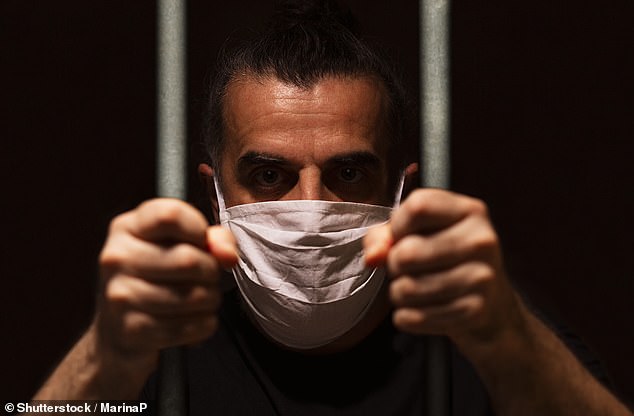 Oxford scientists looked at the risk coronavirus poses to prisoners and found the close proximity to other people, reluctance to disclose symptoms and high prevalence of comorbidities makes society’s incarcerated a ‘high-risk’ group (stock)

WHERE WOULD PRISONERS SIT IN COVID VACCINE PECKING ORDER?

The non-bold text indicates the official guidance from the Joint Committee on Vaccination and Immunisation (JVCI).

The text in bold indicates the proposed additions suggested by Oxford academics in a new study.

There have been several coronavirus outbreaks in prisons.

One organisation claimed that in early June, across 79 countries, 73,254 prisoners tested positive for COVID-19, of which more than 1,100 died from complications.

‘Overall, infection rates in custodial facilities both among prisoners and staff appear to be higher than in the general population, including in the USA, and England and Wales,’ the researchers say in their study.

Last week, the Yorkshire Ripper Peter Sutcliffe died of SARS-CoV-2-related pneumonia, effectively the same as Covd-19, which he caught while at HMP Frankland in Durham.

In the study, published recently in the journal BMJ Global health, the researchers explain that prisons are petri-dishes allowing for swift spread of infection.

‘There is a high risk of rapid transmission due to high population density and turnover, overcrowding and frequent movements within and between establishments,’ the researchers write.

‘In addition, there is a high proportion of people in prison who may be more vulnerable to severe COVID-19 due to underlying risk factors (such as male sex, older adults and having chronic underlying health conditions).

‘In England and Wales, for example, around 95 per cent of prisoners are men, and four per cent are aged 60 and older.’

Professor Fazel said: ‘Prisons are high-risk settings for the transmission of contagious diseases and there are considerable challenges in managing outbreaks in them.

‘Our research suggests that people in prison should be among the first groups to receive any COVID-19 vaccine to protect against infection and to prevent further spread of the disease.

‘The prison population is generally at higher risk of complications from infection because of the increased prevalence of underlying health conditions, and the overrepresentation of marginalised groups that have been disproportionately affected by COVID-19.

‘A public health approach to managing COVID-19 in prisons is important now and for any future infectious disease outbreaks.’

Today, leaked NHS plans reveal coronavirus vaccinations could be under way as soon as next month if a vaccine is approved on schedule.

HOW DOES THE NHS’S SCHEDULE LOOK?

The NHS’s preliminary vaccination schedule in documents leaked to the Health Service Journal suggests vaccines could be offered to the public in this order:

Documents seen by the Health Service Journal suggest even those in the lowest risk group may be able to start getting vaccinated in just two months’ time if everything goes to plan.

The files say all pencilled-in dates for vaccines are dependent on the arrival of supplies – with up to seven million doses expected next month – and are based on NHS proposals to create huge GP-run facilities to deliver the shots.

Regulators are expected to approve at least one vaccine by the end of the year, with a £15-a-dose jab from Pfizer currently odds-on to be the first to get a licence.

The UK has ordered 40million doses of Pfizer’s vaccine – with the first batch set to arrive next month – and five million of Moderna’s – which are due in spring next year. It also has an order in place for up to 100million vials of Oxford’s candidate which scientists say should finish clinical trials by Christmas.

The leaked plans suggest vaccines could be made available to all UK adults by the end of January but the bulk of 18 to 50 year-olds would likely be vaccinated in March with an aim that everyone in Britain who wants a jab will have had one by April.

The roll-out of the coronavirus vaccine will be one of the biggest medical projects in modern British history and the rapid nature of the proposed timetable will inevitably prompt questions over whether it is actually deliverable.

Critics will likely point to the Government’s record on previous pandemic-related health initiatives like the delayed development of the contact tracing app and rocky first few months for NHS Test and Trace as evidence that ministers may struggle to hit the targets.

It came after Matt Hancock said vulnerable Britons could start to be vaccinated against Covid-19 within weeks, as he promised to take ‘personal control’ of the immunisation drive.

HOW DOES HANCOCK PLAN TO VACCINATE A MILLION PEOPLE A DAY?

The Health Secretary has revealed ambitions to inoculate a million Brits against Covid every day as soon as a vaccinate is given the green light by the UK drugs watchdog.

Though Mr Hancock has admitted it was going to be ‘one of the biggest civilian projects in history’.

Normally the NHS vaccinates 15 million people against flu every year winter over the space of about four months.

The Government plans to set up dozens of mass coronavirus vaccination sites across the country in the coming weeks.

Doctors, nurses, firefighters and soldiers will be trained up to help deliver the inoculations.

Retired medics, medical students and other NHS staff who normally don’t give vaccines – including physiotherapists – are also being recruited.

GP surgeries have been told to organise the initial wave, which will involve using community centres, village halls, and practices themselves to administer the jabs to care workers and the elderly as soon as next month.

The NHS is establishing a series of much larger venues to inject millions of others once those at the top of the priority list have had the jabs.

Empty NHS Nightingale Hospitals and sports centres, including the Derby Arena, area are reportedly being lined up as possible venues.

Mr Hancock told Sky News the roll out should be ‘relatively straightforward’ because the NHS has the infrastructure.

But the health service will have to juggle the unprecedented Covid drive with the biggest flu vaccination programme ever – 30million people are being vaccinated on the NHS compared the 15million normally.

There is also the logistical problems with Pfizer’s vaccine – which looks set to be the first jab to be approved.

It needs to be stored at -70°C (-94°F), which means the UK will need to buy specialist freezers and huge supplies of dry ice.