Rishi Sunak’s deputy today swatted away suggestions of a rift between the Chancellor and Boris Johnson over the Government’s coronavirus strategy.

Chief Secretary to the Treasury Stephen Barclay insisted both men were working ‘in tandem’ and denied Numbers 10 and 11 were adopting different approaches.

Mr Sunak yesterday said the nation needed to learn to ‘live without fear’, just days after the Prime Minister tightened coronavirus laws amid a steep rise in cases.

Unveiling his Winter Economic Plan, the Chancellor said ‘our lives can no longer be put on hold,’ which was widely interpreted to contradict the message from his boss.

Mr Johnson’s noticeable absence from the Commons chamber – he instead toured a police station in Northamptonshire – further fanned speculation of a rift. 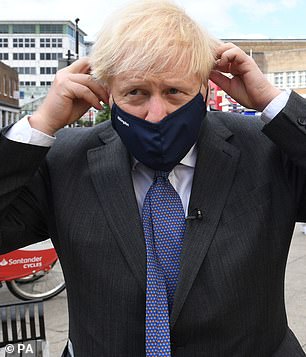 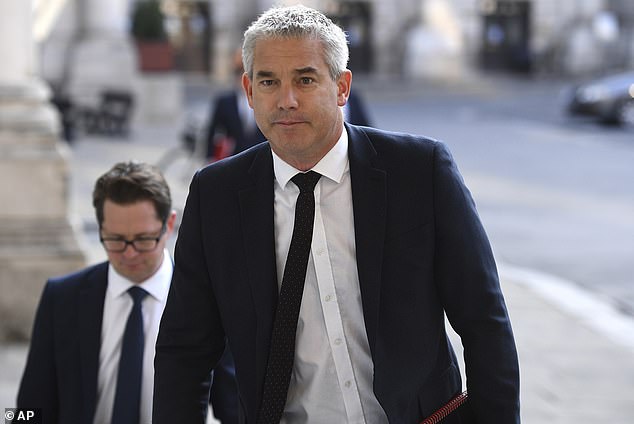 But Mr Barclay played down such reports and told BBC Radio 4’s Today programme: ‘The Prime Minister and the Chancellor are working extremely closely together and I think you can see that in the dovetailing of measures.’

He said there is a need to work ‘in tandem between both the health measures announced by the Prime Minister and those of the Chancellor’.

On Sky News, Mr Barclay was asked whether the Chancellor’s use of the word ‘fear’ was a suggestion that people should not follow the guidance.

He responded: ‘Quite the opposite. I think what’s very clear from the message, the Chancellor said we need to address the health risks in order to protect jobs.’

Downing Street insisted there is no rift at the top of Government, but Tory MPs are growing increasingly uneasy over the Government’s move to impose sweeping restrictions without Parliament voting on them. 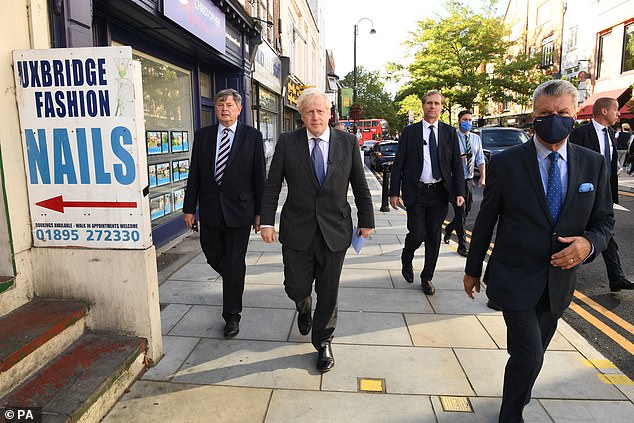 Prime Minister Boris Johnson meets shoppers and shopkeepers during a visit to his constituency in Uxbridge, west London 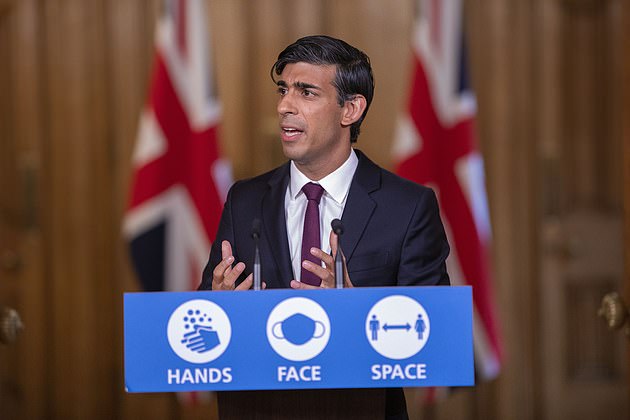 More than 40 Tory MPs have backed an amendment from Sir Graham Brady, chairman of the powerful 1922 Committee, which could force a debate on measures.

The number of rebels means could wipe out Mr Johnson’s 80-seat majority and see him lose the crunch vote.

Senior Conservatives have been impressed with the Chancellor, and backbench MP Tom Tugendhat praised Mr Sunak’s approach when asked whether it is No 10 or 11 that is running the show.

He told Today: ‘I’m sure the Prime Minister is running the Government. But I think Rishi Sunak did an extremely impressive job yesterday and I have to say he enjoys huge amounts of confidence on Conservative benches and when I speak to people around the country, and certainly the people I represent in Kent, he has huge support as well.’

His net approval ratings flying high in the polls, the 40-year-old Mr Sunak has been tipped as a potential future leader.

He was promoted to Chancellor in February after his predecessor Sajid Javid quit after refusing to sack his entire team of advisers.

Relations between Numbers 10 and 11 Downing Street have often been tested, memorably in the Blair/Brown years.