Police Scotland will double its presence along the border with England but will not set up checkpoints and road blocks to enforce Nicola Sturgeon’s coronavirus travel restrictions, Scotland’s top police chief said today.

Chief Constable Iain Livingstone said that he does not consider draconian curbs on cross-border travel ‘appropriate or proportionate’ as he doubled the number of officers in the Border areas.

In a statement, the Police Scotland chief said ‘highly visible patrols’ would instead ‘deter anyone who might be considering breaching the coronavirus travel restrictions’.

Indoor mixing will only be allowed on Christmas Day and most of Scotland will be put into the highest level of lockdown from Boxing Day, with a ‘strict travel ban’ preventing travel to other parts of the UK.

The First Minister last night cut the Christmas amnesty to one day after Boris Johnson plunged London and much of the South East of England into a brutal new Tier 4 lockdown amid rising coronavirus cases caused by a ‘mutant’ strain of the disease.

A ‘strict travel ban’ between Scotland and the rest of the UK will remain in place throughout the Christmas holidays while Indoor mixing will only be allowed on Christmas Day. It had been planned to ease the rules for five days, between December 23 and 27.

Tougher level four rules will also apply across mainland Scotland from Boxing Day and the school return date has been pushed back to January 11.

The draconian action has led to calls from public health scientists in Scotland for a Scottish-style ‘harsh lockdown’ across the whole of the UK to ‘really crunch’ coronavirus.

But Police Scotland today effectively undermined the Scottish Government’s coronavirus policy by admitting that checkpoints and road blocks will not be set up along the Anglo-Scottish border. 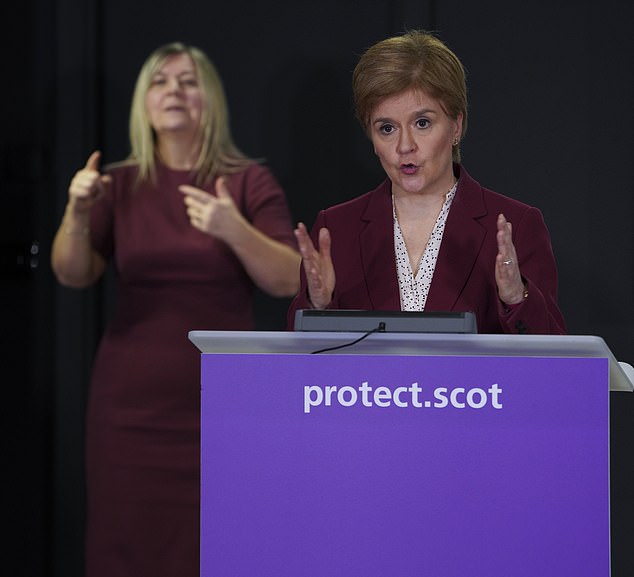 In a statement, Ch Con Livingstone said: ‘I remain clear I do not consider it appropriate or proportionate for officers to establish check points or road blocks to simply enforce travel restrictions.

‘These restrictions are a preventative measure to halt the progress of Covid and Police Scotland will support this approach with a strong operational profile to deter those who would put others at risk.’

He continued: ‘Today, I have authorised the doubling of our operational presence in the Border areas of Scotland.

‘These highly visible patrols will be proactively deployed on our road networks to continue our operational activity to ensure drivers and vehicles are in a fit condition to drive. The patrols will also deter anyone who might be considering breaching the coronavirus travel restrictions.

‘Our experience throughout the pandemic is that the overwhelming majority of people have demonstrated personal responsibility to do the right thing and I am hugely grateful for that support and co-operation. That must continue and I expect the roads to be quieter than usual over the coming days.’

A Scottish Government spokesperson said:’We are grateful to Police Scotland and operators for considering how they respond to this tightening of restrictions and their subsequent statement on the doubling of their operational presence in the Border areas of Scotland and that officers will act decisively where they encounter breaches of the law.

‘These visible patrols will act as a deterrent and continue the common sense approach to enforcing the new laws to prevent the spread of the virus to protect lives and avoid overwhelming the NHS.’

‘Clearly this virus does not respect borders but a range of exemptions have always been in place to allow safe and necessary travel for valid reasons, and we need to know if that has changed.’

It comes as Professor Devi Sridhar, the chairwoman of global public health at Edinburgh University, today suggested that the whole of the UK be subjected to a Scottish-style ‘harsh lockdown’. 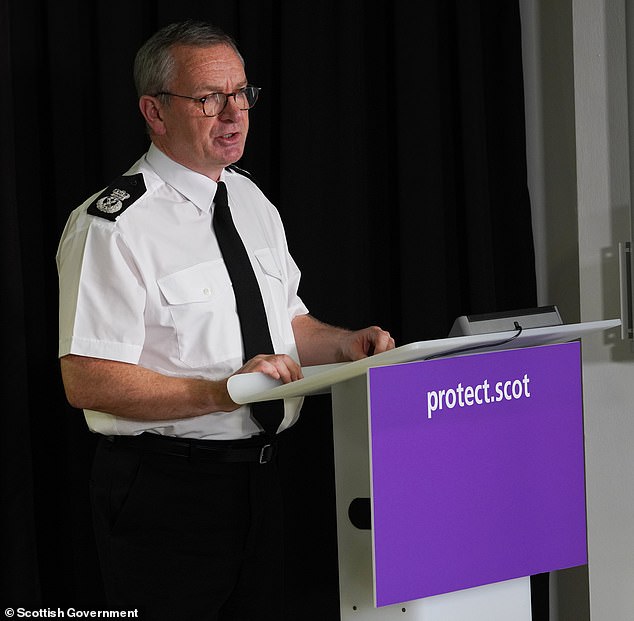 In a statement, the Police Scotland chief said ‘highly visible patrols’ would instead ‘deter anyone who might be considering breaching the coronavirus travel restrictions’

The Health Secretary sighed and shook his head as Sky News’s Sophy Ridge on Sunday programme showed him social-media images of large crowds queueing on a packed platform at St Pancras Station.

In a round of TV interviews this morning, Mr Hancock said people living in brutal new Tier 4 regions in London and the South and East of England should ‘unpack their bags’ and ‘restrict social contact’ this Christmas.

He hinted that the tough restrictions on movement will be in place for months and warned that ‘of course’ police will enforce the new law and will prevent people from leaving Tier 4 areas.

‘If we look at Scotland, Scotland was already running a lower infection rate but to go into quite a harsh lockdown over the holiday period, to extend the school holidays, to really try to get those numbers low, I think, I would hope the rest of the UK would follow that model, which is we have got to really crunch this,’ she said.

‘We have got to eliminate as much as possible to the lowest level of this virus because that is how we will reopen our economy.’

She added that this was the lesson from East Asia, Pacific countries and Norway and Finland which have kept numbers low through public health guidance and measures.

Prof Sridhar also said it is too early to tell how severe the effect of the new strain of coronavirus will be. She said there are three pieces of information scientists are looking for.

‘The first is, is it more infectious – is it doubling time faster – and it seems like it is, and this is what is really concerning, because it is going to become harder to supress it with our exiting tier systems,’ she said.

‘The second is, are health outcomes more severe – do we see more hospitalisations – and we just don’t know that yet.

‘And the third is, could it evade our vaccines if it actually changes quite significantly and so we don’t know that either. It seems like the vaccines are still effective.

‘But this just also shows why supersession is important. The more virus that is circulating the more chances there are to have different mutations as well as jumps into different animals, across species and back into humans and then it is harder for us to keep a handle on the situation.’

She said schools should be kept open as much as possible during the pandemic but a distinction should be made between younger children who are unlikely to spread the virus and older pupils.

‘I think we need to divide kids under 12 which we know generally have not transmitted that well between each other – we haven’t seen many outbreaks in nurseries and primary schools – and secondary schools where children are very much like adults after age 12 and how we manage those,’ she said.

‘But schools need to be kept open as much as possible and the way to do that is to keep our community prevalence low so viruses never even enter the school in the first place.’

She added that low level restrictions over a long period of time are ‘not going to work with this virus’ and that a broader strategy is needed. 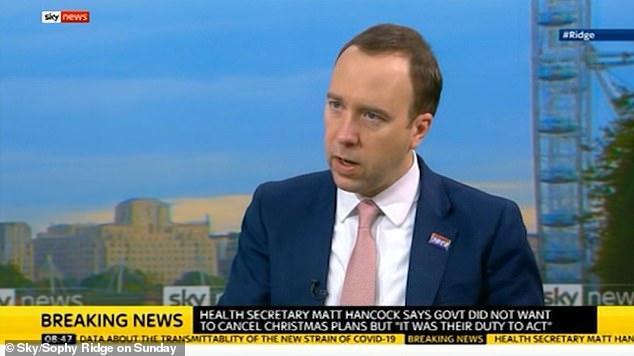 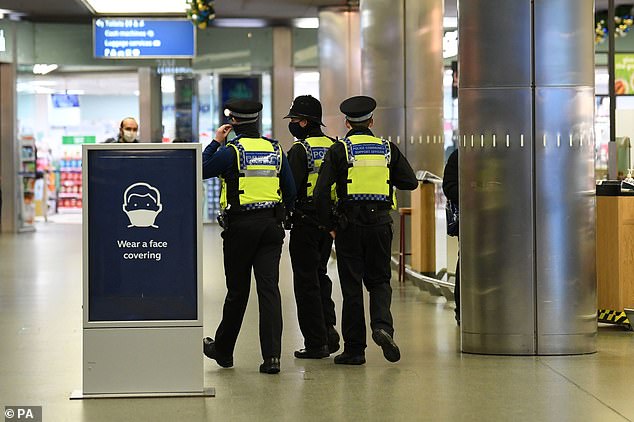 Police officers at St Pancras Station, London, with more being deployed to enforce travel rules at the capital’s stations 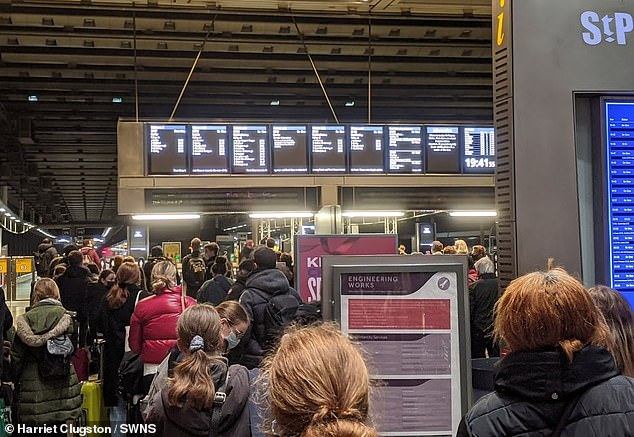 Christmas plans have been left in tatters amid new Covid curbs as some airlines refuse to refund passengers for trips they can no longer take.

Boris Johnson effectively cancelled Christmas for almost 18 million people in London , south-eastern and eastern England as the region was put into a new two-week lockdown from Sunday.

Under the new Tier 4 rules non-essential shops – as well as gyms, cinemas, casinos and hairdressers – have to stay shut and people are limited to meeting one other person from another household in an outdoor public space.

Those in Tier 4 were told they should not travel out of the region, while those outside were advised against visiting.

British Airways and Virgin Atlantic have revealed they will not be offering refunds to passengers who cancel trips for the end of the year following the new restrictions.

The Virgin Atlantic Twitter account posted: ‘Refunds are only permitted for cancelled flights. If you have booked with us directly, you have the option to rebook for a new travel date up until 31 December 2022.

‘If you have booked with a third party, please contact them directly for your options.’

The First Minister said the new rules ‘make me want to cry’, adding: ‘I know how harsh it is, but this virus doesn’t care about anything apart from spreading as far and wide as possible’.

‘We will allow Christmas Day to go ahead, but as we have said from the start, only use this flexibility if you really, truly need to.

‘Our advice is still not to meet indoors even on Christmas Day with other households if you can possibly avoid it.’

Her national clinical director today warned that people should not be meeting at Christmas ‘just to have a party’.

Jason Leitch told BBC Breakfast that Christmas bubbles should be used to ‘help with social isolation and caring’ but not ‘just for Christmas, just for a party, just so they can see people who they’ve missed’.

‘I will not be seeing my 80-year-old parents on Christmas Day for the first time in my whole life,’ he said.

‘But I want to have another 15 Christmases with them, that’s why. So it’s important people make that choice for themselves.’

He said ‘Scotland’s numbers are lower’ but preventative action against the new strain of coronavirus was still necessary.

Mr Leitch said he is ‘pretty confident’ the Covid-19 vaccine will work on the new variant of the virus. The vaccine and treatments will work against the strain, he said, but the rate at which it transmits is worrying.

He said: ‘We are pretty confident from first principles, looking at it down a microscope for lack of a better description, that the vaccine will work but we need to prove that.’

The new variant of the virus will have to be grown at the Porton Down laboratory in Wiltshire, he said, and then be attacked by antibodies to see if it can be killed.

He said virologists are pretty confident that what has been seen so far ‘doesn’t worry them’.

Mr Leitch added that the R number, the reproduction rate, of the new strain is higher.

‘So imagine you have an R number right now of 0.9 – you think you are doing well, numbers are falling, everybody is transmitting to fewer than one other person, you are on the right path, then you get this dominant strain and your R number overnight goes to 1.3 and you get exponential growth and you are in big trouble.’