The pandemic has caused a ‘hidden backlog’ of almost 5million people needing NHS treatment, a report has revealed.

Referrals for routine hospital care plummeted by a third between January and August.

There were 4.7million fewer people referred for treatment – such as hip, knee and cataract surgery – compared to the same period the year before, the Health Foundation revealed.

The think-tank warned that long waits could now ‘become the norm for millions of people’ unless action was taken to protect non-Covid care.

There were 4.7million fewer people referred for treatment – such as hip, knee and cataract surgery – compared to the same period the year before, the Health Foundation revealed (File photo of surgeons in an operating theatre)

The suspension of many NHS services and fears over seeking care are likely to be behind the 34 per cent fall.

There were 622,593 fewer referrals for trauma and orthopaedics – which includes surgery for hip and knee replacements.

There were also 177,591 fewer people referred for mouth surgery in the first eight months of 2020 compared to the same period in 2019. And there was also a decline in the numbers referred in thoracic medicine, neurosurgery and urology.

Tim Gardner, who co-wrote the report, warned of a ‘rising tide of unmet need that will have a significant impact on people’s health if a sustainable solution is not found’.

He said: ‘The NHS made significant progress towards fully reopening services after the first peak of the pandemic, but there is still a potentially huge hidden backlog, as the health service is undertaking far fewer routine procedures compared to last year.’ 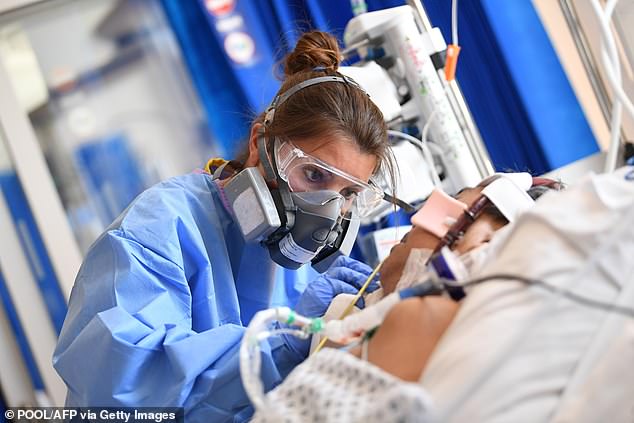 A member of the clinical staff wears personal protective equipment (PPE) as she cares for a coronavirus patient at the Intensive Care unit at Royal Papworth Hospital in Cambridge, on May 5, 2020

He added that radical interventions will be needed to avoid prolonged delays.

Making greater use of the independent sector, remote consultations, and creating dedicated diagnostic hubs and elective care centres would be needed to reduce numbers, he said.

Mr Gardner added: ‘There is no silver bullet – addressing these issues will take time, money and determination.’

Professor Neil Mortensen, president of the Royal College of Surgeons of England, said suspending elective surgery during the first wave of Covid had created ‘an enormous backlog of operations in a system which was already overstretched’.

He said the NHS was facing a ‘challenging few months’ and that every option should be explored to keep planned surgery going this winter.

He added: ‘Although frontline staff made huge efforts to get surgical services going again over the summer, it has been impossible to catch up.

‘People understand that this year it’s been very hard to stop waiting lists from getting longer. But now, with expanded testing capacity and a vaccine looking imminent, we cannot accept that the “new normal” means waiting a year for an operation.’

An NHS spokesman said: ‘The NHS message to the public has always been clear – do not delay, help us to help you by coming forward for care.

‘Keeping the virus under control is key to being able to continue all routine care so it is vital everyone plays their part by following Government guidance.’