The Mayor of Greater Manchester said today that he expects the UK Government to put the region’s 2.8 million people in the highest tier of coronavirus restrictions.

Andy Burnham said it is ‘more likely than not’ that Ministers will put his area in the ‘very high’ level when the national lockdown ends next Wednesday at 00.01am.

The 50-year-old told an online press conference this afternoon that statements from politicians in recent days suggested they would ‘err on the side of caution’.

But he added that he would want a ‘serious review’ of Greater Manchester’s position at the first review of tiering arrangements, which is due to happen after two weeks.

It follows a tense stand-off last month between the Government and the Labour former cabinet minister over whether to place the region into tier three. 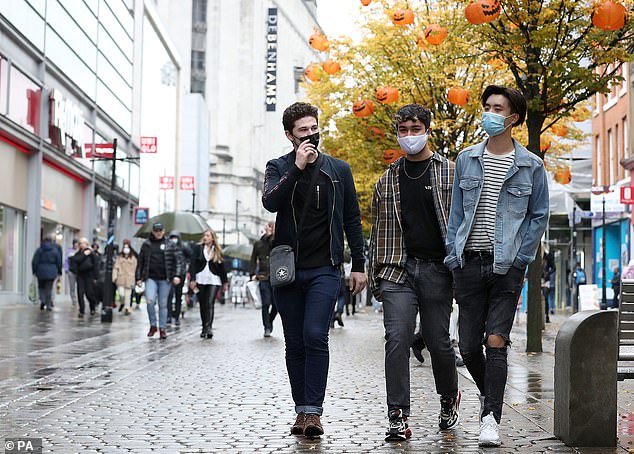 It emerged earlier this week that communities will not be consulted on which Covid tier they will be placed in following the lockdown – and will have no right of appeal.

The Government will set out a map tomorrow detailing which areas will go into each of the three new tiers of restrictions.

Mayor of Greater Manchester Andy Burnham welcomed the Government’s commitment to a devolved transport settlement and the announcement of an infrastructure bank in the north but criticised the Levelling Up Fund.

Speaking at an online press conference, Mr Burnham said: ‘Funding to invest in infrastructure is good but I think people need to look behind the headlines and slogans here because we don’t believe this will be doing much levelling up any time soon.’

He said Greater Manchester’s share of the fund would be £30million next year, which would not be enough to ‘get the real work under way to level up the country’.

He added: ‘I don’t believe you could say that amounts to a substantial plan to level up the country.’

Yesterday, the Health Secretary said the Government’s wrangle with Greater Manchester over coronavirus restrictions was a factor in changing its approach on how to apply the forthcoming tiers-based system.

Matt Hancock told MPs that the high-profile battle in October with the North West region over moving it into tier three restrictions had been ‘bad for public health’ and vowed not to let it happen again under the new system coming in next month.

Before the second national lockdown in England, ministers undertook negotiations with local authorities in order to settle on a package of measures to control rising rates of coronavirus infection in their areas, along with financial support to help mitigate any impact.

But a lengthy row last month with Greater Manchester saw the region’s mayor Andy Burnham undertake a host of defiant press conferences objecting to plans to put the 10 boroughs into Tier 3 – the most stringent of Covid restrictions.

The Labour mayor accused ministers at the time of treating the region as a ‘sacrificial lamb’ by asking it to accept a proposal which the ‘Government’s own advisers say won’t work’.

Under beefed-up tiers announced by the Prime Minister on Monday, due to come into force once the lockdown ends next Wednesday, there will no longer be a set of negotiations with local areas, with ministers instead relying on a formula to decide which areas are placed in what tier.

To make their decision, officials will look at coronavirus cases across all age groups, but specifically among the over-60s who are considered most at risk, along with whether infection rates are rising and the prevalence of the disease per 100,000 of the population. 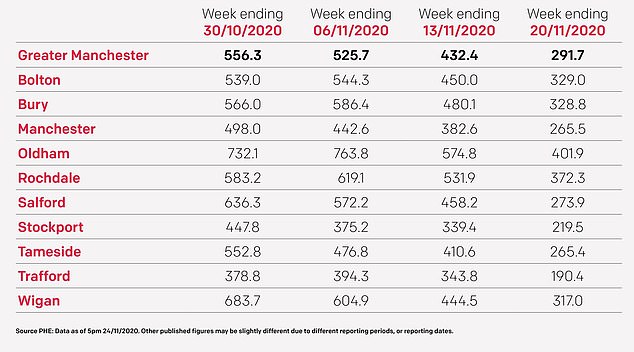 The seven day rate of positive Covid-19 cases per 100,000 population is shown in this slide, which was part of Mr Burnham’s online press conference this morning 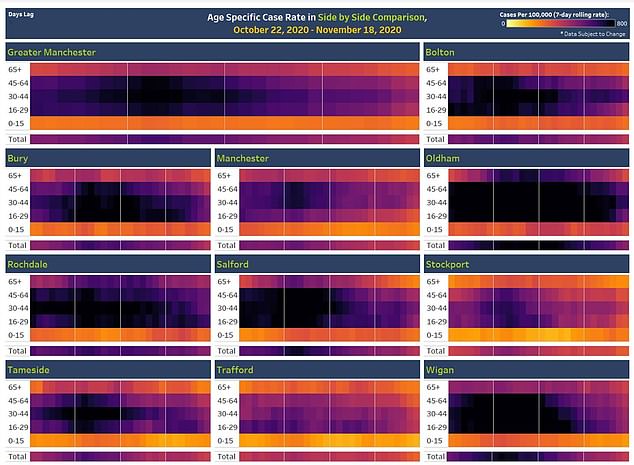 The age-specific case rate in Greater Manchester, shown for the whole region and its sub areas

Speaking on Monday, Mr Burnham said many hospitality businesses would not survive a toughened system of tiered controls in England.

‘I am worried about what I am hearing this morning. It seems that a toughened Tier 3 could be devastating for the hospitality industry and will hit cities and the city economy very, very hard indeed,’ he told the BBC Radio 4 Today programme.

‘They seem to be going too far before Christmas to allow too much over Christmas and that will lead to a huge loss of hospitality businesses, which I would say is too big a price to pay.