Boris Johnson raised fears for his health tonight with a breathless first Downing Street briefing since being discharged from intensive care after battling coronavirus.

The Prime Minister leaned on his lectern with both arms and his opening remarks were punctuated by strained inhalations.

Mr Johnson, who made mention of his breathless month, told the briefing: ‘I want to thank the NHS for getting me back here and a very much happier hospital visit yesterday.’

The Prime Minister, who left hospital just over two weeks ago, had an acute bout of COVID-19 such that he required oxygen and was in intensive care.

How long does it take to recover from coronavirus?

Doctors say it’s unclear how long it takes people to truly recover from COVID-19, however anecdotal evidence suggests it can take months.

Indeed, when the Prime Minister was rushed to intensive care, experts issued grave warnings about how long he would be out of action for.

One medical precept holds that for every week a patient is in intensive care, there will require double that time to fully recover once discharged.

The more serious someone’s illness is, the longer it takes, and those who end up in intensive care may be left with permanent damage to their lungs and liver.

Scientists think it is likely people become immune to the virus in at least the short term, meaning they won’t catch it twice, but they are not certain.

COVID-19 is caused by a virus which mainly attaches to and attacks cells in the lining of the airways and the lungs, which is why sufferers find it so difficult to breathe.

The body’s immune reaction is what causes symptoms – swelling in the areas where the virus is attacking makes the airways close up and make it hard to breathe, and patients cough to try and expel the viruses and dead lung tissue from their bodies.

The immune system also causes a high temperature and aches and pains as it tries to make the body too hostile for it to survive.

And patients become exhausted as the virus makes the lungs unable to get enough oxygen into the blood, depleting muscles’ energy supplies.

While the vast majority of people who catch the coronavirus survive – some with medical help, but many without – the effects of it can linger on for weeks afterwards.

He has, therefore, taken a backseat from his role at the head of Government until this week and returned to No10 on Sunday evening.

However, many coronavirus sufferers require far no longer. Many have reported a crippling shortness of breath and hacking coughs lasting for weeks after leaving hospital.

‘He has experienced a recent, serious respiratory insult with COVID-19, however, so it wouldn’t be too surprising if he still has a degree of reduced respiratory capacity. He may also have had several sleepless nights.’

Mr Johnson has appeared since he left London’s St Thomas’s Hospital in Twitter videos and on the weekend for a speech outside No10.

But this evening’s showing was conspicuously absent of his characteristic ebullience and according to one body language expert, his ‘grim-faced’ delivery was nothing short of ‘shocking.’

Mr Johnson declared that we were ‘past the peak’ of coronavirus and urged that the public ‘keep going’ with lockdown to avoid a fresh outbreak.

Britain today announced another 674 coronavirus deaths and Mr Johnson signalled the restrictions would be in place until June and beyond.

The PM said: ‘It is vital that we do not now lose control and run slap into a second and even bigger mountain.’

Ms James added: ‘Anyone expecting some kind of ‘baby-bounce’ with a new Dad smirk of pride and suppressed delight would have been disappointed.

‘He referred to a “happier hospital visit yesterday” but only with the thinnest of smiles that didn’t reach his eyes. Otherwise he used a mouth clamp to suggest sober resolve.

‘Boris is clearly still a man in recovery from his illness. He folded both arms onto the lectern in front of him and appeared to need to lean on them, and when he spoke the gasping and slightly rasping breaths were audible between his words.

‘There was no show-boating and very little in the way of what sounded or looked like spin. At one point he seemed to pull at the back of his jacket with both hands in what looked like an anxiety ritual.

‘Instead we saw a much more congruent, authentic-looking Boris, a man whose eyes dropped and whose face puckered with grief as he paused over the daily totals of death and a man who was suddenly using his gestures before his words, which is a trait that suggests the words are coming from the heart rather than the script.

‘His “brick-stacking” gestures as he spoke about plans for the next three steps looked shaky but all the more believable for that, and when he raised both hands in a cupping gesture to tell us “we can do it” what he lacked in energy of movement he seemed to make up in a new sense of grim determination that looked utterly genuine.’ 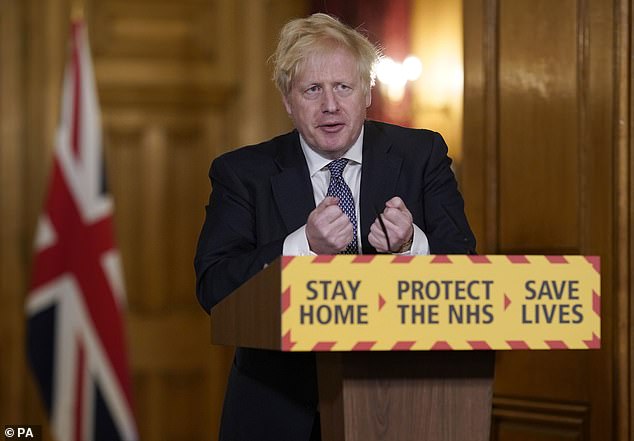