The UK has announced another 55 deaths from Covid-19 today in its early count.

Another 44 people were confirmed to have died in NHS England hospitals, along with six in Wales, three in Scotland and two in Northern Ireland.

A full update will be published by the Department of Health later today.

The early count comes as the average number of daily deaths is rising in the UK after swooping to a low of just seven per day a month ago, with there now a daily average of 40.

But in a shred of hopeful news, data now suggests that the surging numbers of cases which have rattled the nation in recent weeks appear to be slowing down.

Estimates from King’s College London’s Covid Symptom Study suggest that the rise in daily new cases is only 23 per cent higher than last week after it more than doubled in the week before.

And the Government-funded REACT-1 study, carried out by Imperial College London, said there were signs that the R rate has fallen to around 1.1 now, from 1.7 in September, and that cases are now rising less steeply than they were a few weeks ago. 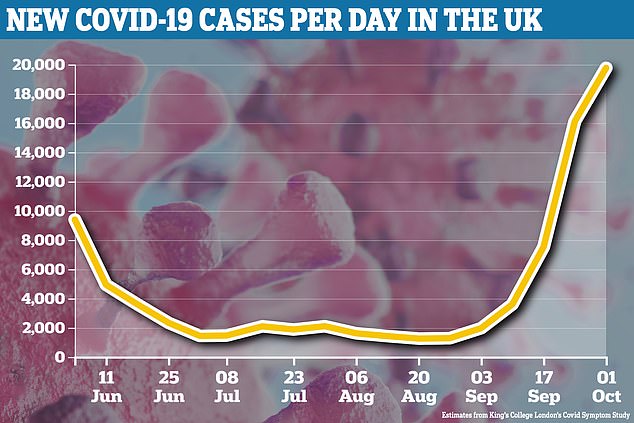 NHS England said the patients who had died in its hospitals were aged between 60 and 99 and succumbed to the virus between September 18 and September 30.

Today’s announcement comes as data is beginning to suggest that the sharp rise in cases seen over recent weeks is starting to slow down.

In a now-rare TV briefing yesterday, Prime Minister Boris Johnson and his top advisers Sir Patrick Vallance and Professor Chris Whitty warned that data is ‘going in the wrong direction’.

The PM dismissed pressure from many Tories to change strategy and focus on protecting jobs, saying he would not ‘throw in the sponge’.

Critics have argued that recent social distancing measures, including local lockdowns and national restrictions such as 10pm curfews on pubs, are ineffective but are laying waste to businesses and infringing civil liberties.

There has been increasing anxiety – including in Cabinet – about following the ultra-cautious approach from Professor Whitty and Sir Patrick. One senior minister told MailOnline that the government was now ‘talking more widely to people with different views’.

While the rate of infection appears to be falling, a stud commissioned by the Department of Health, found that of the volunteers tested between September 18-26, one in 200 people had coronavirus.

It also revealed the virus to be spreading more among young people, while simultaneously laying bare the North-South divide, pointing to the North West as the epicentre of the UK’s outbreak.

Professor Paul Elliott, director of the REACT-1 programme at Imperial from the School of Public Health, said: ‘While our latest findings show some early evidence that the growth of new cases may have slowed, suggesting efforts to control the infection are working, the prevalence of infection is the highest that we have recorded to date.

‘This reinforces the need for protective measures to limit the spread of the disease and the public’s adherence to these, which will be vital to minimise further significant illness and loss of life from Covid-19.’

Extrapolating, the data suggests 411,000 people in England have the virus, meaning over one in 200 people were infected at any one time.

Findings also show that the prevalence of infection was the highest among those aged 18-24 – with one in 100 people infected – while cases increased seven-fold in those aged over 65 from 0.04 per cent to 0.29 per cent compared to the last report.

The North West of England, which has seen areas such as Burnley and Liverpool placed under local restrictions, had the highest levels of infection while the number of infections in London increased five-fold from 0.10 per cent to 0.49 per cent.