Three cases of the Indian Covid variant have been spotted in Leicester, sparking a testing blitz at a school to snuff out any potential cases.

The strain, linked to an explosion in cases in India, has officially been detected 132 times in the UK but experts say there are likely hundreds more.

Leicester’s public health director Professor Ivan Browne said the Indian variant cases were all being investigated, isolated and contact-traced. All the cases were linked to international travel.

Health chiefs have yet to order surge testing in the city because there is no evidence it is spreading in the community. Professor Browne said ‘targeted testing’ was being carried out at a local school ‘as a precautionary measure’.

The school has not been named and it is not known whether the cases of the B.1.617 variant are among pupils or staff members.

Positive tests in a school may rattle health chiefs because it’s likely the infected staff or pupils came into contact with other people.

City council bosses said the travel took place before India was added to Britain’s red list on Friday. Number 10 was heavily criticised for being too slow to make the move to adopt tougher rules.

Leicester — which has repeatedly been a Covid hotspot — has the second biggest Indian community in England, with around 38,000 people making up 28 per cent of the city’s population.

Britain’s cases come as India is in the depth of crisis as a second wave of Covid has left hospitals and morgues overloaded, with infected patients queuing on stretchers in the street and officials burning bodies in public parks.

Top doctors writing in the British Medical Journal today urged the country to halt its upcoming presidential election and go into lockdown immediately to stop the devastating outbreak.

Cases of the Indian Covid variant almost doubled in a week from 77 to 132, official figures showed on Friday 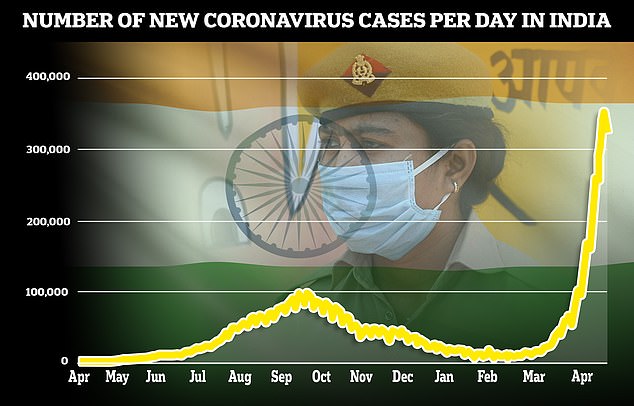 India reported 323,000 Covid cases on Tuesday, slightly less than on Monday though officials warned it was likely down to less testing at the weekend

‘Public Health England notified us on Sunday that it had identified three cases of the variant in Leicester,’ Professor Browne said.

‘PHE has already been in touch with the people concerned and some of their contacts.

‘Since then we have been working closely with PHE to ensure that all close contacts of those affected are identified and advised to self-isolate for 10 days.

‘Targeted testing is also taking place in a city school as a precautionary measure.’

PHE first announced the Indian variant, officially named B.1.617, had been found in the UK earlier this month.

Since then, the number of cases discovered has risen to 132, doubling last week from 77 the week before.

Of the 55 new infections detected by the team looking for different strains around the UK, 39 are believed to have been caught within Britain rather than abroad.

WHAT DO WE KNOW ABOUT THE INDIA VARIANT?

When and where was it discovered? The variant was first reported by the Indian government in late March.

But the first cases appear to date back to October 2020.

It has been detected in 21 countries as of April 19, Public Health England bosses say.

How many people in the UK have been infected with it? Matt Hancock revealed there had been 103 cases so far since it was first spotted on February 22.

But Public Health England’s latest report, published on April 15, says 77. These were detected in England and Scotland.

What mutations does it have? It has 13 mutations that separate it from the original Covid virus that emerged in China — but the two main ones are named E484Q and L452R.

Scientists suspect these two alterations can help it to transmit faster and to get past immune cells made in response to older variants.

Is it more infectious and can it evade vaccines? The L452R mutation is also found on the Californian variant (B.1.429), even though the two evolved independently. It is thought to make the American strain 20 per cent more infectious.

The E484Q mutation is very similar to the one found in the South African and Brazil variants known as E484K, which can help the virus evade antibodies.

The South African variant is thought to make vaccines about 30 per cent less effective at stopping infections, but it’s not clear what effect it has on severe illness.

Professor Sharon Peacock, of PHE, claimed there was ‘limited’ evidence of E484Q’s effect on immunity and vaccines. Lab studies have suggested it may be able to escape some antibodies, but to what degree remains uncertain.

How deadly is it? Scientists still don’t know for sure. But they are fairly certain it won’t be more deadly than the current variants in circulation in Britain.

This is because there is no evolutionary benefit to Covid becoming more deadly. The virus’s sole goal is to spread as much as it can, so it needs people to be alive and mix with others for as long as possible to achieve this.

And, if other variants are anything to go by, the Indian strain should not be more lethal.

There is still no conclusive evidence to show dominant versions like the Kent and South African variants are more deadly than the original Covid strain – even though they are highly transmissible.

Doctors in India claim there has been a sudden spike in Covid admissions among people under 45, who have traditionally been less vulnerable to the disease.

There have been anecdotal reports from medics that young people make up two third of new patients in Delhi. In the southern IT hub of Bangalore, under-40s made up 58 percent of infections in early April, up from 46 percent last year.

There is still no proof younger people are more badly affected by the new strain.

Should we be worried? Scientists are unsure exactly how transmissible or vaccine-resistant the Indian variant is because it hasn’t been studied thoroughly.

The fact it appears to have increased infectivity should not pose an immediate threat to the UK’s situation because the current dominant Kent version appears equally or more transmissible.

It will take a variant far more infectious strain than that to knock it off the top spot.

However, if the Indian version proves to be effective at slipping past vaccine-gained immunity, then its prevalence could rise in Britain as the immunisation programme squashes the Kent variant.

The UK currently classes the Indian strain as a ‘Variant Under Investigation’, a tier below the Kent, South African and Brazilian variants. But there are calls to move it up to the highest category.

Scientists tracking the constantly-evolving virus say it’s still not clear if India’s third wave has been caused by the variant, or if it emerged at the same time by coincidence.

Most of the cases – 119 in total – have been in England, and many of those in London, which has the largest Indian community in the country. Cases are most likely to appear in people returning from the south Asian nation, or their contacts.

So far, India has accounted for the majority of cases of the variant, with others detected in the US, UK, Singapore and Australia.

It is not clear whether the variant is behind the surging outbreak in the country or whether its rise is coincidental with an outbreak that would have happened anyway.

Professor Browne added: ‘There is currently no evidence that this variant causes more severe illness or increased risk of mortality. Our advice to everyone remains the same.

‘The best way to stop the spread of the virus is to keep washing or sanitising your hands, wear a face covering in public places, stay apart from those you don’t live with, and abide by the restrictions in place.

‘Regardless of whether you have travelled recently, everyone is encouraged to take up the offer of twice weekly testing so that we can stop the spread of the virus.’

A UK doctor with family in India has said that the surge in coronavirus cases there will soon create a ‘humanitarian crisis’.

Dr Meenal Viz, a Luton-based doctor, told the PA news agency that the next few weeks could see people ‘dying at numbers we probably have never imagined’.

Dr Viz, 28, described Delhi, where several family members including her aunt, uncle and cousin have been infected with Covid-19, as one of the country’s ‘worst-hit places at the moment’.

‘For a good part of the year, I’ve been trying to stay in touch with my family and especially my elderly grandmother, who hasn’t left the house in a year because she’s so terrified of what could potentially come her way.

‘Last year we had lots of relatives who’ve been unwell with Covid; one of them had to actually get admitted into hospital, but luckily that was at a time where there wasn’t so much of a shortage of oxygen or ICU beds.

‘I knew a year ago that there was going to be a point, whether a variant would come along, or once everyone could travel, that this would actually be quite deadly to the population in terms of the number of ICU beds, number of respirators… it would be catastrophic.’

She added: ‘One of my biggest worries is that it took some time for our leaders to put India on the red list for travel.

‘I’m not sure why exactly that happened, but the worry is that if that comes here, all the hard work that we put in in the last year in lockdown and isolation and getting vaccinated might not be as fruitful as we’d hoped it would be.’

Dr Viz highlighted the need to deliver the vaccine to developing countries and work together to ‘help communities and societies’.

‘I was reading a few days ago that a lot of companies don’t want to sell the patent in developing countries, because of the business side of things, but it’s actually our duty now as doctors and as scientists,’ she told PA.

‘We’re not just here to take care of patients, we’re here to help communities and societies come back from this really tragic year.

‘There’s a damage that can’t be undone. We really need to think of the next few months, and I feel like a lot of leaders have failed to do that.’

Along with several other healthcare workers, Dr Viz works for Team Halo, a UN-backed initiative that has seen doctors and scientists volunteer to make TikTok videos addressing vaccine hesitancy.

Dr Punam Krishan, a Glasgow GP who is also part of the initiative, said: ‘My heart is breaking for what’s happening in India. It feels frighteningly close to home that anything can change at any time.

‘We are so fortunate to have vaccines available.

‘The situation in India highlights just how critical the continued take-up is as the vaccine rollout starts to reach younger generations here.’

The surge in India’s Covid-19 cases was described as ‘beyond heartbreaking’ by Tedros Adhanom Ghebreyesus, director-general of the World Health Organisation (WHO).

Dr Maria van Kerkhove, of the WHO Health Emergencies Programme, warned: ‘This can happen in any country if we let our guard down… The situation can grow if we allow it to and that is why it is important that every single person on the planet knows they have a role to play.’

The UK’s Foreign, Commonwealth and Development Office has said the first of nine plane-loads of life-saving kit, including ventilators and oxygen concentrators, would arrive in New Delhi early on Tuesday, with further consignments due to be dispatched later this week.