The number of people developing Covid in England has dropped to another record low in the last week with just over 750 people now falling ill each day.

Researchers behind the country’s largest symptom tracking study estimate the daily number of people getting sick is down 13 per cent from 870 to 757, after falling five weeks in a row.

Across the whole of the UK, the decline was 10 per cent from 1,165 cases per day to 1,046. Infections have never been lower, even last summer when lockdown rules had been lifted and the virus was in retreat.

Professor Tim Spector, the King’s College London epidemiologist who runs the study, praised the ‘consistent low levels’ of Covid and said: ‘It’s a great position to be in.’

He claimed the findings ‘signal that we’re moving from a Covid pandemic to Covid becoming endemic in the UK’, with the disease becoming manageable.

The positive data, published in a weekly report, add to the continuing huge success of the vaccine rollout, which experts have found is cutting transmission of the virus as well as keeping people out of hospital.

According to the study, the current risk of getting infected with Covid in Britain is one in 45,000 – and just one in 100,000 in vaccinated people.

Vaccines minister Nadhim Zahawi today insisted evidence showed England was on track for a ‘further’ reopening of the economy on May 17 – when pubs and restaurants will reopen for indoor service and foreign travel resumes.

Earlier this week a Government minister suggested that restrictions on funerals could ease as part of a greater unlocking in the next stage of the roadmap. Work and Pensions Secretary Therese Coffey said stringent funeral rules were under ‘careful consideration’. At the moment a maximum of 30 mourners can attend and they have to socially distance.

Mr Zahawi also insisted the country was on track to come out of lockdown as planned on June 21, when all legal limits on social contacts are to be abolished. But critics say life will not fully return to normal because masks, mass testing and Covid passports will likely play a key role in daily life.

Meanwhile Test and Trace figures show infections fell by nine per cent in the week up to April 21, despite 600,000 more swabs being carried out. Out of 5.1million tests in the most recent week, just 16,776 were positive. 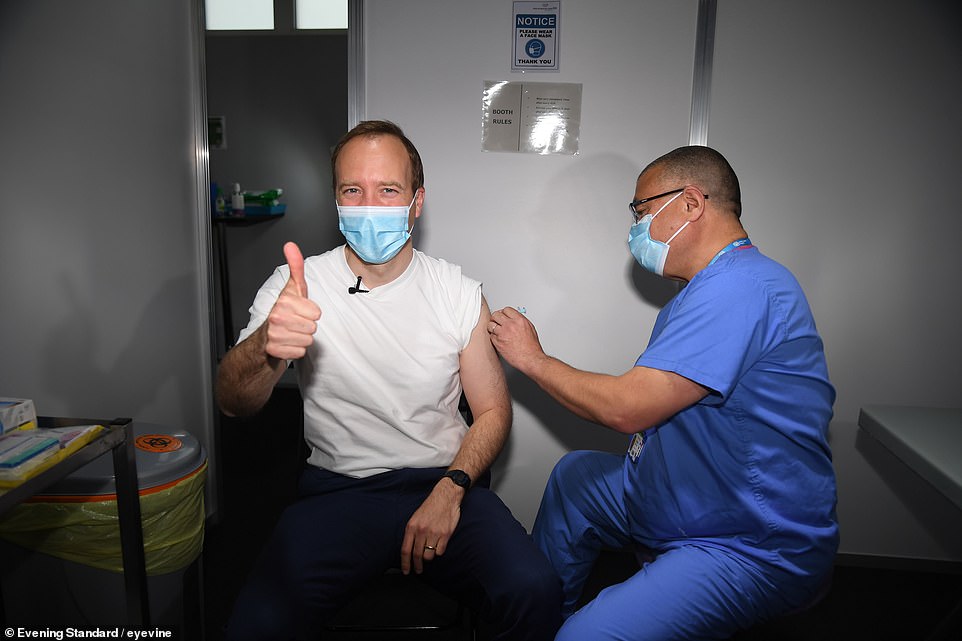 Health Secretary Matt Hancock, 42, receives his coronavirus jab from Jonathan Van-Tam at the Science Museum in central London this morning

The prevalence of the virus has been falling almost constantly since the lockdown was imposed at the start of January, according to the study, with only a slight hitch upwards in March 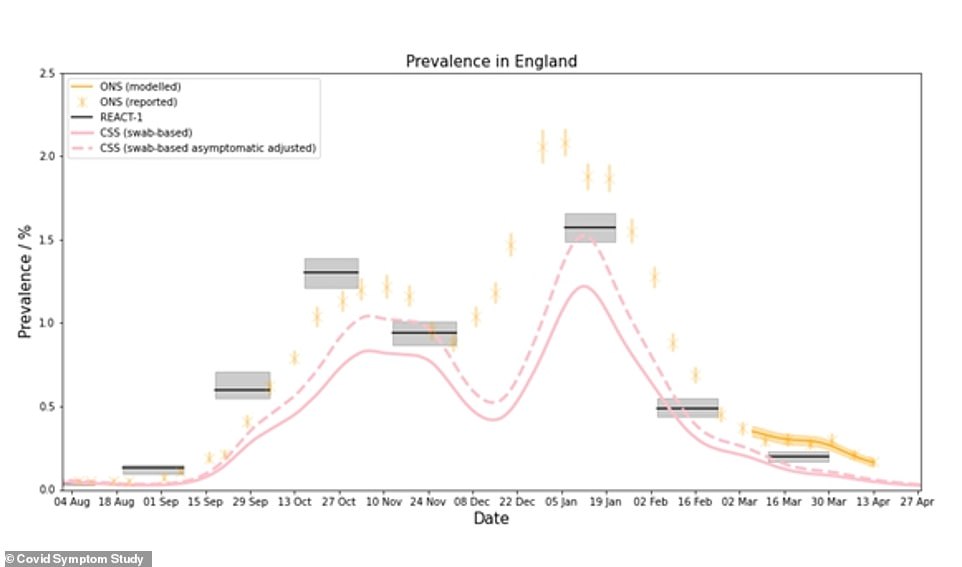 The prevalence of the virus – the total number of people infected – is now thought to be lower even than it was last summer, when there were almost no lockdown rules 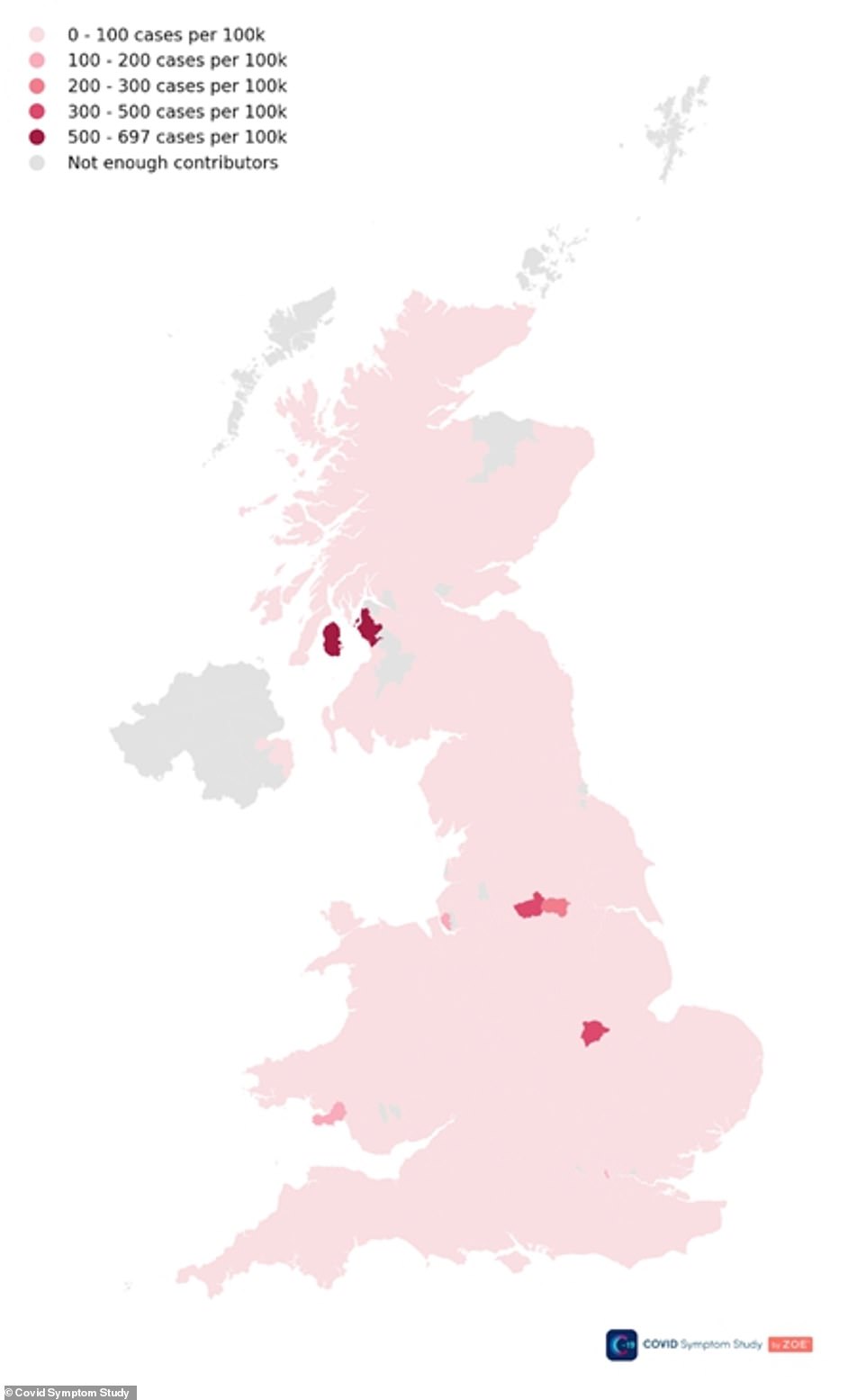 The Covid Symptom Study, which relies on reported symptoms and test results from volunteers, estimates that Covid levels are extremely low all over the country except in a handful of hotspots 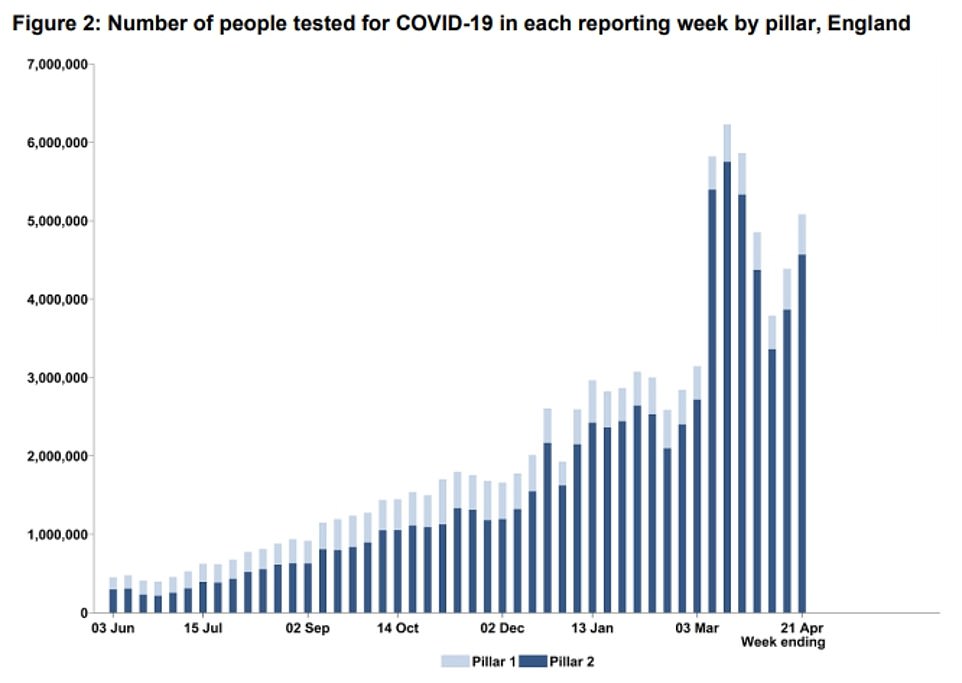 Meanwhile Test and Trace figures show infections fell by nine per cent in the week up to April 21, despite 600,000 more swabs being carried out. Out of 5.1million tests in the most recent week, just 16,776 were positive 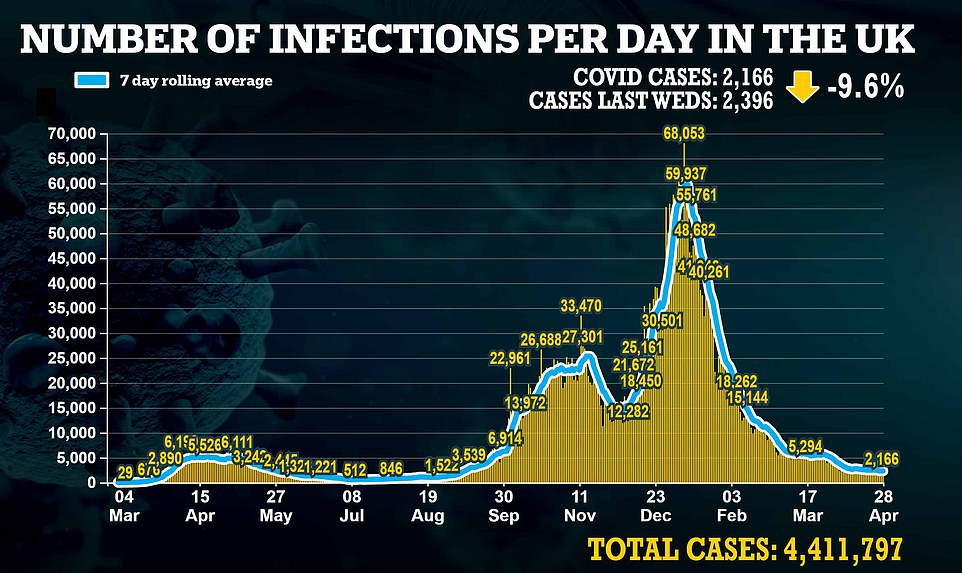 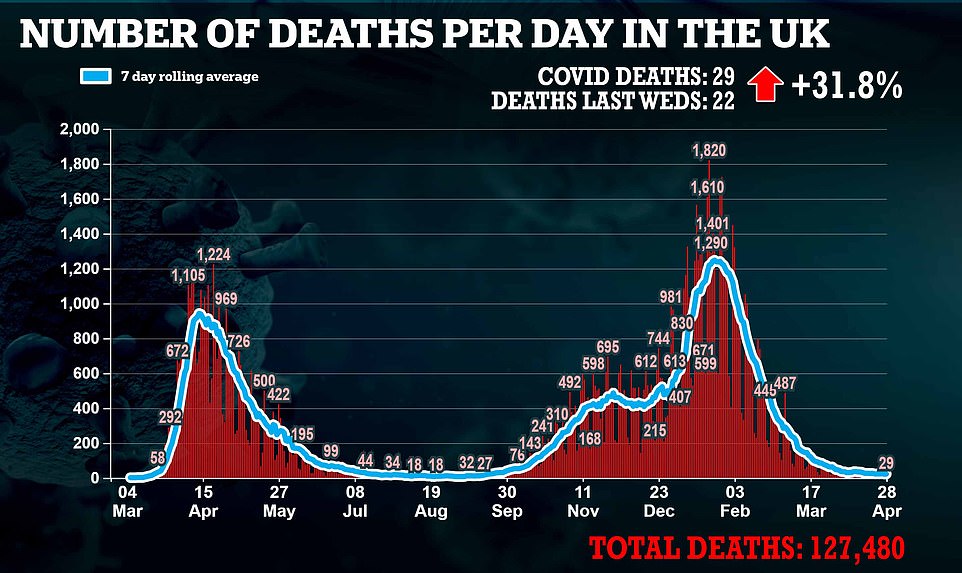 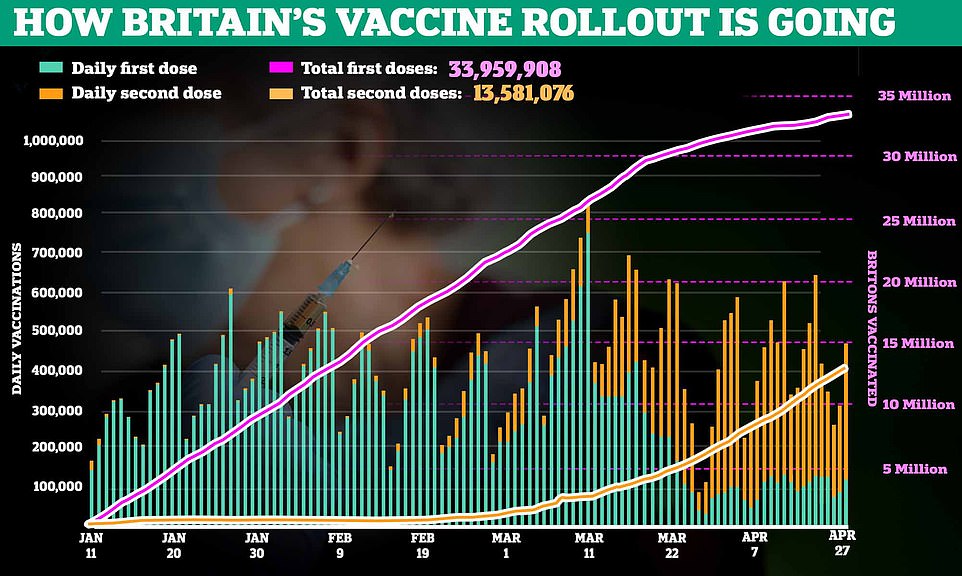 The Covid Symptom Study relies on around one million volunteers reporting their symptoms and test results through a mobile app. But coronavirus cases are now so uncommon that the system is struggling to accurately predict the size of the outbreak.

The fact that vaccines mean fewer and fewer people are susceptible to the disease also means the case rate cannot be directly scaled up to the British population.

‘As a result, we’re assessing our methodology to make sure ZOE continues to produce accurate and reliable Covid data. It’s a great position to be in.

Nearly 70% of adults in now have coronavirus antibodies

About seven in 10 adults in England have coronavirus antibodies, according to official data that suggests the majority of the population now has immunity against the disease.

A major Office for National Statistics (ONS) testing survey today revealed 68.3 per cent of people had the virus-fighting proteins in the week ending April 11, up from 53.1 per cent a fortnight prior.

The results highlight the success of the huge vaccination drive, which on Tuesday saw another 116,328 people given a first dose and 379,265 their second. In total almost 34million Brits have been given at least one injection and 13.5m have been fully immunised.

Antibody levels are likely to be even higher now because millions more have been jabbed since the blood tests were conducted more than a fortnight ago, and it takes about two weeks for immunity to kick in.

Their presence in the blood generally means someone has some at least some protection against the disease and won’t fall ill. But they are not the only part of the immune system.

‘It’s very reassuring that low rates continue despite reopening gyms and outdoor areas in pubs and restaurants, and bodes well for further relaxation of restrictions in line with the government roadmap out of lockdown.’

Other promising data from Test and Trace showed positive tests fell by nine per cent to 16,776 in the seven days to April 21 – despite a surge in testing. For comparison, at the peak of the second wave almost 400,000 cases were being transferred for tracing every week.

Mr Zahawi said there was nothing in the ‘really promising’ data that would threaten Britain’s return to normality.

He told the Today programme this morning: ‘The good news is that vaccinations are working. About 70 per cent of the adult population of England now have antibodies, almost two-thirds have had a single dose, a quarter have had two doses.

‘(There are) lots of really good things, but we have to remain cautious and we will continue to look at the data…But the good news is May 17 looks good, June 21 looks good too.’

He added: ‘If you are now booking, then you do carry some risk, clearly because we have to follow the data.’

It came after Jonathan Van-Tam, England’s deputy chief medical officer, claimed the UK is ‘at or close to the bottom’ of its Covid outbreak’.

He told a Downing Street press conference on Wednesday that he was ‘hopeful’ about Britain getting back to normal in the coming months and said vaccines should mean tough national lockdowns won’t happen again.

Professor Van-Tam compared the situation now to last September’s, before the devastating second wave ignited by the Kent variant, and said: ‘The vaccine has undoubtedly helped… it really is the way out of getting into trouble of the same size and magnitude ever again.’

His comments came on the back of a major Office for National Statistics (ONS) testing survey that revealed nearly seven in 10 adults in Britain now have coronavirus antibodies. It suggests the majority of the population now has some immunity against the disease.

Meanwhile, hopes that restrictions on funerals could ease in weeks were boosted earlier this week as Work and Pensions Secretary Therese Coffeyhinted they could change on May 17.

She said the stringent rules were under ‘careful consideration’ for the next stage of the roadmap out of lockdown after being challenged during an interview on LBC radio over why thousands of football fans can return to stadiums in trial events but funeral mourners are limited to 30.

Miss Coffey said: ‘I know that this particular issue is under careful consideration for the next step of the roadmap, which is due to come in the next few weeks.’

It is not clear which rules could be relaxed, but last week the Mail revealed that grieving families may be able to hug at funerals next month. Government sources said they were ‘hopeful’ that a review would relax social distancing rules within weeks.

At the moment, mourners must stay at least two metres from those outside their household or support bubble. The rules have been branded ‘inhumane’, and MPs, ministers and charities have joined forces to call for an urgent review.