Climate activist Greta Thunberg has said she will stop her regular protest outside Sweden’s parliament because of the surge in COVID-19 infections, and return to only campaigning online.

Sweden, which has shunned lockdowns throughout the pandemic, registered a record 3,254 new coronavirus cases yesterday and seven new deaths.

‘The situation is worsening, so therefore it’s back to #ClimateStrikeOnline for me,’ Thunberg told her roughly 4 million followers on Twitter.

Thunberg has been skipping school on Fridays since August 2018 to stand outside parliament in Stockholm to demand her government take action on climate change.

What started as a lone protest with a hand-painted sign quickly developed into a global phenomenon, mostly due to the attention it gained on social media.

She urged activists to protest online in March as the pandemic started building, but she returned to her place outside parliament in September.

‘Stay safe, take care of each other and #flattenthecurve!’ Thunberg said on Twitter.

Authorities in Sweden are now recommending residents of the capital Stockholm as well as those of two southern regions to limit contacts with people and avoid enclosed spaces as the country registered an official record of 3,254 new cases in one day.

A steady rise in new cases has appeared to be gaining momentum in Sweden in recent weeks though the resurgence of the disease has come later than in wide swaths of Europe and not so far hit the kind of peaks recorded in countries such as France. 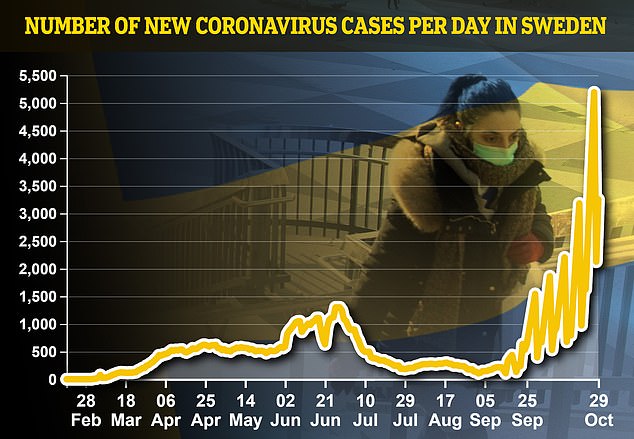 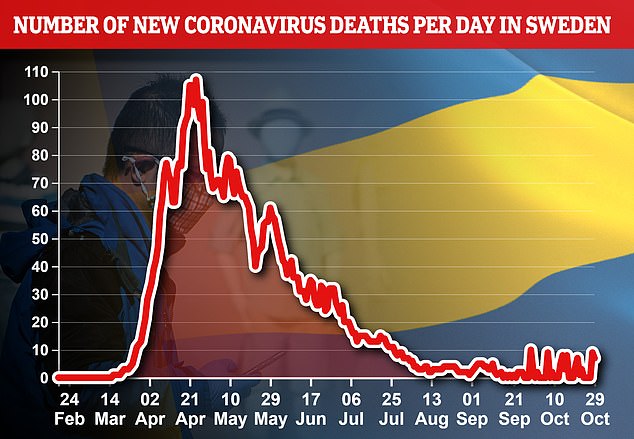 Sweden, which has shunned lockdowns throughout the pandemic, registered a record 3,254 new coronavirus cases yesterday and seven new deaths

‘We’re beginning to approach the ceiling for what the healthcare system can handle. Together, as during the spring, we can push down this curve and avoid the strain on healthcare,’ Chief Epidemiologist Anders Tegnell told a news conference.