German Chancellor Angela Merkel is facing pressure to ease lockdown as the number of new coronavirus cases and deaths in the country continues to fall. 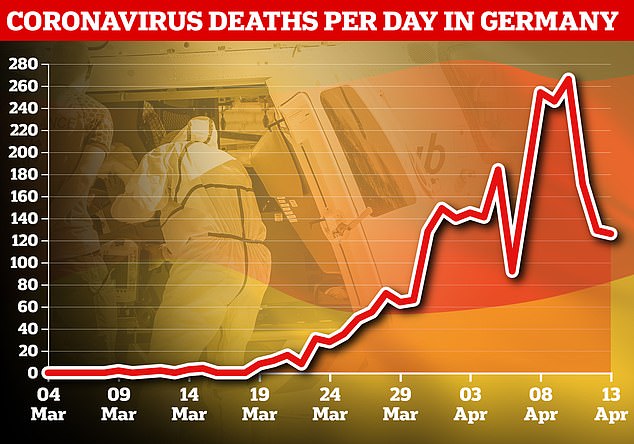 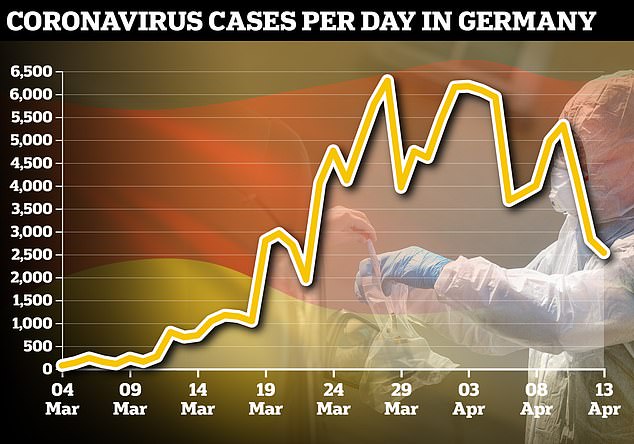 The promising figures follow shocking reports that groups of thugs attacked German police with iron bars and threw stones when the officers tried to disperse them.

The groups were breaking Germany’s strict lockdown rules in Frankfurt on Friday.

One group member broke the window of a police car after throwing a stone at it when an officer got out to ask them to leave. 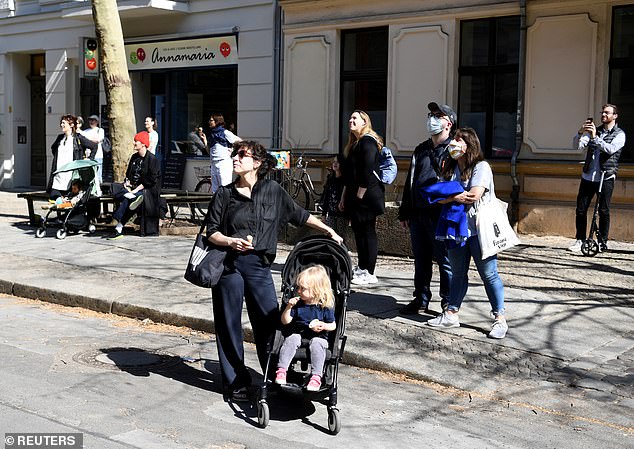 Germany saw 4,133 new cases on Saturday and 2,821 on Sunday with the total number of infected hitting 123,016. Pictured: People gathered in Berlin – some wearing protective face masks – to watch an art installation 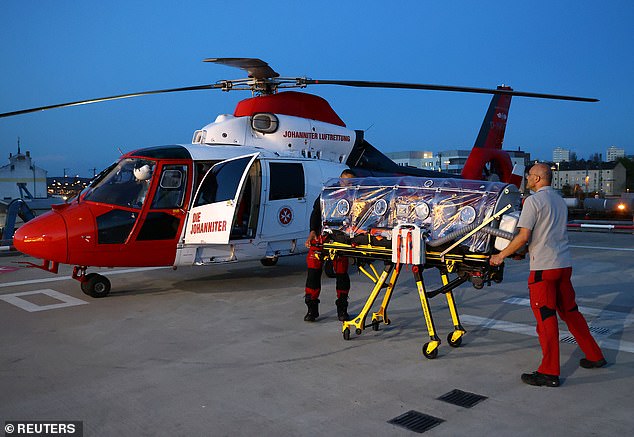 The promising figures follow shocking reports that groups of thugs attacked German police with iron bars and threw stones when the officers tried to disperse them. Pictured: Medics at an air rescue centre in Giessen 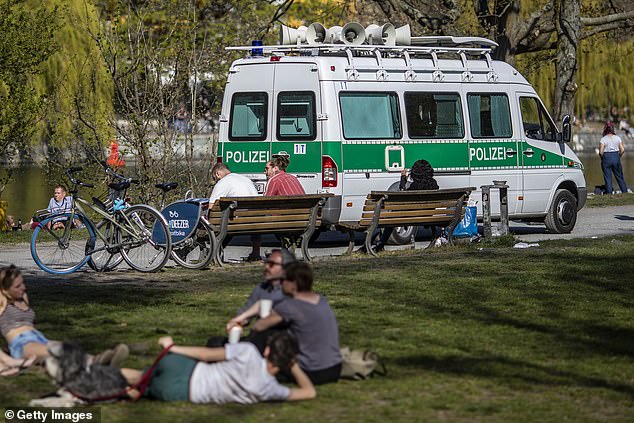 ‘Go back to your corona-ridden country’: French people ‘insulted and spat on’ in German border town

French workers in a German border town have faced abuse from locals who told them to ‘go back to your corona-ridden country’.

The border between Gersheim in Germany and Grand Est in France was shut last month in a bid to slow the spread of coronavirus.

Exceptions to the travel ban were made for goods deliveries and for French commuters with jobs in Germany.

As France’s death toll continues to rise, German residents of the town have been accused of lobbying abuse at those entering the town to work, RT reports.

Some said they had eggs tossed at them. Others were spat on.

Grand Est has more than 2,000 coronavirus deaths while Saarland state – where Gersheim is located – has just over 40.

The French consul in Saarland Catherine Robinet said ‘there is a tense atmosphere in some places near the border’ with even long-standing commuters facing abuse at their places of work.

Speaking to broadcaster ZDF on Sunday evening, Laschet called for ‘a responsible return to normalcy’.

He said that small retailers could potentially reopen following the model in place for bakeries with only two customers at a time.

Other politicians, like Dietmar Woidke, governor of Brandenburg, have called for a more cautious approach to avoid the risk of negating the gains Germany has made in combating the virus.

On Monday, Merkel – and premiers of Germany’s 16 states – expect to get recommendations from the German National Academy of Sciences.

The chancellor said the advice will weigh heavily in considerations for a possible loosening in movement and social distancing rules in place since around mid-March.

Germany has weathered the pandemic better than European neighbours Italy, Spain and France.

But Germany’s export-driven economy – Europe’s largest – has been hit hard and is estimated to contract 9.8 per cent in the second quarter, the biggest decline since records began in 1970 and more than double the decline seen during the global financial crisis in 2009.

Merkel will discuss the recommendations of the science academy with her cabinet on Tuesday.

On Wednesday, she will hold a video conference with the state governors to discuss a possible path out of the lockdown and how to manage the recession it is expected to cause.