EXPRESS INFORMER > News & Politics > Coronavirus: Florida has more infections than all but 8 countries

Coronavirus case numbers continued to spike over the weekend as Florida shattered it’s previous record number of new infections in a single day on Sunday and surpassed all but eight countries worldwide for the greatest number of cases.

More than 15,000 new positive coronavirus tests were reported on Sunday alone in the state, far outstripping the previous record of over 12,000 infections.

Florida reported more than 12,000 new cases on Monday – more than all of Europe combined.

Nearly 60,000 Americans tested positive in total on Sunday, although the daily death toll remained low, at 428, according to tracking by Johns Hopkins University. Both in hotspots like Florida, and nationwide, fatalities have turned slightly upward, but remain low as experts warn the spike in deaths may be yet to come.

The sharp rise in cases in Florida comes as the state presses on with its reopening plan, including opening the gates to Disney World, which allowed tourists in for the first time in months over the weekend.

Last week, the state hit a new high death toll, but its daily fatalities remain far lower than the numbers seen in New York when it was the pandemic’s epicenter.

Despite that somewhat encouraging shift, the US remains the worst-hit country in the world, with more than 3.3 million coronavirus cases and more than 135,000 deaths. 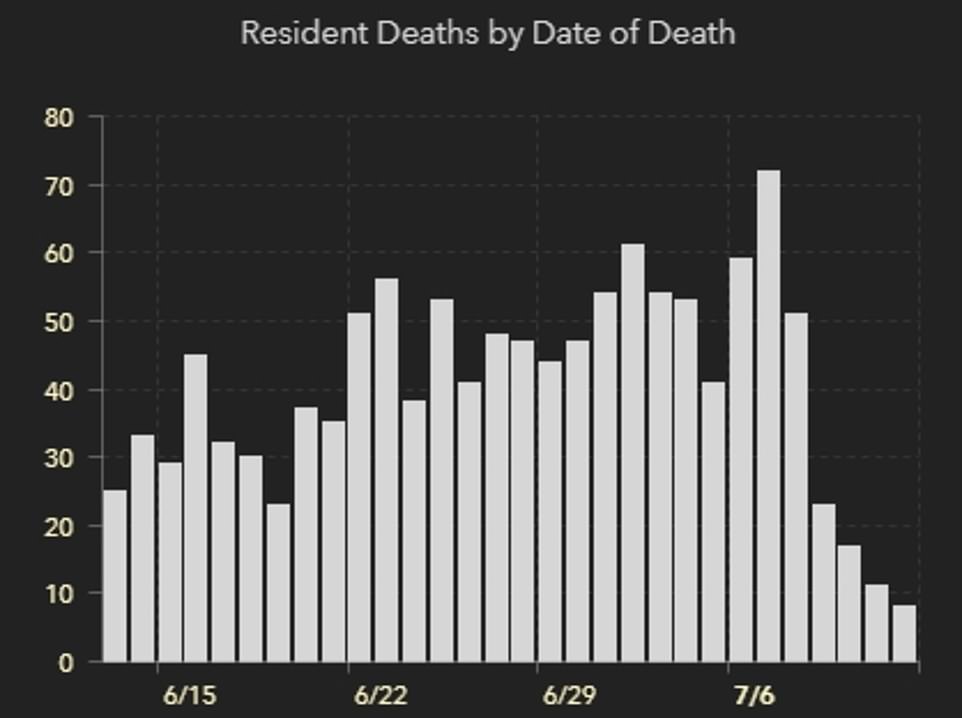 Despite the steep rise in coronavirus cases in Florida, the number of daily deaths has continued to decline f

While newly diagnosed cases remain high in previous hotspots like Arizona and Texas, Florida is now indisputably the most concerning state in the nation.

In Texas, where several counties saw their hospitals overwhelmed by coronavirus cases had fewer than 8,800 new cases diagnosed Sunday, compared to Florida’s 15,300.

Similar patterns to those seen in Texas are emerging in Florida. Hospitals in Miami-Dade County are now approaching capacity as coronavirus threatens to flood the healthcare system.

Stockpiles of remdesivir, the only antiviral drug shown to help coronavirus patients recover more quickly, are dwindling in Florida, leaving some hospitals in the state with no effective treatments for their patients. 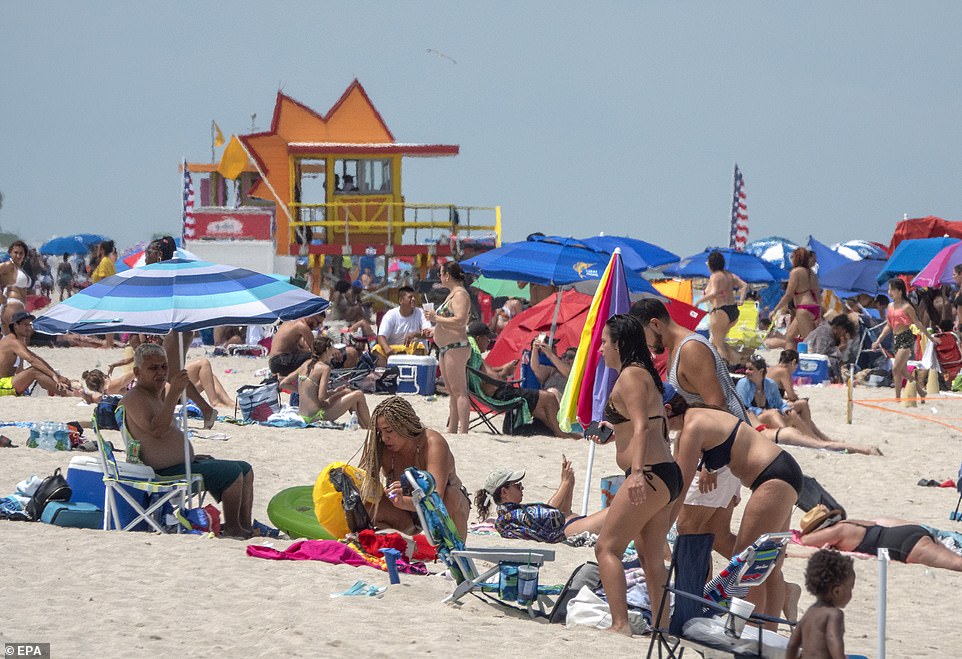 Despite the record-breaking rise in coronavirus cases, Florida beaches were crowded last weekend, with few masks in sight 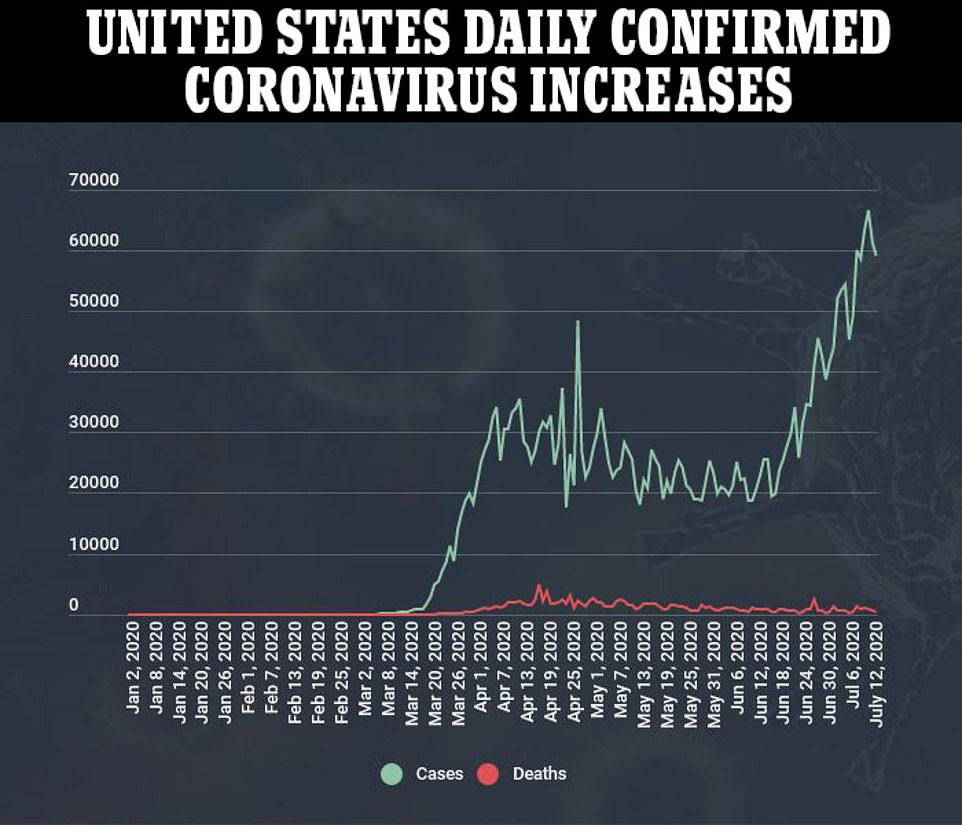 Last week, New York Governor Andrew Cuomo offered to send one day’s worth of the medication to Florida.

The small shipment was enough to treat 280 patients and act as a stopgap for Florida on Saturday, while the state was awaiting the delivery of remdesivir from the federal government.

Florida Governor Rick DeSantis said that he had personally secured the new supply of the antiviral from President Trump, after vehemently denying that the state needed assistance from New York.

But doctors there tell a different story.

So far, nearly 4,300 Floridians have died of coronavirus, and its fatality rate has hovered just below 20 per 100,000 residents. 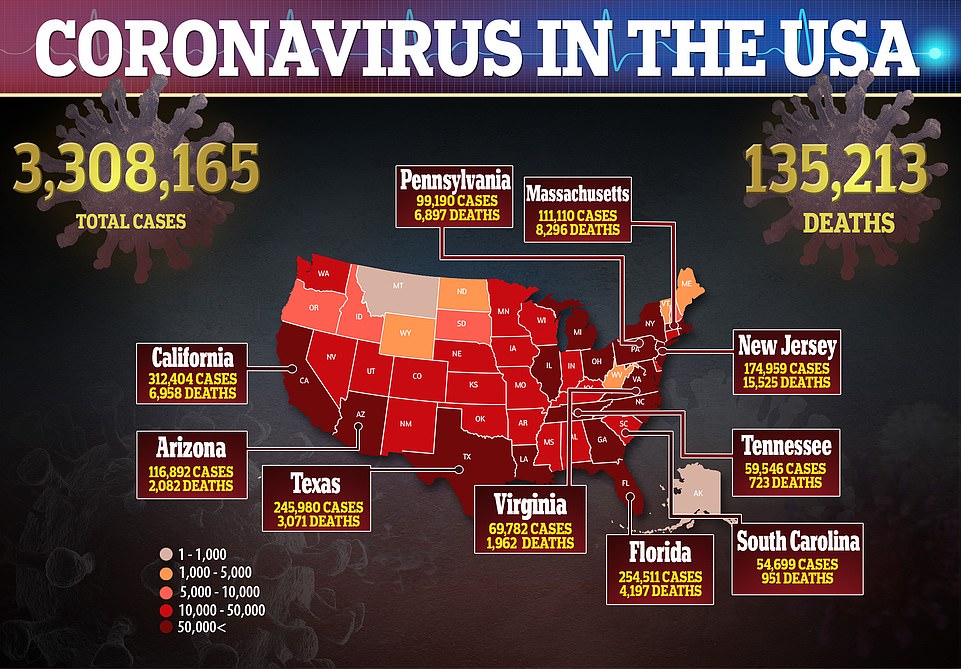 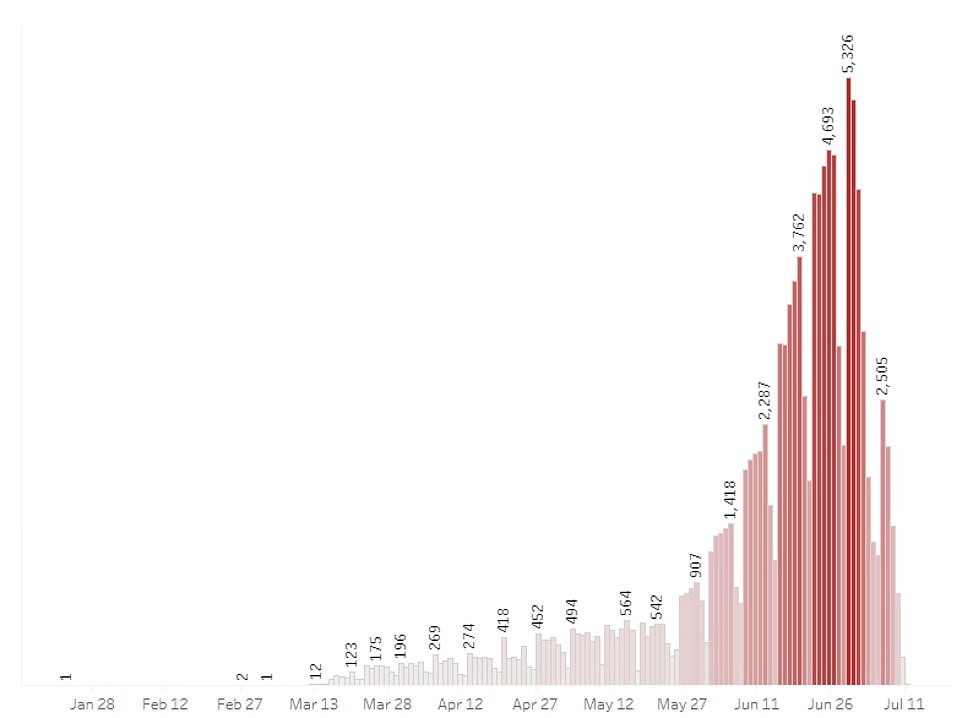 That’s below the rate seen in Arizona, where about 30 people per 100,000 residents have died of the virus.

Massachusetts’s outbreak has been relatively under control, with less than 300 new cases diagnosed each day for all of July, but its fatality rate soared much higher than either Florida’s or Arizona’s, with 120 people dying per 10,000.

In part, the diverging patterns in cases and deaths – the steep rise in cases, but stable, relatively low number of deaths – across the nation and in many states reflects the massive ramp up of testing.

Idaho still has a low number of infections, but saw more than 400 new positive tests on Sunday. It has surpassed its previous peak of hospitalizations as well

Florida is now testing several times more people for coronavirus each day than New York was at the height of its crisis.

But experts warn that an uptick in fatalities may be yet to come, both in individual states like Florida and across the US.

Estimates of lag times vary, but many experts have warned that mid-July could bring a rise in fatalities.

Modelers have projected that by that same time, Florida may be seeing as many as 20,000 new cases a day.

Emerging hotspots are also being closely watched as well.

Louisiana has now surpassed its first case peak. On Sunday, more than 2,000 people there tested positive.

North Carolina, too, is facing a growing crisis. It too saw more than 2,000 new cases on Sunday, and doctors are concerned that remdesivir may run out there too. 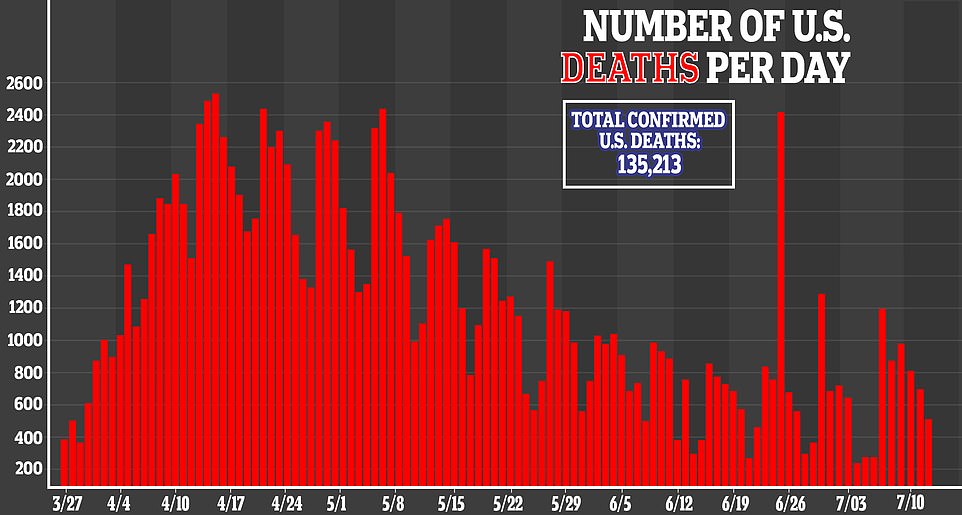 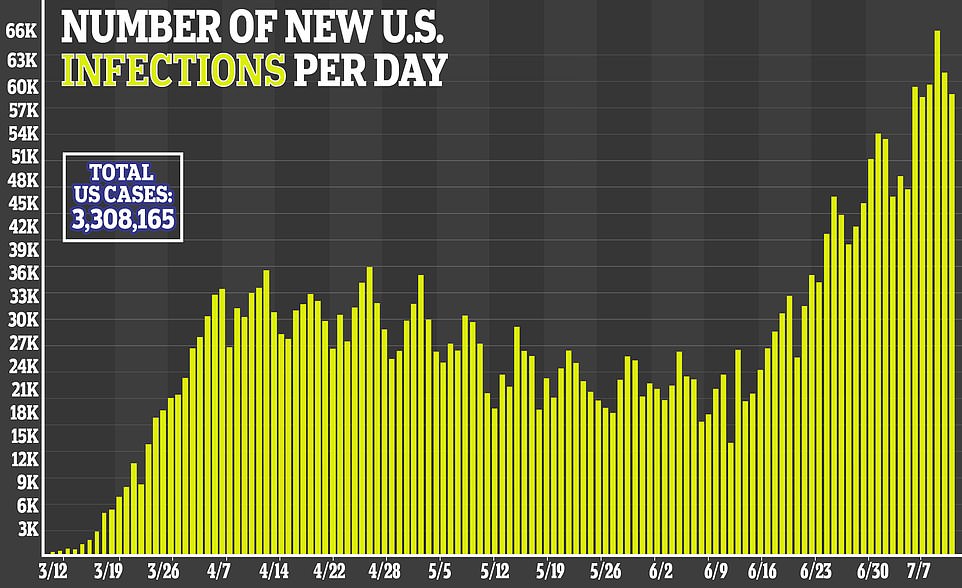