The number of people dying of coronavirus rose in Wales during the first week of July for the first time since April, official statistics today revealed.

Thirty people died with Covid-19 in the seven-day spell between June 27 to July 3, according to Office for National Statistics (ONS) data — up from 26 a week earlier.

But the government data also showed the number of confirmed or suspected coronavirus deaths has continued to fall in every region of England, suggesting the outbreak may still be slowing down.

Other promising figures showed the number of people dying of all causes has now been below average for three weeks in England and Wales and just 381 deaths were recorded in that week — the fewest since mid-March.

Hospital and care home deaths are still lower than would normally be expected at this time of year — but deaths in people’s own homes remain higher, by 755 in the first week of July.

And the number of Covid-19 deaths registered each week — by when they were counted as opposed to when they actually happened — has also fallen to its lowest level for 15 weeks. 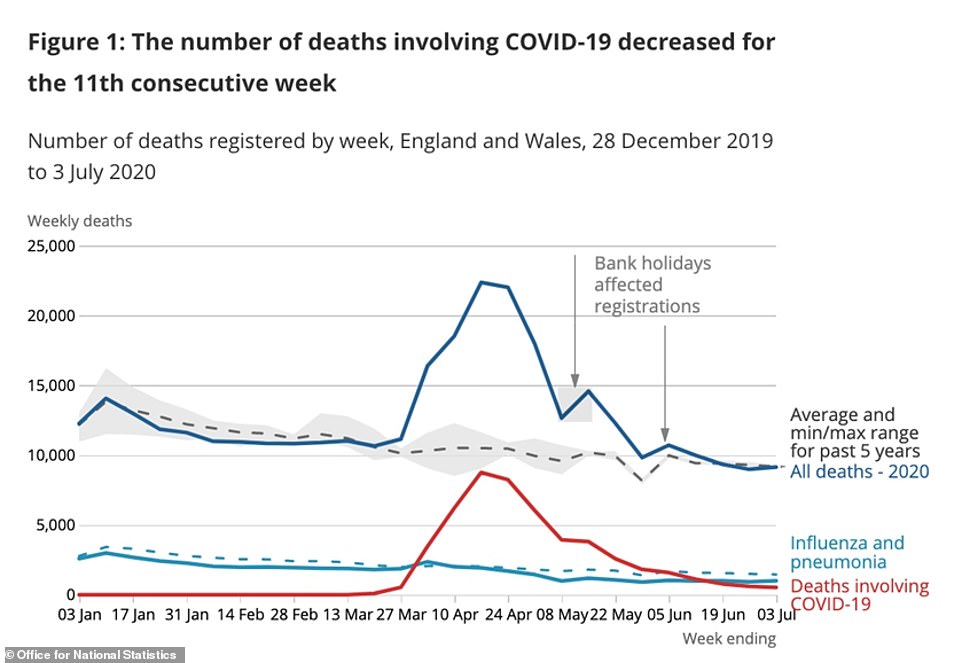 WEEKLY CHANGES IN DEATHS IN ENGLAND AND WALES

According to the data from the ONS, the number of deaths registered in England and Wales involving Covid-19 in the week ending July 3 — known as week 27 — was 532.

The report said: ‘The number of death registrations involving the coronavirus (Covid-19) decreased from 606 in Week 26 to 532 in Week 27, the lowest number of Covid-19 deaths registered since Week 12, week ending March 20, when 103 deaths involved Covid-19.

The number of deaths happening each week has also fallen to the lowest level for 16 weeks. This takes into account when the people actually died and not when their death was registered by officials, which makes it more accurate.

ONS data revealed a total 381 deaths actually happened during the most recent seven-day spell, down from 561 the week before.

One month ago, in the week to June 5, there were 1,289 deaths recorded. And during the height of the crisis, more than 8,000 people were dying every week.

The statistics confirm that the Covid-19 outbreak in England and Wales is dramatically smaller than it was only five weeks ago.

During that time lockdown rules have been lifted and testing surveys suggest that the speed at which the epidemic is shrinking has plateaued, according to several different sets of data.

Millions flocked to pubs to celebrate ‘Super Saturday’ last weekend to celebrate the easing of the draconian measures — despite warnings from top scientists that it would cause another spike in cases.

Government figures yesterday suggested that Britain’s coronavirus outbreak may be getting worse after the average number of new cases jumped six per cent in the first week-on-week rise since early May. 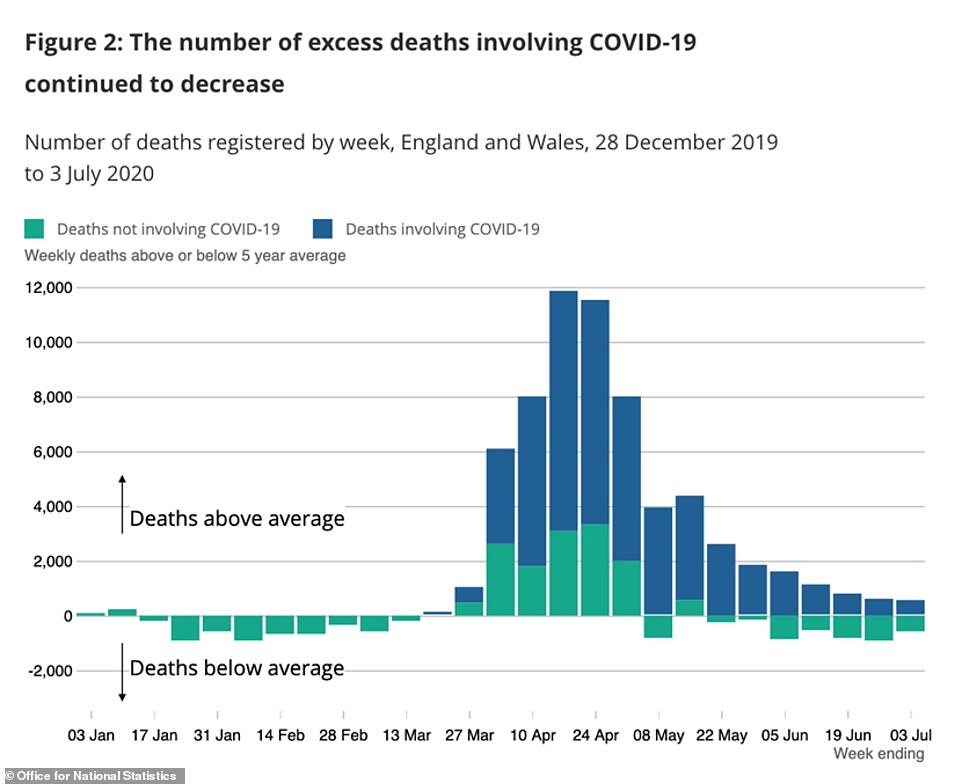 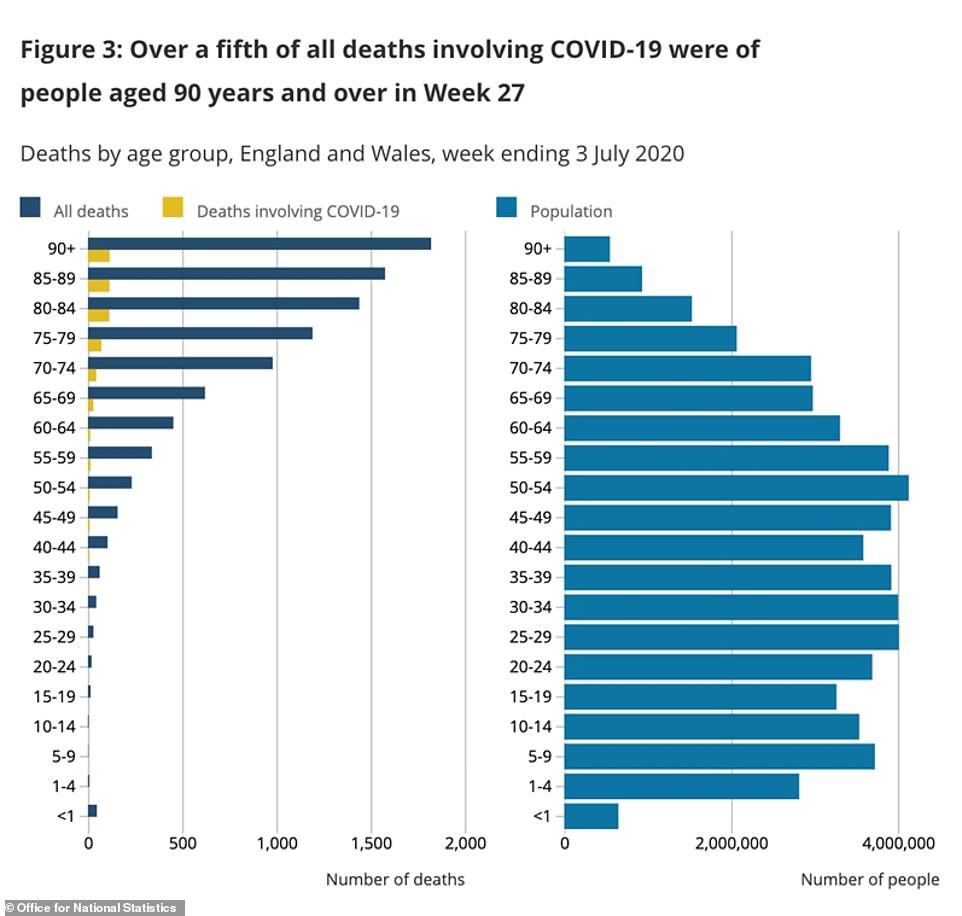 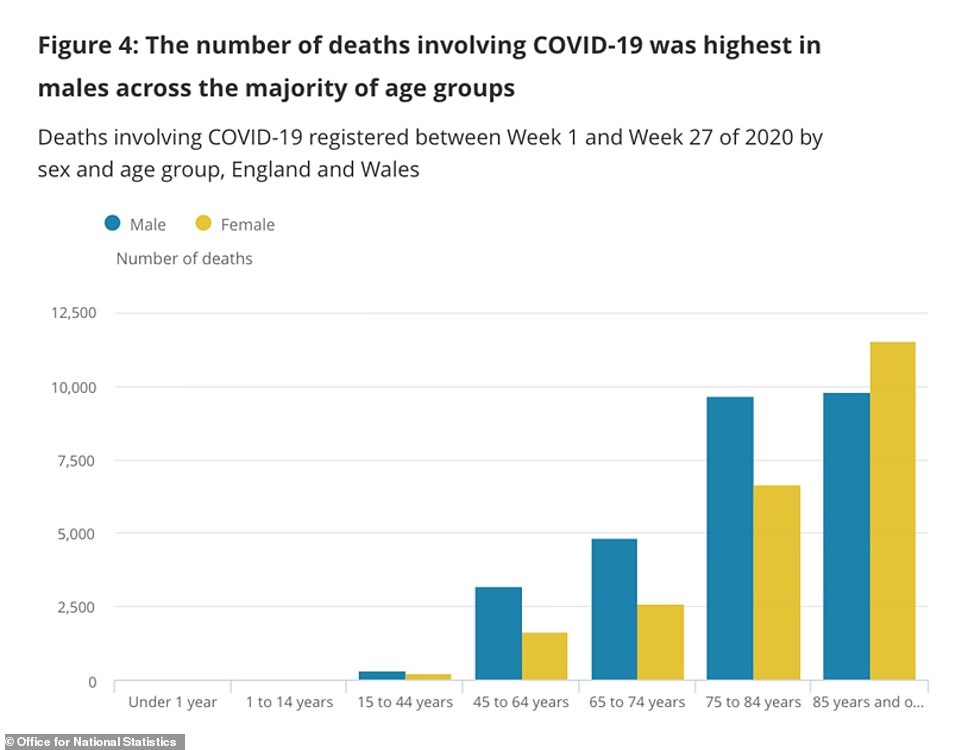 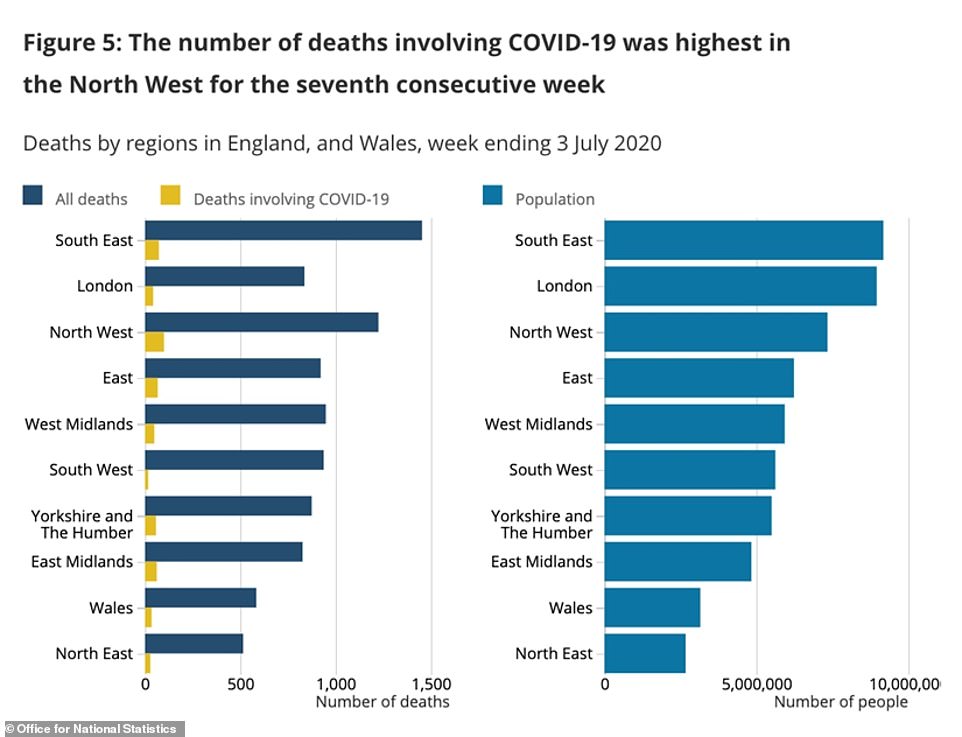 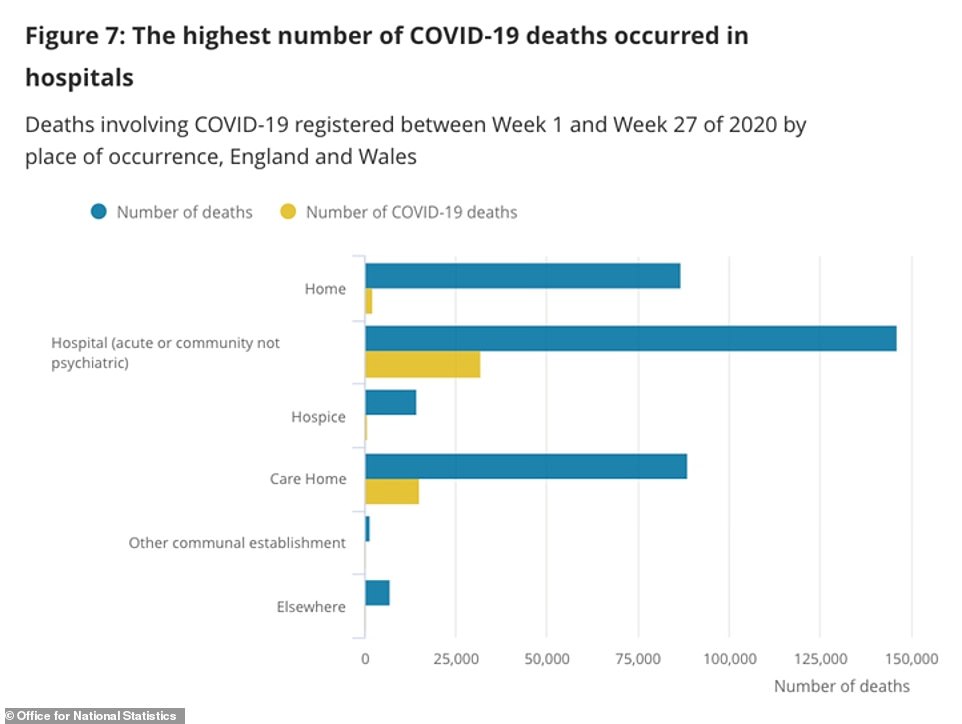 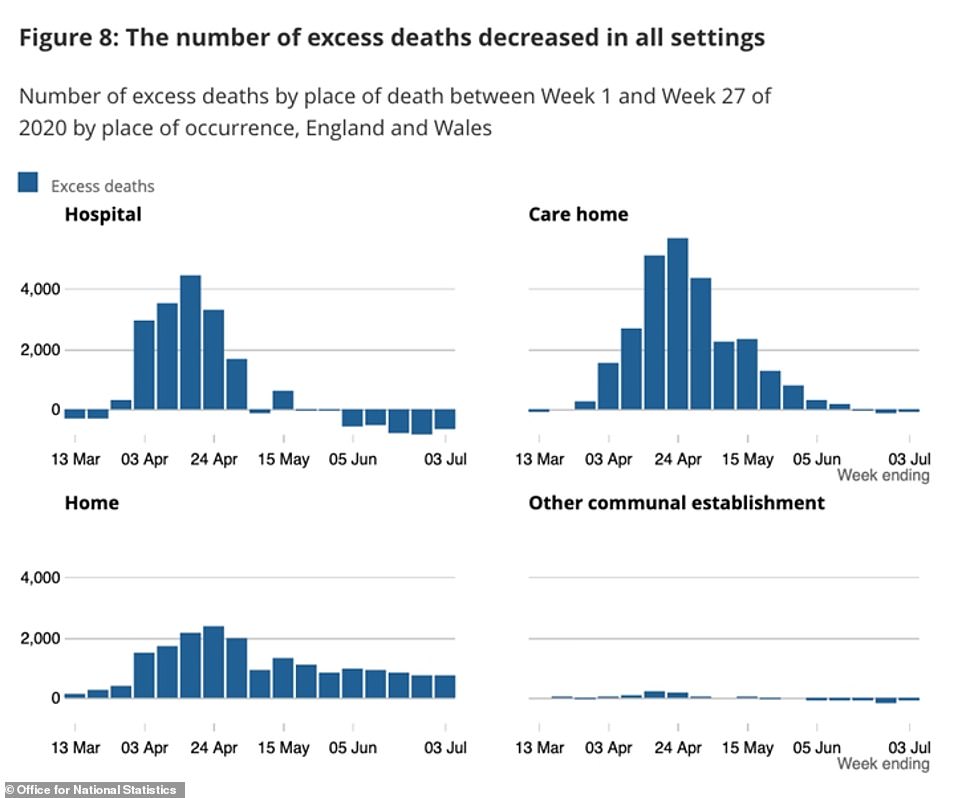 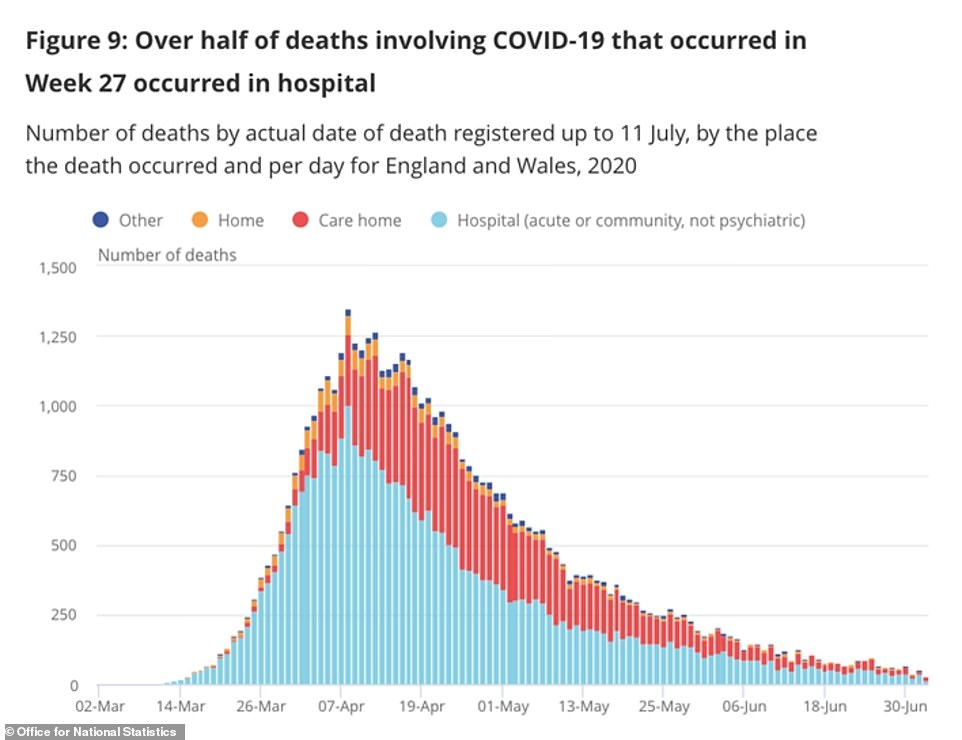 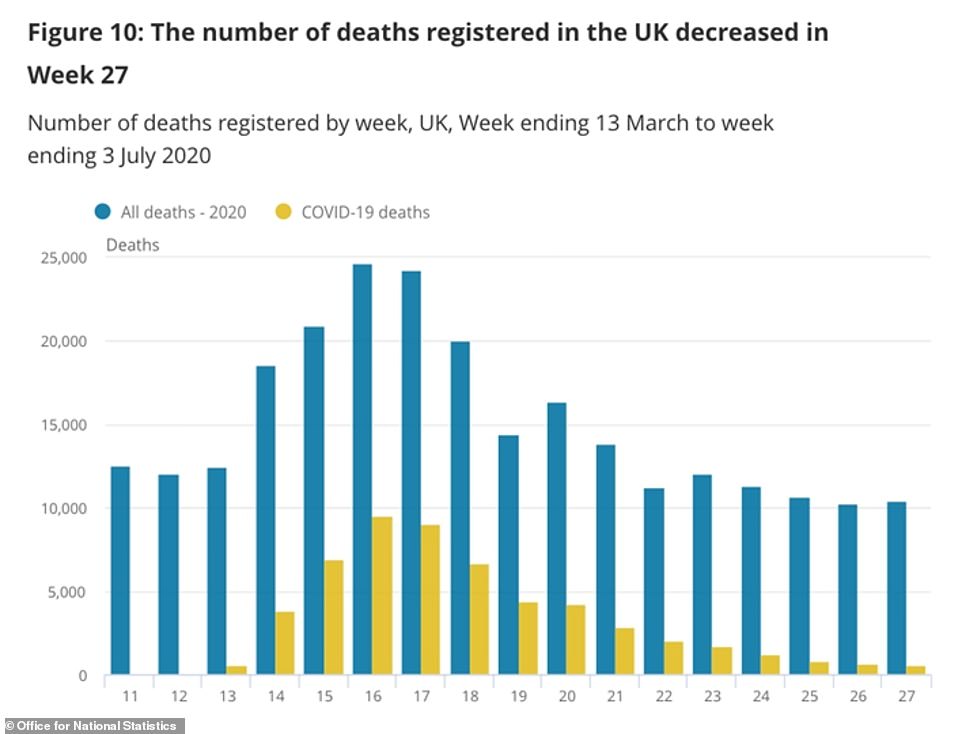 BRITAIN’S COVID-19 OUTBREAK MAY BE GETTING WORSE, DATA SHOWS

Britain’s coronavirus outbreak may be getting worse as alarming government figures yesterday revealed the average number of new cases has jumped six per cent in the first week-on-week rise since early May — but the daily death toll has dipped to a 17-week low.

Department of Health data showed 530 more Britons tested positive for the life-threatening disease, meaning the rolling average of daily infections had increased for the third day in a row to 624 — up from 590 last Monday, which was 34 per cent lower than the same day the week before.

The last time the UK suffered an increase in its average number of daily cases was on May 7, when 5,600 Britons were diagnosed with Covid-19 and the spike was blamed on more people being swabbed for the infection after officials finally ramped up the mass-testing scheme.

The data a little more than a week after Britain took the first steps back to normal life, after Number 10 finally relaxed strict lockdown rules in a desperate bid to kick-start the economy. Millions flocked to pubs to celebrate ‘Super Saturday’ — despite warnings from top scientists that it would cause another spike in cases. 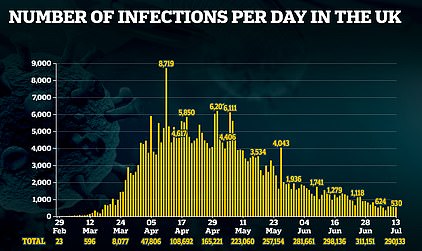 Department of Health data shows 530 more Britons have tested positive for the life-threatening disease, meaning the rolling average of daily infections has increased for the third day in a row to 624 — up from 590 last Monday, which was 34 per cent lower than the same day the week before.

The last time the UK suffered an increase in its average number of daily cases was on May 7, when 5,600 Britons were diagnosed with Covid-19 and the spike was blamed on more people being swabbed for the infection after officials finally ramped up the mass-testing scheme.

Today’s ONS report also confirmed that at least 50,698 people had died of suspected or confirmed Covid-19 in England and Wales by July 3.

The National Records of Scotland (NRS) recorded 4,173 deaths by July 5, while the Northern Ireland Statistics and Research Agency (NISRA) added 835.

This means at least 55,706 people in the UK had died of coronavirus 10 days ago — a number that is significantly higher than the government’s official tally.

The Department of Health has so far only counted 44,830 of those because it has missed off thousands who were never able to get tested.

Today’s data comes after a release last week confirmed that England’s coronavirus outbreak is still shrinking and the number of new cases each day had more than halved in a week.

An ONS testing scheme estimated 1,700 people are getting infected with Covid-19 each day outside of hospitals and care homes — down from 3,500 a week earlier.

Separate figures, from King’s College London, suggest the outbreak in England has stopped shrinking — but its estimate is lower than the ONS’s at around 1,200 new cases per day.

Department of Health chiefs have announced an average of just 624 new positive test results per day for the past week — but up to half of infected patients are thought to never show symptoms.

A report by Public Health England and the University of Cambridge predicted last Monday that the true number of daily cases is more like 5,300 but could even be as high as 7,600. 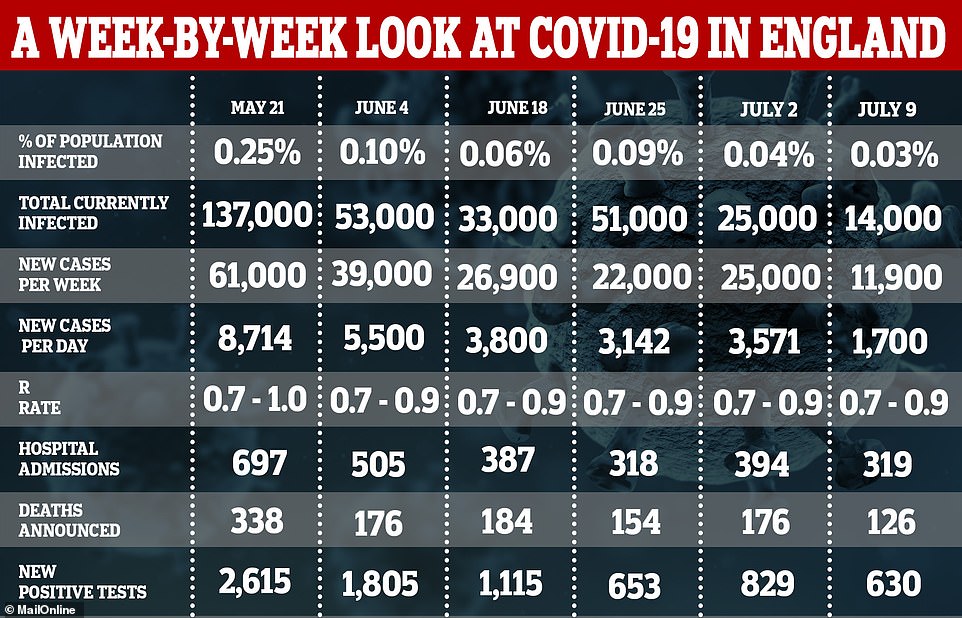 Department of Health’s latest death count for all settings stands at 44,830.

It also only takes into account patients who tested positive for the virus, as opposed to deaths suspected to be down to the coronavirus. Many people were not tested early on in the outbreak, meaning thousands are suspected to be missing from the total.

Data compiled by the statistical bodies of each of the home nations show 55,706 people died of either confirmed or suspected Covid-19 across the UK by the end of May.

The Office for National Statistics confirmed that 50,698 people in England and Wales died with confirmed or suspected Covid-19 by July 3.

National Records Scotland — which collects statistics north of the border — said 4,173 people had died across the country by July 5.

Excess deaths are considered to be an accurate measure of the number of people killed by the pandemic because they include a broader spectrum of victims. As well as including people who may have died with Covid-19 without ever being tested, the data also shows how many more people died because their medical treatment was postponed, for example, or who didn’t or couldn’t get to hospital when they were seriously ill.