Coronavirus accounted for one in every 10 deaths in England and Wales in mid-October, official figures show.

The increase in coronavirus-related deaths marked the seventh week in a row that the number had increased after it dropped below 100 per week for a brief period during the summer.

And data shows the number of people who died in care homes, where residents are among the most vulnerable to Covid-19, doubled in the fortnight up to October 23. ONS data showed that a total of 211 care home residents died with the disease in the most recent week, compared to 105 deaths in the week to October 9.

Care homes faced devastation in the first wave of coronavirus when more than 10,000 residents were killed by the virus, which preys on the elderly. Testing was too scarce to stop the disease and scientists found residents tended not to show typical symptoms as often.

Campaign groups have urged the Health Secretary not to suspend care home visits during the second lockdown for fear isolation deteriorates residents’ health further. But the fact the virus appears to be resurging in the sector will likely make ministers more hesitant to green-light the move.

Meanwhile, there are still hundreds of excess deaths happening in England and Wales every week, which experts presume to be a knock-on consequence of the pandemic. In the most recent week there were 980 more fatalities than usual for the time of year.

The ONS report claimed the majority were deaths that occurred in people’s houses. Shutting down NHS services and delaying treatments during the first lockdown is still having deadly effects on the nation’s health. It raises fears about the consequences of another lockdown, when the country and the health service still hasn’t recovered from the first. 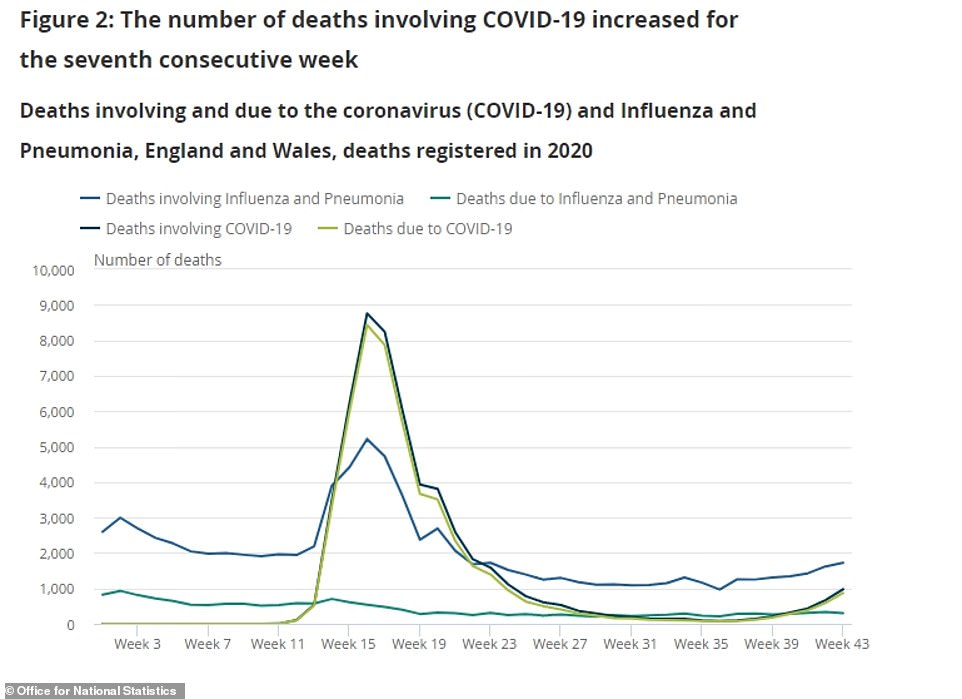 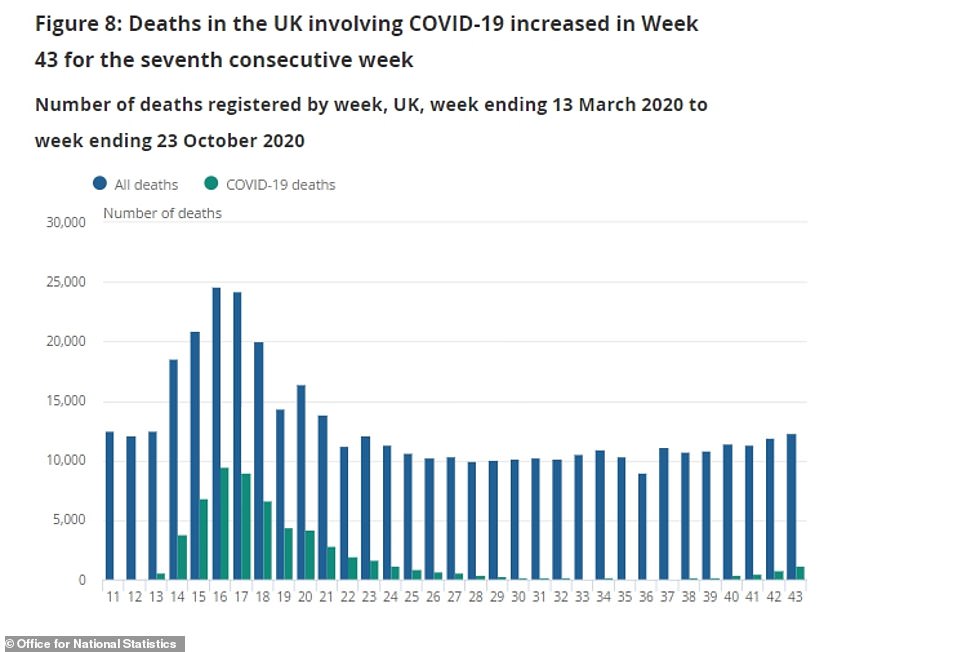 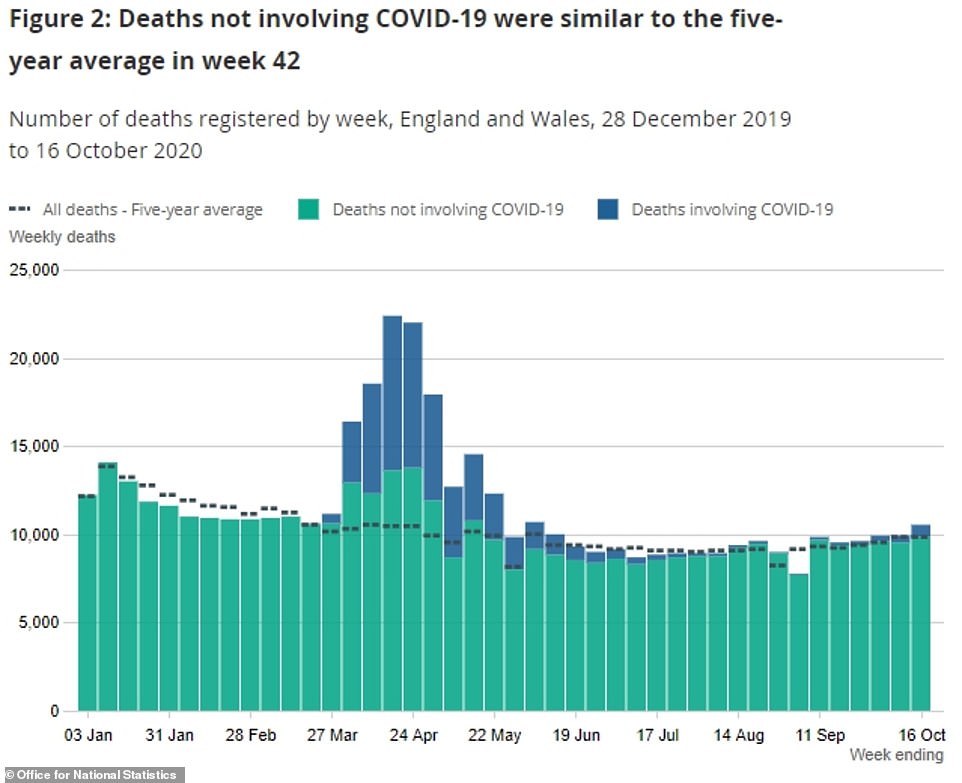 The ONS’ most recent weekly report found the number of weekly deaths involving coronavirus was at its highest since early June.

A total of 978 deaths registered in England and Wales in the week ending October 23 mentioned Covid-19 on the death certificate. This compares to 1,719 caused by flu or pneumonia.

QUESTIONS OVER PREDICTION OF 4,000 DEATHS PER DAY

The claim that 4,000 people could be dying from coronavirus by next month could be four or five times too high and not reflect the current situation, experts warn.

But there are concerns that it’s out of date and inaccurate, with SAGE accused of ‘misleading’ the public and MPs by cherry-picking the scariest data.

Professor Carl Heneghan, of the Centre for Evidence-Based Medicine at the University of Oxford, said he ‘cannot understand why they have used this data’.

The forecast could be four or five times too high, he said, because it is based on there being an average 1,000 deaths per day in the UK right now. In reality the daily average was 182 per day October 22 and 28, according to Department of Health data.

The number, which appeared as the worst case on a graph with three other possible scenarios, was created by statisticians at the University of Cambridge and Public Health England who have since revised their numbers and lowered the possible numbers of deaths. The team’s forecasts are not published online, like some of their other work, but are sent directly to SPI-M, a sub-group of SAGE, to do with it what they choose.

A potential 4,000 fatalities per day if there are no changes to restrictions was almost twice as high as the second worst case, which put them at a touch higher than 2,000 per day.

The lowest estimates in the no-action scenario estimated deaths at just below 2,000 per day, and all were higher than the peak in the first wave, when the most deaths were recorded on April 8 (1,073).

It is the highest number of deaths involving Covid-19 since the week ending June 12, and is up from 670 deaths in the week to October 16 – a jump of 46 per cent.

Overall, the ONS found total deaths were 10 per cent above what they normally see at this time of year, the equivalent of 980 deaths.

The number of deaths in hospitals was above the five-year average in the week ending October 23 with 14 more deaths.

This is the first time this has happened since the week ending May 15 (614 more), when the country was in the midst of its first Covid-19 crisis .

The numbers of deaths in private homes and care homes also were above the five-year average at 959 and 39 more deaths respectively.

Deaths in private homes have been above average since March, which experts say is because people are still hesitant to use the NHS, either because they fear catching Covid-19 or do not want to burden the health service.

It highlights the catastrophic impact of the pandemic on the nation’s general health.

There were 27million fewer GP appointments than normal during the first shutdown, raising fears it led to the worsening of other conditions.

Tens of thousands less people than average went for cancer checks during that time and there were hundreds more deaths from heart attacks.

The finding raises fears about the consequences of the second lockdown on the nation’s health.

‘We have seen an overall increase of deaths as well as a redistribution of various causes of death. For instance, while deaths of heart disease are below average in hospital, it has been above average at home.

‘It’s a similar picture when looking at prostate cancer for males and dementia and Alzheimer’s disease for females. Unlike the high numbers of deaths involving Covid-19 in hospitals and care homes, the majority of deaths in private homes are unrelated to Covid-19.’

The ONS said the South West was the only English region to have fewer overall deaths compared with the five-year average.

Overall, there were 913 deaths involving Covid-19 in England in the week ending October 23. 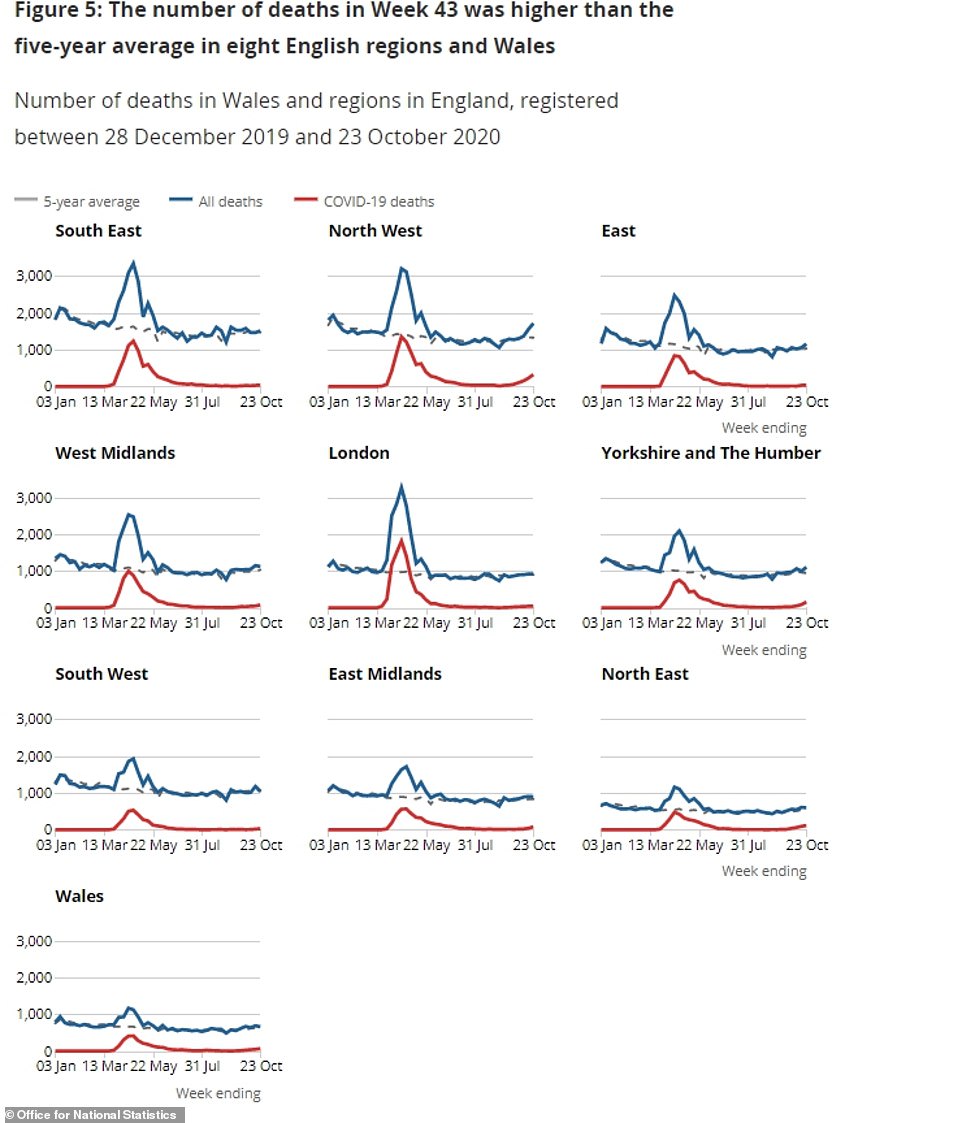 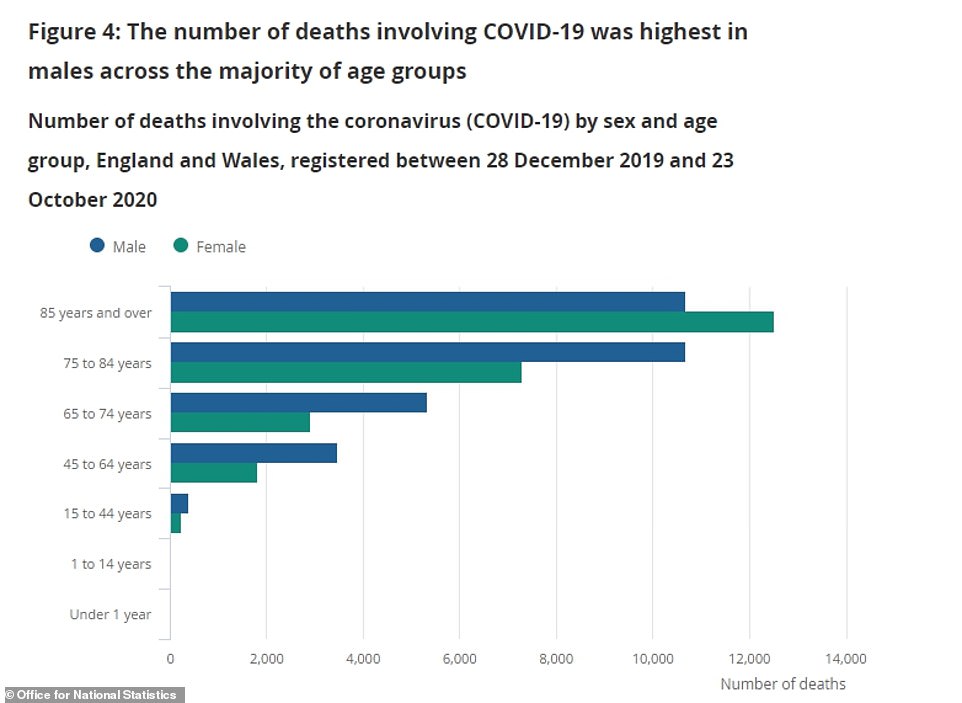 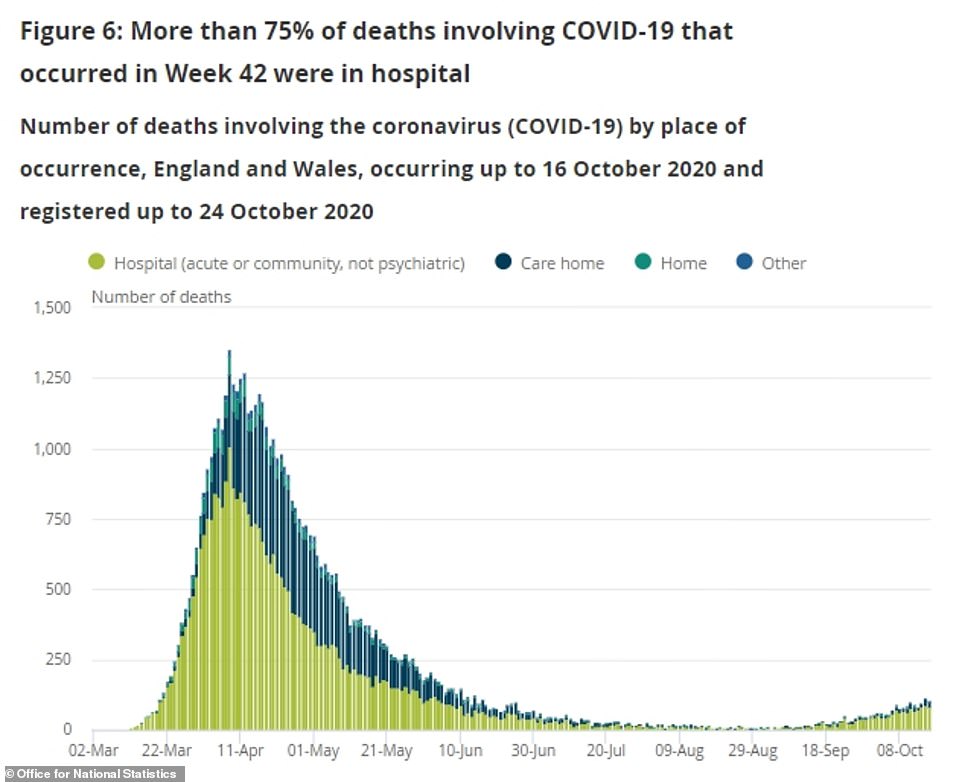 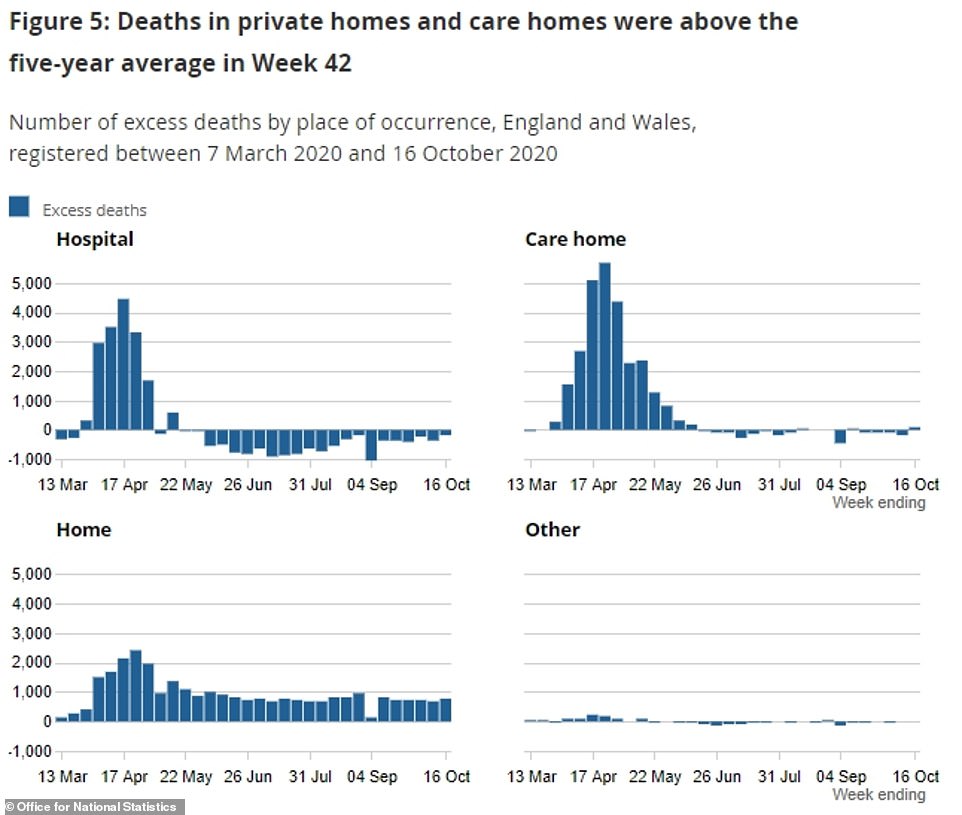 The number of deaths involving Covid-19 increased in all of the English regions, with the North West having the largest number (325 deaths).

HAS ENGLAND JUMPED THE GUN WITH A SECOND LOCKDOWN?

Fears England may have jumped the gun with a second national lockdown grew today after leading scientists claimed the R rate has already dropped to the crucial level of one and that Covid-19 cases are actually ‘flatlining’.

King’s College London academics, who have been tracking the size of the coronavirus outbreak since the summer, said cases were now ‘plateauing’ and there was a ‘slight fall’ in new infections across the UK in the last week.

Professor Tim Spector, the lead scientist behind the KCL study, revealed the latest R rate estimate on Twitter today, hailing it as ‘good news’. The new data could be evidence of England’s three-tier lockdown system starting to take effect and will put greater pressure on Boris Johnson to pause the national shutdown on Thursday.

And he slammed the graphs the Government’s top scientific and medical adviser used to justify England’s second lockdown in the gloomy TV briefing announcing the lockdown Saturday night, insisting they were misleading with one ‘proven to be incorrect’.

One, which suggested there could be up to 4,000 deaths per day by December, was ‘mathematically incorrect’ and should not have been used, he claimed.

Sir Patrick Vallance and Professor Chris Whitty have come under fire for gloomy slides they presented in the press conference at the weekend, and will today be grilled by MPs on Parliament’s science committee this afternoon to justify the evidence for another national lockdown.

Meanwhile, Britain yesterday recorded its lowest number of daily Covid infections for a fortnight on the same day Boris Johnson desperately tried to convince Tory MPs to back a draconian second lockdown.

Department of Health figures showed 18,950 people tested positive for the disease, which was down 9.3 per cent in a week and the lowest since Monday, October 19 (18,804). The UK also saw another 136 coronavirus deaths — a rise of 33.3 per cent on the 102 lab-confirmed fatalities posted last week.

Top scientists said the infection data could be evidence of England’s three-tier lockdown system starting to take effect, by cutting down the speed of growth in the North. It raises questions about whether Number 10 jumped the gun with a second national shutdown, which SAGE warned was needed to save Christmas.

Based on a statistical model that allows for the time taken for deaths to be registered, the ONS estimates that the number of deaths actually occurring in the week ending October 23 in England and Wales was between 9,750 and 12,097.

The number of deaths registered in the entire UK in the week ending October 23 2020 was 12,292, which was 1,222 deaths higher than the five-year average and 364 deaths more than the previous week.

Of the deaths registered in the UK in the week ending October 23, 1,126 deaths involved Covid-19, 365 deaths higher than the previous week.

The latest Care Quality Commission (CQC) figures reveal Covid-19 accounted for 8.7 per cent of all care home deaths in the most recent week, rising from 4.5 per cent a fortnight earlier.

The North East, North West and Yorkshire and the Humber — which are bearing the brunt of the second wave — are where the bulk of Covid-19 fatalities are occurring.

There has been 262 deaths in those three regions since the beginning of October, which is two-thirds of the total across England.

Hotspot cities have been disproportionately affected in that time. Sunderland has had 37, Darlington 19, Lancashire 18, Gateshead 14 and Liverpool 13.

It comes after Matt Hancock was warned he must continue to allow visits into care homes during the second lockdown.

In a letter signed by 60 organisations, leaders of the National Care Forum (NCF) urged Matt Hancock not to impose a blanket ban on all visits, which was the case during the first national shutdown.

They said isolating elderly, vulnerable people – who often have dementia – from their families risks deteriorating their health further and sending them to an early grave.

Under current guidelines, residents are allowed one designated visitor who is tested and provided protective equipment every time they enter the home.

The Government has told providers to ‘follow existing guidance’ until Thursday, when an announcement about the ins and outs of the new lockdown will be made.

The NCF said banning visits during the first wave was ‘intrinsically harmful’ and caused families ‘extreme anguish’, though it admitted it was justified because little was known about the virus.

But, with more knowledge about the disease and how it spreads, as well as increased testing and PPE, ‘homes are much better equipped now to manage any risk’.

Caroline Abrahams, charity director of Age UK, told The Times: ‘Care homes cannot be hermetically sealed off from their local populations so it’s all our responsibility to help them keep this horrible virus at bay through how we ourselves behave in our daily lives.

‘If deaths in care homes are now rising quite fast, as these figures suggest, it is likely to be because rates of transmission of the virus are also increasing rapidly in the local communities where they are based.

‘This makes it more important than ever that care homes get all the PPE and access to testing that they need, so they can do everything possible to keep their residents and staff safe.’ 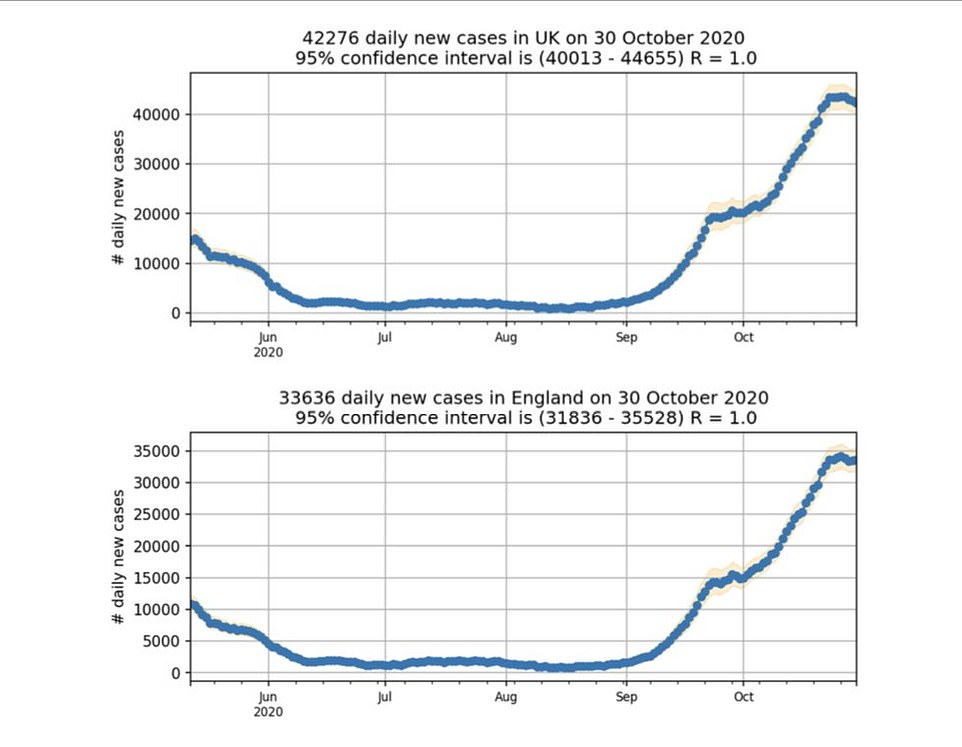 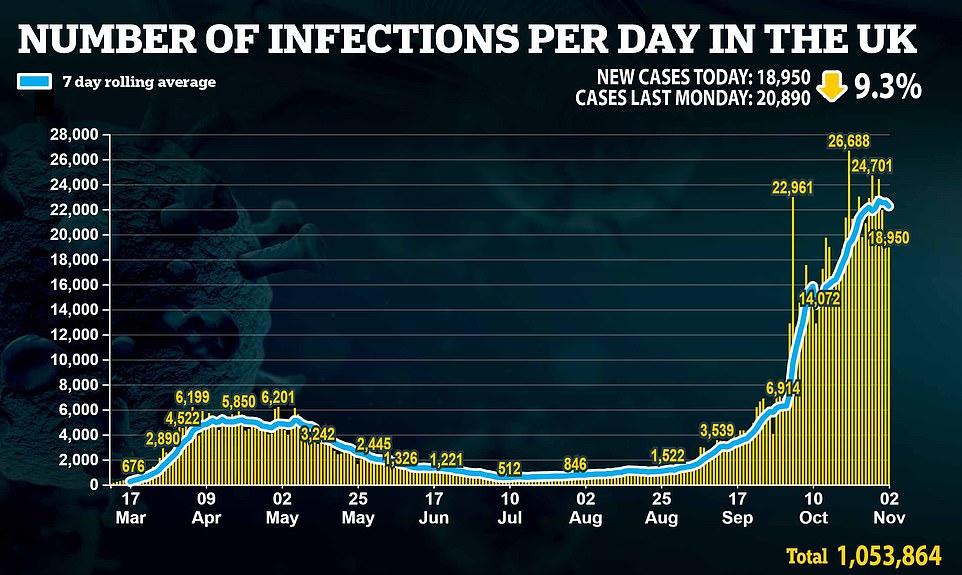 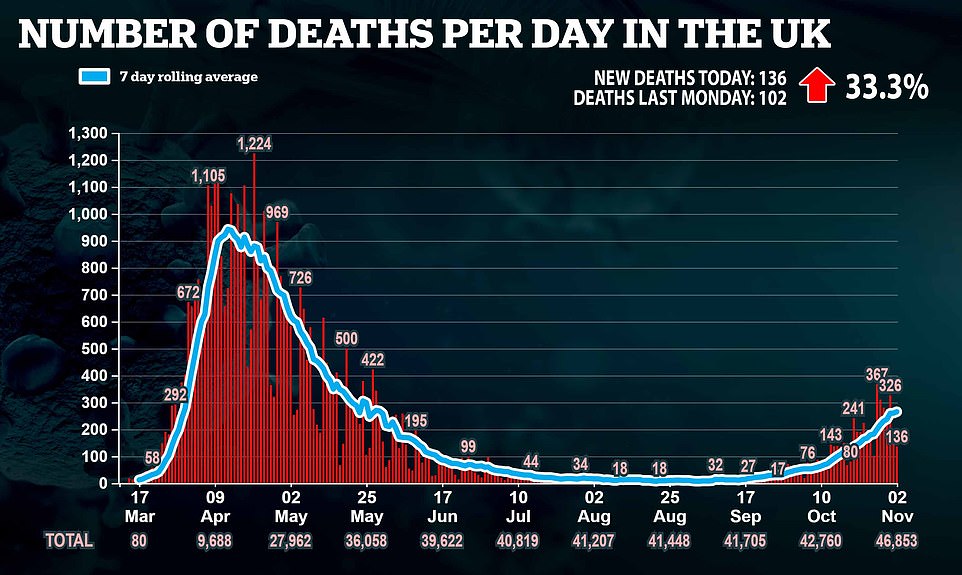