As Britain and America start to draw up plans for life after the lockdown, they may look for inspiration from European countries where the coronavirus crisis has already showed signs of peaking.

Austria today became the first country to set out detailed plans for ending the standstill, with smaller shops re-opening on April 14 and larger ones on May 1.

Denmark also plans to start lifting restrictions after Easter, but wants people to ‘work in a more staggered way’ to avoid crowding into trains and buses.

Meanwhile Germany is willing to re-open schools on a regional basis and allow a limited number of people into restaurants if the infection rate stays sufficiently low.

In Italy, which has been under lockdown longer than any other European country, officials are talking about a ‘phase two’ where society learns to ‘live with the virus’ by wearing masks and carrying out more tests.

Italy and Germany are among the countries looking at smartphone tracking, which could allow them to jump on new outbreaks without sending everyone back inside.

All of those countries, along with Spain, have seen signs of improvement in their recent figures which offer hope that the crisis is past its peak. That moment is still to come for Britain and America, which are bracing for one of their bleakest weeks.

However, health officials across Europe warn that life cannot go back ‘from 0 to 100’ immediately and many lockdown measures will remain in place for several more weeks at least.

Spain plans more tests and a partial return to work

Spain’s daily infection count has fallen sharply from its peak, and today’s rise of 3.3 per cent is the smallest yet

Spain has been in lockdown since March 14 as it battles one of the world’s worst outbreaks, with the total caseload now higher than in Italy.

However, the rate of new infections has fallen to a record low, offering hope that the measures are working.

Prime minister Pedro Sanchez has said that some economic restrictions could be lifted after Easter, allowing some people in non-essential jobs to return to work. 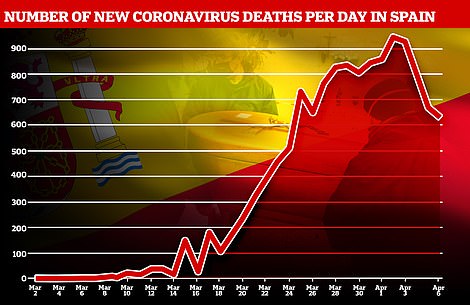 This chart shows the daily number of deaths in Spain, which has similarly shown signs of coming down from a peak recently

However, shops, bars and restaurants will remain closed, and many lockdown measures are likely to last beyond their current deadline of April 26.

Nadia Calvino, the economy minister in Sanchez’s government, told El Pais that ministers have begun discussing a way out of the lockdown.

‘We will have to establish measures and conditions that minimise the risk of having an extended contagion, which will allow us to keep the virus at bay. It cannot be a 0 to 100 process in one day,’ she said.

Calvino declined to answer whether workers would have to return to their jobs wearing masks and gloves.

The government says one million testing kits were due to arrive in Spain on Sunday and Monday, and would act as ‘rapid screening’ in places such as hospitals and nursing homes. 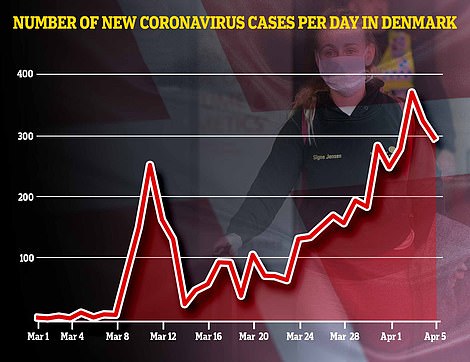 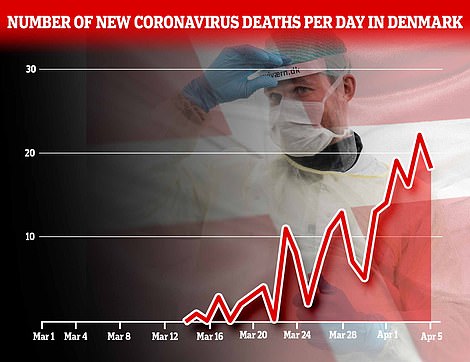 This chart shows the daily number of deaths, after Denmark registered its first fatality on March 14

Denmark has been in lockdown since March 11, but wants to start lifting the measures after Easter if there is no surge in new cases.

In an interview with DK last night, prime minister Mette Frederiksen said the government was hoping for a ‘gradual, controlled and quiet reopening of Denmark’.

She suggested that people could go to work ‘in a more staggered way’ in order to avoid excessive crowds on public transport.

However, she warned that ‘we will not return to Denmark as it was’ when the first restrictions are lifted.

‘We are not going to be able to squeeze up close together in trains, buses and subways in the way we have become accustomed to,’ she said.

‘Or stand very close together with a whole lot of other people and have a good party together.’

The Danish government ordered the closure of schools, day cares, restaurants, cafes and gyms when the lockdown began, and shut all borders to most foreigners.

There are fears that a deep recession could cause more damage to Denmark than a second virus outbreak. ‘The situation we are in is far more complicated than appreciating human life,’ Frederiksen said last week.

Nonetheless, some business owners have voiced fears that re-opening after Easter would be too early and could actually delay a return to normal if the contagion returns. 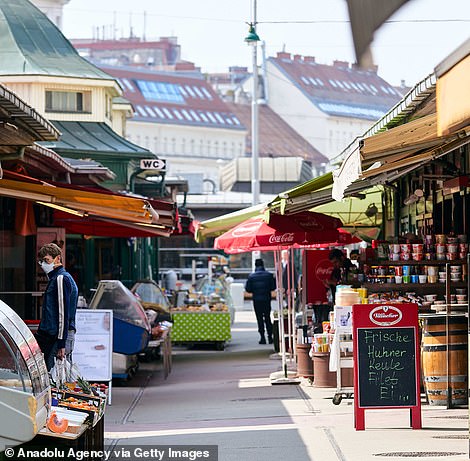 Kurz said the aim was to let smaller shops re-open as soon as April 14, with larger ones and shopping malls opening on May 1 if all goes well.

‘The aim is that from April 14… smaller shops up to a size of 400 square metres, as well as hardware and garden stores can open again, under strict security conditions of course,’ Kurz said at a press conference.

Customers will be required to wear masks when shops re-open, extending a requirement which already applies to supermarkets. Masks will also be compulsory on public transport.

Hotels and restaurants could start to re-open in mid-May, with a decision later this month. Schools will remain closed until mid-May and public events will remain banned until the end of June, Kurz said.

Austria’s health ministry says the rate of new infections has fallen significantly, and Kurz wants to ‘gradually and cautiously return to normality after Easter’ as long as ‘we all remain disciplined during Easter week’.

If the numbers get worse again, the government ‘always has the possibility to hit the emergency brake’ and re-introduce restrictions, he said. 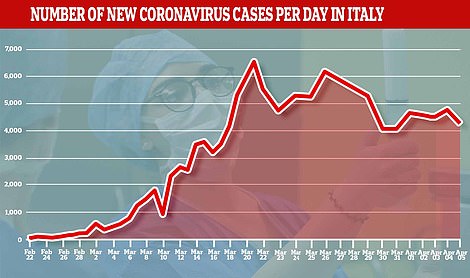 Italy is openly talking about a ‘phase two’ in which society will have to ‘create the conditions to live with the virus’ until a vaccine is developed.

Health minister Roberto Speranza says more testing and a beefed-up local health system would be necessary to allow an easing of the lockdown.

He said social distancing would have to remain in place, with more widespread use of personal protective equipment such as face masks. 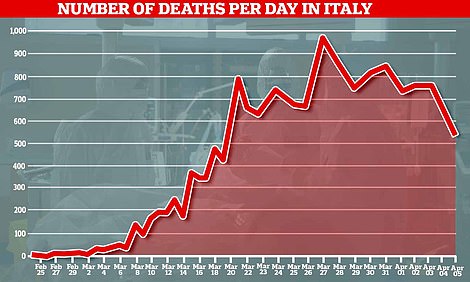 Italy recorded 969 deaths in one day on March 27, but the figure has fallen since then, as shown on this graph

Testing and ‘contact tracing’ would be extended, including with the use of smartphone apps, in order to contain new outbreaks.

A network of hospitals would also be set up which are specifically dedicated to virus patients, after doctors on existing wards described having to make life-or-death decisions over access to intensive care.

‘There are difficult months ahead. Our task is to create the conditions to live with the virus,’ at least until a vaccine is developed, the health minister told La Repubblica newspaper.

The national lockdown, strictly limiting people’s movements and freezing all non-essential economic activity, will officially last until at least April 13 but it is widely expected to be extended. 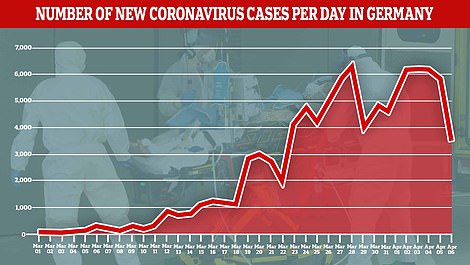 Germany has set out plans to lift restrictions as long as the infection rate remains below 1. That means each patient is infecting less than one other person on average.

If that is achieved, schools could be re-opened on a regional basis, shops could open their doors and restaurants could open with a limit on the number of people in closed rooms. 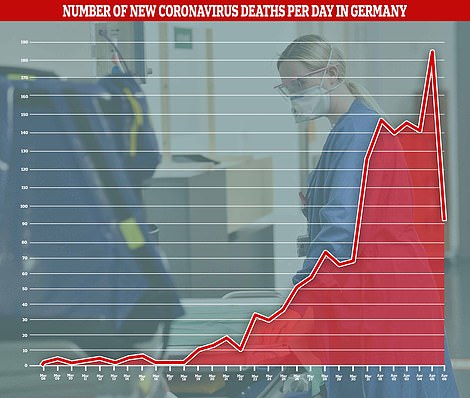 The plans were set out in an interior ministry document which also says that masks may become compulsory in any public building or on trains and buses.

However, Angela Merkel warned today that restrictions will be lifted ‘step by step’, saying she was not yet willing to put a date on it.

The interior ministry separately announced plans today to put all arriving travellers in quarantine for 14 days, though not including health workers who live nearby.

Germany is also among the countries to suggest that antibody tests could signal a way out of the lockdown, by allowing people with immunity to leave home.

These so-called ‘immunity passports’ could allow people to return to work and travel around Germany without fear that they will spread the virus.

Christian Drosten, the head of virology at Berlin’s Charite hospital, says the tests could also ease the supply of medical equipment, because doctors who are immune would need less protective gear. ‘These tests are the only practical way to get things back to normal,’ he told an NDR podcast recently.

Ministers are also looking to South Korea as a model for how to use smartphone tracking, despite the tough privacy laws in Germany where surveillance is a sensitive subject.

One German institute is developing an app that would enable the proximity and duration of contact between people to be saved for two weeks on phones anonymously and without the use of location data.

Chancellor Angela Merkel has said she will recommend the use of tracking apps if tests on them prove successful.

France says lockdown cannot happen ‘in one go and for everyone’ 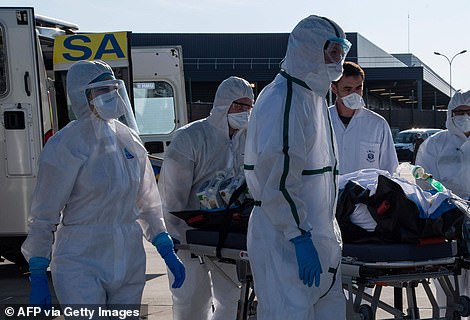 France appears less close to ending the lockdown, with the figures improving less clearly than in Italy or Spain.

Deputy interior minister Laurent Nunez has warned that ‘the end of confinement is not yet on the cards, a deadline has not been set’.

‘I remind you of the rule… one goes out only when it is strictly necessary,’ he said.

Questioned about the subject last week, prime minister Edouard Philippe warned that the lockdown could not be lifted in one stroke.

‘It is likely that we are not heading towards a general deconfinement in one go and for everyone,’ he told parliament by video link.

Philippe said the government is ‘fighting hour by hour’ to ward off shortages of essential drugs used to keep patients alive in intensive care.

Statistics office Insee said last month that the lockdown has slashed overall economic activity by 35 per cent, and estimated that every month of shutdown would cut annual GDP by three percentage points.

Services, heavy industry and construction are all taking big hits, Insee said, as factories are shut and only a handful of business sectors, such as supermarkets and pharmacies, remain open. 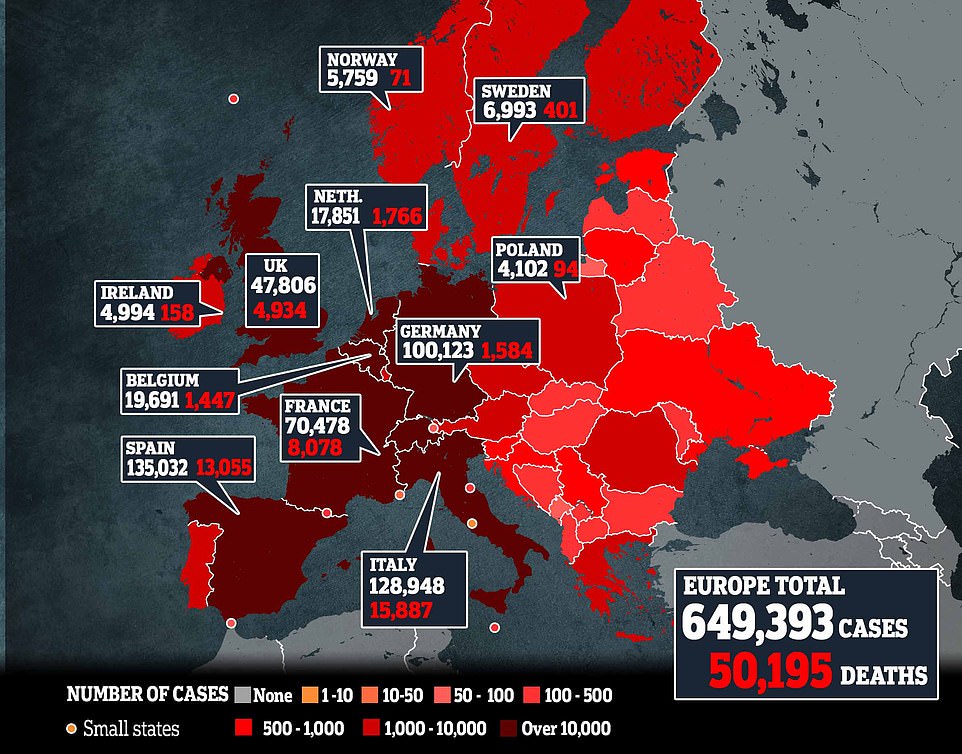 This map shows the latest number of cases in Europe, with Spain’s total caseload now higher than Italy’s, although the Italian death toll is still larger