Coronavirus contact tracing staff have posted patients’ confidential data in Facebook and Whatsapp groups, it has been reported.

Screenshots containing the names, NHS numbers, contact details and case IDs of people who tested positive for the virus were shared, reports the Sunday Times.

Staff were sharing the screenshots while appealing for help navigating the computer system.

It is the latest blow to Matt Hancock’s contact tracing system, which was rushed out of the gate before it was ready and is still failing to get in touch with all those that tested positive.

Since May 28 NHS tracers have failed to get hold of 24 per cent of those that tested positive.

Screenshots containing the names, NHS numbers, contact details and case IDs of people who tested positive for the virus have been shared by contact tracers. (stock)

One screenshot posted by a team leader on a Facebook group with more than 800 members revealed a patients ID number.

Another, shared by a clinical contract tracer, showed the names and phone numbers of patients who had tested positive.

She uploaded the image to a Whatsapp group with the comment: ‘No idea what to do next’.

There are at least three groups for contact tracers on Facebook, which together have thousands of members.

One tracer, who did not wish to be named, told the Sunday Times that tracers are joining the groups because ‘the training is shambolic and the (contact tracing) system is a disgrace’.

Data protection campaigners have slammed the breaches as ‘alarming’ and ‘suggesting the most basic training and confidentiality standards are inexcusably missing’.

‘As the government builds ever growing databases and surveillance systems in response to the pandemic, these serious data breaches are yet more proof of the risks to the public.

‘Contact tracing relies on public trust to work but trust is being lost by the day.’

The Department of Health said there are internal systems that allow tracers to call team leaders and clinical leads for advice, although it appears this is not always taken up.

A spokesman said: ‘We have more than 2,700 contact tracers in place who have all been fully trained and we continue to develop and strengthen the support we provide them.

‘It is clear in their employment contracts that contact tracers should not share confidential details, including on social media.’ 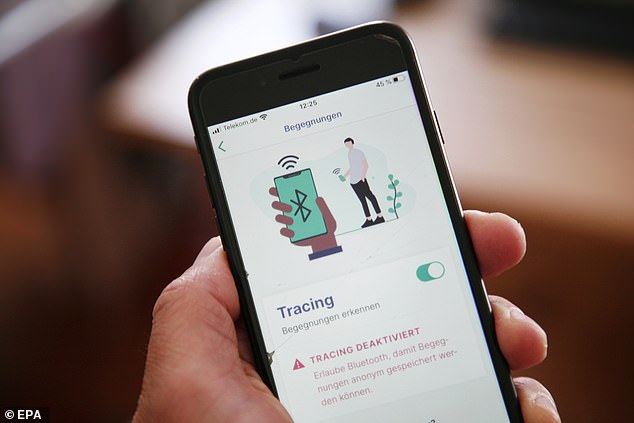 The fiasco comes after Serco – which was brought in to recruit staff – shared the email addresses of almost 300 contact tracers in May.

They were revealed in an email to staff about training, when all addresses were put in the CC section instead of the blind CC section.

A Serco spokesman said: ‘An email was sent to new recruits who had given us their permission to use their personal email adresses.

‘In error, email addresses were visible to other recipients. We have apologised and reviewed our processes to make sure that this does not happen again.’

Details for the track and trace system between June 18 and June 24 reveal 75 per cent of people who tested positive were reached and asked to provide details of their recent contacts.

Coronavirus incidence in the UK is believed to have dropped to six per 10,000, according to the Office for National Statistics.