Covid-19 may be able to infect the brain because it carries a protein capable of getting through the barrier at the top of the spinal cord, a study suggests.

University of Washington researchers found the virus’ spike protein, which it uses to latch onto human cells, can cross the blood-brain barrier in mice, taking the virus with it.

They believe the same process may happen in people, which could explain some of the coronavirus’ more unusual symptoms, such as headaches, brain fog and even seizures.

When a person becomes infected with Covid-19, their immune system targets and attacks the spike proteins, which can cause inflammation because sometimes healthy tissue gets damaged in the process.

Covid-19 normally targets the lungs and respiratory tract, which is why the most common symptoms are coughs and shortness of breath and why many critically ill patients need mechanical ventilation.

However, the Washington researchers believe the spike proteins are also seeping into the brain in some patients and causing inflammation. They warned the neurological damage ‘could last for a very long time’.

This wouldn’t be a unique phenomenon, as many HIV patients suffer similar cognitive issues due to a protein let off by that virus.

Covid-19 may cause long-term neurological problems because it carries a protein capable of entering the brain, a study suggests 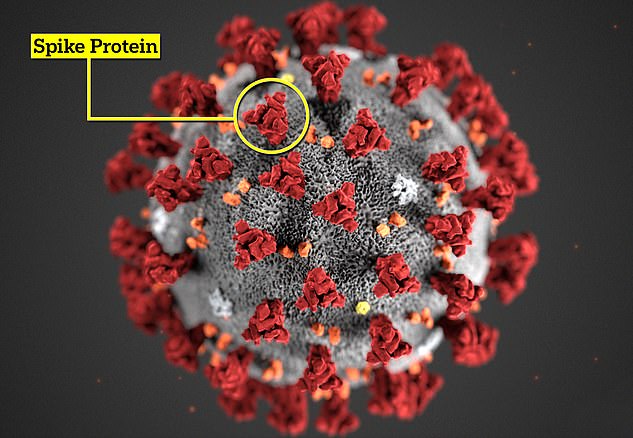 University of Washington researchers found the virus’ spike proteins, which it uses to latch onto human cells, can cross the blood-brain barrier in mice

Lead researcher William Banks, professor in medicine at the university, said the similarities between HIV and Covid on the brain ‘was like déjà vu’.

He added: ‘The S1 [spike] protein likely causes the brain to release cytokines and inflammatory products.

‘We know that when you have the COVID infection you have trouble breathing and that’s because there’s infection in your lung, but an additional explanation is that the virus enters the respiratory centers of the brain and causes problems there as well.

Covid-19 can cause PARALYSIS in children in rare cases because the coronavirus can infect the spinal cord, study finds

Coronavirus infection can cause paralysis in children in very rare cases, a study reveals.

Researchers at the University of Manchester looked at neurological symptoms in 38 unusual cases of Covid-19 in under-18s.

SARS-CoV-2 has previously been found to cause neurological issues in adult patients, with delirium and strokes among the reported problems.

But there has been very little scientific research into the neurological implications of Covid-19 in children.

A total of 38 children who tested positive for the infection were assessed in the specialist study who had been admitted to hospital across eight countries.

The cases were found after a global call for unusual Covid cases in children was put out by the American Society of Pediatric Neuroradiology.

Thirteen came from France, eight from the UK, five from the US, four from Brazil, four from Argentina, two from India, one from Peru and one from Saudi Arabia.

All had MRI scans after developing symptoms of some form, ranging from a standard fever to problems moving their extremities and impaired cognitive function.

Eight of the children had no respiratory symptoms such as shortness of breath or a cough, as is typically associated with Covid-19.

Four children in the study died after contracting another infection, such as TB and MRSA, after Covid-19 had made them more susceptible.

And two of the youngsters in the study were left paralysed after the virus reached their spinal cords and caused inflammation.

‘You do not want to mess with this virus. Many of the effects that the Covid virus has could be accentuated or perpetuated or even caused by virus getting in the brain and those effects could last for a very long time.’

The study, published in Nature Neuroscience, may explain why so many patients even with mild illness report feeling fatigued months after clearing the infection.

Professor Banks and his team’s research focus had been on the blood-brain barrier and its role in Alzheimer’s disease, obesity, diabetes, and HIV.

But they focused all of their efforts on studying the coronavirus spike protein in April.

Slight inflammation can happen when the body fights off any viral infection, including Covid-19.

But in some people – particularly the elderly and those with underlying health conditions – their immune systems go haywire while trying to clear Covid-19 in the body.

The cytokine storm is believed to be one of the common causes of mortality in the the Covid-19 pandemic, inflicting damage on the heart, liver and kidneys.

Abnormal blood clotting, causing heart attack and stroke, has also been highlighted as a significant cause of death in Covid-19 patients.

There is not a clear figure for the proportion of hospitalised patients who experience the cytokine storm.

Experts have been warning of serious neurological woes involving lasting damage to the brain and nerves caused by Covid since late spring, as more survivors reported lingering cognitive symptoms.

A UK-wide alliance was created over summer to monitor such cases: CoroNerve — the National Surveillance Programme for Neurological Complications of Covid-19.

It involves both the Association of British Neurologists and the Royal College of Psychiatrists.

Researchers are still trying to understand what is causing ‘long Covid’, the broad terms given to a wide-range of symptoms which linger months after the original illness has cleared up.

The Office for National Statistics says one in five Covid survivors suffer persistent symptoms after five weeks of clearing the initial infection, with the most common being fatigue, a persistent cough and headaches.

Researchers believe these symptoms are the ‘after-effects’ of the coronavirus, due to damage caused to the organs, immune and nervous systems.

Doctors have likened it to post-polio syndrome, a poorly understood condition which can develop more than a decade after the initial infection.

Officials remain clueless as to exactly how many people currently have long Covid — but campaigners say it could be up to 500,000 in the UK.