Dozens of police are preparing to shut down a planned anti-lockdown protest in Sydney if it goes ahead as planned.

NSW Police arrived at Sydney Park, St Peters, in at least five busloads on Saturday morning and were ready on cycles and on foot to prevent demonstrators massing, as a police operation blocked several roads leading to the CBD.

The police presence surrounding the CBD was described as a ‘ring of steel’, the phrase used throughout the pandemic to describe operations preventing unwanted movement of the public along major roads.

NSW Police arrived at Sydney Park, St Peters, in busloads on Saturday morning and were ready on cycles and on foot to prevent demonstrators massing, as a police operation blocked several roads in the area 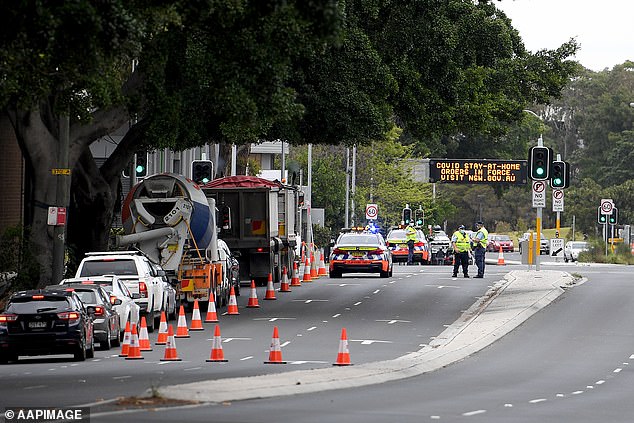 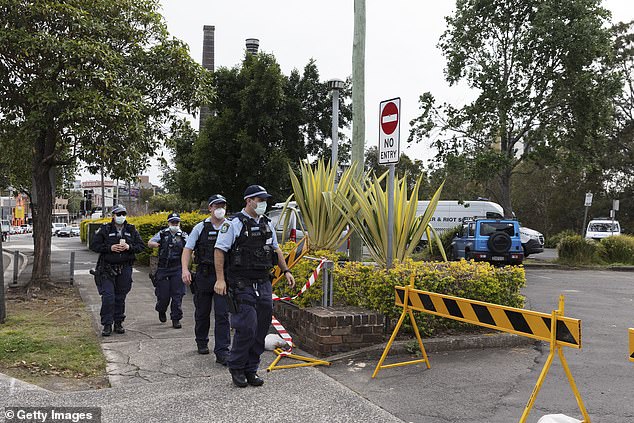 NSW Police hit the streets on Saturday morning, gathering at Sydney Park, but also attending Victoria Park and Hyde Park as they tried to stop anti-lockdown protests getting underway

Neighbours and users of the popular park, which is adjacent Newtown and Alexandria, said the heavy policy presence was keeping them home.

Around 10am Saturday one local man tweeted ‘Came to Sydney Park for some recreation with my daughter. There is an insane police presence here! Apparently about a protest happening here later.’

Another local reported police helicopters had been deployed, possibly to identify groups of protesters gathering. 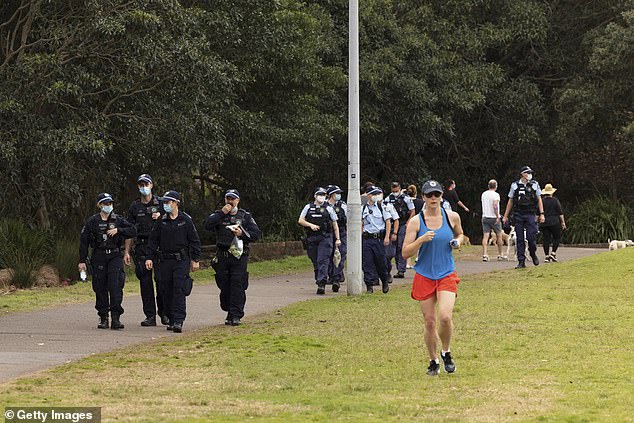 NSW Police were determined to prevent an anti-lockdown protest forming in Sydney on Saturday and focused on Sydney Park, St Peters 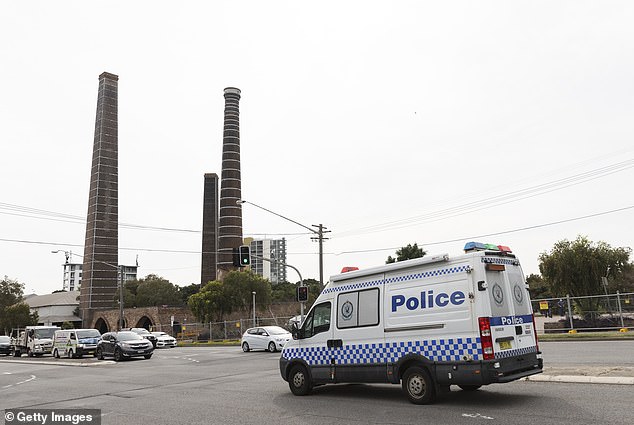 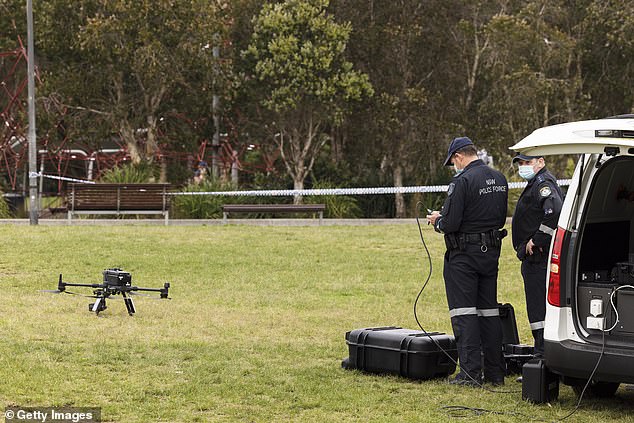 ‘I got 20 cops standing directly across the road from my house having a meeting and can hear the chopper flying overhead,’ he tweeted.

NSW Transport warned the public to follow police instructions when using roads in the area, to be patient as traffic would be slow southbound on Euston Road near the park. 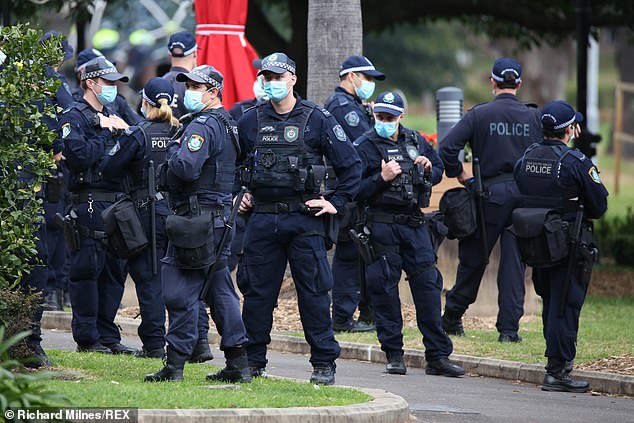 Police also focused on another possible protest site nearby, at Victoria Park, where they managed to break up an anti-lockdown protest before it gained any momentum last month 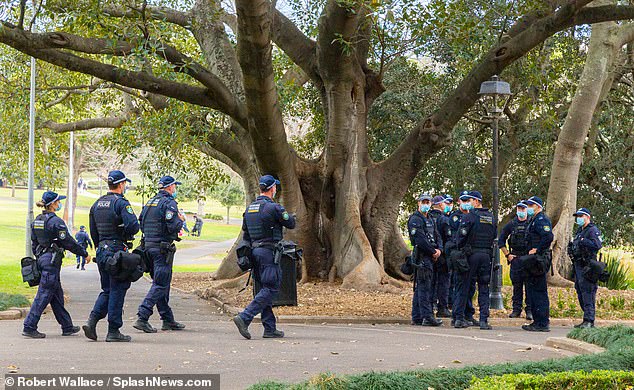 NSW Police action at Victoria Park at the edge of the Sydney CBD, prevented an anti-lockdown protest from achieving a critical mass in late August

NSW Police also focused on another possible protest site nearby, at Victoria Park, where they managed to break up an anti-lockdown protest before it gained any momentum last month.

NSW police promised an equally ‘highly visible’ operation to prevent protesters from gathering in large numbers for another march. 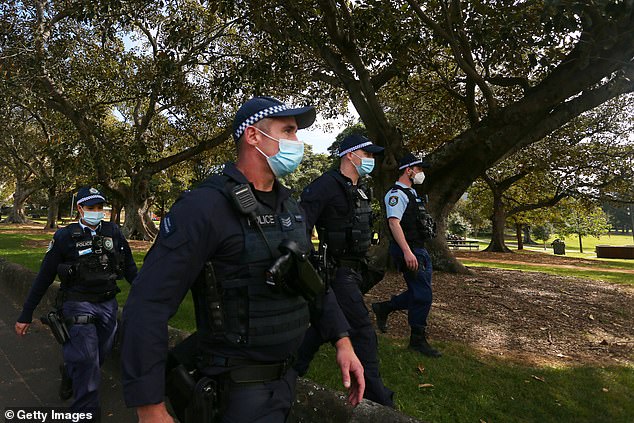 Meanwhile the leaderless anti-lockdown protests in NSW are diverting an enormous amount of police resources that could otherwise be used to help with the COVID-19 crisis.

Last month 1500 police turned out in force in Sydney to quell protests which followed a larger violent protest in the CBD in July.

Mr Fuller told a NSW budget estimates hearing on Wednesday that prior to the COVID-19 pandemic there had been around 1000 protests a year, which were generally peaceful, well organised and with very few arrests.

‘But obviously the COVID protests are very different,’ he said.

Because the anti-lockdown protests were illegal ‘you don’t tend to have protest organisers, you just have a group of people … a rabble if you like turning up’.

‘It’s using up an enormous amount of police resources that could well be used assisting health at the moment,’ Mr Fuller said.

‘I just think people underestimate the risks they take coming together in such big numbers.

‘It just makes no sense – there are so many other ways people can protest at the moment without actually having to turn up.’